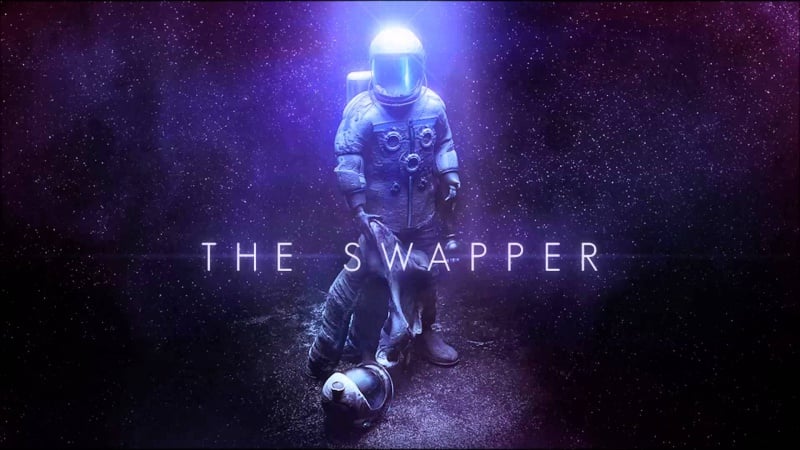 If my clone is the same as me, could it actually be me? And if through negligence or necessity I happen to, say, murder or otherwise cause the bone crumpling deaths of dozens of these reproductions while using a ray gun to move my soul from body to body in the process of trying to escape a derelict spaceship that contains a host of dangerous ancient psychic rocks, should I feel bad about that? Luckily that head-scratcher isn’t a conundrum that needs to be solved in order to play through and enjoy indie developer Facepalm Games’ atmospheric sci-fi puzzle game The Swapper.

Taking place aboard an abandoned research station where something has naturally gone horribly wrong (damn you, space!), The Swapper tasks the player with navigating the labyrinthian corridors by collecting a certain number of glowing orbs in order to unlock and remove obstacles that block the path. These standard video game devices are tucked away in small rooms, in plain view. But nothing is as easy as it seems, and actually figuring out how to reach the well-placed spheres comprises the majority of the experience. To help, the player is almost immediately given the only device they will need to see the end, the swapper gun. This tool does two things: create and place up to four clones of the main character that mimic the original’s exact movements, and swap the “soul” of the protagonist into one of the copies, giving the player direct control. If it sounds complicated, it’s not. In fact, it’s brilliant in its simplicity, and by keeping the concept straightforward, Facepalm was able to concentrate on constructing clever brain-teasers, which is, of course, The Swapper‘s main draw after all.

Figuring out the right positioning of clones and timing the perfect swap so as to avoid (at least your own) painful death makes you feel like a genius, though I guess it’s too bad some poor sap of a clone had to bite it along the way. I guess… In any case, the mechanics are easy to pick up and put to great use. It’s the kind of game I can see going back to (once enough time has passed for me to forget the solutions) simply to enjoy the gameplay some more.

The game progresses nicely in difficulty, easing the player into thinking about puzzles differently, adding a few wrinkles here and there. Red lights prevent swapping, blue lights prevent cloning, and purple lights negate both abilities. Most rooms have a combination of one or more of these that pose varying degrees of challenge and force unconventional approaches to the ultimate solutions. Trial and error becomes a part of the experience (resulting in that aforementioned trail of bodies), as you work to arrive at that “aha!” moment and finally see what the developers want you to see. These revelations can result in some facepalming of your own for taking so long, but the triumph is nevertheless very satisfying. Only twice did I get frustratingly stuck, and it helped to step away from the game for a day and return with a fresh perspective. I never considered internet help; the game does a fantastic job of making the solution seem so decipherable it just kept me wanting to come back and figure it out for myself. So proud!

Clocking in at around 5 hours or so, depending on your swapping abilities, The Swapper isn’t exactly long, but it is memorable. The visuals are gorgeously moody, with backgrounds and assets digitized from clay models and lighting that perfectly sets the eerie tone. The music is appropriately spooky, accenting certain moments but never overpowering, and the controls work great with the Wii U gamepad, its screen serving as a helpful map and giving access to various ship logs that are acquired over the journey that fill in the mysterious backstory pertaining to the situation and the setting in general. The tidbits that are provided can be a bit obtuse, right up to and even after the ending, but they can be completely ignored or overlooked without taking away from the enjoyment of the game. For those who are looking for more, however, they do exist, providing some moral dilemmas and hitting a few interesting philosophical notes here and there involving the mind, the soul, and the very nature of existence that ask you to ponder the morality of your actions.