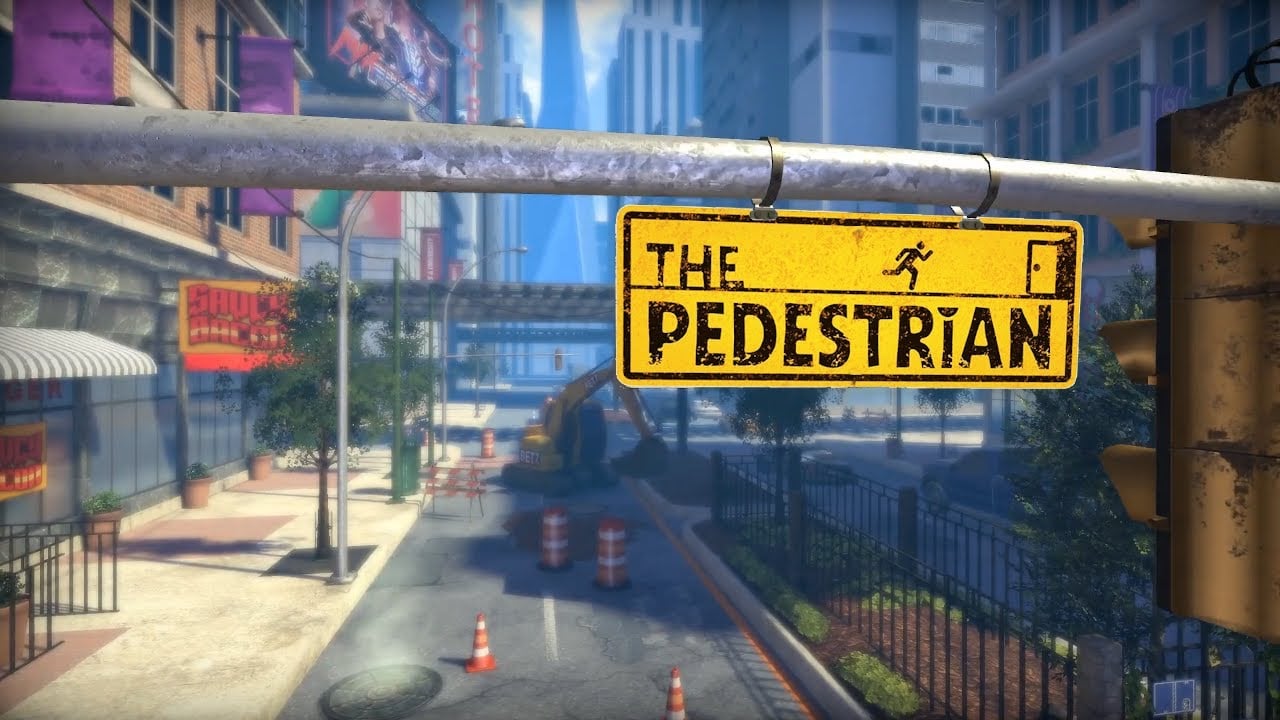 The Pedestrian finds adventure in the everyday. This debut game from Skookum Arts uses signage, a mundane tool we use daily to traverse our environment, as a canvas for its own unique form of traversal, and the result is a smart, satisfying puzzler that successfully iterates on its unique core mechanic.

Springing into existence as stickman or woman, your journey through this 2D world unfolds unnoticed across the humdrum streets and rooftops of a city, with every traffic sign, blackboard, and sheet of paper acting as your very own highway.

Travelling between these signs, however, is not as simple as running from left to right. Ladders and doorways connect every surface, each of which acts as its own room of sorts. Progression thus comes from planning out a continuous route between these modular spaces. Revise your path midway and the signs will reset, sending your stick-person back to that section’s start.

While simple, at least initially, this mechanic feels unique and refreshing and the satisfaction gained from devising your plan — rearranging signs and drawing lines from door to door and ladder to ladder with your cursor — before regaining control of your stick-person and executing your planned path is gratifying.

After working your way through a handful of the puzzles, some simple platforming sections connecting each, The Pedestrian begins to build on its core mechanics and in turn, the purpose of your journey becomes increasingly apparent. Having escaped the warehouse where you were conceived, you find yourself on a large sign amidst a gloomy subway. Sticky notes dotted around its circumference point to a number of paths that tangent off from this hub, while a modified Game Boy, adorned with tape and circuit boards, sits below, wired up to the sign itself.

Each path presents its own isolated cluster of signs, with an essential progression item, be it a crate, a key, or, most importantly, a component to further modify your Frankensteinian device, sitting somewhere within for you to reach and retrieve. The non-linearity these hubs provide often let you approach their selection of puzzle areas in whichever order you choose, lending a welcome sense of freedom to an experience otherwise constricted by the claustrophobic squares and rectangles it plays out on.

While The Pedestrian maintains this methodical structure of exploring hubs and gathering components throughout the majority of its eight stages, it ensures puzzles and pacing alike never wane, iterating on its singular sign-based mechanic in several smart ways. An excellent original score that features an eclectic mix of jazz, ambient, and eastern European music also helps the game’s pacing while conjuring a comforting, Pixar-esque tone that offsets any fleeting frustrations its puzzles may cause.

Laser beams and sawblades, which turn the phrase “hazard sign” quite literal, add a level of danger for your little stick-person to avoid, requiring careful platforming and diligent use of crates and barriers to keep them from harm. The addition of different types of signs introduces extra layers of complexity, changing the way you interact with and arrange the signs themselves.

Initially, signs sporting archways are introduced which allow you to jump through one sign and onto another behind it. Subsequent stages maintain and multiply both hazards and archways while compounding this challenge further. In the game’s latter half, puzzles have you connecting electrical circuits, painting signs yellow to the counter the effects of the reset mechanic, and even intentionally dying and resetting sections of a puzzle several times to open up new paths and approaches.

Not only do these later stages foster a growing sense of cooperation between your disembodied cursor and the running, jumping stick-person it commands, but they successfully unite their respective worlds. The 3D world that acts as a backdrop for The Pedestrian’s 2D puzzle-platforming is nicely rendered; detailed, varied environments and good use of lighting give it a presence that does well to immerse you but it often feels like little more than set dressing.

Thankfully, the game’s final few areas, including a vibrant, neon-soaked rooftop — perhaps the game’s most visually arresting section — links these two planes, culminating in one last surprise that further twists the formula and makes for some of the game’s most engaging, albeit underutilised, puzzles. While the game does concede some rather inconsequential fragments of narrative during this climax, The Pedestrian’s story functions to provide a necessary level of context to your actions and is by no mean detrimental its excellent gameplay and level design.

At roughly 4-6 hours long — depending on just how perplexed you are by some of its tougher puzzles — The Pedestrian is a short, sweet, and thoroughly smart puzzle game that explores and iterates upon its unique premise to great effect.