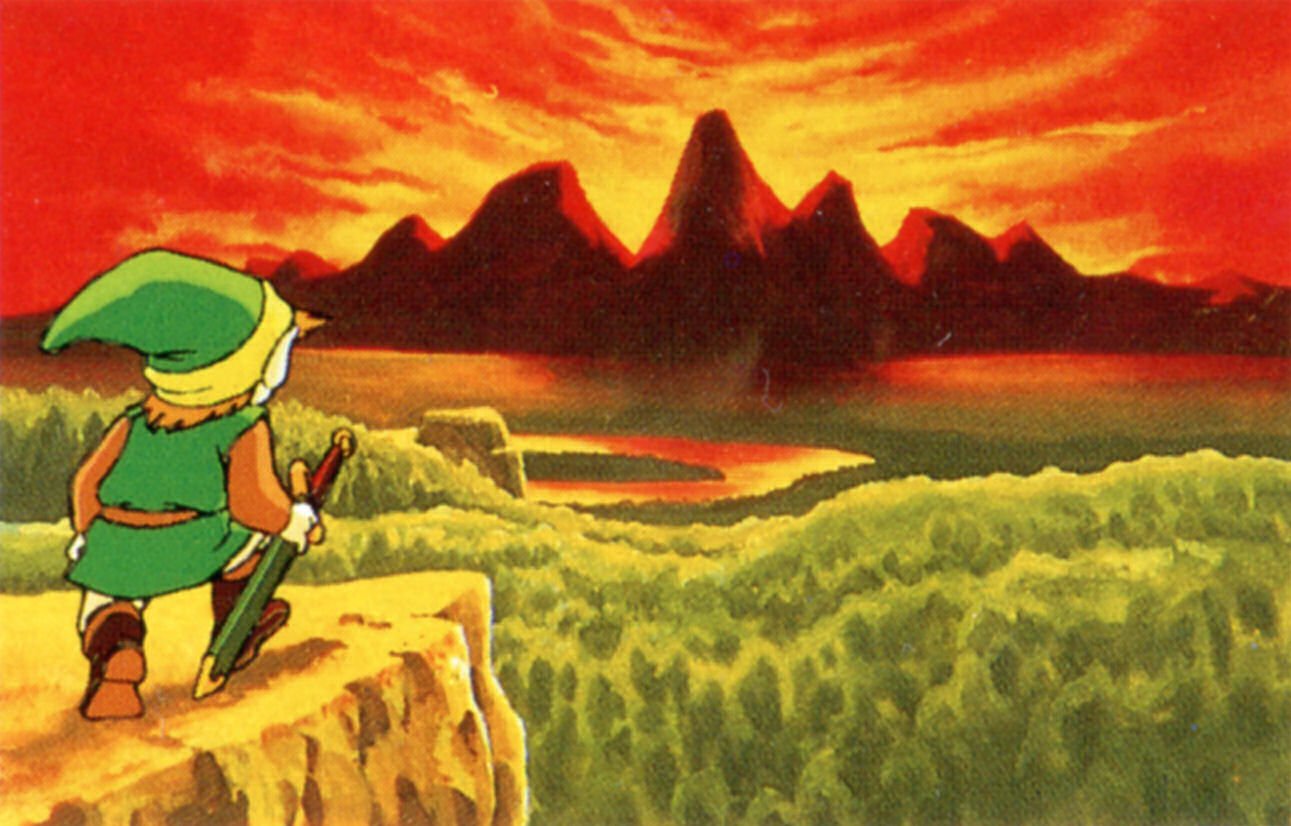 “Can Link really destroy Ganon and save Princess Zelda? Only your skill can answer that question. Good luck. Use the Triforce wisely.”

The Legend of Zelda’s manual isn’t just throwaway reading material, it’s an essential component to understanding the game. Design priorities have shifted with time, but the first Zelda relying on its manual so intimately is not a flaw and never was– it’s simply reflective of its era. Video game manuals aren’t as common as they used to be, but The Legend of Zelda coming with a manual in 1986 is no different than a board game coming with instructions today. There was only so much space on a Famicom Disk Card, and a game as conceptually sophisticated as The Legend of Zelda naturally wouldn’t be able to parse all its key information in-game. In fact, one read of the manual is really all it takes to recognize that many of Zelda’s obscurities are anything but.

For what it’s worth, The Legend of Zelda’s opening does offer some basic information along with laying down story context. Ganon stole the Triforce of Power, Princess Zelda broke the Triforce of Wisdom into 8 units, and it’s on Link’s shoulders to save Hyrule. There’s a certain charm to how The Hyrule Fantasy details every single treasure in the game through what is essentially a scrolling cast list. The intro even ends by telling the player to look up the manual. The Legend of Zelda is kind enough to offer some narrative breadcrumbs through its demo reel, but it has the sense to use all the tools at its disposal.

Zelda’s manual wastes no time in getting into the meat of the story. The Prince of Darkness, Ganon, has ushered in an era of Chaos for Hyrule. Foreseeing the inevitable, Zelda instructs her nursemaid, Impa, to find a hero courageous enough to challenge Ganon. The Princess is soon imprisoned by Ganon while his forces close in on Impa. Exhausted & surrounded with no means of fighting back, Impa is left at the mercy of Ganon’s minions. Only for Link, a weaponless boy clad in a green tunic, to swoop in and fight off the Prince of Darkness’ forces. Impa rescued, she imparts onto Link the plight of Princess Zelda, beckoning him to become the hero of Hyrule.

Described as “burning with a sense of justice,” Link sets off to rebuild the Triforce of Wisdom and liberate both Princess Zelda & Hyrule from Ganon’s clutches. The rest of the manual is framed through the actual message Impa left Link. Impa specifically detailed Hyrule’s history, along with the layouts of the nine labyrinths Link will need to brave– the latter of which appear together in a cute & crude drawing featured later in the manual (hand-drawn in-universe by none other than Link.) It’s no Final Fantasy (or even Dragon Quest,) but the manual does a good job in making The Legend of Zelda’s plot a little bit compelling. There’s no real emotional or character nuance, but it’s a classic fantasy premise laid out well with just enough dramatic flavor.

The rest of the manual is framed like a children’s fantasy story, conveying conceptual gameplay mechanics through the text. Link has to meet shopkeepers in caves because they’re hiding from Ganon’s monsters; Springs are referred to as a home to fairies & other secrets (a cheeky hint at Level 7’s hidden entrance;) and multiple pages are dedicated to explaining basic dungeon design– from outlining the emphasis on puzzles & riddles within labyrinths, to ensuring players they haven’t done anything wrong when all the doors lock in around Link. It’s easy to take for granted, but gaming was still a young medium at this point and there was nothing quite like The Legend of Zelda.

It’s for this exact reason the manual goes over the literal controls in such a meticulous fashion. A attacks with the sword, B attacks with items, the D-Pad moves link, Start opens the menu and Select pauses. Basic wisdom, indeed. The act of opening the menu and equipping items is also detailed in a highly sophisticated fashion, far more so than it needs to be. The manual even suggests that quickly being able to switch between items is the key to success in combat. While reflexes do play a role during battle, the in-menu tension the manual pitches are pure fiction. If nothing else, it’s a nice way of teaching newcomers how to understand not just the game, but video games as a whole. Reading The Legend of Zelda’s manual puts one in the right puzzle-solving mindset to competently save Hyrule.

Considering his silent protagonist status, it might surprise some that Link was a defined character all the way back in the original Legend of Zelda. All the same, the intent was always for players to see themselves as Link. The manual even goes over the intimacy of creating Link. When booting up the game for the first time, Link does not exist. It’s only until you register your name that Link is given life. It’s fascinating how something as basic as naming a file after yourself speaks to the interconnectivity inherent to the medium. You may not be Link, but he’s your Link created to be your namesake.

Beyond laying a narrative foundation & dishing out gameplay concepts, the manual serves the practical purpose of simply functioning as a proper manual and offering helpful advice. Players are warned that some enemies can only be defeated with the Bow & Arrow– hinting at Gohma & nudging players to purchase the Arrows. The Triforce chart helps players know which Levels they’ve beaten at a glance, perfect for anyone doing dungeons out of order (and there will be many.) There’s even a step by step guide to reaching Level 1, offering direction in an otherwise directionless game. As an added bonus, the general vicinity of Level 2 gets its own page for anyone still in need of early game assistance.

That said, the real pièce de résistance is the partially filled out map in the back. Roughly 2/3rds of Hyrule is pictured in an easy to read & understand fashion. The first 4 Levels are all located on the map; secrets containing Heart Containers, bombable walls, & movable stones are marked with question marks; and there’s even an item checklist at the bottom. Best of all are the enemy tips to the side, offering insight on which enemies drop bombs & which drop Rupees. Considering how useful bombs become late-game, it’s nice to know which enemies to farm off.

Given The Legend of Zelda’s reputation as a game that doesn’t hold the player’s hand, it’s interesting to note just how helpful the manual ultimately is. Alongside the item checklist is a separate dungeon item checklist that shows players outright which dungeon holds which item. Levels 3 through 6 feature partial maps showcasing their treasure locations, while Levels 1 and 2 actually feature fully detailed maps that leave little to no room for the imagination. It errs on being too helpful, but The Legend of Zelda’s back half is hard enough where perhaps Nintendo felt this was only fair.

Zelda’s manual withholds the game’s juiciest secrets while guiding you through the more obscure challenges. There are entire gameplay mechanics that go unexplained lest players reference their manual. Ever wonder why an entire room of enemies suddenly vanishes after killing one foe? That’s because they were the Ringleader and their death triggers the death of every other enemy in the room– a concept only conveyed in the manual. Even if you don’t reference the manual as a guide, the gamebook offers valuable story and gameplay context that makes The Legend of Zelda a considerably more compelling experience. There’s a reason the demo reel outright tells players to read their manual: it’s not actually optional.

Of course, things have changed since 1986 and the concept of reading a manual before playing a new game hasn’t been commonplace for some time. Games are often thought of as self-contained entities, and failing to convey vital information in-game is a failure of the game. But this is a notion reflective solely of modern gaming and can’t apply to a title like The Legend of Zelda, a game that presents its manual as a part of the core experience in order to circumvent technical limitations.

The Legend of Zelda is perfectly gripping with or without its manual, but something needs to be said for the relationship video games used to have with their instruction booklets. It’s not an ancillary accessory to the game, the manual is a part of the game. At release, playing The Legend of Zelda the way it was meant to be played meant reading that instruction booklet and diving headfirst into Hyrule with a clear goal in mind. It meant knowing Link would stop at nothing to save Hyrule; it meant understanding where to go, how to get there, and why you’re going in the first place.

One could argue that the manual removes much of Zelda’s mystique– and they wouldn’t exactly be wrong– but in an age where manuals are a rarity, the fact The Legend of Zelda shares such an intimate relationship with its own is in itself notable. Reading Zelda’s manual offers entirely new insight into Hyrule (arguably insight we should have always had,) but it’s also a fun read in & of itself. There’s a charm to the series’ early, almost desolate lore, and seeing mechanics we take for granted taught & laid out in such a methodical manner is almost humbling. It might not be high literature, but it might well be something better: The Legend of Zelda’s manual.

You can view the entire Legend of Zelda manual here.