Video games are no longer a small market. Everyone from their mother to their neighbour plays now, from the simple mobile puzzle game to the vast MMORPG. With the wide array of choices, it can be difficult to find the right choice, especially when compared to the AAA game industry. Most people will only be exposed to the more popular publishers, and in many cases it can be difficult to find an indie creation that excels. In 2011 a small indie-game developer poked their head out into the fray and proved that they could go head to head with the big dogs. This small company is called Supergiant Games, and though they only have three titles under their belt, their newly announced game, Hades, looks promising for many of the same reasons their others succeeded.

The joke that most modern games look alike has been done to death. Popular games for the longest time are fifty shades of grey with twice as many hues of brown. Deserts and post-apocalyptic wastelands reigned, and a hint of colour was nary in sight. Even games like Skyrim, with its blue skies, Aurora Borealis, and lush greenery, still have more grey and black than one would prefer. On top of that, most modern games’ the protagonists resemble a more handsome Nolan North.

Luckily, there’s Supergiant Games. They stand out on their own by trying something new. Starting with their first game, Bastion, they have proven that it is possible to create a prismatic post-apocalyptic world. The creatures that The Kid battles are bright and adorable, and it is painful to smash their cute faces in with an over-sized cartoonish hammer. Each eco system have a distinct style, and it is impossible to find a two-toned environment. 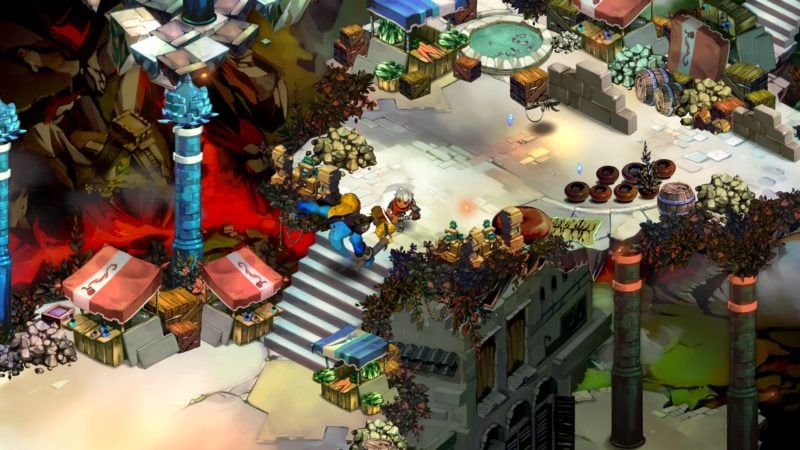 The end of the world never Looked so beautiful

Transistor, their second game came, went a different route, bringing on a cyber-punk vibe. Once again set during cataclysmic events, the creators avoided the typical dull colours of common futuristic cities. The game is inspired by movies like Blade Runner, where though there are dark alleyways, tall buildings, and rain, the world is still lush with colours. The enemies’ white armor stands out against the darker backdrops, and each room is occupied by colourful energy seeping through every crack.

Up next was 2017’s Pyre, which is set in a more traditional fantasy world. Once again, they come straight out with prominent and chromatic colours. The environments are gorgeous, a sublimely bleak world. The antagonists don’t wear the typical black armor or white creepy robes, but instead sport uniforms to suit their personalities, ranging from rock-and-roll wolves to chivalrous and hammy worms. In many ways, the developers found their niche creating prismatic apocalypses, and if they continue to be artistic masterpieces, who’s to argue they should change?

Supergiant also makes musicals. They hired Darren Korb as a composer at the same time they started development of Bastion, and have kept the same team on board since. Music is such an integral part of their development that it wouldn’t be surprising if they write the story to suit the music instead of the other way around. Bastion uses war-songs ingrained in the culture to tell the story of the world, while Transistor has Red, a lounge singer with a damaged voice box, fighting her way through corruption to find freedom. There is even a button to make her hum, and though it serves no other purpose than aesthetics, it proves that music is not just an afterthought.

Meanwhile, Pyre utilizes minstrels as an integral part of the story. These musicians are brought along so they can ensure the rites can be completed properly. Music is so important to the company that they even released the entire soundtrack to the upcoming Hades simultaneously with the early access.

It’s one thing to create a pretty game, and another to include beautiful music. But a game with a bad narrative is detrimental to the story, and Supergiant Games also show that they are masters of the narrative. Games like Mass Effect, Fallout, and The Witcher have enough content to fill a library, and in many cases, multiple playthroughs are required to experience everything. These franchises have been able to create compelling characters and stories that drive players to new, unexplored emotions. Supergiant Games does the same, albeit in a much shorter time. Their games can easily be beaten is less than 10 hours, which gives them a limited amount of time to develop a story, but the decisions the player needs to make in Bastion are meaningful, and the Kid’s relationship with Rucks grows with every explored world. Red’s companion, The Transistor, speaks highly of her and treats her with the utmost respect and care, while Pyre’s odd visual-novel concept requires people to escape limbo by winning a game of 3-on-3 fantasy basketball. In any other hands, the latter might sound absurd, but Supergiant Games pulls it off.

Pyre in particular is overloaded with a a motley crew, characters who have rivals, dreams, and regrets. Everyone one of them wants their own freedom and redemption, and will do anything to achieve it. But after every match, only one member of the winning team can leave. It’s up to the player to decide who shall ascend and who remains. The chosen ones are forced to leave their friends behind to fight for their own chance at hope. Watching them deliver their heartfelt goodbyes couldn’t be more touching, and it leaves a sad lump in my throat. Pyre‘s incredible success suggests that even the rogue-like Hades could have a deep and engaging story.

Supergiant Games are indie darlings. They develop fun games, each with their own distinct gameplay, and create beautiful, iridescent worlds filled with the sweetest of music. They are not afraid to think outside the box and take chances. Pyre may have been difficult to master, and Transistor‘s difficulty curve isn’t perfect. But every entry in their repertoire brings a unique story, gorgeous music, and multi-layered characters. Even though Hades is still in early access, it certainly looks like it’s on the right track.