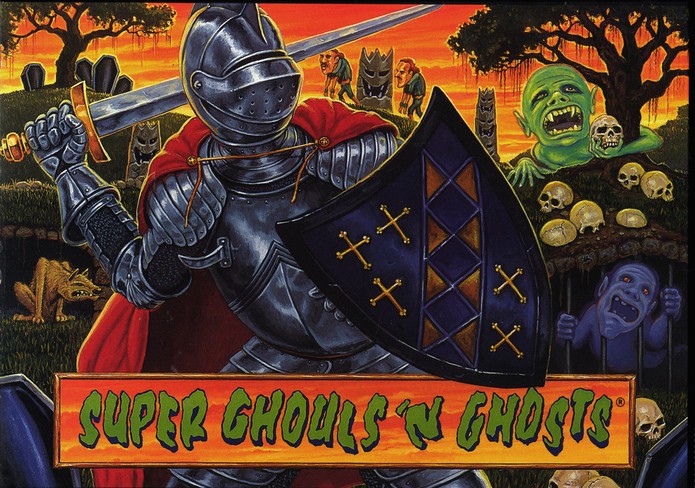 When it comes to my place among the many victims of Super Ghouls n’ Ghosts, I’m that person that always gets killed right away at the beginning of a slasher film. You know, before news that whatever twisted killer or grotesque monster is on the loose spreads and horny teens hole up and start making out, and hapless authorities start making bad decisions. Nope, I’m the unsuspecting guy in the first scene; the SNES still seems like a benign place, a magical Super Mario World where even a game setting with gorgeous 16-bit gnarly trees and bat-fanged monoliths and synthesizer organ music was nothing to be afraid of. Right? All dumb, I wander out into the graveyard at night, cocky and carefree, not prepared for the bloodbath that will soon follow. My own, that is.

I’ve never made it past the first stage of Super Ghouls n’ Ghosts alive. Not once, not ever. This isn’t necessarily because I suck at video games, though I certainly won’t claim to be The Wizard or anything (if you’re trying to gauge, I had little problem beating Donkey Kong Country: Tropical Freeze, but flipped the bird at the K levels). Anyway, I’m no red shirt. Besides, we’re talking about a 1-1 here; even for a notoriously brutal platformer in a notoriously brutal series this should be doable. No, in the end, it’s because f*** this game. Or to expound on that, within about five minutes of me booting this up once a year in the Virtual Console I immediately rage quit in a string of oaths and (admittedly idle) threats to smash the classic controller into a billion pieces. Because f*** this game. Ghouls just disarms me, goes against all my sensibilities, a serial killer whose motives are beyond my understanding. And yet I keep coming back, like dumb lake counselors in sequel after sequel, only to be subject to the same merciless terror and quick deaths over and over again.

Between a rock and a dead place.

It’s not my fault that I keep forgetting. When you look at screens or watch an entire playthrough of Super Ghouls n’ Ghosts, it just seems so comfortable and awesome for someone steeped in the Super Castlevanias and Actraisers of this world. For five seconds I really like it. Bright colors, large sprites, lively music, mode 7, jumping and throwing; these all say flavor country to a guy like me. They suggest a relaxing evening at home, maybe the kind where right before you settle in on the couch you throw some Jiffy Pop on the range. But there’s a difference between quiet and too quiet. And then the phone call comes, and your blood starts pumping; with almost no warning suddenly you’re running for your life. Not for long, though.

What separates Ghouls from most of its contemporaries is that it is utterly relentless. It can’t be bargained with, it won’t listen to reason. It just keeps coming for you, steady, methodical, without remorse. From the moment that hero Arthur first steps onto the scene, he is subject to a never-ending stream of regenerating zombies rising from the earth, flaming dragon skulls attached to dangling spines, speedy werewolves, pearl-spitting clams, and tidal waves (?!) sure to wash him away if he doesn’t stand on the right outcropping of rock. The odds are not in Arthur’s or my favor, and to emphasize our position even further, one hit strips him of his armor and his dignity, adding to the failure that is death by surely humiliating his family upon the discovery of the loin-clothed corpse by homicide detectives. The problem is that the first stage of Super Ghouls n’ Ghosts is, like the best horror movie beginnings, completely jarring. I’m just not ready, and so according to The Rules, I won’t make it.

As if this weren’t already embarrassing enough.

But maybe you’re destined for (or good enough to) to survive until the last act. You actually face Emperor Sardius in a final showdown to stop his deadly rampage once and for all, and return the land to a state where graveyards can be enjoyed by everyone. What happens? Naturally, just when you think you’ve beaten Super Ghouls n’ Ghosts, it pulls a Michael Myers. Nope! That wasn’t really the end, sucker! Time to do it all over again in Part II. Only this time we’ll make it harder, because, you know those producers love their body counts and all. Yeah, this time we promise you can finish this whole nightmare off once and for all…

It’s that kind of blind, stupid, stubborn optimism that has me once a year or so cheerfully pressing start at the title screen, again naïve, again unprepared. If Super Ghouls n’ Ghosts were a movie, someone would be yelling a warning at the screen as soon as I enter the scene, but as we all know, that never helps anything. Just like always, I hear an intriguing noise in the shadows and go to investigate; but the pretty pictures and good controls are only a mask. A vicious murderer lies in wait, one that kills me every time.