Spyro: The Reignited Trilogy was one of the more surprising releases of 2018, recklessly tip-toeing the line between being a blatant nostalgia trip and a contemporary 3D platformer, maintaining its balance in some aspects, while wobbling considerably in others. For some, it was a highly anticipated release, promising the return to a world that had made an indelible impression upon them as burgeoning video game players. For others and I, it was a chance to play a 3D platformer from a console we didn’t have the pleasure to play in our youth, and to further understand its eternal praise among our social circles. It’s also what could be considered a perfect late year title in its vibrant, lighthearted, and ‘easy to pick up’ nature – and this showed in its stellar sales.

Yet, as I have been playing through Spyro – gliding, roasting, ramming – a certain feeling was spurred within me, one that I certainly shouldn’t be having for a game that I’ve never previously played. That feeling is nostalgia: that sweet, gooey, intrinsically warm feeling that usually accompanies one when re-visiting a period long gone. Now, this isn’t to say that nostalgia is simplistic in nature, or that we can only feel nostalgia for media we’ve consumed previously. Viewing texts and images such as posters, articles, advertising – hell, even the title, of a novel, TV show, you name it, from the past can easily lull one into pining for another time. Spyro has been quite a different experience because the truth is while I haven’t played this game or its remake before, I feel like I have played this game and its remake before.

The Spyro series remains a worthwhile purchase in its original form.

While some of their design elements differentiate, there are certainly more similarities than differences between the Spyro series and its competitors, namely the 3D platformers known as ’collect-a-thons’ of the late-nineties and early-noughties. This works both to its favour, and to its detriment. In being closely remade, Spyro successfully generates nostalgia with its intriguing environments, well-thought-out level design, fluid controls, satisfying item searching/collecting, competitive mini-games, and loveable protagonists. Essentially, Spyro stirs a familiar mixture in adding in all the elements that it had been critically praised for previously. As a result, it’s difficult not to feel nostalgic for the era where collect-a-thons were core AAA darlings, with some titles certainly deserving of the critical acclaim they accrued on release. However, it is important to remember that titles such as Donkey Kong 64 memorably took item collecting to exhaustive degrees. The Reignited Trilogy also encapsulates this feeling of regression, albeit in a different way. Like returning to a place that one has well and truly moved on from, purchasing such a game, technically ‘new’ in 2018, only highlights the leaps and bounds that the industry has achieved since the late nineties.

Spyro hasn’t changed enough, and in that a certain dimension of mundanity arises, indicating that while nostalgia may be desirable or present, it doesn’t ensure a positive gaming experience. If anything, it just feels tired. 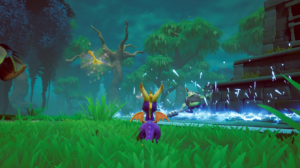 I want to make it clear that this isn’t necessarily a critique unique to The Reignited Trilogy, but rather a criticism of remasters and remakes overall. It also brings to the fore a popular observation (or in some cases, complaint) surrounding the video game industry – that it has an economic and cultural reliance on nostalgia. This isn’t a new observation and has found itself long discussed among fans, journalists, and academics alike. The term ‘nostalgia industry’ has also recently been thrown around by critics and writers to explain the sudden presence of remakes in industries such as film and fashion and is arguably applicable to video games also.

For me, the presence of the nostalgia industry stirs a few key questions about older games and our opportunity and desire to play them. For example: to what extent is the presence of the nostalgia industry surrounding games related to the lack of accessibility to, and preserving of, older titles? In what ways can we motivate the industry (and ourselves) to encourage a healthy sense of historical relativism when it comes to previous generation/s games?

The phrase ‘if it ain’t broke, don’t fix it’ comes to mind.

The Spyro series remains a worthwhile purchase in its original form. Even if the remake is glitzier, it seems to only be so on a surface level, a blatant re-skin that doesn’t conceal Spyro’s aged gameplay style. To put it bluntly, it acutely presents like an antique next to titles such as Red Dead Redemption II or Spider-Man. Yet, there’s nothing inherently negative about the platforming mechanics, collection objectives, and youth-friendly narratives of the late nineties – they’re a lot of fun when re-visited, and their classic status is indisputable. The Nintendo Wii U and 3DS’ (and some of the Switch’s) current catalogues are also a testament to this, with Nintendo’s vast, ‘seal of quality’ stamped backlog still promising a good time, even if the latest Mario -Party, -Kart, -Tennis sits neatly on retail shelves.

The phrase ‘if it ain’t broke, don’t fix it’ comes to mind, and yet there is something glaring at hand that can be fixed, and that is industry attitudes towards the preservation of, and accessibility to older titles. Why do we jump for joy when the latest nostalgic title is announced? Are our attitudes toward anything ‘archaic’ so underdeveloped, and so rabidly overshadowed by the capitalistic desire to consume the ‘old, but not really’ piece? Or is it simply because older titles are more difficult to obtain and play? Debates on issues such as backwards compatibility, the value of library and streaming services such as the Xbox Game Pass and PlayStation Now, and the presence of older console titles in digital stores become increasingly important as the new generation encroaches ever closer, and those titles, popular – but not popular enough – become exclusive to a time well passed. The common exchange of the new and the different, for the economic comfort of the tried and done, doesn’t complement video games – it’s to the detriment of their incredible creativity and burgeoning status as an art form.