The real-time tactics genre has long been overlooked as faster, more aggressive action and real time strategy games have oversaturated the market. Gamers have forgotten the fun of a more strategic, meticulous gameplay experience, and the joy of watching a well executed plan succeed. Shadow Tactics: Blades of the Shogun aims to revive real-time tactics games, but can it infuse new life into the genre?

Taking a page straight from previous landmark tactics games such as Desperados, Shadow Tactics is primarily focused on stealth.  The player is tasked with leading a motley crew of samurai, ninjas, marksmen, and courtesans as they carry out the shogun’s dirty work, all in the name of peace.  Missions vary from assassinations to rescues and theft, with each character having their own set of highly effective abilities.  The samurai is slow, but his attacks are powerful, while the ninja is agile but must act with precision lest he be caught and easily killed.  The amount of diversity in all five playable characters is one of the most memorable aspects of Shadow Tactics.  The ninja Hayato is cool and collected, which juxtaposes well with the samurai Mugen’s brash yet thoughtful personality.  Each character is fleshed out during the story, giving them a strong sense of humanity and personality.  Banter between characters while they’re on missions is genuinely entertaining and doesn’t feel forced.

The most appealing aspect of Shadow Tactics, especially for hardcore fans of the genre, is how god-forsakenly difficult it is.  Now, I’m no expert on tactical games, and devote most of my time to RPGs and RTSs, so to say that Shadow Tactics was tough for me is an understatement. Right from the beginning the game pits the player against highly perceptive and ruthless enemies. Couple this with a limited supply of health, and cover that can be easily circumvented, and Shadow Tactics offers up a challenging experience with the perfect balance of risk and reward.

Every character has the ability to lure or distract the enemy AI in some way, which leads to interesting combinations for the player to fool around with.  For instance, Hayato’s pupil Yuki has the ability to lay a deadly trap, and call over enemies with a flute. If timed correctly, she can kill two birds with one stone, and hide the bodies in an efficient manner. In fact, disposing of enemy corpses is a key gameplay element throughout Shadow Tactics. While enemy guards can spot the player easily enough, they’ll also search for friendly corpses lying in the open, and go into an alerted state if they find them. When a guard goes on alert, he’ll call other guards to his position and have them patrol new areas. To keep things a little less stressful, one can dispose of the bodies in a number of ways, such as hiding them in a well or inside an empty shack.

Another memorable element of gameplay is how the enemies track the player characters. During one instance, when players are tasked with sneaking through a snowed-in country town, guards will notice footprints left in the snow. They will then begin a thorough investigation of the surrounding area that involves rifling through bushes and checking shacks for the culprit. This simple detail adds an extra layer of depth and difficulty to the game that makes it all the more enjoyable.

Coupled with Shadow Tactics’s intriguing story and fantastic gameplay is a detailed and addictive scoring system.  The game offers three different difficulty levels, with the latter two awarding medals for completing specific tasks. These achievements vary from not killing anyone through the mission, to completing mission objectives in unorthodox ways. Furthermore, each level offers a speedrun time for the more experienced players to try and overcome. 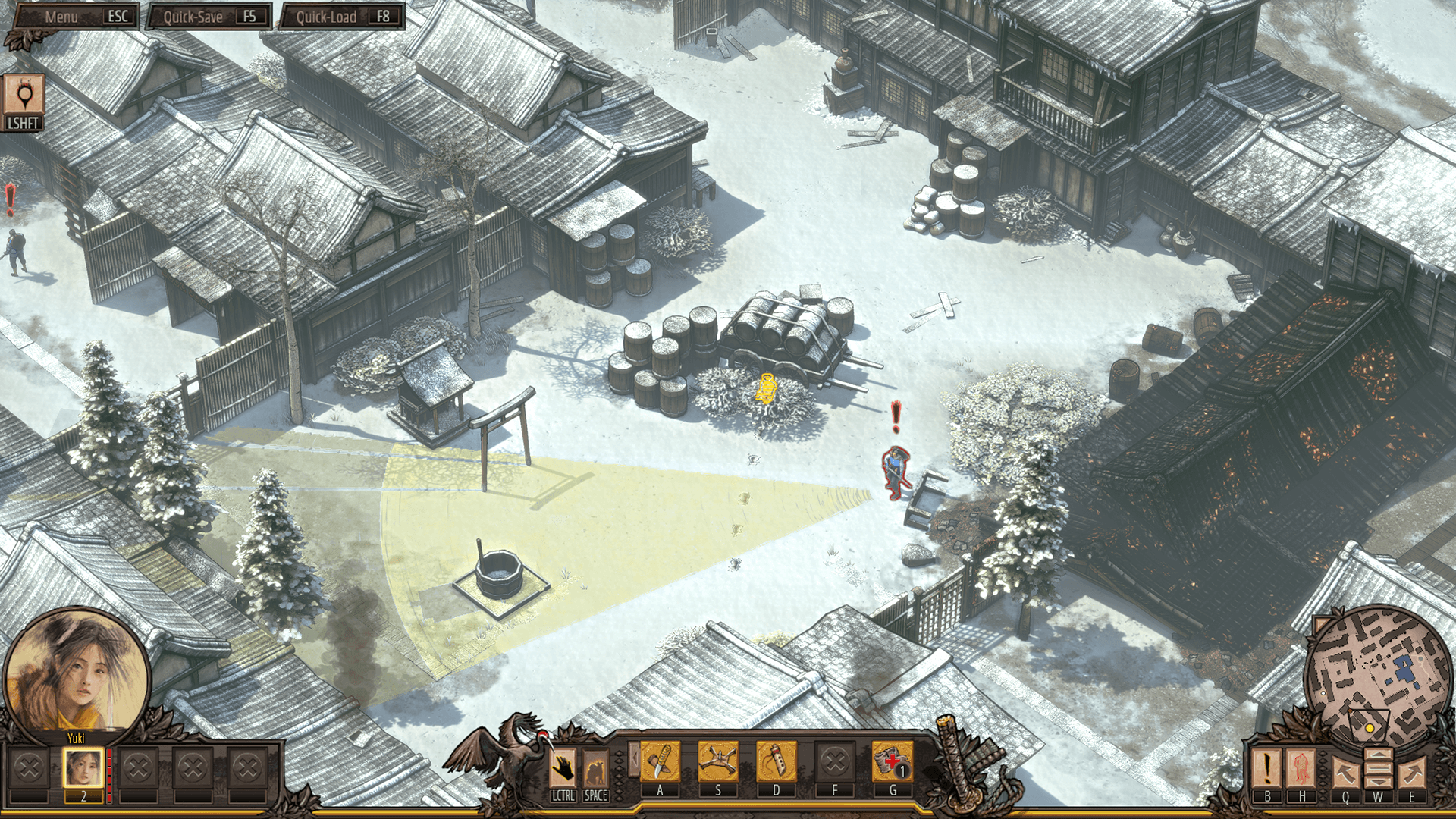 Along with superb gameplay, Shadow Tactics also boasts a stunning art style. Relying on a mixture of light cell shading and hand painted backdrops, every level shines with radiant beauty. Even in duller, more muted areas, such as those set in snow, the beauty of the environment is not lost. Character movements are also fluid and graceful, adding to the natural flow of the gameplay and scenery.

If any fault is to be found in Shadow Tactics, it comes from the game’s abysmal load times. Any time the player has to load into a new mission, the game enters a freeze-like state, and stays that way for a solid five minutes. While the game gives the player a warning that the loading process takes some time, anything over two minutes is simply unacceptable, especially by today’s standards. However, this is a small hiccup in the overall experience.

Shadow Tactics: Blades of the Shogun is a breath of fresh air for the real-time tactics genre, and a wickedly difficult, satisfying gameplay experience. Combining the tense excitement of a stealth action game with the backdrop of Edo-period Japan, and a cast of unique and complex characters, developer Mimimi Productions has created something truly unique and memorable.  Shadow Tactics exceeds expectations, and also redefines its genre for a modern audience.