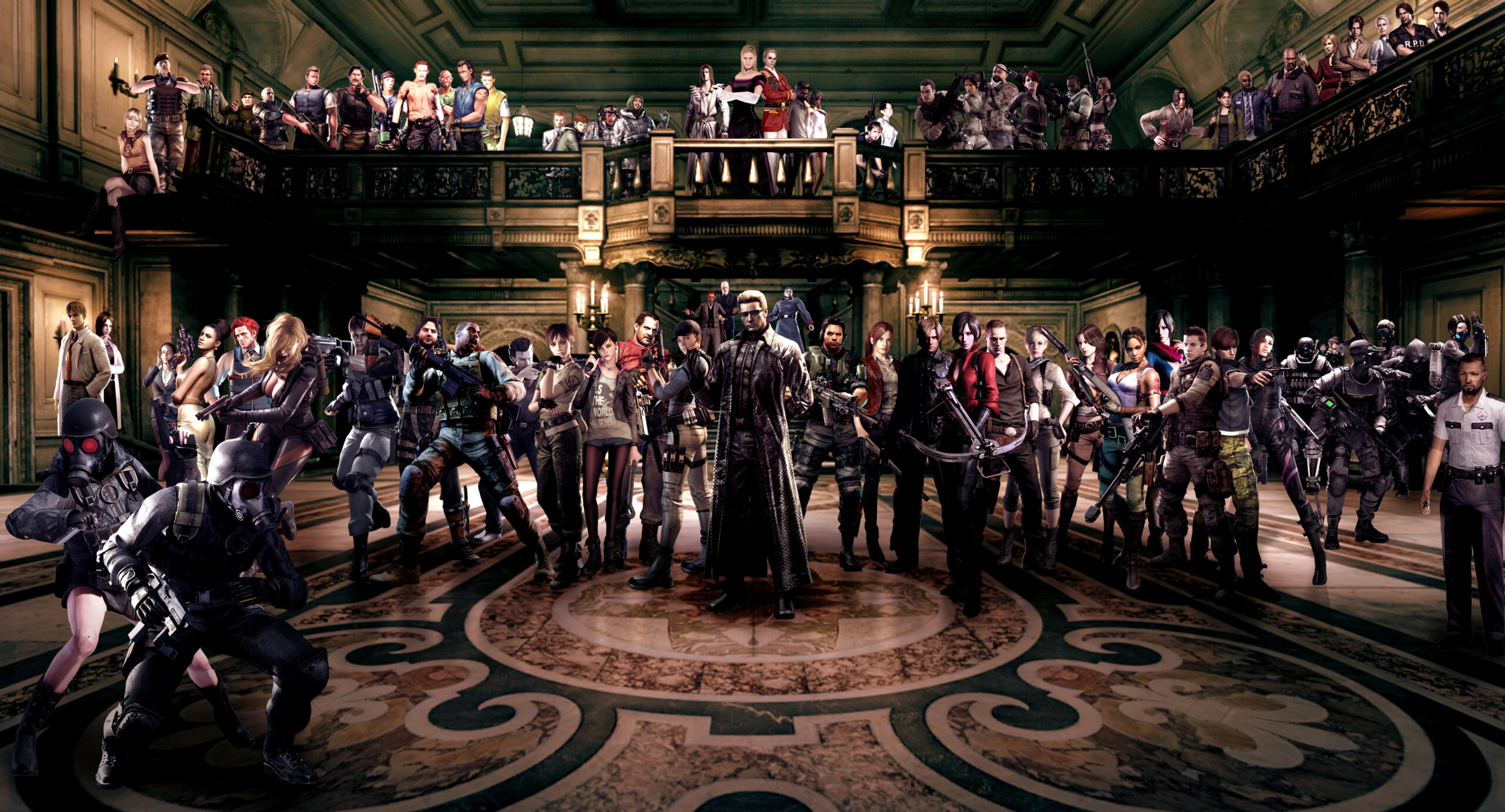 Since its release in 1996, Resident Evil (known as Biohazard in Japan) remains one of the most popular and influential series in the genre of survival horror. In fact, Capcom first coined the term “survival horror” when marketing the original Resident Evil. The original Resident Evil was such a huge commercial success it started a golden age for survival horror games and helped put PlayStation on the map as a dominant console. For twenty-five years, the Resident Evil brand has become a household name in gaming. It has spawned many sequels and spinoffs, six live-action films, several animated films, comics, novelizations, and a variety of other merchandise. As of its 20th year anniversary, Resident Evil became Capcom’s biggest franchise in terms of sales.

Back in the 1990s, developers relied on pre-rendered 3D backgrounds to bypass the limitations of the time. The 3D engines of the 1990s just couldn’t get the job done. When these pre-rendered backgrounds were done right they looked great. Games like Blade Runner, Final Fantasy VII, Grim Fandango, Legend of Dragoon, and of course the original Resident Evil games on the PlayStation all used pre-rendered backgrounds to create very memorable and well-made atmospheres that made these games timeless. Many people still play these games today whether through ports, remasters, or on their original platforms.

If there is any perfect representation of this era, it’s definitely the original Resident Evil that debuted on the original PlayStation in 1996. It has it all. The cheesy dialogue, the use of live actors, pre-rendered backgrounds, cheap jump scares, horror cliches, and even a big spooky mansion. But it still remains one of the greatest horror games of all time and a pioneer of the genre of survival horror in gaming.

The original Resident Evil came out at the dawn of the PlayStation era where 3D gaming was relatively new. Shinji Mikami (the creator of Resident Evil) was originally appointed by his mentor, Tokuro Fujiwara, to create a 3D remake of Fujiwara’s earlier survival horror game, Sweet Home (1989). The game Sweet Home was based on the film of the same name. With Fujiwara serving as the producer of this game, Resident Evil borrowed heavily from Sweet Home. Resident Evil adopted its mansion setting, its limited inventory management, its use of many puzzles, its use of door animations, its use of notes and diary entries scattered around the mansion, its use of healing items scattered around, its use of lighters and lock picks, its use of backtracking, and its use character death animations. All of which have become hallmark characteristics of the franchise now.

The original Resident Evil was originally supposed to be a supernatural and psychological horror game much like the movie Sweet Home and the game it’s based on. But Mikami eventually based the game on George Romero’s classic zombie films. Resident Evil was also originally going to be a first-person horror game until Mikami discovered the classic horror game, Alone in the Dark (1992), which inspired him to adopt the fixed camera system and tank controls. According to Shinji Mikami in an interview with Gamestop, the first-person perspective just “didn’t get along so well with the original PlayStation’s specs.”

The Resident Evil franchise has never been known for its great dialogue and voice acting. In fact, it’s been downright awful at times. Especially in the original Resident Evil. But it has given people memorable lines that are still repeated to this day. Lines such as Barry calling Jill “the master of unlocking” and telling her she was “almost a Jill sandwich!” after he rescues her from a trap. Or when Wesker yells at Jill, “No, don’t open that door!” There are just too many memorable, cheesy lines to list here.

In a way it’s charming. It adds a B-horror movie vibe to the game, which makes it a campy classic and fits perfectly with the time period. But the bad voice acting is also understandable because the voice acting was relatively new in video games at this time. Most games just used text to convey dialogue. A Japanese developer simply didn’t know what natural English dialogue in video games sounded like back then. It’s also possible they were getting their influences from B-horror American movies so campy dialogue may have sounded alright to them. At least voice acting in video games has gotten substantially better since the first Resident Evil, well for the most part.

Despite its campiness, Resident Evil remains a great survival horror game. The idea of venturing through a 3D mansion, looking for items, solving puzzles, and fighting enemies were unheard of for the time. Players had to make decisions on how to handle the situation as one wrong move could lead to an instant death or it could leave them completely stuck at a part with little to no items. Sometimes players cannot fight every enemy they encounter. A better strategy could be to dodge the enemies.

Players faced a unique amount of different enemies. Besides the typical zombie, players encountered zombie dogs, zombie crows, a giant snake, zombie sharks (including a huge one), a giant plant monster, hunters (reptilian monsters with claws), and the big bad Tyrant at the end of the game. So players need to plan their inventory accordingly to handle these threats.

Item management is the core part of Resident Evil’s gameplay. Players are only given a limited amount of spaces so they must decide what items to carry, whether it be weapons, ammo, keys, or healing items (herbs and first aid sprays). Items can be stored in universal chests that players find in save rooms. Every Resident Evil has an area with soothing music that contrasts with the rest of the gloomy and sinister soundtrack. It gives players a sense of relief before they venture back into the horrors of their environment. The original Resident Evil also introduced a save system using a typewriter and ink ribbons that are always found in safe rooms. Back then there were no checkpoints or autosaves. If players died at a part they would be sent back to the last time they saved, so if they forgot to save they could have wasted a substantial amount of time. All of these gameplay mechanics really add to the challenge of the game.

A terrifying part about Resident Evil is the unknown. Players don’t know what’s on the other side of the door. That is why the door animations in the Resident Evil series are brilliant. It adds a lot of tension and suspense, especially if players are running low on ammunition and health. Even when players think they are safe, monsters could burst through the windows at any time, such as the infamous hallway scene with the Cerberus (zombie dogs). This jump scare has scared essentially everyone who has ever played the original Resident Evil.

Perhaps the most appealing part of the game is the mystery behind the mansion. As players venture through the mansion and read many notes and diary entries, they will begin to piece together what happened to everyone. Eventually, players discover who is truly behind all the monstrosities in one of the most subtle, yet amazing reveals in all of video games. It’s probably not a mystery today as the antagonist of the first game has been a major antagonist for years. Plus even people who have never played Resident Evil know all about the Umbrella Corporation. But for the time, this game had an excellent mystery.

All of these elements are missed by people who have played the original games. After several sequels and spinoff titles, the series was starting to get stale so Capcom decided to make a major change to the franchise by making it more focused on action than survival horror. It worked out great at first as Resident Evil 4 was critically acclaimed and a huge seller, and is now widely considered one of the best and most influential third-person shooters of all time. Buts its sequels Resident Evil 5 and Resident Evil 6 are not as highly regarded, especially Resident Evil 6. It went too far in the direction of action that it felt like a sequel to Call of Duty rather than a Resident Evil title. Resident Evil 6 essentially forced Capcom to return to the drawing board.

In Resident Evil 7: Biohazard, Capcom finally listened to the fans by returning the series to its horror roots. With so many companies and global conflicts in previous games, Capcom returned the series to a more subtle setting, another creepy mysterious mansion as fans of the series were introduced to the new cannibalistic Baker family,. Hopefully, Capcom will continue to capture the same horror players felt the first time they stepped into the Spencer Mansion all those terrifying years ago.

Editor’s Note: This article as originally published on October 1st, 2017.