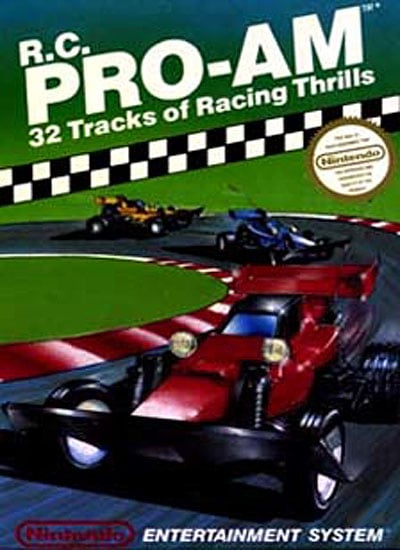 In 1987, Rare developed what is considered one of the best games released for the Nintendo Entertainment System, and a game often cited as one of the best racing games of the 8-bit generation. RC Pro-Am took the idea of vehicular combat (something already seen in such games as Death Race, MUDs, Rouges, and Super Sprint) and found interesting ways to popularize it way back 1988. The subset of the racing genre would take off from there and never be the same. And in many ways, RC Pro-Am paved the way for future games such as Super Off Road, Rock n’ Roll Racing, and yes, the Mario Kart series. Without RC Pro-Am, Nintendo’s best selling franchise may have never been created.

Truth be told, RC Pro-Am is extremely dated and I doubt most modern gamers would spend too much time (if any) revisiting this game, but dated or not, the game deserves credit for being so good for its time. Released in 1988, it pioneered something crucial to the racing genre: R.C. Pro-Am was one of the first racing games to allow your car the ability to attack and damage your opponents. And back in the late 80’s, this was the coolest thing as far as my adolescent brain was concerned. And they weren’t just cars — they were radio-controlled cars that can use bombs, rockets and oil slicks to ensure that the competition wasn’t going to make it to the finish line first. Think of this game as a pre-cursor to Micro Machines, only with weapons and released on one of the greatest consoles ever made!

What set R.C. Pro-Am apart from other racers at the time was the overhead, isometric perspective, rather 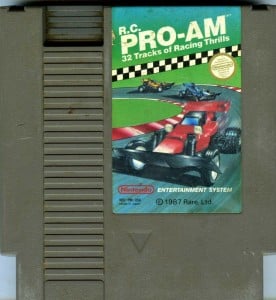 than the over-the-shoulder third person point of view used by other NES racers such as Rad Racer and Mach Rider. Coupled with track based upgrades to help boost acceleration, top speed, and grip — as well as the added bonus to have your vehicle upgrade if you collect the letters NINTENDO off of the tracks — RC Pro-Am offered plenty of reasons for gamers to keep on playing. Speed boosting strips laid out over the track also made their first appearance here, and along with the various hazards on the road, RC Pro-Am became so well received that it went on to inspire several sequels, including the even better RC Pro-Am 2 which was one of the few 4 player games on the NES.

Consisting of 24 tracks total (or 32 depending on who you talk to and which version they play), the goal for each competitor is to qualify for the next race by finishing in first, second or third place. It doesn’t seem too hard considering there are only four cars in each race but things start to get difficult very quickly, and by the fifth or sixth race, players will find themselves struggling to stay on track. Don’t let looks fool you and don’t think this is an easy game just because it was released decades ago — RC Pro-Am is deceptively challenging and requires track memorization in order to succeed. Even with the smallest mistake, you’ll find yourself lagging behind in the last place.

RC Pro-Am is honestly one of the best games released on the NES and perhaps, the ultimate proof that a ridiculous game and a good game aren’t mutually exclusive. Put your brain in neutral and enjoy the ride. R.C. Pro-Am succeeds as a quality racer despite the inherent limitations of the time.

And it also has a catchy theme song!