Very few developers have managed to take an established character and completely flip the script the way Rare has with Conker. What was once a loveable cute red squirrel with humble beginnings on the Gameboy Color eventually changed into the foul-mouthed, gun-toting, alcohol-swilling Rare icon that we all love to this very day. An adventure-platformer first released on the N64 in 2001, Conker’s Bad Fur Day broke new grounds in gameplay and design, and certainly broke the ESRB rating as well. It does not shy away from its M-rating, and at times it does certainly test the boundaries of what’s acceptable to near-controversial.

The plot of Conker’s Bad Fur Day is as simple as they come. Conker is out at a bar and goes on a complete bender. As he leaves inebriated and ready to go home, he passes out in the fields somewhere and wakes up lost and hungover; that is basically where the game begins. As simple as the plot-line is, CBFD becomes wildly eclectic and over-the-top as your quest to go home continues. The narrative and dialog are STILL some of the funniest lines I have heard in video gaming. The delivery and timing of jokes and punchlines are at times well-crafted, but more often than not, Conker comes off lewd and crass.

Conker’s Bad Fur Day received critical acclaim not just with its storyline, but also with its innovative gameplay. CBFD comes off as an adventure-platformer, but pioneered the category by adding multiple mechanics from a diverse amount of genres not typically associated with this style. You have your third-person shooter elements, you have puzzle elements, and even a karting element, all in one game. Every bit of the gameplay is as wild and wacky as the world and denizens that encompass the title. Conker provides great bits of pop-culture into the game, especially changing the theme of some worlds into complete movie spoofs. You will see nods to Saving Private Ryan, Alien, The Matrix and hell, even The Exorcist. 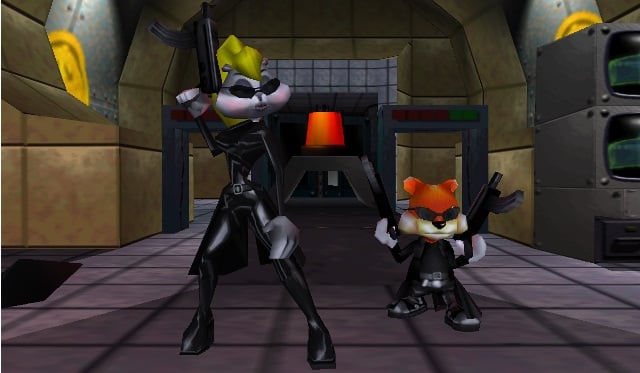 One of the more memorable aspects of the game is the boss encounters. Just as how I described Conker’s messed-up setting, the bosses are equally so. Each boss battle always presents itself with new mechanics not yet seen in the video game, and it’s both wildly entertaining and at times crazy as…fudge. Though without hesitation, if you ask anybody who’s played Conker’s Bad Fur Day which boss stands out the most, The Great Mighty Poo would likely be the answer. Yes, you read it correctly- The Great Mighty Poo. Not only do you travel to a level where you’re surrounded by fecal matter, but you are to eventually face-off with one big pile of it as well. But that’s not the best part- his way of conversing with you is literally him singing what seems to be a twisted Disney theme song.

Conker’s Bad Fur Day is among Rare‘s finest titles in its illustrious catalog and history. It took many fans by surprise, and many critics as well, but is still well-revered in this generation of gaming. With its simple yet over-the-top storyline, and a gameplay as eclectic as it is innovative, Conker will forever be king in the world of Rare.