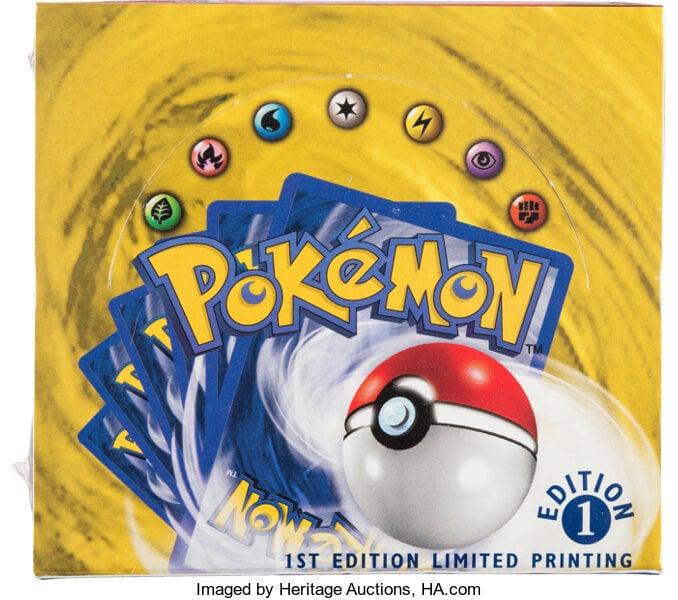 Well, it would seem that the need to “catch ’em all” resonates more so with some people than it does others as recently; a fan of the series spent a whopping $408,000 on a box of Pokémon cards. Now that’s dedication.

The box was sold via an auction on the Heritage Auctions website and is a First Edition Base Set Sealed Booster Box, manufactured by Wizards of the Coasts back in 1999. It’s pretty impressive that the cards have been able to be kept in such pristine condition for over twenty years and this was probably one of the biggest selling points for potential buyers and collectors. There are also a fair amount of cards within the box, with 36 booster packs including 11 cards within each pack.

Take a read of the description below:

A Pokémon First Edition Base Set Booster Box that’s sealed in its original shrinkwrap is the pinnacle of Pokémon box collecting. Created in 1999 by Wizards of the Coast, the set featured 102 cards, and most notably the Charizard. This box contains 36 booster packs, each with 11 cards for a total of 396 cards! These box sets have become very scarce, due to their low print run, and very few still remain in the sealed state. Since the cards haven’t been handled, they are likely all in GEM MINT condition. In September 2020 we sold a similar box for $198,000! A PSA 10 1st edition Base Set Charizard alone recently sold for over $220,000 so there’s no telling where this box will end up this time. If you “gotta catch ’em all” then this is the lot for you! From the Pokémon Central Collection.

If you would be interested in obtaining a box for yourself, the seller is currently accepting offers of $468,000 or more over on Heritage Auctions. On a completely different note is anyone willing to loan out around $468,000? Asking for a friend.