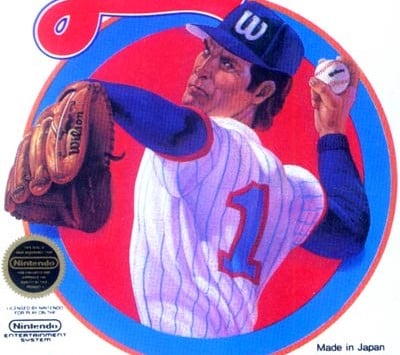 There were a ton of baseball games released for the NES, making the choice difficult for wide-eyed naive kids who just wanted a way to recreate the crack of the bat and the flashing of leather; do they go with the one that provided names and stats of actual MLB players, the one with robots, or the one that is no doubt the best baseball game released for the console and maybe ever? Like with other aspects of life, so often the another alternative blinds us to the truth and walks off with our hard-earned cash, and that, of course, is the coolest option. Maybe looks aren’t everything, but c’mon; you know they are. For those in the late 80s who wanted to take the digital field to bask in the TV glow of their favorite pastime and look awesome doing it, their choice was Jaleco’s Bases Loaded. Right off the bat the box art told fans Bases Loaded was no joke, no kiddie game; the lack of caricatures or cyborgs let people know this one was for purists. A scowling pitcher poised to hurl a strike (or possibly send a message) fit in so much more during the era of headhunters like Nolan Ryan and Roger Clemens than cartoonish sluggers, portraying for a scrappier version of the sport that appealed to little leaguers everywhere. Baseball isn’t some sort of mythic metaphor for life when you’re enjoying a wad of Big League Chew; it’s a game about discovering where one stands among one’s fellow playground denizens. Facing down a nasty fastball and driving home the winning run nets social status points, as does sliding hard into second (spikes up), making a diving catch to rob a buddy of a hit, and of course, charging the mound at some jerk who plunks batters for standing their ground.

Doing that last one meant probable ejection and possible expulsion, so it very rarely happened, but every kid still dreamt of one day taking out that baseball bully with George Brett-like burst out of the batter’s box (as long as they didn’t end up like Robin Ventura). Bases Loaded allowed players to fulfill this revenge fantasy, and even if it looks awkward and goofy now, at the time it was certainly part of the fun. Bells and whistles like this meant nothing to the actual gameplay; after all shiny objects simply meant to attract, not necessarily denote value. Shaming is an important part of sports and life.

And so Bases Loaded continued that philosophy with player sprites that were as close as 8-bits could get to replicating the look of the guys on our baseball cards, a snazzy and intelligible digitized voice calling strikes, decreeing “play ball!” and “you’re out!” (so formal), and sweet scoreboard shots of the pitcher on the Jumbotron shamefully burying his face in his glove after serving up a tater to the guy behind him rounding the bags and pumping his fist. This all adds up to a great-looking uniform to prance around in, but jerseys don’t win games. That job belongs to the players who wear them, and unfortunately Bases Loaded probably was a .500 team at best.

While certainly playable and even enjoyable at moments, Bases Loaded lacks some basics and features that could have made it a real contender when it came to fan’s hearts as well as their wallets. While its focus on the legendary duel between pitcher and batter uses a unique perspective that mimics the camera positioning of an actual broadcast (very cool), the result is an angle that makes timing a fastball extremely awkward (less cool). Though the view point does make one feel like they’re watching a live game, having to track the shadow of the ball instead of the ball itself is a constant reminder of its digital nature, and the sheer number of embarrassing swings taken by players’ athletic avatars is enough to mitigate any sense of awesomeness created by the ambiance.

This was particularly frustrating when an opponent happened to be sitting on the couch next to you, chuckling as they planned their next sequence unhittable sliders, but these head-to-head games carried little other weight. The only way to play a season in Bases Loaded (which was shortened to 80 games) is in single-player mode against fictional teams, and so great rivalries can never truly be developed. There are also only twelve of these squads, so if you aren’t lucky enough to be living in one of the represented cities or states (like Hawaii, Jersey, Omaha, and Utah, inexplicably), then the bonding process can take a little longer. This sense of detachment is ultimately what has benched Bases Loaded late in its career. As the saying goes, keep your eye on the…shadow.

Baseball is a sport of reflex, but here the controls can be cumbersome and unintuitive. Raising and lowering the bat to meet the pitch adds a complexity that doesn’t mesh with the instinctual real-life act, and the scrolling camera that tracks fly balls to unseen outfielders makes even a simple can of corn nerve-wracking. Having extra options and dimensions is a wonderful thing for any team, but fundamentals are what get them to the playoffs. Though sparse in its approach, Bases Loaded doesn’t portray the flow or poetry of the game, and as such feels disjointed and out of sync, which hurts fans ability to self-identify. After all, though in reality we may swing outside the zone or boot grounders on the physical field, most visualizations end in heroics, and isn’t that what video games are supposed to let us live out? If they can’t, then I might as well go outside and work on my curveball.

It may sound like a line from Field of Dreams, but a big part of the appeal of baseball is its ability to capture the imagination like so few sports can. Baseball has heart; that’s what ultimately has kept it alive for well over one hundred years. Gutsy performances, walk-off victories, instinct for strategy, the drama of humanity wrapped up in a game.  Bases Loaded tries hard to capitalize on this, but by invoking mostly (admittedly cool) superficialities instead of concentrating on playmaking, it ultimately feels more like a trendy product than a love letter to America’s pastime.

Yet I still want it…