Of the roughly fifteen games Nintendo developed for the Wii U, perhaps none are as mistakenly overlooked as Pikmin 3. Of course, it’s not surprising that an underperforming entry of a niche franchise on a flailing console failed to set the world on fire. Yet while other AA Wii U games such as Captain Toad: Treasure Tracker and Donkey Kong: Tropical Freeze have been given a second life on the Switch, it remains unclear if Pikmin 3 will ever see the light of day again. Meanwhile, the fate of the franchise is equally unknown, despite series creator Shigeru Miyamoto famously stating development was near completion years ago. In honor of this underappreciated gem and the series devotees who were strung high and dry at yet another E3, I will be harnessing 100/100 of my analytical prowess to burrow into Pikmin 3’s design level-by-level. In this entry, I will take a look at the game’s third course, the Tropical Wilds. 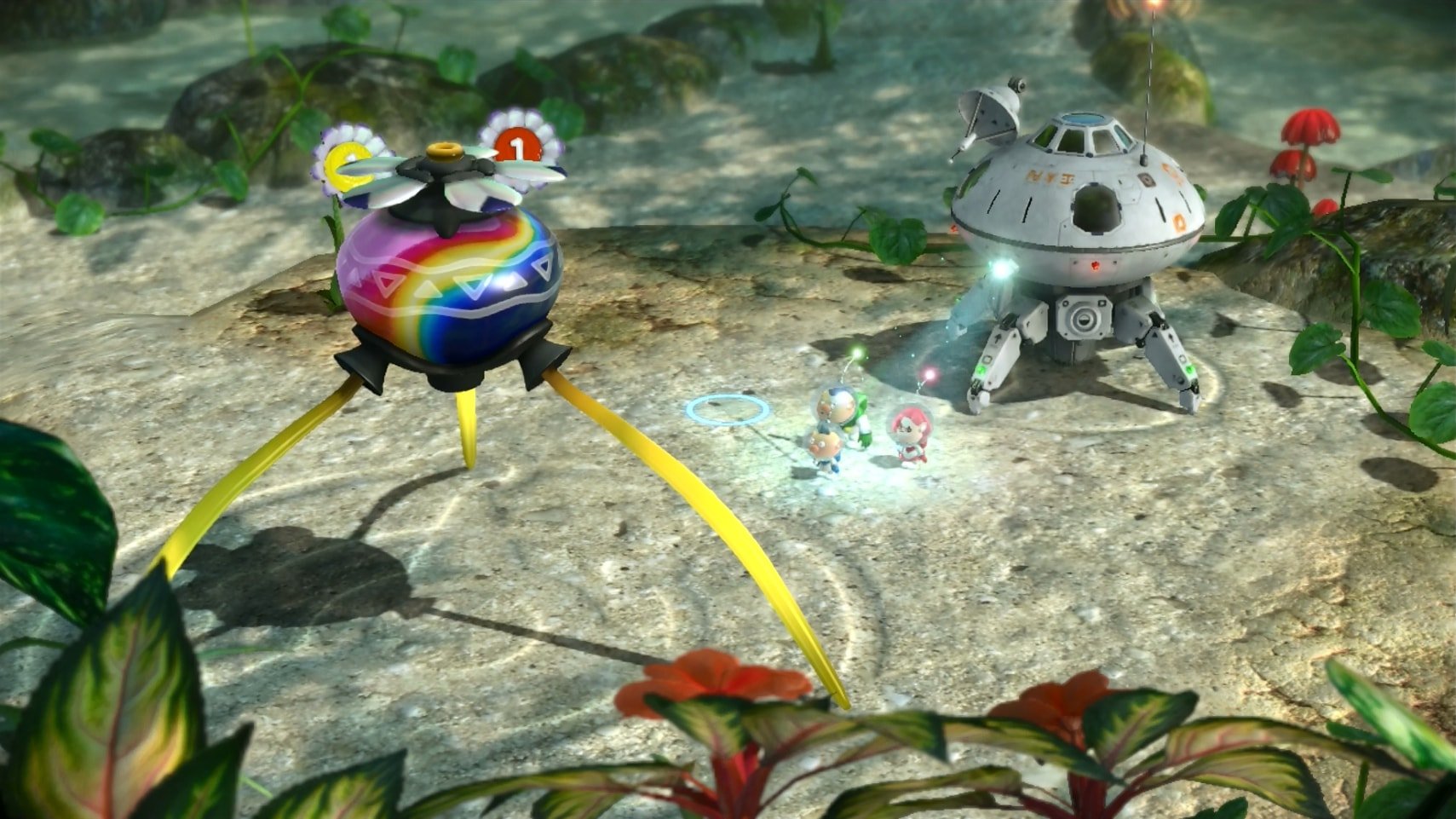 Alph crash lands here at the start of the game, promptly discovers Red Pikmin, and wields them to reach the S.S. Drake. After rescuing Charlie in the Distant Tundra, the three crew members return in search of Olimar, but the signal they were chasing turns out to be another cell phone. In short, the Tropical Wilds is the least narratively consequential level of the game, featuring only a short tutorial and a red herring. From a storyline standpoint, it could be removed from the game entirely and almost nothing would be lost. 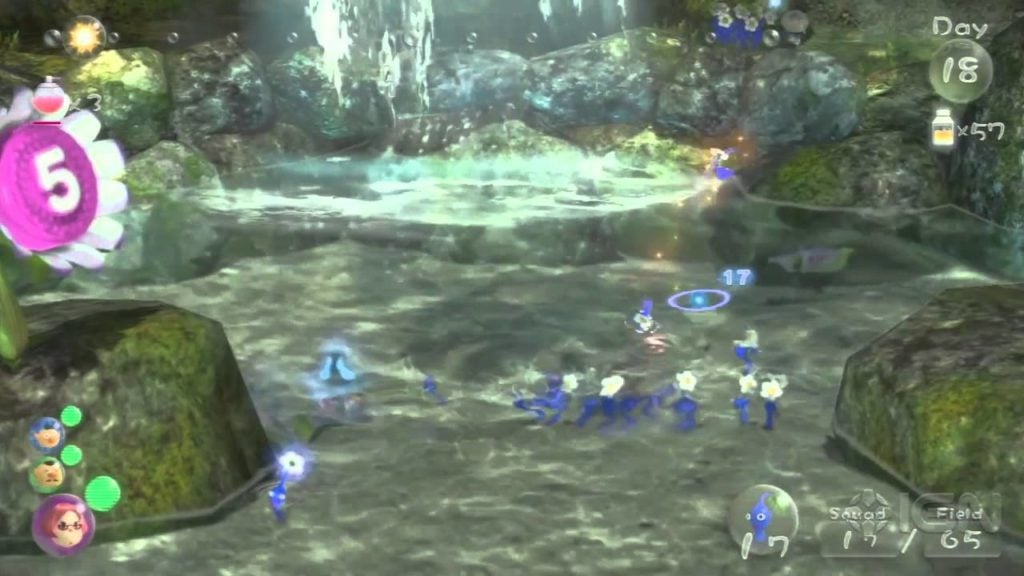 Aesthetically, the Tropical Wilds feels like a dimmer Garden of Hope than the tropical location it purports to be. Its abundant reuse of assets combined with an indistinct setting make for a scattershot and inconsistent level that never commits to being a beach, a jungle, or even vaguely tropical. As a Garden of Hope redux, however, it does succeed in some regards. Its openness, verticality, and consistent demand to throw other crew members underscores how far the player has come in just a few hours of play. However, mixing this openness with the level’s winding paths can make the level needlessly tough to fully grasp. And since the level is comprised of one large central area with five outshoots that are all one room except for the outshoot where Alph crash lands, it feels less cohesive and free-flowing than most levels. The northern part of the map is particularly unenjoyable, from its repetitive mini-boss to its remarkably unclear, sloppy, camera-spazzing puzzle. And once again a glut of content is artificially gated behind water, which makes the return to collect everything later in the game another Blue/Winged Pikmin heavy run.

The Tropical Wilds’ main theme is its tropical setting, though it hardly recognizes this itself. In my last article, I was critical of the Distant Tundra for not investing much in its theme beyond its art, but the Tropical Wilds takes this willful ignorance to a new level. Indeed, almost nothing about the Tropical Wilds seems “tropical” at all, except possibly its soundtrack and some (though not most) of its fruit. Part of this might be due to how multifaceted it claims to be. It is, after all, in a jungle near a beach, which implies three settings have to be depicted in a relatively small space. Unfortunately, the stage mostly feels like a mishmash of these settings and never clearly one or the other. Furthermore, nothing is accomplished procedurally in any of these settings to make them stand out from the rest of the pack. Playing on the beach feels the same as playing in the jungle, which ultimately feels the same as playing in the Garden of Hope. And since asset reuse is so rampant in this particular map, it looks more like a part of the Garden of Hope with slightly different lighting than an entirely different environment. 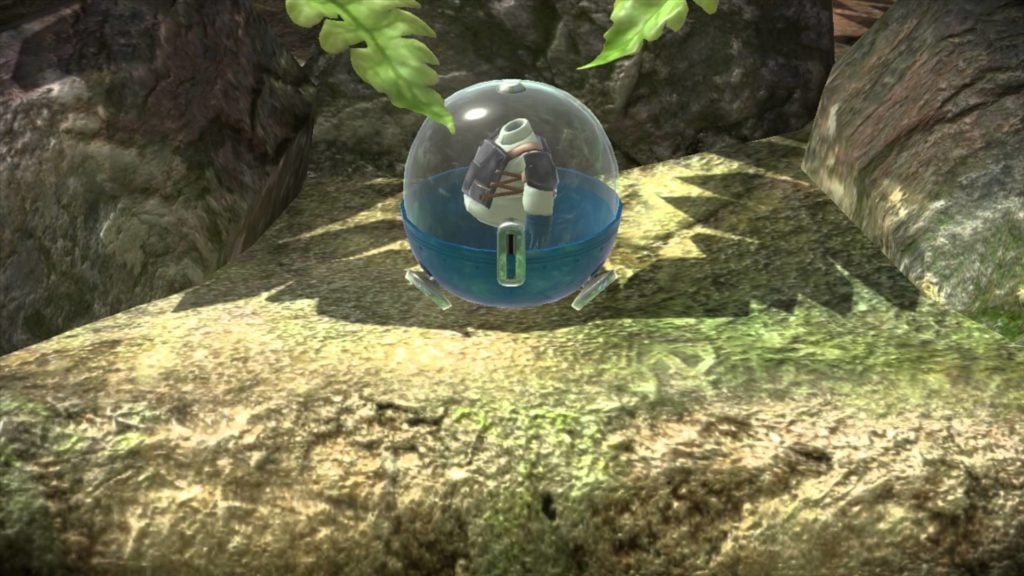 Red Pikmin are introduced right after Alph’s crash landing at the beginning of the game. As in Pikmin 1 and 2, they are a solid “default” Pikmin defined by their strong attack power and fire resistance. Their only downside is that they feel lacking of a special ability. Having an equivalent to the Yellow Pikmin’s ability to conduct electricity, for example, could have made Red Pikmin feel more specialized. The only item on this stage is the Metal Suit Z, which decreases damage crew members take. It’s more useful and easier to snatch than the pitiful Anti-Electrifier, but it never feels too helpful since there is so rarely risk of a crewmember being knocked out. Finally, players encounter Bomb Rocks here for the first time, and they are a joy to use to both explode concrete barricades and deal heavy damage to enemies. However, if Bomb Rocks had their own icon on the touch screen it wouldn’t be so easy to lose oodles of Pikmin to an accidental Bomb Rock throw. 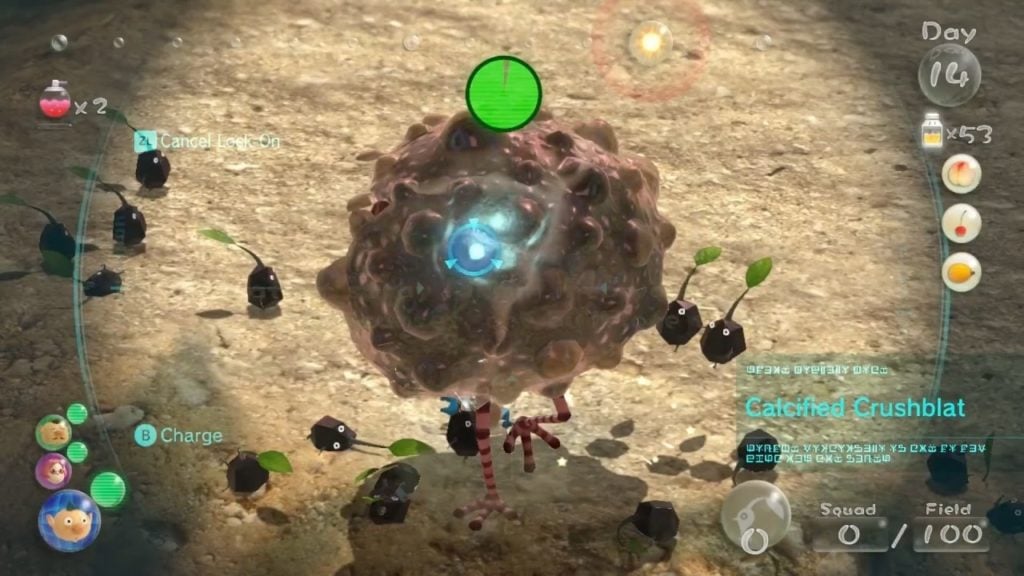 Tropical Wilds is home to twenty-three enemy types, but the vast majority are reused from previous stages. In fact, there are only two enemy types here not in the Garden of Hope or the Distant Tundra, the Calcified Crushblat and the Flighty Joustmite. While the Calcified Crushblat is a great example of the visually clear but distinct enemy design the game can use more of, the Flighty Joustmite is essentially a common Joustmite that sometimes flies. This total lack of area-specific enemies exacerbates the Tropical Wilds’ lack of identity. Adding insult to injury, the area’s mini-boss is yet another Shaggy Long Legs, made to appear different than the one in the Distant Tundra because it divides its time between two arenas separated by a wall rather than two halves of one arena, one of which is underwater. These tricks to disguise enemies don’t work — they almost all feel copy-pasted into the stage, and not a single enemy suits its tropical locale. 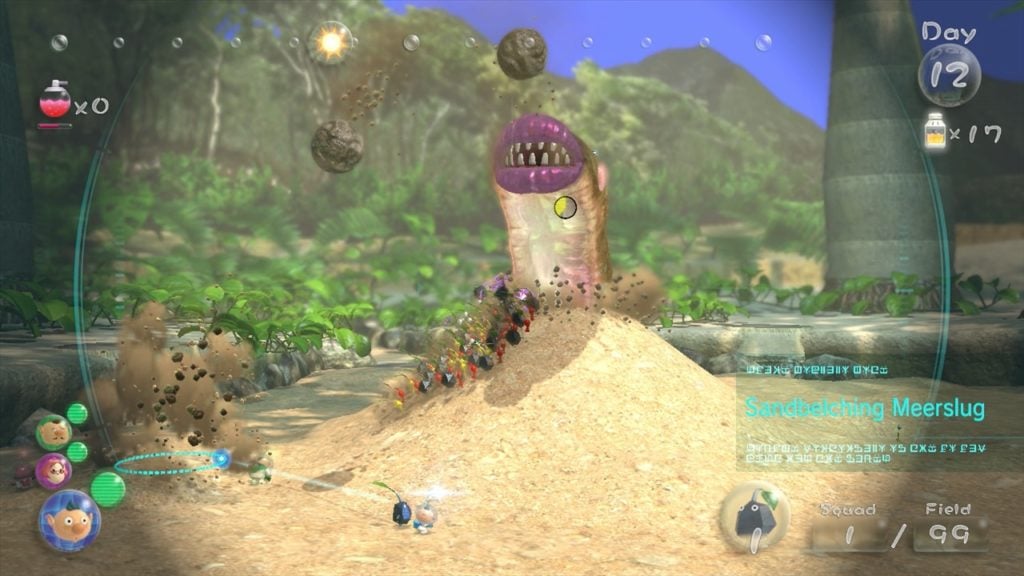 Despite this hackneyed enemy collection, the Sandbelching Meerslug is one of the best battles in the series. Unlike some bosses, it has a diverse array of attacks, all of which are telegraphed and have a clear AOE, which makes the fight feel consistently fresh and fair. As the fight continues, he gets fiercer and faster, making the fight increasingly intense. The couple of diggable mounds outside the arena are also a nice touch, although it would have been more fun if they held Bomb Rocks, since the boss is susceptible to a Bomb Rock “short cut” most players will probably never discover. Finally, the Sandbelching Meerslug is integrated with its arena so that its movement and attacks alter the layout of the arena itself, making for an especially dynamic fight. It is, however, a little disappointing that beating the boss only earns yet another cell phone that directs the crew to their next destination. It’s a lame reward that emphasizes just how tacked-on to the rest of the game Tropical Wilds feels.

The Tropical Wilds is one of Pikmin 3’s low points. Because Pikmin 3’s core gameplay is so delightful, many players probably breeze through this level without noticing its many blemishes. But upon closer examination, it feels unusually lazy for a level made by Nintendo EAD. It is a wonder why one of the game’s five levels would so intimately ape aspects of other levels’ design. And in almost every regard, from narrative, to thematic integration, to art direction, to enemy design, there is significant room for improvement. Whether this is the case due to a lack of direction, development crunch, or merely a series of innocent mistakes, the Tropical Wilds is a disappointing region despite an exceptional boss battle.

‘Pikmin’ Level by Level: The Forest of Hope