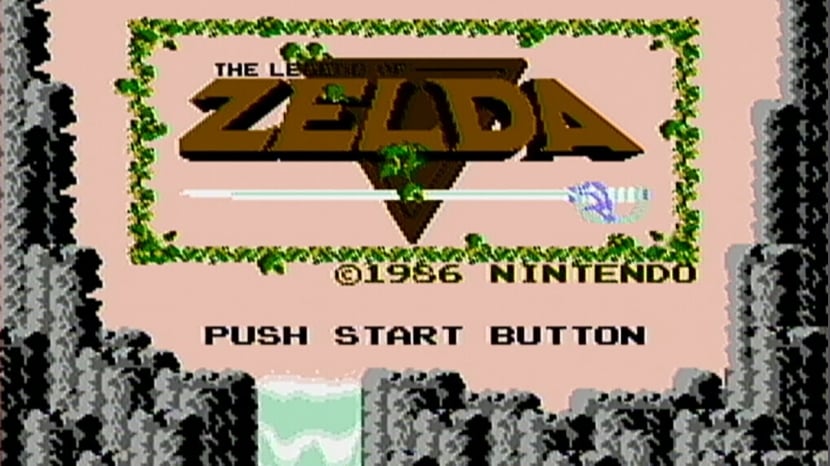 Sudden consciousness; it takes a while to get used to the jolting disorientation of unfamiliar surroundings. No idea or understanding of where one is, what’s beyond the small field of vision. What to do, which way to go- these are complete mysteries, but it’s time to start making decisions.

So opens Nintendo’s seminal masterpiece, The Legend of Zelda, and so too this is how any young life begins. The world we are thrust into is one of wonder and danger alike, often at the same time; everything is new, and with no prior knowledge or experience with objects and strange beings populating the environment, it can be hard to tell friend from foe without potentially sacrificing some health. Just because something looks like an innocent rabbit or a spider/Q*bert hybrid doesn’t mean it’s harmless, and so we all must learn the rules in order to stay alive. That process in itself is an adventure, and a big part of what the original Legend of Zelda does so well: recreate that child-like feeling of discovering one’s place in the universe for the first time, and in doing so awaken the youthful nature in millions of gamers of all ages.

How Nintendo decided to start the game off is a perfect example of this idea. The black screen parts like an eye opening to reveal the world, Link standing in the middle, staring blankly back at the player. With no explicit direction on what to do next, staring back for a moment or two is not an uncommon reaction. It’s not easy for a child to find their bearings in the world; confusion is a constant, and being suddenly thrust into situations in which one must quickly adapt and fly by the seat of their pantaloons is the norm for a long time, until the age and experience begin to peel away at that naivete, layer by layer. Putting players starkly in this position from the onset works well to level the playing field; everyone is at square one, everyone is reduced to a state where they have little understanding. Deep down, we all surely remember what that was like, and if not, games like this serve as a wonderful and humbling reminder. 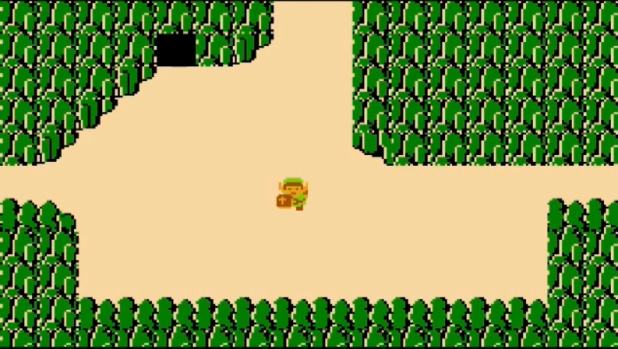 And so now it’s time to learn, time to grow. Human beings come with a wide variety of personalities, and so The Legend of Zelda acknowledges that by offering a number of options for the many Links to begin their great journey. This is, after all, how the world works; we are not set on a linear path, scrolling from left to right with no chance of retracing our steps. The first screen lets the player know two things: one, that being alone they are safe, and two, that they have a choice. Adults face decisions every day, but most likely they can speculate at the outcomes, thus keeping life in a relative comfort zone. For a child or first-time Zelda player, however, choices can be stressful, even scary; passages leading in every direction are ambiguous at best. Clearly there’s more to the world than what we can see, but stepping out could be risky. Within mere seconds The Legend of Zelda has created a tension that hearkens back to younger days, to the kind of stakes necessary for adventure.

No doubt a college psych student could write a paper on what the choices we make on the very first screen of The Legend of Zelda says about our personality. Some people and gamers are born brave, and for the intrepid and impatient, exploration is certainly an option. Perhaps they notice that they are unarmed, unable to defend themselves in the slightest, which may have inspired an initial panic, and perhaps they simply don’t care. The sphere of youth is small, and curiosity about what may be outside the boundaries set by authority is strong, sometimes pushing. But the world, while full of beauty and wonder, is also a place of consequences, where it’s simply not enough to have heart(s). Premature wanderers in Zelda most likely discovered this too late, and were treated to a quick restart. Again the game is teaching: those unprepared for life will find themselves quickly destroyed by it. 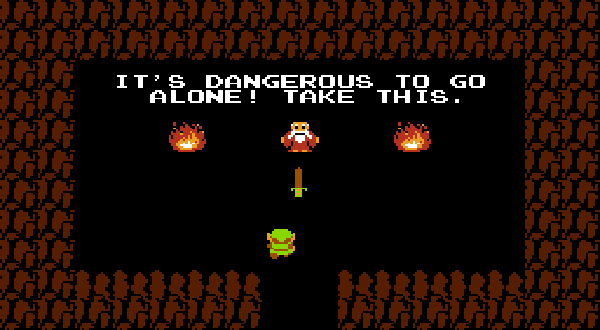 And so like any loving parent or video game developer, advice and assistance is available to those who seek it. Taking only a moment to assess the surroundings, and a collection of black pixels that breaks the pattern of green rocks or trees or whatever they are could mean only one thing: there’s a cave. Again, instinct could go either way here. Some might want to avoid such a dark place, but the image also mysteriously beckons, sticking out, needling and poking at our curiosity. Interestingly, most players found themselves naturally drawn to enter, and so they were treated to the best advice one person can give another when it comes to this world or any other: “It’s dangerous to go alone!” Those famous words, spoken by the archetypal Obi Wan Kenobi-style wise man, serve as an ominous warning as to what the hero can expect to meet outside, and while the subsequent offering of of a sword reinforces that, the generosity of that gift affirms that Link isn’t all alone after all. There is good in the world, there is help; one only has to find it.

And so the elements are in place, a great adventure is set to begin. Players now know what to expect in the quest set before them: confusion, fear, discovery, relief, danger, and kindness. Over the course of Link’s travels about Hyrule and its many dungeons, there will be many more instances of each of these, many battles and puzzles, but the first few moments of the game have already provided all the mental preparation needed to meet these challenges head on. Good mythology has the ability to touch deeper, darker recesses of the mind, evoking ideas and feelings in the simplest way possible, offering a perspective on the world and the human experience as a whole. The brilliance of the opening moments of The Legend of Zelda is how easily it does just that, capturing the feeling of youthful discovery, and readying players for the hardships and boons of the journey ahead.