So finally, we have been shown Nintendo’s brand new console, The Nintendo Switch. Now, the first thing that came to mind (apart from the joy of seeing what might be a new Splatoon) was the dreaded question; would this be a repeat of the Wii U? I’m going to do my best to compare the Switch’s debut to that of the Wii U in order to give us some idea of how much better this new console looks.

The biggest standout is the Marketing. The original Wii U trailer focused mostly on casual experiences, with games like Wii Sports and Othello of all things (which I’m pretty sure never got released). It showed people setting up at home to play the new console either alone or with friends. It was clearly still hanging on to the coat-tails of the Wii. The Switch, however, seems to be more directed towards hardcore gamers. We not only see Nintendo staples like Mario and Zelda but even Skyrim and NBA 2K. They even give the Splatoon section an e-sports aesthetic. Nintendo and Esports? It doesn’t sound like it should be a thing, but apparently, it is! Or at least Nintendo hopes it will be. And there’s no children or families in the trailer. It’s all focused on millennials. Which is exactly what a lot of people have been hoping they would do. 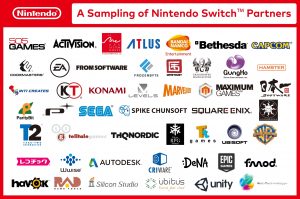 And just take a look at the Partners list for the switch. This is at least twice the size of the Wii U’s partners list! Some big names include Bethesda, EA, Ubisoft, and even From Software of Dark Souls fame. These are exactly the kind of third parties the Wii U was missing. While the Wii U released with barely any big games to it’s name, the Switch might be able to launch with Skyrim Remastered, among other big name third party games. Unlike the Wii U, it’s also launching with a new Zelda game and presumably a new 3D Mario. We have a console that could launch with third and first party juggernauts in its line-up. That’s the kind of coverage the Wii U wishes it had.

The Wii U was primarily focused on the Gamepad, and honestly I was a big fan of the Gamepad. It is actually very comfortable to hold, and the idea of being able to play games off-TV was a life-saver for a lot of people. It meant they could finally focus on gaming, without having to constantly bargain for time on the TV at home. But despite this, the Gamepad ended up being a missed opportunity. It can’t be more than eight meters away from the main console without disconnecting, which completely crushed any dreams of being able to play console games on the go. And some games didn’t even offer off-screen play. But with The Switch, those dreams have been revived. This is the natural evolution of the Wii U’s concept, with some extra flair thrown in via detachable controllers. In retrospect, it almost seems like the Wii U was simply a prototype for the Switch all along. 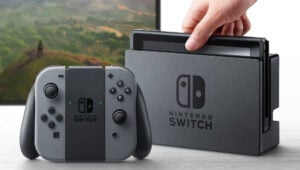 And while the portability of the Switch is its main selling point, it isn’t forced on you. There wasn’t a moment in the original Wii U trailer where the Gamepad wasn’t soaking up the spotlight. But the Switch’s trailer shows people just sitting at home, playing with a traditional controller, without even touching the portable component. While the Wii U wanted to change how you played with its second screen, the Switch accepts how you want to play, and gives you the option to keep doing that, while allowing the freedom to experiment with new but familiar play styles. Whether on your couch or a park bench, the Switch aims to have you covered.

I’m happy to say that I’m quite excited for Nintendo’s new console. If first impressions are anything to go by, it seems like it’s doing everything the Wii U did wrong, right. With extensive third party support, a possibly huge line-up at launch, and a marketing strategy that finally focuses on the people who will most likely be buying the console. What do you think about the Switch? Is it truly a new day for Nintendo, or is history doomed to repeat itself?