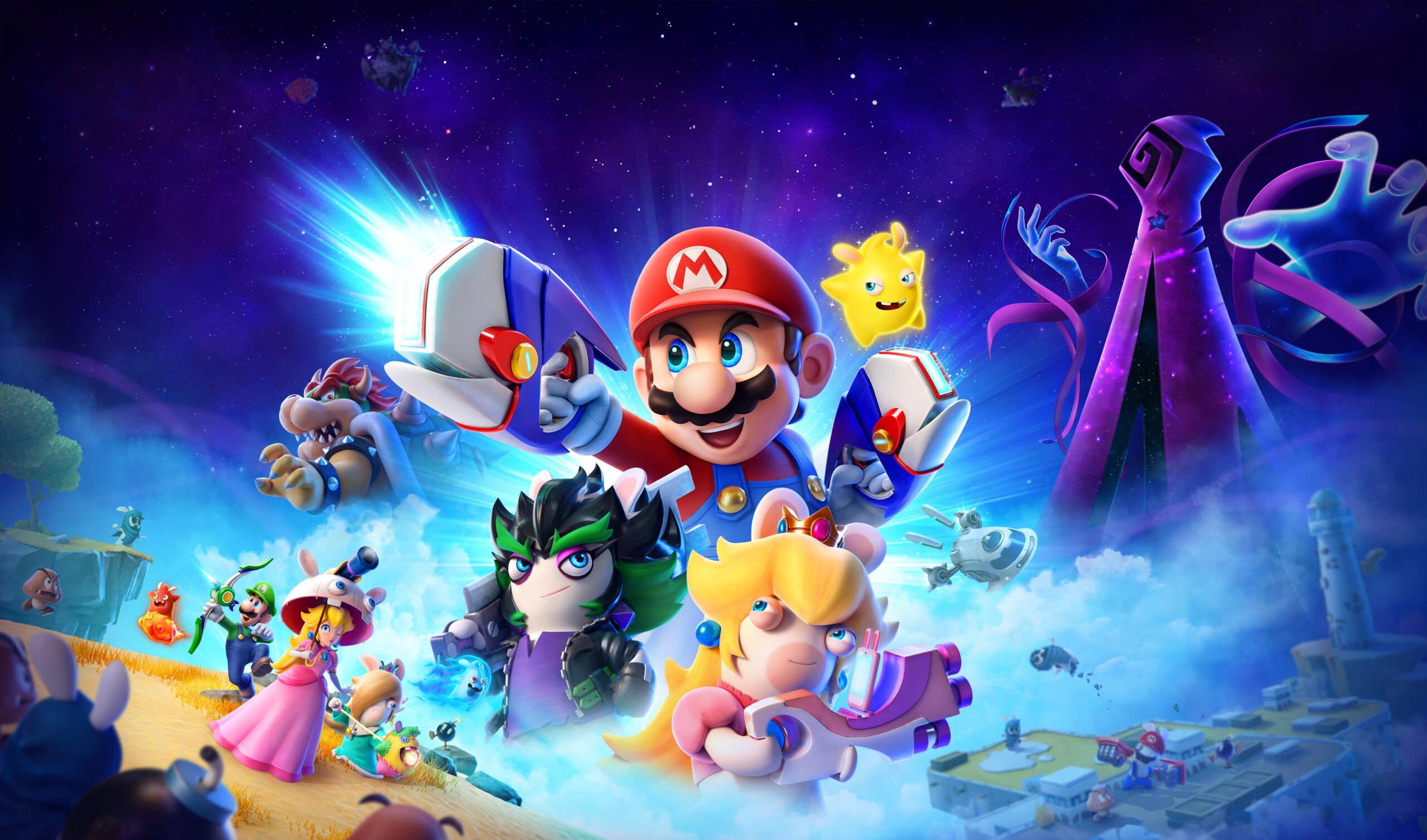 Back in 2017, Mario + Rabbids Kingdom Battle surprised Nintendo and turn-based tactics fans with a ludicrous and charming concept. The world-famous plumber teaming up with Ubisoft’s gang of goofballs, while wielding blaster cannons and bazookas? Mario and the Rabbids had each already ventured into many different genres, but Kingdom Battle had a distinct identity; it was seemingly as crazy as the two could get. When a sequel was announced last year, there was no doubt that the wholesome and emotional creative director Davide Soliani and his team at Ubisoft would deliver on continuing to expand their wildcard vision–and for the most part, they have succeeded.

While Mario + Rabbids Sparks of Hope is not a perfect sequel, it downright obliterates the original game’s gameplay formula by opening the door to a whole galaxy of possibilities. As the title implies, Sparks of Hope is the original Mario + Rabbids on a cosmic scale as the spinoff series continues to flesh out its tactics roots with a more modernized approach. It is far more ambitious than the first entry that was grounded in the Mushroom Kingdom, figuratively and literally. Even with a handful of light setbacks, the sequel’s refined gameplay helps the experience crash through its own hurdles, even long after it reaches the campaign’s finish line.

Back With a Big Bang

Mario + Rabbids Sparks of Hope takes place directly after the events of Kingdom Battle. Like with every Mario game, there is no need to play the last entry to enjoy this one. After Mario and his recent Rabbid friends spend some peaceful time together in the Mushroom Kingdom, an alien threat emerges from the sky one day, chasing after a hybrid species between Lumas and Rabbids called Sparks. Upon engaging with Cursa’s forces, a growing threat and user of Darkmess Energy, it only takes one confrontation for Mario, Rabbid Peach, and a majority of the old gang to all be united with the help of Beep-O and his newfound AI companion Jeanie.

Similarly to Kingdom Battle, the player’s goal in this sequel is to go from battle to battle with the purpose of defeating Darkmess Energy-controlled enemies, saving Sparks, and collecting purified crystals to power your ship’s hyperdrive. Of course, along the way, players will also help inhabitants with their side quest missions and complete a variety of puzzles that are balanced well enough to be light brain scratchers. The gameplay loop is almost fundamentally the same from the last entry, yet the change in a handful of mechanics using real-time elements and more control makes for a far greater experience. Simply put, Sparks of Hope demands players to think harder than they would in Kingdom Battle. All of this is thanks to the addition of two basic yet shockingly deep mechanics: directional control and a role-playing element involving collectibles.

In both the overworld and battles, players are no longer locked to a birdseye grid view. Instead, they have been given a new form of free-flow movement rather than the more genre-traditional Beep-O cursor. While players can still move characters one at a time across each terrain, players can now instantly switch between characters with the d-pad and meticulously make moves as they traverse the area with a larger sense of synergy. The first Mario + Rabbids did want players to make complex moves by going back and forth between character actions, but Sparks of Hope is on another level as the unlocked movement urges players to explore a floodgate of possibilities to experiment with.

With this simple change in control, exploration has been made more fun while combat has become vastly more dynamic. Not only does this style of basic movement feel more immersive, but it also helps keep the gameplay looking a lot less visually confusing for those less experienced with the genre. In Mario + Rabbids Kingdom Battle, there were plenty of control quirks that oftentimes made moving each character a little clunky. With the ability to move characters in a 3D space (with full directional control), every problem involving Kingdom Battle’s Beep-O cursor has been removed.

The new real-time elements are fantastic, but they are not even the cherry-on-the-top addition to Mario + Rabbids Sparks of Hope’s gameplay; that honor goes to the Sparks system. As mentioned before, while traveling from world to world, one of the player’s main objectives is to rescue Sparks. These cute hybrid creatures provide a variety of special abilities that continue to explode the number of potential strategy options at the player’s disposal. Each Rabbid Luma pertains to a special ability and causes one of five super effects, with a few returning from the last game. Adding super effects may be nothing new, but the extra customization options greatly enhance what Sparks of Hope has to offer in creating strategy.

To top of all the great gameplay improvements and additions, Sparks of Hope has a drastically upgraded user interface that not only feels fitting of the setting but also its game genre. Kingdom Battle was criticized for its by-the-numbers basic user interface, and thankfully Ubisoft’s developers went out of their way to vastly improve how commands and basic text are presented. The change to a more stylized look does basic visual wonders when pitted against the last game’s generic look and boring white boxes.

Likewise, the user interface improvements also extend to the game’s animations. Kingdom Battle may not have had the most pristine graphics for a Mario game on Nintendo Switch, but its version of the Mushroom Kingdom had an expressive attitude incomparable to other titles featuring the red plumber. Sparks of Hope only amplifies the charismatic approach Ubisoft took to making Mario and friends expressive as the visual art style has received quite a notable boost in detail, and character emotions continue to be flashy. Of course, graphics do not mean much without a good world to explore, and the game luckily has one.

For as wonderful as it looked, where Kingdom Battle often fell short was when presenting players with an immersive world to explore. In Sparks of Hope, each planet feels strikingly populated with battles, puzzles, and secrets to discover this time around. Each planet has a lot of elements that help keep them feeling lively and give players multiple reasons to comb environments for paths leading to different battles. Between characters and Darkmess Energy structures, there are always moments that make players want to point and say, “what’s that over there?” or “how can I get to that?” as they bounce from world to world, poking around corners and jumping into warp pipes.

Every Tactics Player is Bound to Make One or Two Missteps

Sadly, as great as the visual presentation of Sparks of Hope is, the sequel does take a few steps backward when it comes to the audio and writing. Despite its compelling line of musicians and prior success with comedy writing, the game can often falter in areas it previously had no trouble in. Even with some notable returning team members working behind the scenes, the production in terms of music and text, while not entirely bad, can feel quite lacking considering the talent on board.

For starters, it should be mentioned that the soundtrack of Mario + Rabbids Sparks of Hope is joyfully orchestrated. Grant Kirkhope, Gareth Coker, and Yoko Shimomura are quite an impressive trio of veteran video game music composers who have composed some of the industry’s most recognized tracks, yet Sparks of Hope never lands the same notes as its predecessor. Aside from the title theme and a few boss battles, the soundtrack never hits as hard or contains any real memorable motifs players will have stuck in their heads long after the credits roll. Additionally, there are quite a few areas of the game that feel oddly silent for no particular reason—especially some of the menus and secret areas that flat-out have no dedicated music tracks.

While the lack of a memorable soundtrack never was a distraction, my one major personal gripe with Mario + Rabbids Sparks of Hope is the fact that the game fails to conquer stale writing and bland humor that feels injected into every sequel entry in the Rabbids series. There are moments that will make players smile and laugh, but the amount of them can feel stale and lacking for those who fully completed Kingdom Battle. For a game bustling with so much visual personality and compelling character designs, the narrative feels oddly flat, uninspired, and lacking of true heart.

While Kingdom Battle was no narrative masterpiece, the game did have some decent dialogue and humor to help support what Ubisoft’s teams were trying to build. The back half of Sparks of Hope is significantly better than the first half when it comes to character interactions and jokes, but it takes quite a while for any of the newcomers to get interesting–especially the playable character Edge and the artificial intelligence companion Jeanie. Gameplay is obviously the focus of Mario + Rabbids, but it is a shame that the story lacks a lot of the simple joys that have fueled the adventures of both Mario and the Rabbids over the years.

On a side note, in terms of world-building, it is shocking just how small of a presence Mario’s world has in Sparks of Hope. While each planet is certainly immersive in terms of design and look, the game is overwhelmingly ruled by new Rabbid characters and locations. While this is absolutely not something that hinders the final product, it is a shame that Super Mario Galaxy and the rest of the franchise have had such a minimal influence on the game when considering how important the Lumas are in the story and gameplay.

Sparks of Hope feels like it should have more Mario involvement, but again, the lack thereof does allow the audience to experience a world-hopping adventure featuring a fresh slate of locations and characters. If the first Mario + Rabbids game was considered more so a Mario title, then Sparks of Hope will be considered a Rabbids one–and players should recognize that early on if they are expecting to see plenty of familiar faces, or they will set themselves up for disappointment.

You Won’t Doze Off Into Space, You’ll Be Captivated

Mario + Rabbids: Sparks of Hope is a worthy successor to the surprise hit that was 2017’s Kingdom Battle, as the galactic adventure-themed sequel just about surpasses its predecessor in every way. Even if it may falter in providing better humor and music than the original entry, a hindered presentation and story still does not stop Sparks of Hope from being one of the best turn-based action tactics adventure games on the Nintendo Switch–any fan of this genre will be locked in by the incredibly malleable gameplay battle formula being offered here. The talents of Ubisoft’s team are on full display regarding gameplay, level design, and animations, and that is what really matters most with this type of sequel.