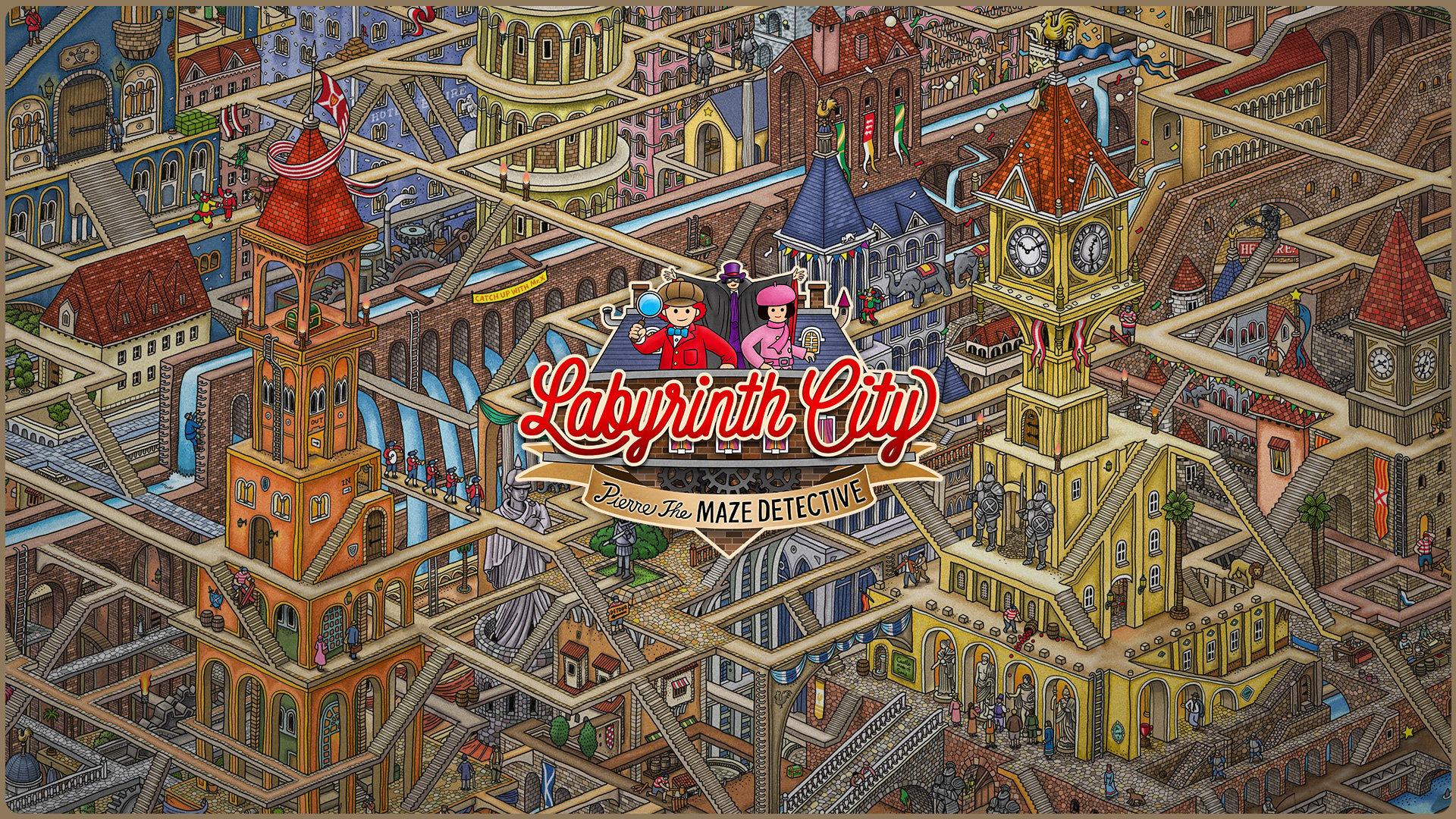 While there have been plenty of published works adapted into the medium of video games over the years, picture books have been an oddly strange outlier from the abundance of attempts. On paper, the visual-heavy subcategory of stories would seemingly be the perfect candidate for any book that can be converted into a game. In execution, Labyrinth City: Pierre the Maze Detective is living proof of that sentiment as it flawlessly manages to translate its illustrated history into a completely different interactive format. Almost a one-to-one recreation of its source material, Labyrinth City: Pierre the Maze Detective is a spectacular direct adaptation of Pierre the Maze Detective: The Search for the Stolen Maze Stone by Hiro Kamigaki.

Changing its former name to being the subtitle, Labyrinth City’s video game is focused on bringing the series’ first book to life in all its 36-page glory. It strives to never leave a single detail behind in its crammed atmospheres as it successfully can bring its physical pages to digital screens. Based on the plot of the book, when the mustache twirly Mr. X steals the Maze Stone at the Opera City Museum, a famous detective who solves mazes named Pierre and his best friend Carmen are called in by officials to traverse the forming labyrinths. With brand new cutscenes to fill in the story’s gaps, extra voiceover, and interactable details that were of course, never possible in The Search for the Stolen Maze Stone’s original release, Labyrinth City quite arguably makes the first book an inferior way to experience its grand scale of enigmas.

In the Labyrinth City picture books, readers are supposed to draw lines to complete various puzzles. The goal of the books is to find collectibles, meet characters, and, as to be expected, inevitably find a way through each labyrinth by using the available space that can be colored in. To replicate the exact feeling of perusing the books, the developers chose to have players travel through the linear paths with branching routes they normally scribble on. Imagine getting to move Pierre’s still artwork throughout the book’s mazes, but rather than leaving a solid line with a pen; you can backtrack your steps and never have to worry about interfering with the gorgeous artwork. In addition to the basic premise of finding a way to exit the maze at hand and finding collectibles, the game has been fully loaded with interactable objects, character dialogue, and easter eggs to tinker with.

Labyrinth City is not a game designed to be a quick race to the finish. In quite literally the exact style as the physical books, the game might be short for players who are just out to capture Mr. X, but completionists will no doubt spend well over two or more hours perusing the environments to uncover every collectible hidden within the game’s 10 mazes. Between bright yellow ninja stars, hint notes, miniature replicas, and trophies, there are well over one hundred objects to find throughout the game on top of more than 500 interactable objects to see move. It is extremely easy to get lost in Labyrinth City’s promise of adventure, and that is thanks to the admirable atmosphere it presents that never feels short of being alive.

Labyrinth City is sprawling with detail and hidden easter eggs — some that were not even featured in the original book it adapted. The world constantly feels organic as objects and characters are wiggling around their compact environments with cheeky animations. On top of the visuals, though, the game’s original soundtrack comes in swinging with charisma as it fits the tone of its source material. It is not a soundtrack that is audibly spooky or mysterious. Pierre is exploring a bumping world with wacky characters and scenarios. The sound design perfectly captures this setting as it comes off as a cartoon cat and mouse chase rather than a grounded hunt. The culmination of everything in Labyrinth City’s presentation is a charming exhibition that is impossible to both not stimulate the mind and keep smiling at until the credits roll.

The only real fault with Labyrinth City is the fact that it has no replay value or end reward. Once again, there are a ton of collectibles and objects to interact with throughout the player’s total playtime, yet the compensations for their efforts are practically nonexistent outside of playing the game for fun — which is fine but, once again, a tad disappointing. There is a gallery where players can view all of their collectibles on one shelf and notes they discovered in a single book, yet these features show progress. It is a shame that the miniature collectible replicas, at the very least, do not feature any interactivity as the still images stay on the shelf unmovable. Nonetheless, it is hard to complain about a lack of reward considering the high quality of the title itself and the satisfaction to be found in figuring out each labyrinth’s total puzzle count.

Labyrinth City: Pierre the Maze Detective is a wonderful digital adaptation of Kamigaki’s original work. While the book may be targeted at children over the age of 8, its beautiful art, groovy soundtrack, and well-articulated puzzle design ultimately make its first jump into gaming something for everyone. It may stick to its original simplicity as it aims to convert previously drawn still images into a living interactive world, but the core concept of Labyrinth City’s book series is never lost or wasted. Developer Darjeeling has turned The Search for the Stolen Maze Stone into a whimsical video game wonderland that is further sprawling with creativity. It is an absolute surprise highlight of this year’s indie lineup of titles that will enchant fans of its tangible hardcovers and please puzzle gamers seeking a more laidback and chill collectathon experience. Labyrinth City: Pierre the Maze Detective is a near-perfect adaptation of its already glowing source material.