My girlfriend has no love for video games, and she loves Nintendo Labo. In the interest of full disclosure, we are both Crafty Nerds, as happy with a hot glue gun and a pile of felt as we are smooching at the local discotheque (that’s what kids do these days, right?). The lack of video games in our union is not a point of contention, it’s simply that I was raised to the tune of an 8-bit melody with a controller clutched in each hand, and she was not. But we both relish opportunities to connect, and in Labo we unexpectedly found a fun toy to discover together.

Sock puppet is neither included, nor is it my girlfriend.

I had my doubts about $70 worth of cardboard, but a $70 cardboard-video-game-date with my favorite person had much more appeal. The promise of folding cardboard sheets into interactive objects is pure Nintendo, but even as an avowed Nintendo loyalist, I feared that Labo might be a cardboard Virtua Boy in-waiting. I cherish Nintendo’s bewildering commitment to taking unexpected risks in the interest of fun, but for every Wii there’s a Power Glove in their heaping pile of weird tech. Despite my hesitation, I was intrigued and could sense the potential for Nintendo’s secret sauce hidden between these folds. I showed Joce the ad-reel for Labo and she was intrigued, too. “Want to try building one of the little kits with me?” I asked idly on our morning commute. “Sure!” she replied, always game if not a gamer, and I felt more assured in my forthcoming cardboard expenditure at least knowing that it would be the foundation for a fun time with the coolest lady I know. We had a Labo date.

Opening the box was the first signal that this would be a good date. “That thing is heavy!” she noted. She was right, the big box of Labo has real weight, I wished that I was unwrapping this box as an 11-year-old birthday boy, a feeling I’d return to again and again throughout our time with Nintendo’s toy.

From the moment we lifted the lid of the welcoming kit, we were struck by the stylish presentation. We rifled through the pile of potential cardboard wonders and marveled at each perforated piece. The color-coded slats are simply and beautifully designed with whimsical 1-color touches like little sea monsters hidden in corners – it all oozes subtle Nintendo charm. We couldn’t wait to discover what we’d create. 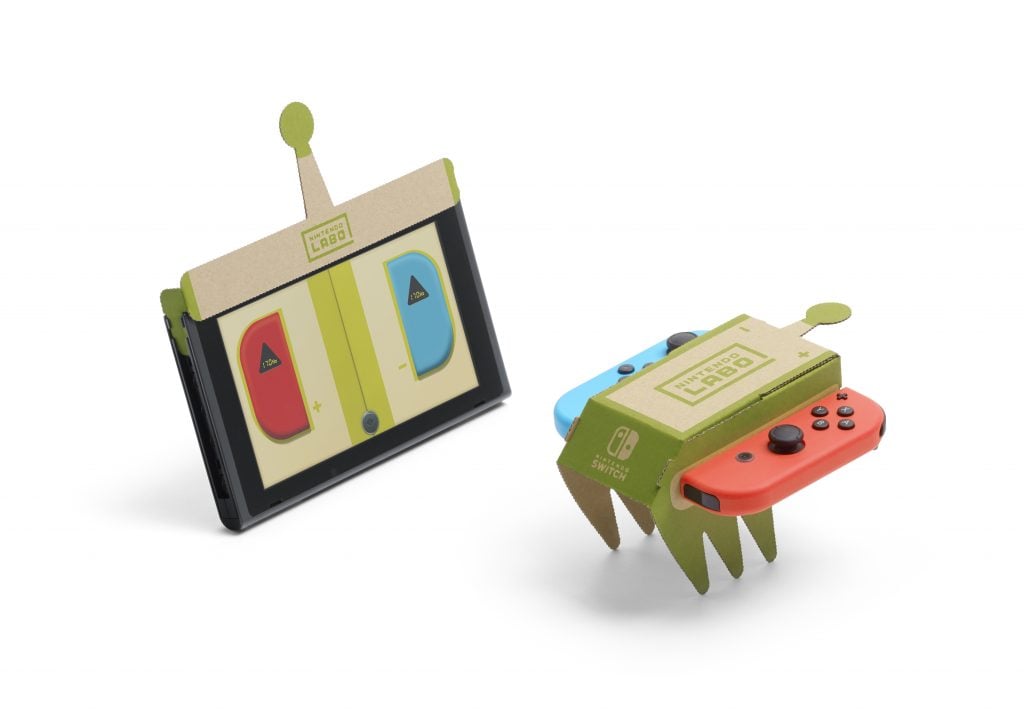 We fired up the included game cartridge and were surprised to find so much to do. The software surrounding the assembly of your little cardboard bits works so seamlessly that it’s easy to take it for granted. Both of us are Design-y Nerds as much as we are Crafty Nerds, and we were impressed by the attention to detail, and how well everything simply works. We were immediately guided into the sweet little tutorial that lets you build a little Joy-con Coozie, and we quickly filled our living room with cardboard buckets of smiles in addition to the countless chads.

Labo first gently guides you through the ‘Make’ section, wherein you fold and fold (and fold), and we dove into building the ‘RC-car’ with crafty enthusiasm. Among the projects, this is the simplest, and in many ways a more in-depth tutorial, it functioned to adapt us to the language of Labo and its potential without overwhelming us. We quickly made our little cars and immediately felt proud of our accomplishment (though in fairness the so-called cars turn out and act a bit more like little bugs than automobiles). Throughout our time with Labo, we were struck by the fact that it consistently makes you feel skilled – though it would take extra effort to do the kits wrong, you feel like a genius for getting it right.

After making, we were seamlessly guided into ‘Play,’ where we experimented with what we’d folded into life. ‘This is awesome!’ we declared in unison, high-fiving like champions as we experimentally revved the hertz on our joy-cons to make our little bug cars run amok. Our brains melted into a simultaneous puddle of glistening wonder when, with the push of a button, it was revealed that the little car has an IR camera built into it. “How the what now?!” we yelled to the stars, and raced our bugs around for an hour, much to the dismay of our dog.

The question of ‘how?’ was quickly answered, as Nintendo merrily pulled us on over from ‘Play’ to the ‘Discover’ section, wherein the thing we’d built and played with was picked apart via an interactive conversation with some quirky and endearing Nintendo Labo scientists. ‘Discover’ is effectively an engaging and lightly game-ified instruction booklet, where Nintendo plays that oldest of tricks on you and makes learning fun. “Save the piano and house for me!” Joce declared. We were both well convinced.

The pattern of having fun building, having fun playing, and discovering what makes your creation tick repeats with all of the other projects, and for us it continued to work. Due to the clarity of the instructions, the difficulty of their assembly never gets impenetrable, but it does take much more time to build the rest of the projects. But each kit is efficiently broken down such that they continue to feel surprising and rewarding – we were never bored and always excited to see our cardboard marvels finished, and then to play with and learn more about them.

In the end, Labo is more toy than game, and it should be noted that the ‘Play’ portion has its limitations. We loved the experience of building the cardboard creations and testing them out, but it’s unlikely that we’ll return to too many of the tech demos, though none of the experiences are so shallow that we ever felt like we’d wasted our time. They work well, look good, and are fun for the time you’ll engage with them, but they’re understandably limited in scope. The one semi-exception we were surprised by was the weirdly satisfying fishing game. The combination of the fake rod tension and balanced depth in fishing technique still has us wanting to capture the last few fish to fill our aquarium (and then to build more with the piano?). But even at that, I won’t be abandoning Stardew Valley or Animal Crossing any time soon in favor of cardboard fishing.

We caught a fish!

The things you build are in themselves nice pieces of industrial design, but their lasting appeal is equally debatable. Everything you fold and twist together is deeply satisfying to construct and then hold aloft like a cardboard trophy. But once your task is complete and you’re done experimenting, the question of what happens to your pile of cardboard creations looms. As wacky musicians, it’s likely that we’ll keep the toy piano in our studio, and possibly the little house as a fun reminder, but we’ll be hard-pressed to find room for all of our folded glories in our New York apartment.

All that said, we simply had a wonderful time with Labo. It’s the total experience of building the thing and then seeing it work well that made for a fun and rewarding time together. The journey is the thing, and that thing is wonderful.

Labo is not for everyone, but it is for us. We like building puzzles or Ikea furniture, or puzzles on Ikea furniture, and if that sounds like you (you know who you are), there’s a firm chance that you’ll enjoy this toy. And that’s the thing to remember, Labo is a more Lego than Mario, more toy than video game. It is best enjoyed with a craft-inclined friend or young person, and that fun won’t last forever.  But this particular brand of crafty fun is truly unique and wonderful in a way that only Nintendo could have uncovered, and both a hardcore gamer and non-gamer alike had a great time with it. For us, it was great fun, and we can’t wait for our second date with Labo.