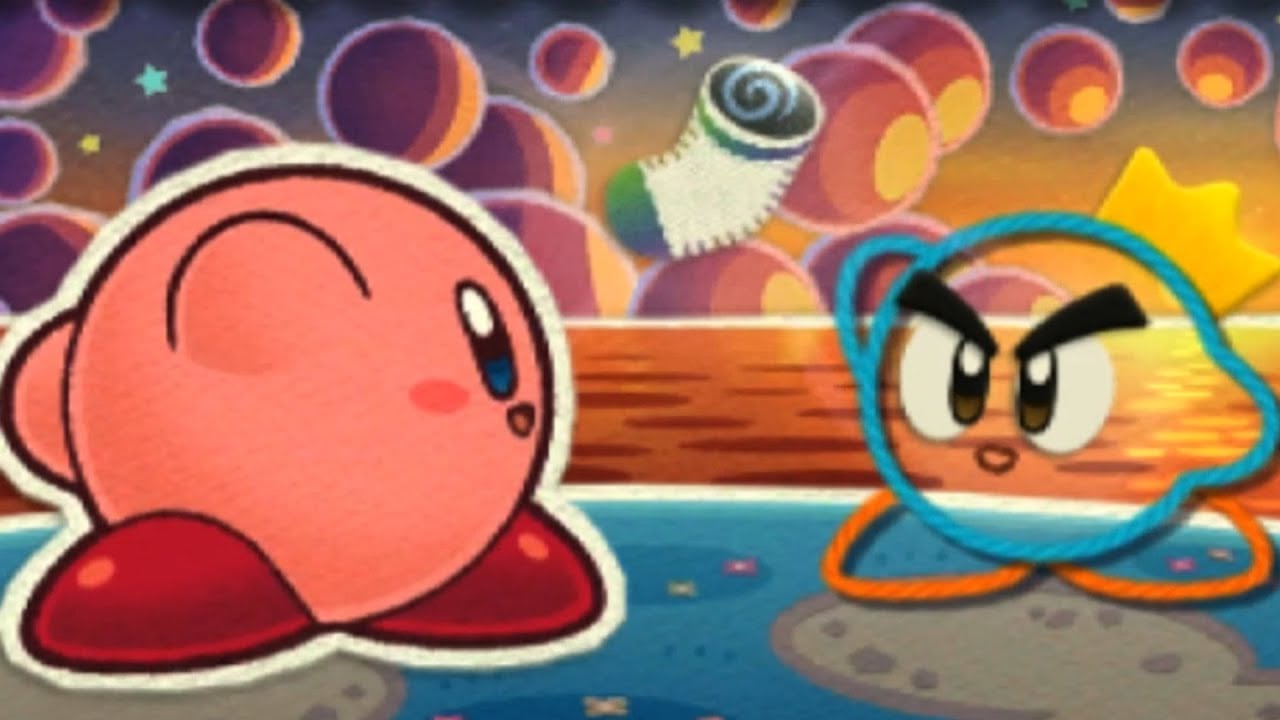 From a handful of excellent core entries, like Kirby and the Amazing Mirror on the Gameboy Advance, to recent releases like Kirby Star Allies on Switch, there has never been a shortage of new Kirby adventures for Nintendo fans. Enter Kirby’s Extra Epic Yarn, a port of 2010’s Wii title, here to add yet another dose of adorable Kirby goodness to Nintendo’s sunsetting 3DS.

The original Epic Yarn impressed critics with an innovative art style and loads of charm. The question remains, though: after nine years, does Kirby’s Extra Epic Yarn hold up as well as it did in 2010? Or has the yarn grown musty after nearly a decade in hiatus?

A Worn Aesthetic, but a Good Port

Nine years and two craft-inspired Nintendo titles later, the creativity displayed in Kirby’s Extra Epic Yarn feels limited; after seeing the yarn aesthetic taken to its natural limit in Yoshi’s Woolly World, Good-Feel’s original decision to craft Kirby — as well as most of Extra Epic Yarn’s allies, villains, and environments — out of hollowed-out yarn now feels a bit too conservative. When compared to its contemporaries, the textures in Kirby’s Extra Epic Yarn feel a bit flat, failing to stand out in a world of HD. While it Extra Epic Yarn does a faithful job simulating yarn on a felt background, what was breathtaking in 2010 feels tried, true, and done-better by now.

This is only exacerbated by the title’s lack of stereoscopic 3D. While the lack of that feature is expected, given Nintendo penchant for axing it in recent first-party titles, this is one of the few 3DS titles where its inclusion would have been advantageous. On a small screen with a low resolution, stereoscopic 3D would have helped Kirby not to blend in with the game’s flat backgrounds. In spite of this omission, however, Extra Epic Yarn remains one of the more graphically-impressive 3DS titles out there.

Part of that success lies in how the game has been ported. By now, Nintendo has obviously streamlined the process of porting from the Wii to the 3DS, and Kirby’s Extra Epic Yarn shows the results of years of optimization. I can’t vouch for how well the game runs on the original model of 3DS (I played it on a New Nintendo 2DS XL), but on newer models, Extra Epic Yarn maintains its 30 fps target, and hides it well. Given that the original model of 3DS came out only a year after the original Epic Yarn, it’s a noteworthy technical achievement for Nintendo.

The only apparent technical downside to the port is its lack of a 60 fps mode for New 2DS and New 3DS owners. It seems that time limits, low budget, or an unwillingness to further alienate original 3DS and 2DS owners could have been the limiting factors behind its omission. While the fps difference isn’t the biggest of issues in a series known for its slower gameplay, the omission is puzzling nonetheless.

What Makes This Yarn ‘Extra’ Epic?

Far from a being a simple port, Extra Epic Yarn adds to and subtracts from features present in the original game. While a few of these are pretty straightforward, such as the subtraction of co-op mode and the introduction of amiibo compatibility, others bear special mention.

Devilish Mode, for example, is a fun addition that serves well to address the original Epic Yarn’s biggest complaint: its lackluster difficulty. It doesn’t suddenly make the game hair-tearingly difficult, but it does add some fun challenge to an otherwise easy game. Similarly, a couple of mini-games starring series favorites King Dedede and Meta Knight help to break up the main campaign’s monotony. They’re not game-changers, by any means, but they’re a lot of fun in short bursts and — ironically enough — oftentimes more challenging than the main game.

Perhaps the most controversial addition to the game are Kirby’s new hats, or Ravel Abilities. In an attempt to compensate for the main game’s startling lack of power-up variety, Ravel Abilities swing the game even further in the other direction, making one of the slower aspects — eliminating enemies and bosses — even easier than ever before. It’s unfortunate that the Ravel Abilities weren’t balanced better with Epic Yarn‘s existing core gameplay, but they make for a fun addition nonetheless.

Slippery Controls, but a Good Heart

Another new feature (though not a good one) that Kirby’s Extra Epic Yarn adds is a series rarity: inaccurate movement. While the Kirby series has never been known for graceful, athletic platforming — or the maneuverability of say, Mario — Kirby has never felt more slow and hard to control than he does in Extra Epic Yarn.

The 3DS’ circle pad doesn’t help matters, making movements like sprinting (which requires a quick flick of the circle pad) feel mushy. With all the 3DS’ extra buttons — at least when compared to the original game’s control scheme — there’s really no reason why there couldn’t have been a run button. It could have easily alleviated the frustrating issue of whiffing jumps, one that crops up all the time when attempting to cross large gaps.

Kirby’s slow movement also causes problems with the game’s many moving platforms. More than a couple times I found that my whiffed jumps would make me miss a platform timer. While this doesn’t exactly make the game more challenging, it can serve as a point of frustration. Several times I missed a platform due to Kirby’s mechanics, then sailed leap-of-faith style into an enemy, obstacle, or hole, thereby losing the gems that I’d spent the entire stage collecting. It’s not exactly a fun experience.

Yet, despite these issues, Kirby’s Extra Epic Yarn is at its warm, fuzzy core an enjoyable experience. It’s a slow burn that’s relaxing for children and adults alike, where rushing from one end of each level to the other is far from the most enjoyable way to experience it. To fully experience this game as the designers intended, you need to aim at getting the collectibles in each level, slowly take in the environment, and try to collect as many jewels as possible.

This last point is perhaps where Extra Epic Yarn becomes its most challenging. While it’s impossible to die in any level, you’ll lose most of your jewels if you get hit or fall into a pit. When paired with the aforementioned Devilish Mode, some sections can get downright tricky, as you try to avoid losing the hard-earned jewels that you’ve collected throughout the entire level. While attempting to collect as many jewels as possible doesn’t suddenly transform the game into Darker Side from Super Mario Odyssey, it does give a little bit more challenge to an otherwise super-easy game.

That difficulty might be Extra Epic Yarn‘s biggest criticism. Unlike other core Nintendo platformers, such as the Donkey Kong Country or Super Mario series, nearly all of the challenge in Extra Epic Yarn comes from either the controls or the player’s own desire to collect everything. The levels rarely get more challenging, making for an unsatisfactory sense of progression and stalled excitement as you reach the grand finale. While Nintendo is known for crafting accessible games, Extra Epic Yarn feels like it needed just a bit more platforming challenge to make it more palatable for experienced genre gamers and fans of Nintendo alike.

As one of the last major first party releases for the 3DS, Extra Epic Yarn does fine. However, it feels like a strange time, from Nintendo’s perspective, to release this port. Perhaps they are wanting to draw in younger audiences whose parents bought Kirby Star Allies on Switch, or perhaps they just had some extra development time, and wanted to attempt to squeeze one more bit of profit out of the aging 3DS. Whatever the reason, and despite its good traits, Kirby’s Extra Epic Yarn feels like it’s a few years too late.