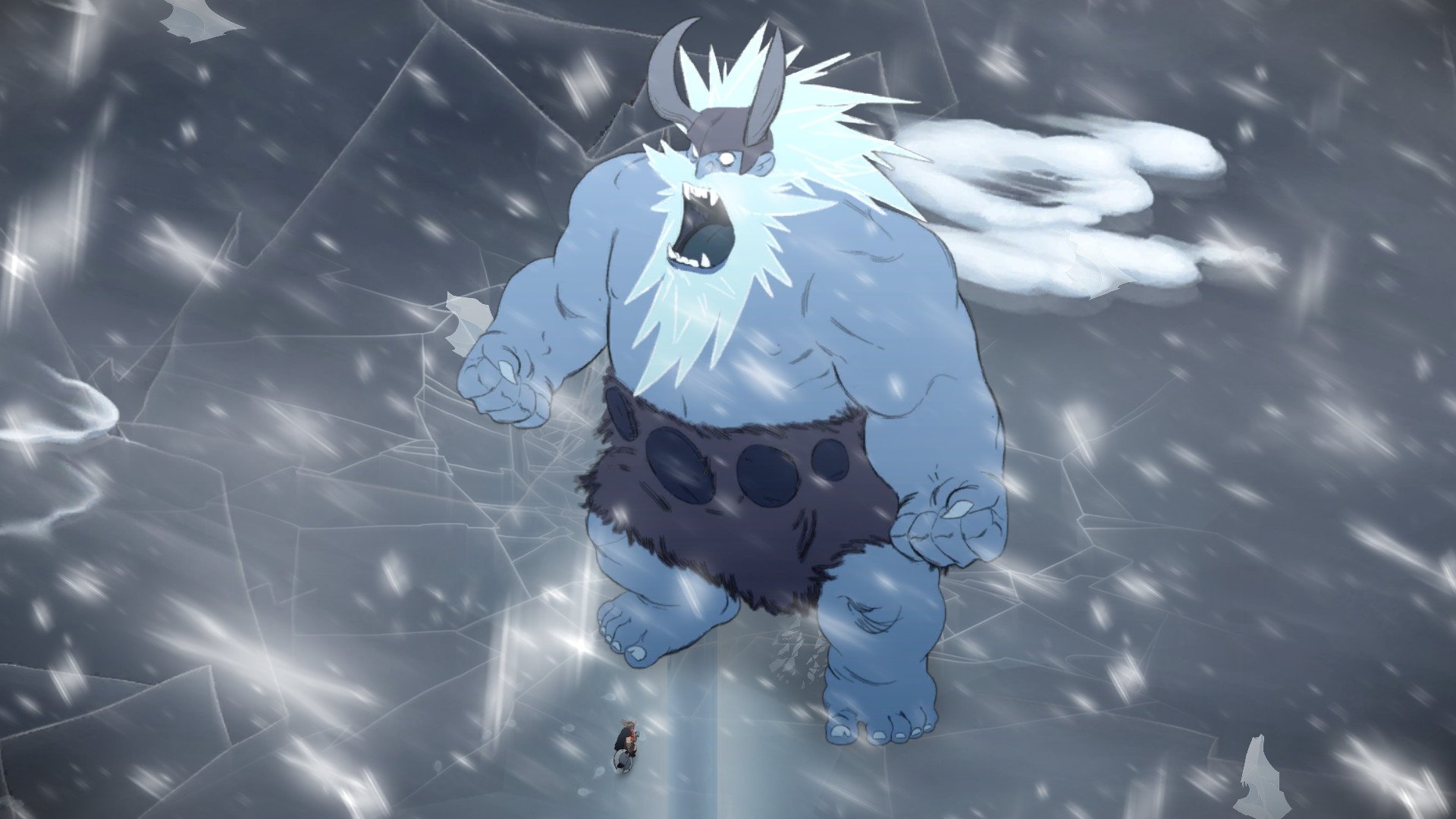 As prevalent as elements of Norse mythology are in pop culture, few games take direct inspiration from the tales of old quite like Jotun. There are no Marvel superheroes present, nor are the references to mythology as limited as, say, the name of the protagonist’s motorcycle, like Cloud’s bike, Fenrir, in Final Fantasy VII. Instead, Jotun: Valhalla Edition is a tale that immerses itself deeply within Norse mythology, told proudly and reverently, replete with hand-drawn animation and a striking, fully orchestrated soundtrack to match. The result is a gorgeous, engaging, deliberate, and even educational adventure through the realms in the hopes of reaching Valhalla. Named after the thunder god himself, Thora is a sturdy Viking warrior who’s regrettably killed at sea, eliminating her chance to reach the warrior after-realm of Valhalla. Her life well spent in glorious combat doesn’t go unnoticed, and when Thora finds herself in the primordial void world of Ginnungagap, she’s given a second chance to impress the gods and fight her way to Valhalla by defeating the monstrous, giant elementals, the Jotun. As the player carves their way through the Forest, Cave, Winter, Storm, and Fire realms, the backstory of Thora is gradually revealed, a narrative perhaps more effective and enticing than the game’s main narrative, and certainly more evocative coming from Thora herself in her native tongue. The result is a satisfying portrait of the tale’s fierce female protagonist who, rather than coming off over-sexualized or drawn pencil-thin, is strikingly human. Many developers could stand to take a page out of Thunder Lotus’ notebook.

The game takes the form of a steady-paced action/exploration adventure through the realms. Save the first region, the Forest realm, Jotunheim, each realm is broken into two stages and is completed by uncovering runes, at least one per level, which then gain the player access to the realm’s Jotun in the outerworld, Ginnungagap. The different stages feature a wide variety of different mechanics that prepare the player for the trying challenge of taking down each Jotun. The gorgeous hand-drawn animation truly brings every stage to life, and the soundtrack and sound design ensure each level is an atmospheric escape into a new land. While some stage’s obstacles are sparser than others, exploration is always highly rewarded. Hidden throughout each stage are the runes necessary to progress, a shrine endowing Thora with the power of a god, an apple of Ithunn bestowing more life, and Mimir’s Well, which operates as a checkpoint, heals the player, and restores magic. On top of that, each stage is littered with equally rewarding mythological sights and references that further shape this mystical trek through the realms. Players will come across sights such as Brokkr’s Forge, birthplace of Thor’s hammer Mjolnir, and the legendary dragon Nidhogg, gnawing at the roots of Yggdrasil, the tree that connects all of the realms. While the realms themselves might not pose too much of a threat to players, almost to a fault, coming across like relatively quiet (yet always engaging) journeys through Norse lore, the titular Jotun, who operate as the bosses of each realm, prove formidable foes that will truly test player’s skill and knowledge of game mechanics. Luckily, the controls are crisp, clean, and simple, limited to the four primary buttons, triggers, and bumpers. The Jotun themselves are as vibrant and brilliantly realized as the stages that precede them thanks once again to the art direction. Underneath that layer of artistry, however, lies a cleverly designed, complex, colossal monster equipped with an arsenal of abilities designed to tear Thora to pieces. The terrifyingly titanic scale of each elemental cannot be stressed enough. With the size of each giant comes a graspable attack pattern, but the sheer size of those attacks makes combat a challenge requiring a deliberate drumming on the controller, delicately dodging before carefully cutting at the heels of the Jotun with each opening. Even after memorizing the attack pattern of these mountainous monsters, timing is critical and each Jotun will certainly bring their realm’s hazards to the battlefield, providing even more to have to dodge and avoid. Consequently, combat is a chaotic, frantic fare and the exact opposite of the slower-paced strolls through the realms. The strength of the combat lies in the limitations placed on players. Thora has her own arsenal of abilities, powers of different gods bestowed on her at assorted shrines, Frigg’s powers heal and Heimdall’s powers shield Thora, for instance, but each of these abilities can only be used a very limited number of times. The primary resources at the player’s disposal are a dodge roll and a hefty battle axe capable of quick cuts or slower, heavier blows. Thora is not remarkably quick, especially in consideration of the gargantuan size of the Jotun’s incoming attacks, so carefully timed rolls, deliberately paced strikes, and frugally managed god powers become critical. In this way, the combat helps shape the narrative almost as much as the narrated moments as Thora comes off as exceptionally human in comparison to her enormous adversaries. The sense that Thora is truly a tough, tenacious, and determined protagonist becomes all the more clear through the game’s combat. Despite often being enormously challenging and occasionally frustrating, the fights, with their patterns and hectic, rhythmic flow, always seem fair in the end.  Players will come to Jotun for the breathtaking artistry, the carefully woven narrative in the tapestry of Norse mythology, and the exemplary female protagonist, but stay for the frenzied boss fights. Recognizing the strengths of their game, developer Thunder Lotus included the Valhalla Mode in the Valhalla Edition of Jotun. Valhalla Mode is a boss rush mode featuring even more formidable versions of Thora’s foes, truly designed for players as obstinate and dogged as the game’s protagonist. It’s just one additional feature on top of the mythical narrative and hand-drawn art that makes the entire experience reminiscent of an illustrated storybook and makes Jotun: Valhalla Edition impressive to both the gods and the audience.