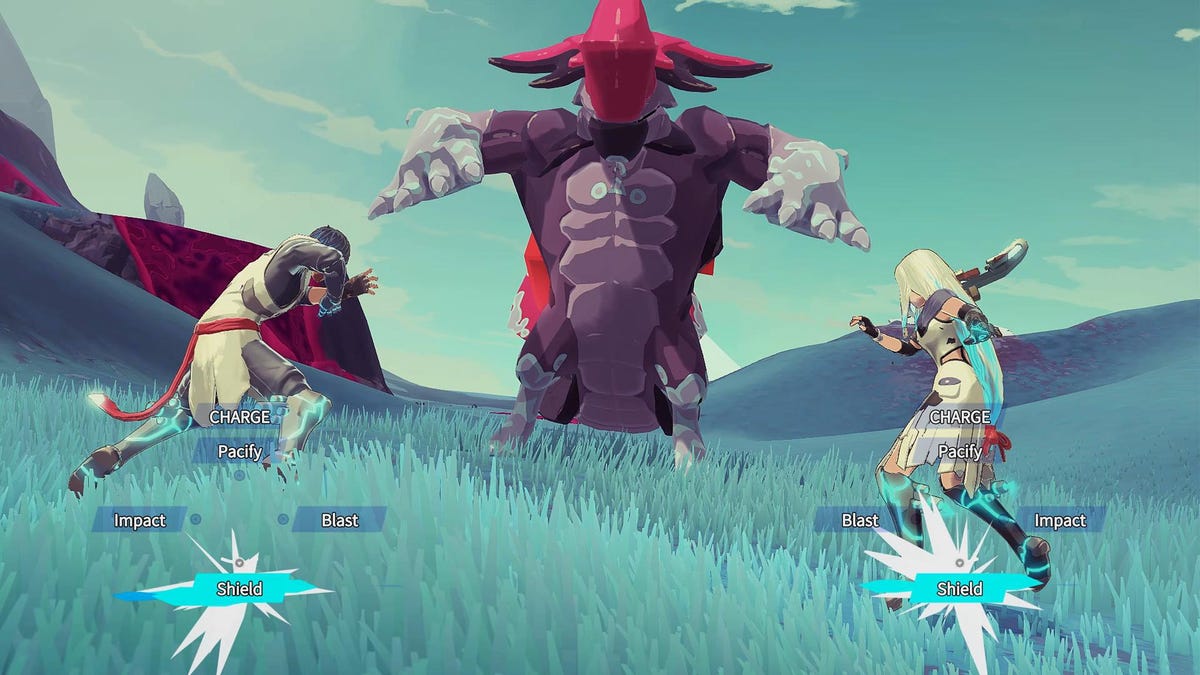 I knew I was in for it when I began playing Furi, facing the first boss of the all-boss combat. It served as the tutorial of the game, and I was learning to use my energy rifle and parry with my sword in high-energy combat. Yes, it was the first guardian of the off-world prison my character was trying to break out of, but how can the opponent’s health be diminished after a couple of swings of the sword? Quickly, the masked boss rose back up, mocking and laughing with only one out of seven health gauges blanked. This quickly discounted any thought that this was going to be an easy game.

That first opponent would be one of eleven challenging, climatic boss battles, each one having different back stories and unique combat patterns. Your character is equipped with an energy sword and gun complimented by the ability to dash and parry attacks. And there are a lot of attacks. Numerous waves of energy blasts, knock-down barriers, and close-quarters sword combat constantly tested my focus and drained my character’s health.

You don’t know too much about your character’s background story at the beginning. He’s imprisoned and your job is to help him escape the impressively guarded prison. Your only way to do that is to defeat and kill the guardians, and it never veers off from that core idea. The way Furi keeps the main character silent hides most of his backstory. Hints about why you were imprisoned are in dialogue from the guardians and the rabbit-masked guide (who’s walking you through your escape, literally), but the rationale for his imprisonment presents itself at the end. It’s an unexpected ending and one that’ll make you think twice about your final decision.

Gameplay and controls are laid out simply, and in a good way. There are two buttons for your sword and dash/dodge, and the right stick fires your rifle. You can charge each by holding down their triggers (R2 for the rifle), and that’s pretty much it. Anything more complex would complicate the game and make the challengers even more difficult for different reasons.

You have three health bars which will always be less than the opposing boss. This sounds unfair, but the more comfortable you become with the combat style, the less terrifying the bosses seem. They test your skill, as each boss gets tougher and more cunning to defeat. Make no mistake about it, you’ll fail. You could be a couple of strikes away from advancing before your final health bar is gone, yet your failure just creates further desire to improve your skill. And since the core of Furi is predicated around the boss-only mechanic, your defeat simply returns you to the guardian who was responsible for your demise.

Furi’s strongest aspects are the way it looks, feels, and sounds. The first thing that jumps out from Furi is its immense graphics. You can see the inspiration from Afro Samurai creator Takashi Okazaki. The colors are vibrant, from the bright white color of the protagonist’s hair to the array of red, blue, and green bullets that bosses spray. The patterns of colors assemble so perfectly that I would catch myself gazing too long before being knocked back by the vibrant attacks. The animation is just as stunning. Each boss is carefully detailed with unique characteristics related to their name and stage. The Scale, whose stage is set in a swamp, has an array of dark and bright green to match his amphibian-like exterior.

My favorite guardian was the sixth boss, The Song. Her appearance, soothing voice, and rich world filled with vivid colors and lush water fountains remind one of Mother Nature. Making your way to the boss is beautiful in itself. You walk through her temple on an elevated winding incline past giant moments along the way. You want to continue fighting to inevitably bring about her demise, but you can see your character thinking and hesitate because of the boss’s calm demeanor.

The soundtrack goes hand in hand with the gameplay, and each battle has intense tracks from established synthwave artists that are worth appreciating on their own merits. Their implementation is elegant too, with music ramping up as the battles begin and fading out as they finally come to an end, and you never hear the same song twice. Each boss, each stage, and each cutscene has its own unique music.

I enjoyed playing through developer The Game Bakers’ 5th title. Even after the credits, I was pleasantly surprised to see Furi carry on to an enthralling ending. There’s not much to dislike. Cutscenes drag on a little long, and there’s not much reason to go back once the campaign is completed, yet Furi’s challenging bosses, amazing presentation, simplistic gameplay, and slowly-unraveling story swallow any minuscule drawbacks.