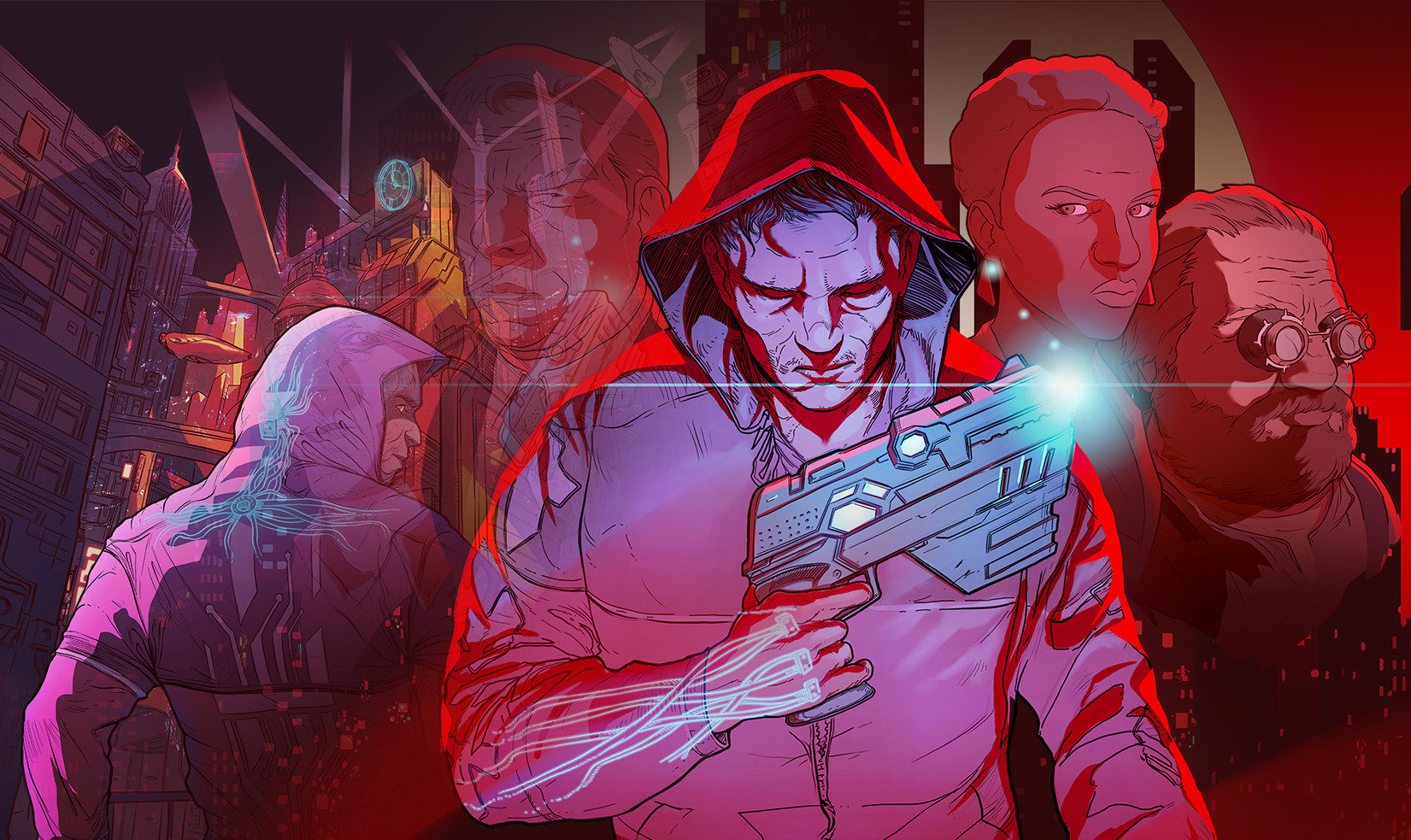 Over the years, few video games have tried to replicate the feeling of bringing a comic book to a playable space with all of the quirks and specialties of the still medium intact. While there are a handful of wonderful games like Metal Gear Solid: Peace Walker and even MadWorld, those are titles that have merely taken a visual and cinematic inspiration from the source rather than try and replicate it. Foreclosed may be one of the first games there is to fluently nail how you would imagine a modern comic book to play out had it been directly adapted into the genre of action-adventure games, but outside of that high honor, it fails to provide much else.

Foreclosed follows the story of a wrongfully punished man named Evan Kapnos that lives in a future cyberpunk city of ID-tagged civilians. As his identity is foreclosed and he is stripped of his job, brain implants, and access to the city block-chain, Kapnos attempts to escape from the authorities before his identity and artificial contents can be auctioned off by a private tech company. Foreclosed may present a spectacle of ambitions, yet it is not successful in terms of delivering on many of its promises. It finds itself in a position where gameplay and story are vastly underdeveloped in the face of its impressive visual stylization that conclusively can not hold the rest of the title up.

The gameplay of Foreclosed upholds that of a bland third-person action game. It is keen on providing the same gunplay and pattern puzzles within various environments for its entire runtime. Even with the introduction of a customizable power system through unlockable brain implants and a symbiotic pistol, Foreclosed has a variety that is artificial. It sticks to the same tedium of getting caught in a sudden shootout with the same two enemies, solving a formulated randomized puzzle, maybe hearing some exposition, and then rinse and repeat.

While the puzzle-solving may present the same exact actions of inputting patterns with the d-pad or occasionally moving a cargo crate, the combat unsuccessfully attempts to mix up the stale formula through abilities that not only do not provide much but are heavily unbalanced. To defend himself against the police and private security threats, Kapnos is armed with a pistol and cybernetic implants that can be upgraded through experience points.

There is a multitude of abilities the player can use to take out enemies such as throwing objects with telekinesis, however, for the majority of the game players will be acting on a shoot-to-kill basis. Considering almost all the implants are unlockable from the start, there is no reason not to go with the instant-kill options. The variety of abilities available shows promise on the surface but is never developed into a way of combat that players would want to go out of their way and utilize. The one obstacle players have to look out for when fighting aside from being shot is to not overheat their implants by overusing abilities. The cooldown system initially seems like a massive obstacle, yet it more so comes off as a nuance as the player is only left vulnerable for a few seconds upon overheating.

Obstacles outside of enemy fire are far and few, however, many of the game’s hindrances against the player are when it comes to accessibility inclusions. One of the many gripes players may have with Foreclosed is the fact that enemies have no visible health meters. Some hostiles are absolute bullet sponges and there is no visual indication as to when the enemy will drop. For a game packed with instances where the player is trapped in a room with a swarm of men to kill, the developers of Foreclosed could have added some simple quality of life features that would further enhance creating actual strategies rather than getting behind the nearest cover and blast away.

Speaking of quality of life features though, Foreclosed bafflingly lacks any accessibility options for the player to work with. Certain aspects you would expect to find in a standard third-person shooter are questionably not here. One of the most critical aspects of a third-person shooter taking place in a closed area is the simple option of being able to instantly switch between which shoulder the camera is placed on and even that is missing. There are dozens of instances throughout the game where the player will have to run into fire to get a clean shot due to a lack of any way to change the camera’s shoulder position.

The gameplay may be a poorly thought out and underdeveloped letdown, however, Foreclosed absolutely flourishes with stylization. Like an actual comic book, the game takes the opportunity to mess with its third-person camera through a multitude of panels that allows players to experience portions of the game from either unique or even separate perspectives. The gunplay action sequences are never utilized in this form, but there are notable chase sequences, monologues, and stealth setpieces that make great use of the idea. Best of all, the game always manages to nail the feeling of jumping instantly between different panels as the title loads seamlessly.

It is not even just the way in which it jumps between panels that is notable though. Foreclosed overall just looks classy as it blends cyberpunk staples that are well mixed together into a world that is bursting with inspiration from the likes of art created by Frank Miller and Geoff Darrow. Even the game’s user interface and heads-up display look cut and clean. An aspect of the aesthetics and atmosphere of Foreclosed that sadly does fail to meet expectations is the overall voice work. While no one is doing an inherently bad job by any means, the voice acting here is rather unconvincing and at times can really break the immersion.

Every voice is trying to fill a stereotypical type of tone and the result is something that feels more like a fan project with actors who had to phone in the work rather than a full-budget game. If anyone were to think of a “gritty action hero” or “shady businessman who is a bad guy” they could probably exactly imagine what Foreclosed has to offer from its voice cast. The story itself is already mediocre at best, but without actors that can properly deliver each line, you almost feel as if you would have had a better time reading the script than hearing it. At the very least, Foreclosed does make up for its lackluster acting with a great noirish score, but it is not enough to save itself from the culminated messy sound design.

Foreclosed is far from being great, yet it is an admirable bridge between a video game and a comic book adaptation. In comparison to its small competition that has strived to accomplish the same goal, Foreclosed manages to do a lot right in terms of stylization but feels as if it can be pushed to an unimaginable stratosphere with more development time and refinement. Unlike titles such as Liberated, Foreclosed manages to perceptively meet its high expectations as it smoothly plays out like reading or watching a moving comic book. However, its lack of a concrete story with memorable characters and fleshed-out gameplay elements leaves the title in a position where it is at the bare minimum worth flipping through on a sale price.