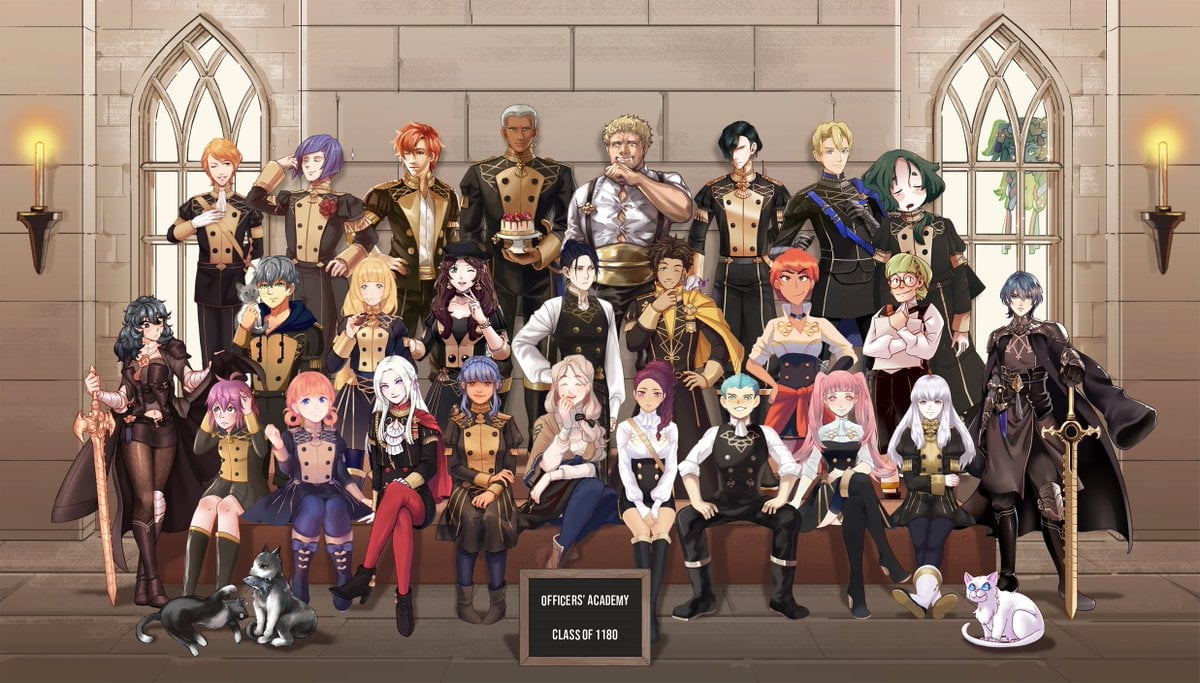 For many strategy games, balance is the most important aspect of building your team. Whether you like to aggressively attack the enemy before they attack you, or whether you stand back and defend your position before engaging, your style will dictate how you should balance your roster. This is no different in Fire Emblem: Three Houses, and with a large variety of different classes, how you play is entirely up to you.

With that in mind, it should be noted that my strategy will likely differ from yours, and as a consequence, my ideal balance will also differ from yours. Before removing your genitals in a rage at my preferred team for completing Fire Emblem: Three Houses, it’s worth knowing that I prefer to play a cautious game. Glass cannons aren’t a unit I enjoy deploying, and that includes many different strategy games, including Pokémon where popular favorites such as Blaziken and Lucario are too much of a risk for my style. Without flying too much off on a tangent, I will balance much of the team at around advanced level classes as every unit by the end of the game will be around that level, many will reach a master class but probably not all of them.

Strangely, for what is an attacking unit, the paladins can hold up against physical and magic attacks with much ease. I was often able to throw my paladin into a group of enemies without serious damage being inflicted. The paladin can deal great damage without taking too much back, which honestly, makes it the best unit in the game for me.

That’s not all, however. Paired with a lance for a weapon, you can really give it much flexibility. Many of the lances available are specialized, for instance, the horseslayer does it exactly what it says it does. Riding into battle with a different variety of lances means your paladin can deal great damage to many different foes, while employing the hit and run tactic that riding on a horse allows, means you can regularly move out of danger if necessary.

Another staple for my team. Honestly, I think I could win the game with a team of paladins and snipers alone; if it wasn’t for all the characters having unique personalities that get stimulated with different lessons, then I would have had a team of just paladins and snipers. But pressing on, killing an enemy before they even know you’re there has been a perfectly reasonable tactic in strategy games since the dawn of gaming.

Naturally, keeping a sniper out of harm’s way is the best strategy, and as your character ranks up in bow level, snipers are the rare exception where the combat abilities become more and more essential. Eventually, you’ll end up with a sniper that can take down one health bar with one hunter’s volley. As most monsters have two or three health bars, two or three snipers is enough to clean up on many of the monsters.

In many strategy games, I often find a lot of people make the mistake of neglecting health regeneration. Once again, you’ll want to keep them out of harm’s way, but having them about means you don’t need your attacking units wasting a turn to use a potion, allowing them to be replenished straight after engaging an enemy.

This is the role of the bishop in Fire Emblem: Three Houses. They call it white magic and it’s incredibly useful. It’s this kind of defensive tactic that actually allows the player to be more attacking. A solid defense allows the player to attack the enemy with minimal risks of being defeated. This makes the bishop the third-best unit type in the game as it allows you to be more confident when engaging a large group of enemies.

These two units both employ aggressive magic in different ways, but undoubtedly you’ll get a similar result. Different magic does different damage to different enemies, that much is conclusive, so to some extent, you would want one of each of these units. Magic attacks are extremely useful, particularly in chapter two where highly armored units become more frequent.

Once again, these are glass cannons and need to be protected from enemy attacks. That said, if an enemy does employ large amounts of armored units, they will probably be able to defeat them before they even pose a threat. I find them to be pretty bad against most monsters, a lot depends on the magic available. But I often found monsters to be the less troubling units in Fire Emblem: Three Houses, they take longer to bring down but don’t impose as much of a threat as enemy warlocks and bishops.

For a defensive strategy, these are fantastic in the early game. Essentially, physical attacks will do no damage and the return attack will be enough to defeat them. The problem is the late game where the enemy will use much more warlocks and dark bishops, which will easily defeat a fortress knight in one hit.

This means that a defensive unit that you want to use to protect other units becomes a glass cannon in the late game. Coupled with their slow movement, they will never be able to escape danger and you’ll be relying on your paladins to remove the enemy magic before they reach your fortress knight. I recommend only using this class in part one. Rather ironic that the defensive unit is one of the worst units for a defensive strategy.

I’ve grouped these five together as you’ll probably use them in similar ways. Often, the same character will be able to interchange between several of these classes and you can change the balance depending on your preferred style of play. In essence, they will be used to protect your snipers and magic units. They can usually withstand several different types of attacks and give a decent return attack.

The only difference is the weapon they use and different enemies will naturally have different weaknesses. I favored the hero and assassin classes as they had a greater variety of weapons, with assassins being extra useful with their high rank in the bow. The grappler was also used occasionally as I do enjoy how gauntlets can attack up to four times in one go. But again, it’s about how you play. I liked to use them to draw enemies in and away from the snipers and magic units. These five units are great for manipulating your enemies to move in the way you want them to.

A glass cannon that poses a limited attacking threat, easily the worst unit in the game. I would actually be interested in hearing from anybody that found this unit to be useful in Fire Emblem: Three Houses. It requires way too much protection and often most enemy unit types were drawn to it, ensuring its demise was quicker than your decision to move it.

The problem is both enemy bow and magic attacks will likely defeat a wyvern rider in one or two hits. It’s only advantage is its speed and ability to keep out of danger. With that in mind, it became a wasted unit, often just sitting out of harm’s way while everyone else did all the work. The only time I’ve found them quite useful is against monsters, particularly the final boss where it did the most damage.

To conclude, I could probably suffice with a team of paladins, snipers, and bishops. For a smoother game, I would include warlocks, assassins, and heroes that allow me to protect the snipers and bishops from being attacked. If I wanted to make the game difficult for myself, I would use fortress knights and wyvern riders. However, my playstyle might differ from yours so let me know your balance in the comments below.