The latest Final Fantasy has finally arrived, and after all these long years, the question on everyone’s lips is: can it possibly deliver on the hype? Well, the answer is yes, and no, and…yes.

With a game that has the kind of development history that Final Fantasy XV has attached to it comes a kind of reticence in terms of trying to peg down exactly how, and why, one feels how they do about the game.

If the ultimate question, a full decade later, is whether the game is “good” in a basic sense of quality, then the answer, in short, is yes, but that “yes” comes with a series of caveats that must be addressed in turn. 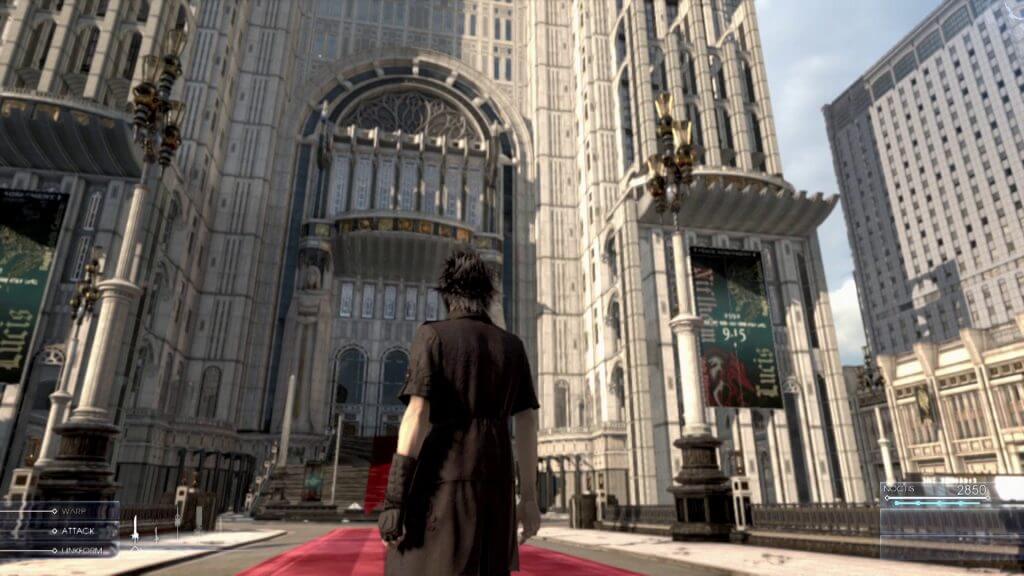 First up is the tone of the game, which is all over the place. Final Fantasy has a history of this kind of thing, with Final Fantasy VII’s central protagonist, Cloud, infamously cross-dressing to sneak into a brothel just a couple of hours before he unfolds his tragic back story to the main cast.

However, Final Fantasy XV compounds these kinds of strange and jarring narrative fluctuations by giving you free reign to an almost entirely open world from the outset. Like last year’s Metal Gear Solid V, Final Fantasy XV has made quite a shift from the series’ previous mainline title, shifting from an experience that focuses on story and scale almost exclusively for the majority of the game, to an entry that allows the player to dictate the pace and speed of the adventure with reckless abandon.

While this might sound great in principle, it makes for a slew of problems in practice. For example, if a player spends 5-10 hours cracking down on the dozens of side quests in between two major story points, they can easily lose track of what’s going on in the increasingly dense lore of the cross-media narrative in which Final Fantasy XV unfolds.

How does one make heads or tails of an adventure where you can be fishing one minute, and discussing the fate of the world the next? When you’re trying to deal with the stakes of losing your father and ascending to royal power to battle an evil empire, the experience can be very much derailed by pulling over for a selfie. 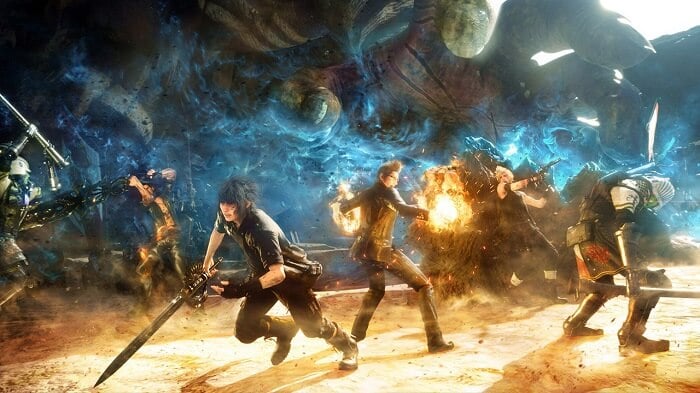 Problems similar to this crop up in every open world game to an extent, but never have they been so jarring as they are in Final Fantasy XV, first because of the series’ long-standing pedigree, and second because of the size and scale of the adventure a player expects from it.

Players expect a certain something from an official Final Fantasy installment, and as such, it is held to a different standard from not just other RPGs, or even other Square-Enix franchises, but even from other sideline, and main line, games in the franchise itself.

So where does Final Fantasy XV weigh in on the grand hierarchy of the series’ 30 year history? Only time will tell on that front, but let’s break down where the game succeeds and fails, shall we?

The battle system is as good a place to start as any. Drawing from action-RPGs in principle, FFXV‘s battle system seems to draw the majority of its inspiration from fellow Square-Enix alumni, Kingdom Hearts. The way Noctis zooms around one battle after another, crashing into and taking down enemies with reckless abandon, shows the clear influence of the original director, Tetsuya Nomura. 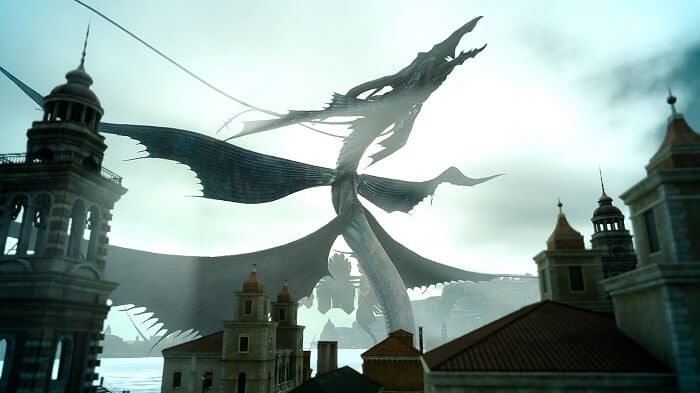 However, the battle system of FFXV lacks the polish that the Kingdom Hearts series learned to develop. With the camera regularly obscuring the vision of the player, and Noctis sometimes missing his objective, even on a precise button push, the battles can and will frustrate even the most stalwart of players.

This trend continues throughout several key aspects of the game. For example, a regular prompt will pop up for players to press the X/A button in order to achieve a contextual reaction such as picking up an item, or speaking to an NPC, only for Noctis to default to jumping instead.

Textures pop in and out at random. The camera sometimes focuses on a wall in the middle of a conversation. Colors blip in and out during cut scenes. On and on it all goes.

Now, in any other game these elements could easily be the writing on the wall for a clear and easy death warrant. Through some strange miracle, though, Final Fantasy XV manages to transcend it’s laundry list of regularly recurring flaws, and emerge with enough emotional gravitas to allow an almost complete dismissal of its glaring transgressions in favor of its strengths. 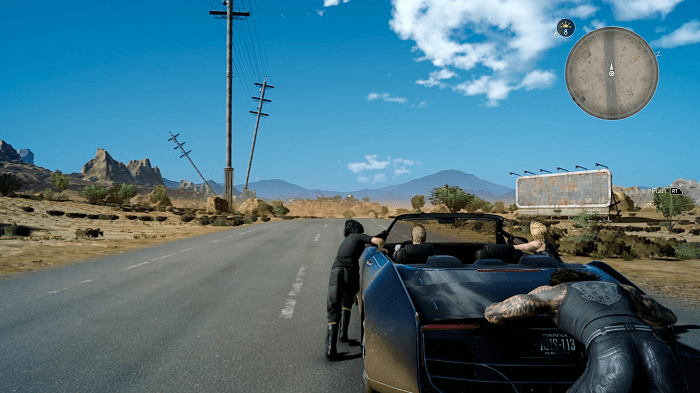 The stripped down nature of FFXV’s key cast allows for a level of rapport and character development that the series has rarely, if ever, seen. The bromantic nature of the central quartet lives and dies on a shorthand that almost always comes across as authentic, even when it grates. Think something like the 1986 coming-of-age drama Stand By Me as a parallel, and not a surprising one at that, as the main vocal theme of the game is a Florence and the Machine cover of the exact song for which the film was named.

In turn, the game calls back regularly to other games in the series, in its presentation, plot, and design. The villain of the story, for instance, is a clear amalgamation of classic series villains like FFVI‘s Kefka and FFVII‘s Sephiroth, while the magic system offers an obvious throwback to FFVIII‘s draw functionality. Meanwhile the four chosen warriors on a journey to regain the crystal is an assured callback to the roots of the series, as seen in FFI-V.

Final Fantasy XV skates on a clear coat with elements like these. The game knows exactly what it’s doing when it allows you to listen to classic Final Fantasy soundtracks during travel sections that might otherwise be a total bore. Yet somehow it works in spite, or perhaps because, of the obvious misdirection of strategies like these. 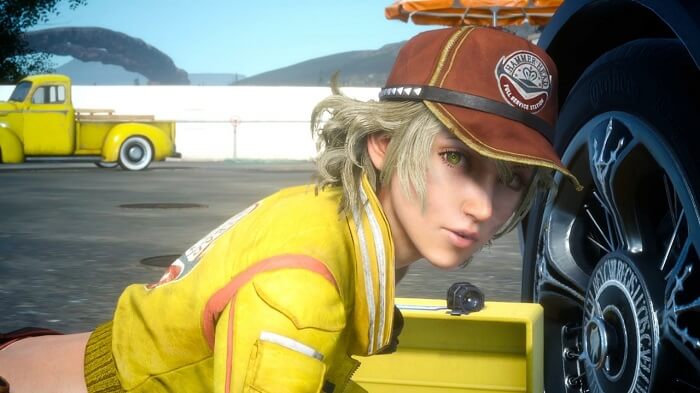 Though it’s far from a perfect game, Final Fantasy XV, even with its long and troubled development history, emerges as one of the best, if not the best, Final Fantasy title in the last 10-15 years.

BUT…and by any stretch, that’s a big “but”, the fact that you will no doubt persevere through these glaring and obvious flaws is a testament to just how well the rest of the game works. In that way, Final Fantasy XV is a truly one-of-a-kind experience. How many games could clearly and obviously ape Dark Souls, Metal Gear Solid, Xenoblade, and a host of others, muck things up regularly, advocate nostalgia for past games in the same franchise, and somehow still have you on their side at the finish? 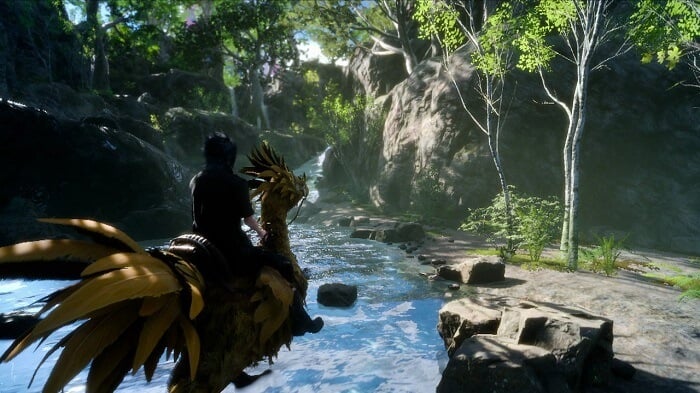 Someone, or several someones, did something very right with this game, and only for that reason does it emerge as playable and lovable in spite of its many problems. You will see this game on a lot of top 10 lists at the end of the year, and if you play it, there’s definitely going to be moments when you wonder why.

However, if you’re anything like this reviewer you will emerge with a feeling similar to how you might look at a classic trend-setting television series like Twin Peaks or Buffy the Vampire Slayer. With either drama, there are going to be moments you have to forgive or bypass in order to see the big picture, and if you can do so, you will find that underneath the flaws of each one is something transcendent and truly special.

Final Fantasy XV is just like that. It’s the American pioneer in the gold rush of the gaming world, it’s a man shaking a rusty, holey pan in a river and somehow finding something beautiful in the process.