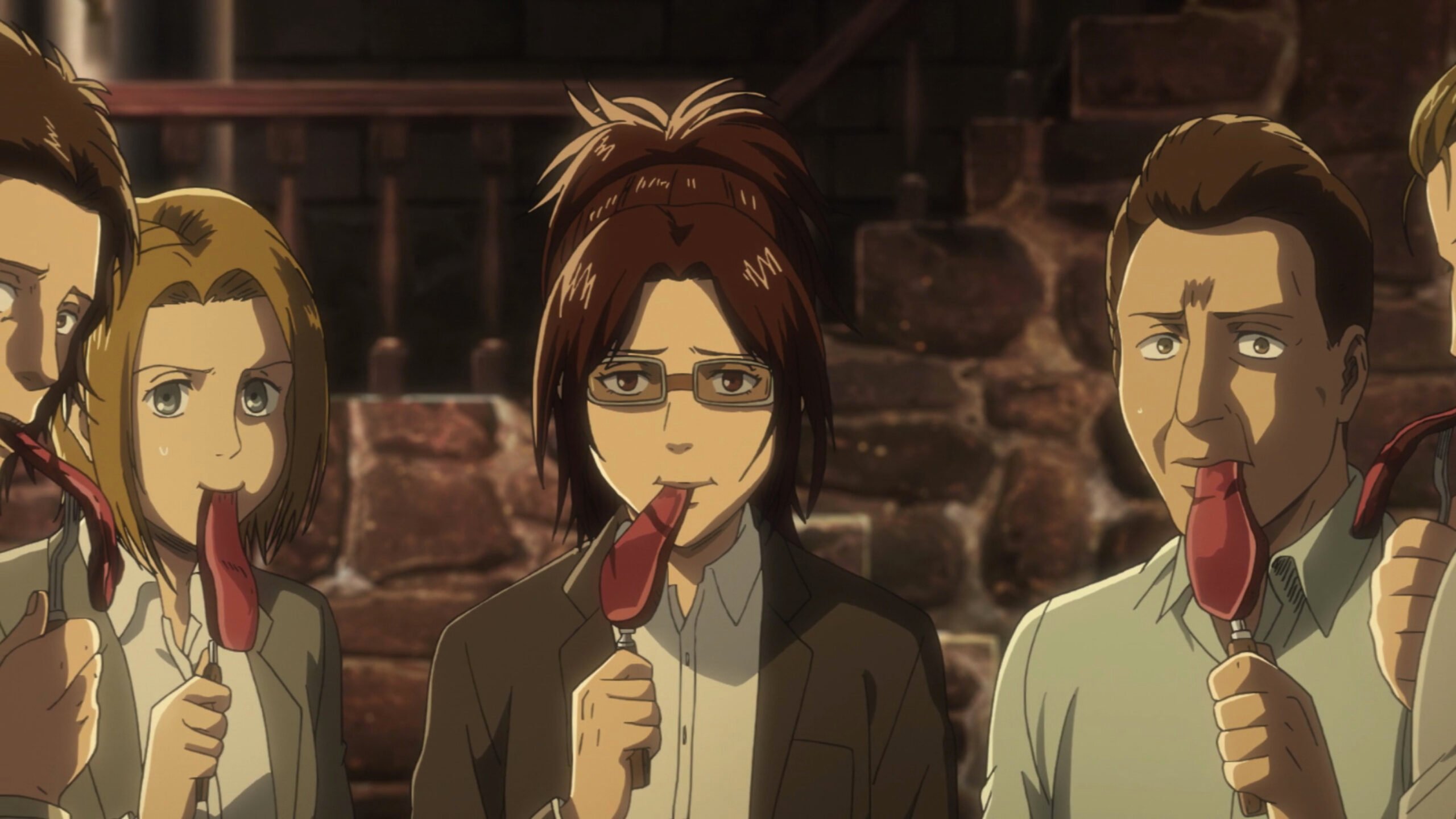 Few anime and manga series have captivated the world quite like Hajime Isayama’s Attack on Titan. A monstrous fantasy horror that mutates into a Game of Thrones-y political drama, its prevailing popularity is unsurprising. Attack on Titan’s dregs of humanity have defended themselves from people-eating Titans since 2009, and in the midst of its final season, what better time to explore the contentious subject of veganism?

Where manga and anime series The Promised Neverland irrefutably features themes of veganism in its subtext, Attack on Titan is comparatively lacking in such commentary. But in a story about humans being trapped and destined to be devoured by a superior species, interesting parallels can be drawn between the Titans and the concept of speciesism.

In 2005’s groundbreaking documentary, Earthlings, Joaquin Phoenix narrates “By analogy with racism and sexism, the term speciesism is a prejudice or attitude of bias in favor of the interests of members of one’s own species, and against those of members of other species.” The tent poles of speciesism are often voiced by Attack on Titan’s cast. Language like “We are less than livestock,” and perceiving their confinement as “We are like cattle in a cage,” implies that Attack on Titan’s characters are lacking empathy for animals they farm, despite said animals’ reality mirroring humanities’ with the Titans. A life of confinement, before death at the jaws of speciesists.

In Season 1 Episode 5 – First Battle – Battle of Trost (1), a character explains Titans’ sole purpose in life seems to be the consumption of humans. But considering they have survived for more than a century in an environment devoid of human life, we can assume they have no need to eat at all. In other words, we believe their goal in feeding isn’t to gain sustenance, but simply to kill. Whilst nutrition is doubtless bountiful in animal products, the question of necessity remains. According to the United Kingdom’s National Health Service, “With good planning and an understanding of what makes up a healthy, balanced vegan diet, you can get all the nutrients your body needs. If you do not plan your diet properly, you could miss out on essential nutrients, such as calcium, iron and vitamin B12.”

When taking nutritional needs into account, trustworthy health organizations and professionals agree that with proper planning and implementation, a vegan diet is healthy and feasible. If our consumption of animal products is based on want over need, enjoyment over survival, and taste over life, are we any different from Attack on Titan’s human consuming antagonists? Is the argument “But they eat humans, so it’s different!” not rife with speciesism?

In Season 1 Episode 13 – Primal Desires – The Battle for Trost (9), Eren remarks “From the time we are born, we are free… It doesn’t matter how strong those who would deny us that freedom are…” Eren’s belief is that by birthright, humans should be free. Do animals not deserve freedom too? Freedom to exist outside of an anthropocentric norm, and freedom of bodily autonomy. If one’s answer is “Because we like eating them,” then can that not be used to justify the actions of Titans?

In Season 2 Episode 2 – I’m Home, a flashback shows Sasha talking with her father. Their way of life includes living in a forest and hunting animals for food. When discussing that other people have moved into the forest due to losing their homes, Sasha’s father worries about the waning animal count as a consequence of the hunting spike. He says “You can feed a hell of a lot more people by clearin’ the forest and plantin’ grain. Maybe it’s time for our family to let go of the forest and give up huntin’ for good.” Whilst clearing forests is detrimental to animals and the environment — hence why many vegans endorse rewilding — Sasha’s father makes a point about the sustainability of plant agriculture over animal agriculture.

Studies say the world’s hunger crisis could be solved by repurposing animal agriculture land into plant agriculture land, due to it being more fiscally and environmentally sustainable. According to IOPscience, “Currently, 36% of the calories produced by the world’s crops are being used for animal feed, and only 12% of those feed calories ultimately contribute to the human diet (as meat and other animal products).” It later concludes, “Reducing meat consumption, or shifting meat consumption away from beef to poultry and pork has the potential to increase cropland food productivity and feed more people per hectare of cropland.”

Whilst a vegan world might be tricky to achieve, evidence points to animal agriculture being a dying industry, with plant agriculture generating more food for less space. Strangely, Sasha’s father may have Googled similar studies.

– Sasha’s father, Attack on Titan (deleted scene) (not really, that was a joke)

In Season 3 Episode 12 – Night of the Battle to Retake the Wall, the mid-episode ‘Information Available for Public Disclosure’ says “After the fall of Wall Maria, there was a dramatic decrease in food production. Livestock in particular suffered due to requiring plentiful land. As a result, meat became expensive and occasions to eat it are scarce.” This reiterates the difficult demands of animal agriculture and its sustainability struggles. What would happen if the government stopped subsidizing animal agriculture, and instead granted plant agriculture the same financial privilege?

Attack on Titan offers a canvas for interesting thought experiments on the topic of humanity’s relationship with other species. The purpose of these thought experiments is not to offend, but rather look at a divisive debate through the lens of an adored anime and manga in the hopes it contextualizes veganism to those unfamiliar. Did this odd melting pot of vegan-y Titan-y word stew get you thinking? With the energy of Eren bellowing his plight against the Titans, share your thoughts in the comment section below!