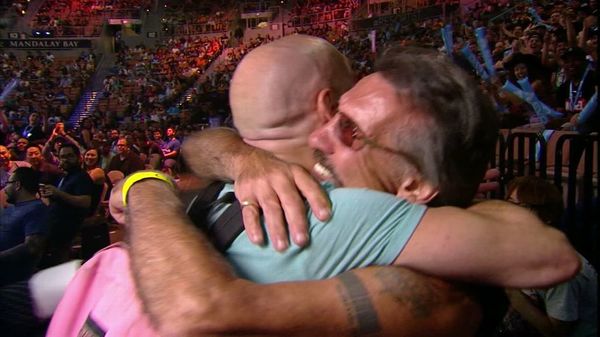 After a weekend of triumphs, comebacks, record-breaking and hype, the 2016 Evolution Championship series has come to a close. Raking in over 200,000 viewers on Twitch at its peak and even landing a television spot on ESPN2, this year’s tournament highlighted the same highs and lows that make the fighting game community so exciting. With amazing showings in Ultimate Marvel vs Capcom 3, Super Smash Bros, Street Fighter V and a slew of other top-notch titles, EVO 2016 was not only the largest fighting exhibition of all time, but one of the most entertaining. Here are some of the greatest moments from this year’s historic EVO. 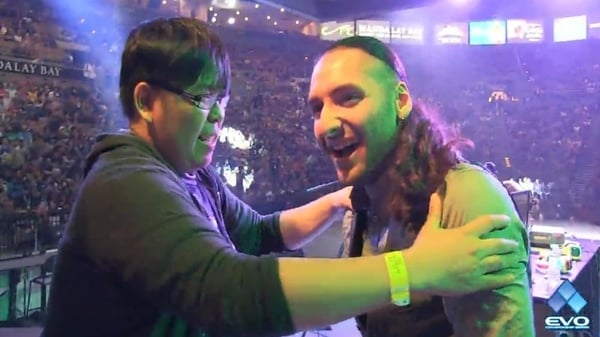 After Marvel’s licensing deal with Capcom expired at the end of 2013, many thought Ultimate Marvel vs. Capcom 3 would be all but forgotten. Instead, here we stand nearly three years later, with another insane Top 8 tournament featuring some of the greatest MvC players of all time. Despite being knocked into Losers side by NB|DualKevin’s team of Dante, Deadpool and Hawkeye in Top 16, Christopher “ChrisG” Gonzalez had one of the strongest bracket runs in EVO history. Starting off against the legendary Justin Wong, holder of a staggering 8 EVO titles (the most of any player) and 2014 UMVC3 EVO Champion, lesser players would be intimidated by such a prolific player, but ChrisG remained calm and patient during their set. Coming down to a time out on the final match, ChrisG narrowly advanced through Losers bracket, where he faced competitors the likes of Priest, Angelic and even the man who initially beat him, DualKevin. With his extremely technical team of Morrigan, Doctor Doom and Vergil, ChrisG spaced out his opponents with Doom’s Hidden Missile assist while simultaneously bombarding them with his signature Soul Fist spam from Morrigan. Eventually, he reached Grand Finals, where he played the reigning UMVC3 champion, KaneBlueRiver, and his team of big bodies: Hulk, Sentinel and Haggar. Having absolutely decimated the competition at CEO in June, KBR looked unstoppable going into EVO, but despite starting off strong in Grand Finals, he cracked under ChrisG’s pressure. To reset the bracket and win the tournament, ChrisG first had to beat KBR in a best of three. This original set was fairly close, with KBR taking the first game and narrowly losing the following three. However, by the time the final set had begun, ChrisG seemed to have his opponent in the palm of his hand. Sweeping a total of 6 games in a row, ChrisG rarely lost any of his characters during Grand Finals. At the end of the day, KBR simply couldn’t maneuver around Chris’ attacks to get a hit, and ChrisG completed his Losers run to win his first EVO title. 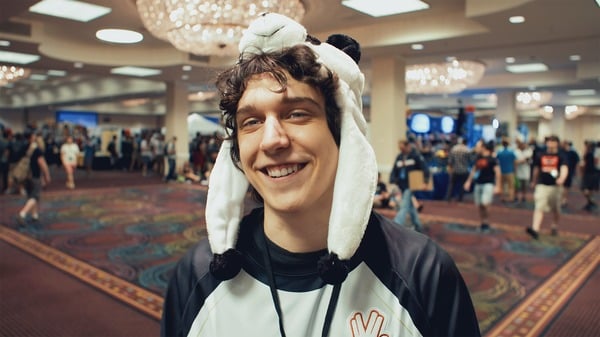 Although he is widely considered to be one of the best Super Smash Bros. Melee players in the world, few expected Justin “Plup” McGrath to get as far as he did in this year’s tournament. Undoubtedly the greatest Samus player of all time, Plup reminded the world that he is also pushing the boundaries of what Sheik can do in high level competitive play. Facing off against fellow Florida native, Juan “Hungrybox” Debiedma, in Winners Semifinals, Plup faced an uphill battle against the greatest Jigglypuff in the world. Regarded as one of the “Five Gods” of Melee (alongside Joseph “Mango” Marquez, Jason “Mew2King” Zimmerman, Kevin “PPMD” Nanney and defending EVO champ Adam “Armada” Lindgren), Hungrybox’s success was a safe bet going into the Top 8, and he was expected to face Armada in Winners Finals. However, he ran into a slight upset, Plup. With their first match taking place on Fountain of Dreams, the competitors fought tooth and nail to get a slight stock lead over each other, with Plup just barely edging out a win on his final stock after an intense fight for the ledge. Due to his impeccably placed needles and relentless rushdown game, Plup baited one of the game’s most defensive players into trading blows on stage in a match-up that is thought to be in Puff’s favor. In the following match on Battlefield, Plup used Sheik’s needles and forward-air to space Puff out yet again, eventually forcing her off stage. In a crucial moment during his recovery, Hungrybox was hit by a calculated barrage of needles, and missed an air dodge to get back on stage. Plup had done it, he had 2-0’d a Smash God and advanced to Winners Finals. Unable to adapt to Sheik quickly enough, Hungrybox failed to land a single rest on Plup, and was punishingly sent to Losers bracket. Sadly for Plup, he was decisively knocked into Losers side by the reigning champ, Armada, and had to face Hbox yet again in Losers Finals, where he lost 3-1. Although he placed 3rd, Plup had the best performance of his career, and proved that a new generation of smashers will be gunning for the title of “Gods.”

In the most emotional moment of the tournament, local legend “Long Island” Joe Ciaramelli stood as the sole American in Street Fight V’s hotly contested finals. In an insane upset during Top 16, LI Joe clutched out a win against last year’s Capcom Pro Tour champion, Kazunoko and secured his spot in the Top 8. With an extremely aggressive play style, Joe’s Nash became a force to be reckoned with, and with the venue (and most of the country) cheering him on, he began Top 8 with his father by his side. In his first match, he played the Japanese Ken player, HM Eita, who seemingly took the first set with ease by relentlessly pushing Joe into the corner and limiting his movement options. However, Joe began to play more patiently, using Nash’s V-Trigger to cross up Eita and punish his offensive strategy with overheads and grab mix ups, sweeping 3 sets in a row and advancing to the next round. Here Joe faced one of the strongest competitors in the tournament, Yukadon, a Nash main who managed to take a set off the unmatched Korean Player, Infiltration, before being knocked into Losers. Even after losing the first two games, LI Joe kept his composure and managed to run back the next 2 to take the match to an intense game 5. Unfortunately, Joe’s run ended here with a decisive 2 round victory, capped off by a great Critical Art mix-up that Yukadon charged up at the last possible second. Humble in victory and respectful in defeat, Long Island Joe got further than any American in the fighting game community and represented our country in Street Fight V’s first EVO Top 8. 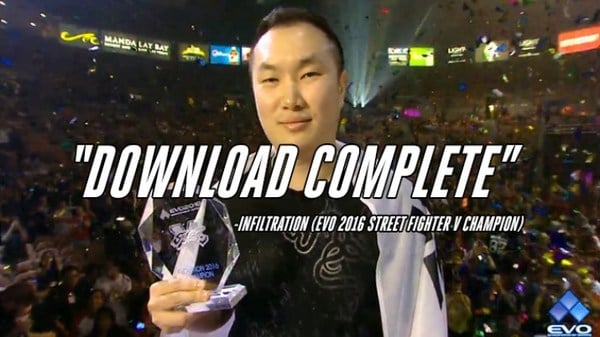 Street Fighter V’s inaugural year at EVO 2016 saw some of the most amazing games of the tournament, but in true fighting game fashion, the best matches came at the end of the final night. The Korean fighting game professional Lee Seon-woo, also known as Infiltration, has proven his status as one of the greatest players of all time, earning countless victories across numerous titles since his Street Fighter IV victory at EVO 2012. Although recent players had seemed to have caught up to his skill level in recent years, his showing in the Street Fighter V Top 8 reminded audiences why he’s such a force to be reckoned with. After making quick work of Yukadon, Infiltration hit a roadblock in the form of Japanese player, Fuudo and his main character: R. Mika. In the final round of game five, Fuudo just barely beat Infiltration out with an onslaught of command grabs and V-Triggers, sending Infiltration to Losers. In Losers Finals, Infiltration had an intense rematch with Yukadon, who had seemed to have learned Infiltration’s play style during their first match in Top 8. In this Nash mirror match, Yukadon had his opponent on match point, before Infiltration came back and brought the match to the final round of game five yet again. In an extremely close round, Infiltration looked like he was about to lose, having no meter or V-Trigger while Yukadon had both at his disposal. However, Infiltration played extremely defensively and whittled away his challenger’s health before throwing him into the corner and finishing him off with a jab. Advancing to Grand Finals, Infiltration rethought his entire approach to Fuudo’s R. Mika, and managed to reset the bracket after several clutch comebacks and perfect rounds. While it was back and forth at first, Infiltration eventually overcame Fuudo’s aggressive strategy and took the tournament 3-1. Overcoming a record breaking 5065 entrants, coming back from Losers bracket and carefully analyzing his opponents, Infiltration made one sentiment very clear in a post-win interview: “Download Complete.” 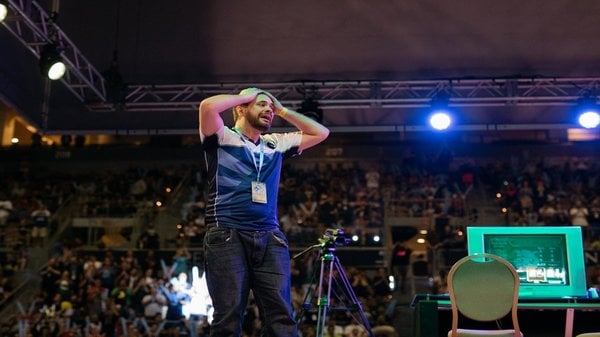 In my personal favorite moment of this year’s EVO, Hungrybox proved his haters wrong in a career defining victory. After being knocked into Losers by Plup, Hbox upped his game by going for more risky punishes and edge guards to beat out the competition. Defeating C9 Mango, considered by many to be the greatest Melee player of all time, and Plup, the Sheik who defeated him earlier in Top 8, Hungrybox advanced to the last match of the tournament against the reigning EVO champ, Armada. Over the course of the last year, Hbox and Armada have heatedly contested the number one spot in Melee, but Armada has continually asserted his dominance in tournaments, often never seeing Losers bracket. Hungrybox barely took the first two games, but in the third and fourth, Armada wiped the floor with him using Fox. On tournament point for Armada, he was up two stocks on Battlefield and had Jigglypuff offstage at high percentages before Hungrybox came back with possibly the greatest bracket reset in Melee’s history, taking Armada’s first stock and comboing him from zero to death with an insane effort. The final set had games going both ways, once again coming down to the final stock of the last game. Sending Armada offstage with an aerial attack, Hungrybox watched as Fox fell to his death, completing his long journey to an EVO win. Despite being criticized for his defensive play style and methodical approach to the game, Hungrybox has reopened the book on who the true best Melee player of all time is, and for the moment, he has truly earned the title in the grandest Melee tournament in history. While Infiltration and ChrisG’s decisive Grand Finals runs may have been more definitive over all, the sheer amount of hype surrounding this Top 8 and the fact that is was so down to the wire make it the most impressive moment of EVO 2016.

If you want to learn more about LI Joe, check out Michael Martin’s piece on him from last year, it’s a great read.

If you want to hear about Hungrybox’s long journey to the top, try ESPN’s write up.