It wouldn’t be a stretch to say that of the Big 3, Microsoft had the most riding on their E3 showing. Their presentation last year was surprisingly strong: a long-awaited Cuphead date, an exciting Sea of Thieves trailer, the premiere of Ori and the Will of the Wisps, and a laundry list of world premieres. Despite this, Microsoft has still yet to drive home why consumers should specifically invest in an Xbox One over the other platforms.

They didn’t do that this year either, but they sure as hell put on a brilliant show. Microsoft’s press conference exemplified everything I love about E3: the reveals, the crowd reactions, and the promise for plenty more exciting games in the future. With tons of surprises and plenty in the way of new announcements, there’s a lot to talk about here.

Microsoft fulfilled hopes and dreams out of the gate with a premiere trailer for Halo Infinite. The beauty of the trailer was that it left viewers questioning what game they were watching for most of the runtime. Instead, it took its time introducing us to a gorgeous, natural game world teeming with life and possibility. When the camera finally zoomed out to Master Chief’s helmet, it was reminiscent of the now-infamous Smash Switch reveal in the eye of the inkling. Despite not getting a release year or actual gameplay, just seeing the potential this new world has to offer was enough to make it a great reveal.

When From Software showed a teaser for their upcoming project at last year’s Game Awards, everyone jumped to the conclusion that it would either be a new Souls game or a sequel to Bloodborne. While Sekiro isn’t an Xbox exclusive, the fact that it’s multi-platform at all is a genuine surprise and a major win for Microsoft. The game itself looks quite aesthetically distinct from From Software’s most recent offerings, eschewing straight gothic theming for traditional Japanese setpieces and more dynamic uses of light. That said, Sekiro still looks like it’ll be full of white-knuckle boss battles and demanding combat the studio is known for.

We all knew a new Forza Horizon was coming eventually, but what’s shocking is how pretty it looks. The introduction of dynamic seasons does a surprisingly good job of changing up the visuals. Even more important, seeing players onstage playing together as the seasons changed lent Forza Horizon 4’s world a feeling of life and vibrancy previous iterations lacked. Bonus points for the ability to drive on a frozen lake.

There hasn’t been a new mainline Devil May Cry game in a decade. Love the new Dante or hate him, players have been clamoring to experience a current-gen take on the series’ visceral combat and larger than life set pieces for ages. The characters might be a bit up in the air, but the action looks as exciting as ever.

Phil Spencer’s “On my last trip to Japan” story at last year’s E3 conference resulted in one of the most-talked-about reveals of the show, Dragon Ball FighterZ. This year, Spencer came back with something a little different. Jump Force is somehow a game where three of the world’s biggest anime properties (Dragon Ball, Naruto, and One Piece) come together to fight in a huge, realistic-looking city. Bandai Namco has a solid track record of making great fighting games, but we’ll really have to wait and see how this one turns out.

Everyone paying attention to the pre-E3 leaks expected a Gears of War 5 reveal, but whether or not we’d get a trailer was up in the air. This trailer did a great job of highlighting the humans behind the armor and the potential for plenty of heartfelt, character-driven moments. The Coalition also made sure to include a glimpse of the game’s gore-filled action and genuinely horrific enemy encounters. As a lapsed Gears fan, this one definitely peaked my interest.

Damn, does CD Projekt Red know how to make a great trailer. Microsoft ended their conference with a surprise premiere of the first Cyberpunk 2077 trailer in five years, and it’s absolutely glorious. Seriously, watch this. We don’t get any gameplay, but just seeing this gaudy cyberpunk world in action looks way too good to be true. The trailer is full of jarring shots that convey the world’s blurred line between human and robotic life in the most stylish way imaginable. If there was one way to end off their conference, this was it.

Around the middle of the show, Phil Spenser came out to discuss Microsoft’s commitment to developing first-party software. In many ways, it felt like an investment in supporting their next generation of hardware (which Spenser also announced is in the works). To that end, Microsoft has opened a new studio (The Initiative) and acquired four others: Undead Labs (State of Decay 2), Playground Games (Forza Horizon), Ninja Theory (Hellblade: Senua’s Sacrifice), and Compulsion Games (We Happy Few). The biggest get here is obviously Ninja Theory, especially after seeing what they were able to do without a major publisher backing them. Bringing these studios into the fold can only be a good thing for the next Xbox’s lineup, and it was great to see Spenser spearhead a serious investment into first-party software. 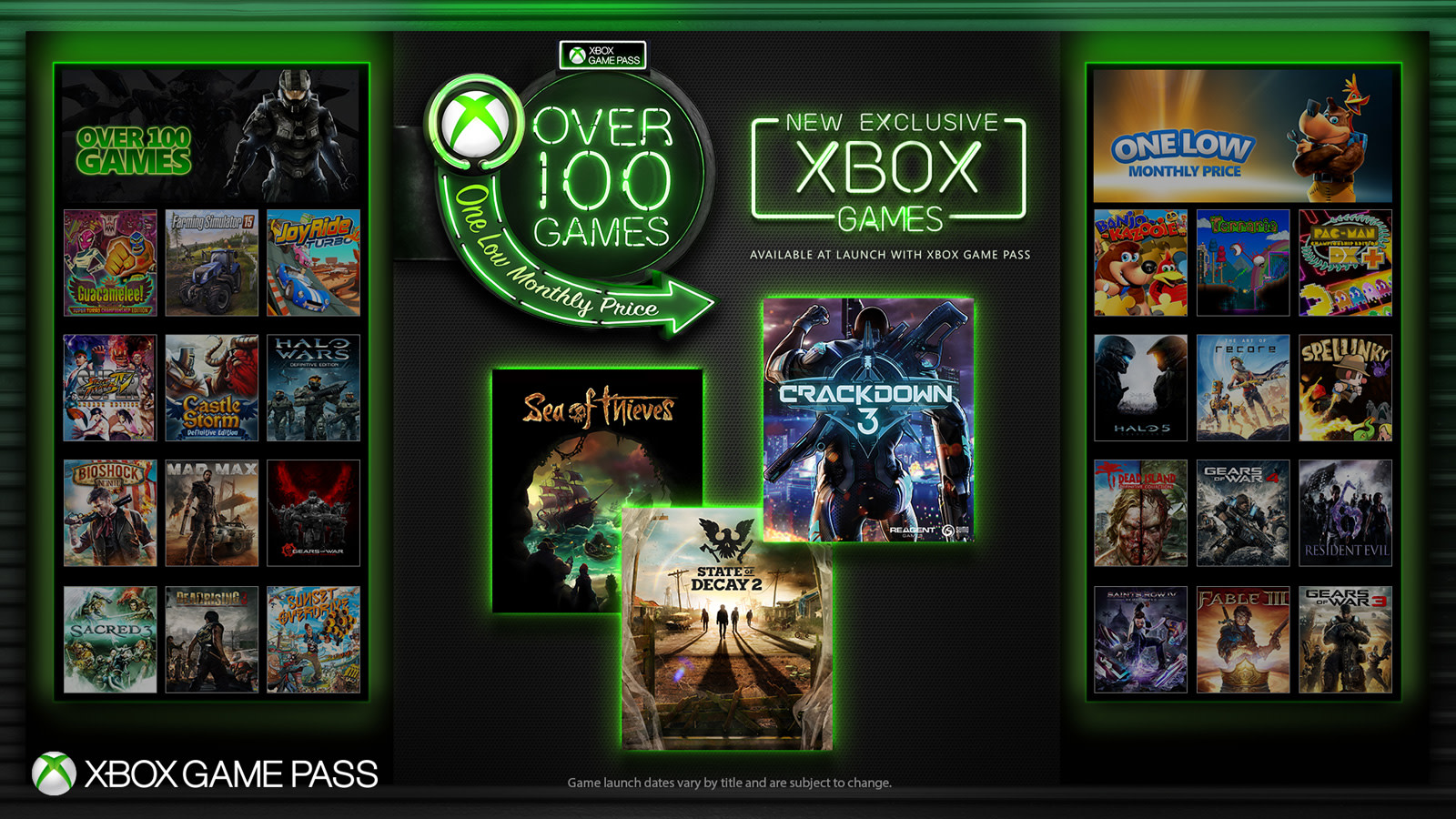 Game Pass continues to be a service that boggles the mind. The potential value for anyone who consistently players their Xbox One is ridiculous. During their E3 press conference, though, Microsoft barely made the case for why someone should subscribe to the service. Their actual Game Pass section of the conference consisted of little more than Halo: The Master Chief Collection and Fallout 4 as upcoming additions. Hopefully, the launches of Crackdown 3 and Gears of War 5 will be enough to win gamers over…whenever they get released.

Sea of Thieves desperately needs new content, and it’s great that Rare is releasing a couple of content updates this summer to flesh the game out. However, the actual reveal trailer indicated nothing about the kind of content players can expect. Will there be an actual story expansion? New quests? New environments to explore? We can only speculate, and for a game derided for how barebones it was at launch, that’s a problem.

Microsoft had the gall to make the first Gears of War trailer they showed during their E3 press conference…a mobile game. Trying to make sense of what’s going on during this reveal is a truly bewildering experience. Proceed with caution!

This is the best E3 conference Microsoft has had in years. They had some genuine surprises and showcased a diverse lineup of games coming to Xbox One this year and in the future. The pacing was also pretty solid, though there were notable lulls during a couple of Phil Spenser’s monologues and the way-too-long Division 2 gameplay segment.

Overall, though, Microsoft proved that Xbox is here to stay. They got From Software’s new game. They have some Japanese support with Kingdom Hearts 3, Tales of Vesteria Definitive Edition, and Jump Force. They’re heavily investing in first-party content with major acquisitions for the next generation of consoles. They’re supporting their existing software with content updates to Sea of Thieves this summer and Cuphead DLC next year. Are they still lacking exclusives this year? Hell yes. But the future is looking up.