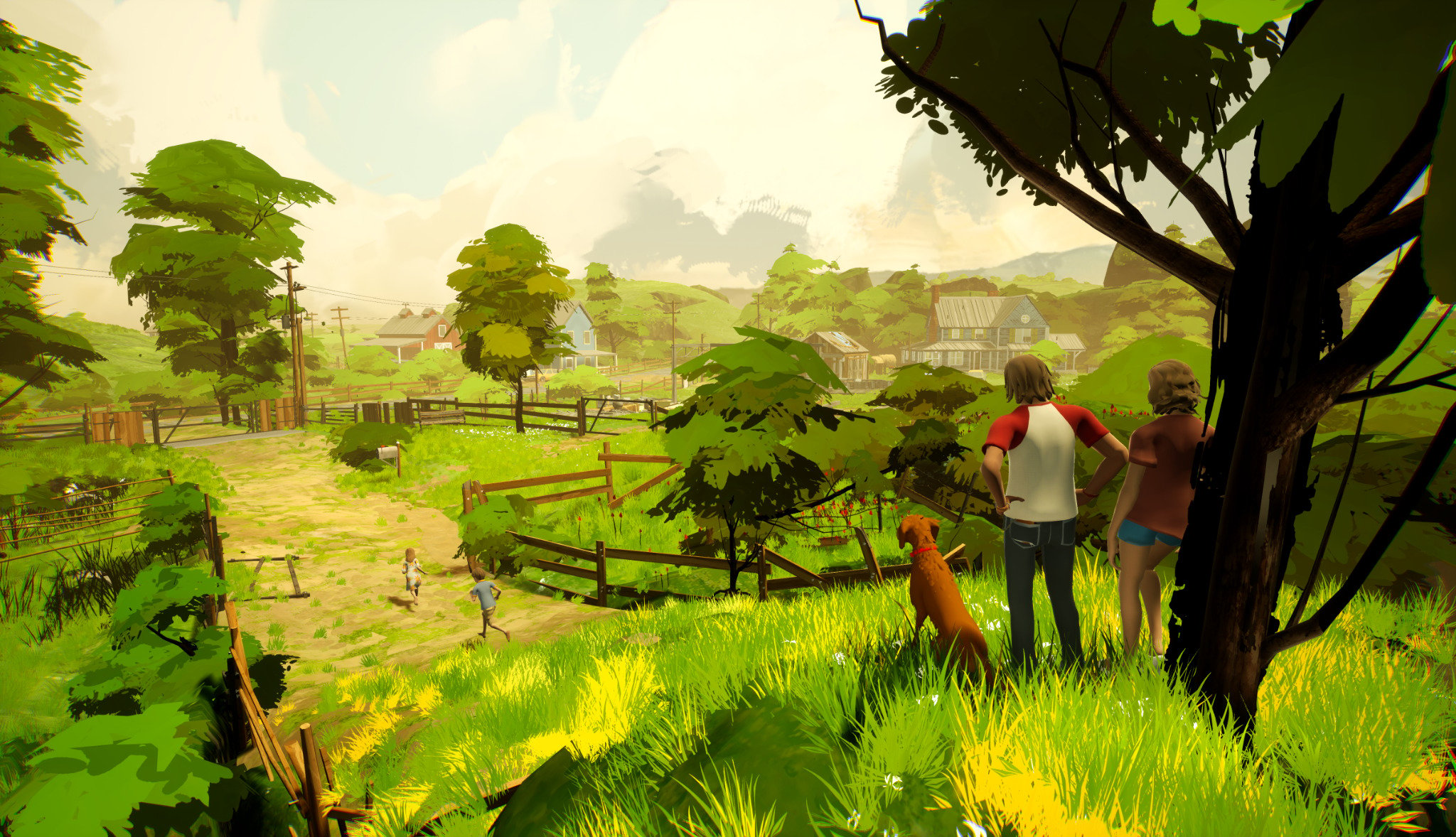 Where The Heart Leads Review

If you knew your future and the power to change your past, would you?

This is the core conceit of Where The Heart Leads, a choice-driven narrative experience from Armature studio and available only on PlayStation. The game asks a few key questions: if you could go back in time, to any point in your life, and have conversations with the most impactful people you had ever met, would you speak to them the same way? Or would you change a few things? Adjust your tone? Speak bluntly where you were formerly coy, or defer when you had originally been aggressive? Would you ask for forgiveness if you knew that an argument would lead to a falling out with a friend or family member, or would you go about things the same way?

While it might not be the most mechanically satisfying video game, Where The Heart Leads is emotionally resonant, especially for players with complicated familial relationships. A lush, densely packed look at how seemingly small choices can have lifelong ripple effects, Where The Heart Leads will almost certainly move anyone who takes the time to invest.

Where The Heart Leads is unconventional for its genre. The game begins with an exciting event. It’s a dark and stormy night, and out of nowhere, an impossibly large sinkhole has opened up on the property of Whit Anderson. Entire buildings sink out of sight, and while Whit, his wife Rene, and their children Alex and Kate are safe, their down Casey falls into the hole. Instantly, the player is confronted with a choice: do they lament that Casey has always been nothing but trouble, or do they do everything they can to rescue the family dog? What might seem like an obvious choice might have far-reaching ramifications.

Cinematic in style, Where The Heart Leads is difficult to describe, gameplay-wise. The player controls Whit in the third person, throughout several stages in his life: Whit as an earnest child, Whit as an energetic high-schooler, Whit as a nervous young adult, and beyond. Chapters progress linearly towards a fixed point, but within each chapter, the player is free to interact with other characters and their environment in any order they please. Similar to more plot-driven games like Life Is Strange or The Walking Dead, all players can do in Where The Heart Leads is talk to other characters, pick up and examine items, and make a series of binary choices. The presentation is a little more zoomed-out, in every sense of the word. Rather than being up close and personal with Whit, the camera instead offers wide views that showcase beautiful environments and lovingly rendered structures.

Whit survives his visit to the sinkhole but winds up seemingly miles below the earth. He’s stuck down there, and as he searches for a way back to the surface, Where The Heart Leads takes a surreal turn. Whit starts finding objects from his past, such as love notes and appliances, at the bottom of the sinkhole as he tries to find a way out of the cave. Soon enough, he’s having flashbacks to pivotal moments in his past, and the player can relive those moments and change them as they see fit.

There is no hidden gimmick to understand. Whit explores environments, talks to NPCs to glean information from them, and makes choices when the option comes up. There is a hazy, dreamlike presentation where only Whit is animated and other NPCs appear as glimmering outlines and a mechanic where players can construct buildings or collect piles of material by standing near things and holding a button. Other than these few simple actions, there are not really any mechanics to grapple with. Where The Heart Leads does not ask players to use their time powers to solve a murder or to jump between the past and the present to resolve any dilemmas. This is not an adventure game with puzzles and combat like The Legend of Zelda: Oracle of Ages, nor is it purely in the visual novel camp. Instead, this game quietly explores how a family, a community, and even a town grow and change over time through the actions of individuals.

Players might recognize Armature studio as the developers behind ReCore and handheld Batman beat-em-up Arkham Origins: Blackgate, but Where The Heart Leads lacks the more action-oriented elements of those other games. Instead, this game focuses solely on story. For players who spend the time to get to know everyone and grow invested in the fate of the town of Carthage, they’ll find a nuanced and heartfelt tale about life, love, and the pursuit of happiness.

Part of what makes Where The Heart Leads memorable is that the story spans an entire lifetime. Instead of simply taking Whit through his youth and young adulthood, then starting the game over and making different choices to see what changes in the story, players are in it for the long haul. By seeing and influencing how Whit’s relationship with his family and friends changes over time, Where The Heart Leads manages to make the experience of deciding between simple choices compelling. While not always as immediately impactful as the high-stakes situations of other choice-driven plots, the decisions in Where The Heart Leads often feel personal and eventually impactful. Seeing how a few simple conversations from decades prior have shaped a relationship is intriguing.

In every chapter, Whit faces new challenges. Each section of the game feels almost like a loose representation of Shakespeare’s “All the world’s a stage” speech from As You Like It. At every turn, players guide Whit through interactions with the most important figures in his life. His older brother, Sege, is an artist to the core, willing as a high schooler to sacrifice anything and everything on the altar of art, up to and including his grades and relationship with his father. Whit’s parents, Aldwin and Sofia, loom large in how he sees the world. How Whit talks to his parents will have long-lasting ramifications not just for his family but for the development of his hometown of Carthage. And of course, there’s Rene, Whit’s high school sweetheart and the eventual mother of his children, Alex and Kate. There are several other characters that Whit interacts with, and every one of them is memorable and meaningful. The backstory is expanded by finding memories and inventory items throughout every chapter, and players are well-advised to read the descriptions on each.

This game asks players to truly roleplay. By putting themselves in Whit’s head, they get a glimpse of an extremely specific point-of-view, namely that of a youth growing up in a rural American town in the 80s and 90s. The sleepy little town of Carthage is either on the cusp of revival or ruin and, depending on the choices players make regarding some land development, may impact the course of Whit’s entire life. But aside from the big, important decisions, Where The Heart Leads lets players make smaller, more day-to-day choices as well. Simply spending time and spinning out a conversation with a neighbor’s father feels rewarding, in part because the writing generally feels real and relatable. This carries through the entire game, with Where The Heart Leads going to some unexpected places in its themes. Far more than a family drama, Whit will also witness the ravages of unfettered capitalism and grapple with familial responsibility in the face of creating great art. Anyone who plays this game and has pursued an artistic career or lived in a town that went through an economic decline will find dialogue that rings true. From great American delusions like the importance of pulling oneself up by their bootstraps to the heartbreak that accompanies taking care of an ailing parent, Where The Heart Leads explores unexpected material.

And yes, the Butterfly Effect is mentioned. How Whit and his brother Sege talk to their father Aldwin in early chapters becomes a central point of Where The Heart Leads and has a cascading effect on the lives of both siblings over the years. The story is surprisingly lengthy, and while the last few chapters are not as fleshed out as the first few, the combination of generational trauma and societal upheaval is compelling. This is a game that asks to be revisited again and again. Even a cursory glance at the trophy list confirms that there are plenty of outcomes to be enjoyed and pored over.

While Whit’s brother Sege may fit all the stereotypes of a classic screwup, he often speaks wisely, beyond his years. As Whit goes through all of life’s many stages, it is easy for the player to feel overwhelmed by the weight of the choices pressing on them. But Sege offers some meta-commentary about life as a whole that also happens to apply to Where The Heart Leads and video game narratives as a whole: “Stories are like dreams, only permanent. You never forget them, because you can always go back ad read them again. And they do the same things dreams do… they tell you about the world you live in.”

Where The Heart Leads is ultimately a slice-of-life story that comments on the paradoxes of parenthood and the illusion of choice. It is a startlingly heartfelt experience, from a studio mostly known for its work porting other titles to various systems. It is honest, in the way that dreams are honest. Where The Heart Leads understands that everyone, from the local bartender to ambitious town alderman, has little stories crammed into the nooks and crannies of their lives. Just before the credits roll, the player is treated to a little summary of Whit’s relationship to nearly every character in the game, both major and minor, based on choices made throughout their time. It feels a little like A Christmas Carol, in a good way.

We rarely are fortunate enough to step back from our own lives and see what choices led to which outcomes. Where The Heart Leads lets people experience this, to a degree. While real-life rarely offers direct lines from one event to the next, this game will make players think more closely about their own experiences. Self-reflection is hugely important, and Where The Heart Leads makes that action into the main event.