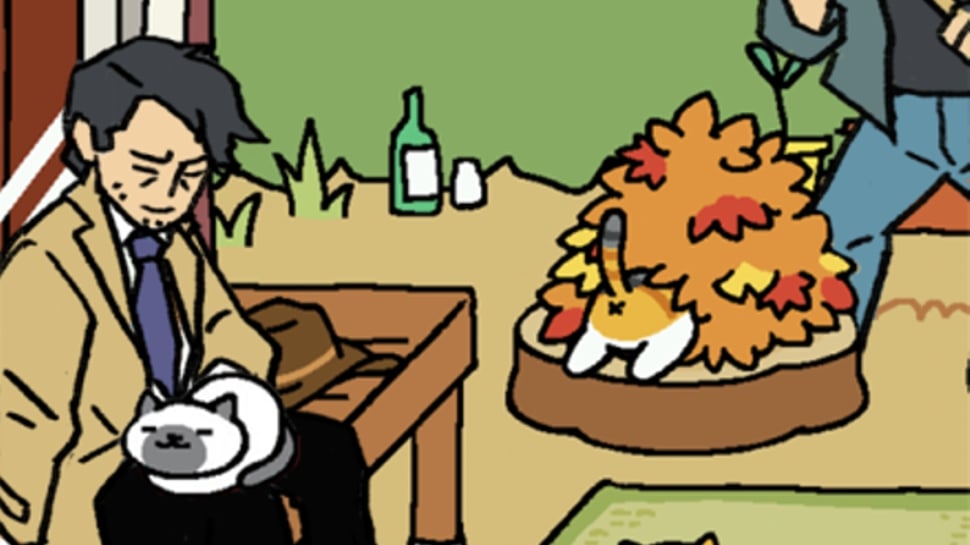 I open my eyes to the brute fact of morning. My smartphone vibrates next to me. Time to leave for work.

But first I have to shower; get dressed; make sure my satchel has everything I need; contemplate why satchels are called “murses” in North America, where for some reason they’re hotly debated; leave my apartment and walk to the nearest bus stop; stare in disbelief as two or three buses avoid me altogether, too full to take anyone else on; eventually board a somewhat less populated bus and get intimate with its many passengers; and pray I don’t sweat too much before reaching the office.

Which is why, as my smartphone vibrates and I envision the hour ahead, I need a distraction. I need cats, lots of them. Not actual cats, mind you, because I’m barely ever home for real pets. But virtual cats? Those I can deal with.

So I open my Neko Atsume app.

This game is so simple and disarmingly cute that it became a cult sensation among English-speakers despite being entirely in Japanese. A translation was finally made available last November, concluding an incredibly successful year for Neko Atsume.

But I had never heard of it until a few weeks ago. That’s when I saw a friend of mine on Facebook share a screen capture of his digital backyard populated by adorable cats. It looked like my version of heaven. Downloading it was easy and, most importantly, free. 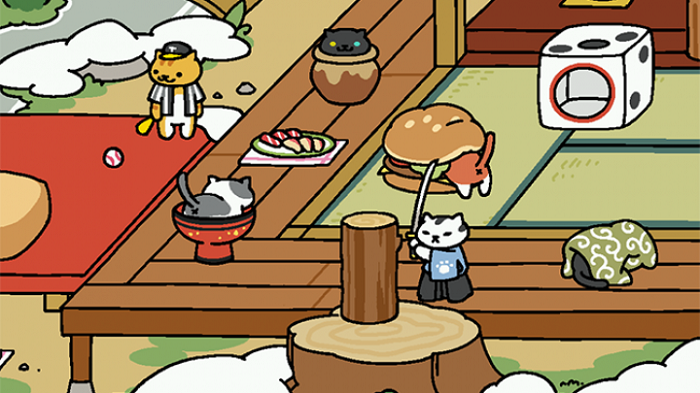 The player’s view is confined to a narrow patio. A stone slab rests on the south-east corner, a tree stump to the north, shrubs and plant pots beyond it, houses and powerline poles in the distant background. To the west, a raised porch, sustained on short stilts. A green carpet stretches down the middle and an empty pink bowl completes the composition to the south.

At the edges of the frame, you glimpse your house and the neighborhood around it, but they remain tantalizingly out of view. The scene resembles one of those “pillow shots” of tranquil and quotidian Japanese scenery so beloved by film director Yasujiro Ozu. That is, until the cats start pouring in.

First you have to put food in the bowl. Thrifty Bitz are free. Frisky Bitz are better and still cheap. The remaining gourmet options are expensive, but worthwhile in small doses. Then you have to purchase a few toys and goodies, maybe a cardboard box, a ball of yarn, or a scratching post. You place them around the yard, then close the app and wait a few hours.

When you come back, they’ll be there, the cats with curious names. Snowball and Tabitha and Mack and Marshmallow and dozens more. Some are playful, others are adventurous, laid back, or have fine tastes. Some are white, others have brown or black spots, or white stripes, or grey-black fur and hypnotic yellow eyes. All welcome your hospitality and tip you varying amounts of silver or gold fishes, which are your virtual currency. You can pay real-world money to speed up your acquisition of aquatic coin, but patience is usually investment enough.

Eventually, you’ll be able to buy some mouth-watering wares. There’s a “quaint bistro cut from a cardboard box,” a “decadent tiramisu-themed hammock cube,” a “luxurious hammock made of superbly elastic cloth,” a full-blown cat metropolis with platforms and scratching posts, a “handcrafted traditional fireplace from bygone days before central heat,” a “classic goldfish bowl,” and a yard expansion so you can break through the boundaries of the limited frame. That last purchase, alas, requires some serious dough.

What’s the appeal of Neko Atsume? 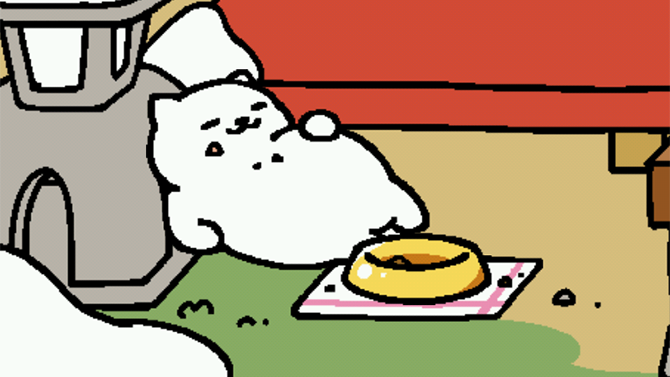 Does it tap into our profound desire for customization and home improvement? If you keep playing, you’ll eventually earn access to chic items like the Art Deco Cat Tree, described in-game as a piece of modern art worthy of Frank Lloyd Wright. It would probably cost hundreds at a pretentiously hip furniture store, but in Neko Atsume’s cuddly version of Japan, it’s there for the taking.

Yet you don’t personally do anything with these toys. You mostly hope to impress a varied roster of cats. And where do they come from, these cats? Are they homeless? Have they temporarily abandoned their owners? At any rate, they’re not yours to keep. You don’t own these cats and you can’t play with them. They bless you with their presence, for a time. You can watch them and snap pictures, then they’re on their way.

If there’s something I respect about cats it’s that – in real life and in Neko Atsume – they usually do their own thing.

I used to have cats. Two of them, when I was a kid. A mother and a son. I never played with either because I knew they wouldn’t cooperate. They were always involved in mysterious private machinations. Sometimes they would leave the house for days and then come back as if nothing had happened.

Once, before I was born, the mother returned from one of her typical excursions, except followed by two raving dogs in a high-speed chase – the cat version of being hunted by police in Grand Theft Auto. My parents thought she was in danger, but no. She was in fact trolling the dogs. She’d give them chase, turn around, claw them to kingdom come, continue running, and then repeat the trick. She kept doing that and the dogs kept hoping to have better luck next time, like predictable video game bosses with repetitive moves. Eventually they gave up and left whimpering and bleeding. She remained unscathed.

Such heroic antics gave her a legendary aura in my mind. I loved her, though we didn’t do much together. I just liked that she was there, sleeping on the sofa when she wasn’t in Street Fighter mode. Occasionally she’d allow me to caress her. She’d narrow her eyes, flatten her ears, and nudge her head forward – my cue to interact with her. I could only feel grateful. 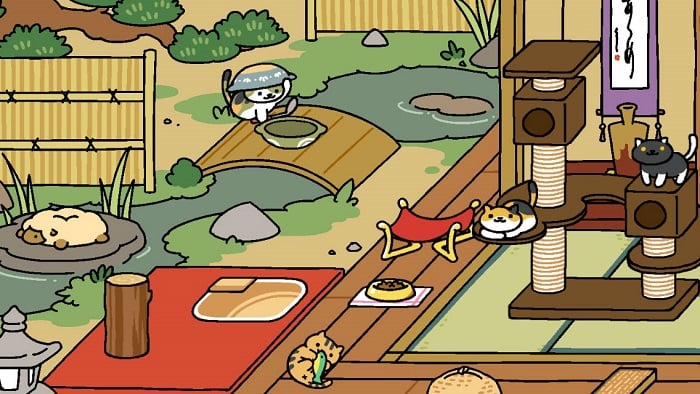 And that’s what Neko Atsume simulates so cleverly. You don’t own your cats or tell them what to do. You merely scatter goodies around your yard and pray they come. If you provide an enticing environment, you’ll attract the really demanding and high-tipping felines. And then you’ll only be able to feel grateful.

Is the point of Neko Atsume, then, to make us feel good about ourselves? To have our worth validated by virtual kitties? Of course it is!

Now, that sounds over-dramatic. But the draw of the game is having your temporary pets confirm your hosting prowess. You might not play with your toys, but they’re still yours and you can watch dozens of kitties having the purring time of their lives with them. As for said kitties, you don’t really collect their digital bodies, only preserve their likenesses in a photo album. They chill in your patio and you can tweet the evidence. Seriously.

A couple of months ago I read an article about video game homes and how they provide respite from cruel science-fiction universes and the like. For instance, right in the middle of the Fallout wasteland, you can build and decorate your little crib! I’d like to do the same in real life but, you know, it costs money. And as much as I’d like to pretend I have bundles of cash locked away in a bank, I don’t because I’m young and underpaid. But at least I have my Japanese getaway in Neko Atsume! So that’s good.

And anyways, I don’t really spend that much time in my apartment. So what Neko Atsume gives me is a portable surrogate home to carry around, into which I can escape from the – neither dystopian nor stress-free – big city traffic land.

You see, as it turns out, those cats are not the only ones looking for a place to lie down and cuddle with rubber balls. That’s me on a daily basis. And it might be you, and you, and you!

And millions more, judging by the number of downloads.