The horror genre is a fickle one; most titles end up being very hit-or-miss, regardless of their sub-genre. Either a game nails the terrifying atmosphere and succeeds in creating tension for the player, or it fails to elicit any sort of fearful emotional response. There have been few games that created a sense of fear and dread from imagery and atmosphere alone, as it requires a deep sense of immersion, and fortunately, Detention is one of those rare experiences that owns its place in the horror pantheon.

Detention blends themes of government oppression and the spiritual, and throws them into a 1960’s Taiwanese high school. Throughout the game, it’s never truly apparent what is real and what is simply a figment of the main character’s imagination, as the game expertly places the player in a suspension of disbelief. The main character is trapped inside the high school due to a seemingly supernatural typhoon, and once she realizes she’s trapped, things start to go awry. The player’s job is to figure out exactly how to escape the school, all while revealing more and more about the character’s past and the world around her. The environment itself is simply breathtaking. The entire game is hand-drawn masterfully, with each section of the school looking completely unique. The stormy weather of the outside areas blend nicely with the dark, foreboding corridors inside the school. Detention’s latter half is filled with surreal imagery that succeeds in being terrifyingly gruesome. The atmosphere created by these disturbing visuals makes Detention far creepier than the myriad of other horror titles that rely on cheap jump scares. While there are only a few enemy types, encountering one of them is a haunting experience that benefits from their rarity. 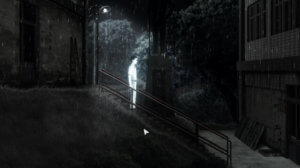 Left-clicking controls all of the movement in Detention.

There really isn’t too much to discuss when it comes to Detention’s gameplay. As a side-scrolling point-and-click adventure game, there certainly isn’t much room for complex control schemes and demanding inputs. Detention is best thought of as an experience rather than a traditional game, as it’s designed to be completed by every player. Puzzles persist through most of the game’s three hour run time, however none of them are challenging enough to warrant serious thought. That said, a few of them are clever, and provide a nice ‘ah-ha’ moment when solved, which is nice to see in a modern horror title.

Combat is non-existent in Detention, as there are no weapons or self-defense methods to speak of. The only thing the player can do to avoid death is to run away and hold their breath. That’s not a figure of speech either: pressing the right mouse button allows the character to hold their breath, causing them to be invisible to the haunts that roam the school. It’s a neat mechanic that certainly builds tension during many of the encounters, especially with one enemy that won’t be spoiled here. This mechanic also reinforces the idea that the player is completely helpless, which adds to the horrific atmosphere.

The lack of any intense gameplay or challenge is certainly not a negative thing, it’s simply how the game is designed. Detention strives to keep the player immersed in its environment, no matter the cost. Dying doesn’t even halt the game; the main character simply wakes up on a mountain trail and continues their adventure. Titles like this must rely solely on the experience they deliver rather than whether they’re ‘fun.’ Detention expertly accomplishes Red Candle Games’ goal of telling a compelling story all while keeping the player frightened from start to finish. 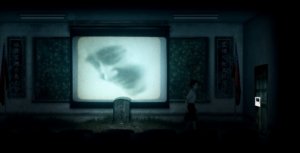 While the experience is certainly fantastic, there isn’t much to keep players coming back. An alternate ending warrants another play-through, but even that doesn’t add much replay-ability due to the game’s short run time. Most players will finish the game in around three hours, with a fourth tacked on for getting the second ending. Luckily, the $11.99 price tag fits this limited experience well, and anything less than that would be a steal: The chilling experience Detention provides is worth the price. The narrative never gets in the way of the horror; players never have to worry about being taken out of the experience due to unwanted cutscenes or copious amounts of dialogue. It’s certainly there, but it’s expertly paced and provides just enough detail to keep gamers mystified and intrigued. Not many horror titles can strike the perfect balance between storytelling and scares, yet Detention manages to do so. It’s a shame the experience is so brief, as gamers will likely be pining for more once the credits roll.