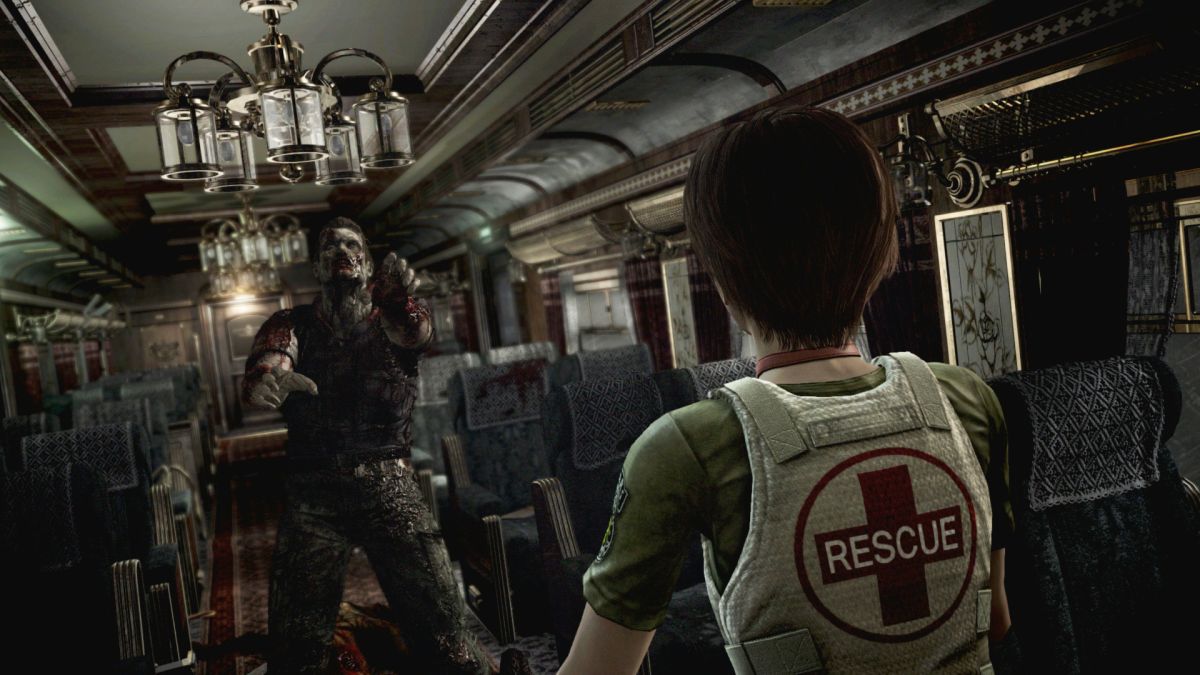 We need to talk about the design of Resident Evil 0..

Released as a Gamecube exclusive, Resident Evil 0 isn’t exactly the game with the clearest, or most memorable, place in the Resident Evil canon. It mostly seems to exist for two reasons: the first being that Resident Evil (AKA the REmake) had done very well for Capcom, both financially and critically, and they were obviously looking to capitalize on that success.

The second, and the much sillier reason appears to be some odd, and very ill-advised, notion that the Resident Evil mythology needs to somehow make sense or be explained better, the idea of which is frankly laughable.

Still, in that regard, we have very goofy scenes in this game where Albert Wesker and William Birkin appear literally just to say lines like “I’m going to go summon the S.T.A.R.S. team.” “Right, while you’re doing that, I’m going to activate the self-destruction sequence.” No, I’m not exaggerating, those are literally two lines of dialog that follow one another.

This ties into a very problematic idea from this time period (the early to mid-’00s, specifically) that to go back and explain things we were already familiar with, in order to add context and understanding to the story as we knew it, would somehow enrich the whole experience for us. However, as experience has shown (Star Wars: Ep. I-III, Rob Zombie’s Halloween remake, Hannibal Rising) tales like this generally fail to be interesting at best, and cheapen the entire mythology they’ve attached themselves to at worst.

Resident Evil 0 is no exception to this pattern, as, like many prequels before it, in the very act of telling this story, it opens up as many new questions as it answers old ones. For example, why does Rebecca not seem to know what is going on when Chris meets her in the first Resident Evil? We watch her take down a god damn Tyrant in this game, among other things, before going off to the mansion that is the main setting of RE, so why is she oblivious to the events she’s supposedly just gone through?

I mean, really, we could talk about the overall silliness of the plot all day, from Billy Coen (the ex-soldier with a heart of gold, as our film editor Patrick Murphy hilariously called the character, when I spoke to him about the game a while back), to the opera singing bad guy who throws leeches at people, to the really out of place war crime back story of the aforementioned Mr. Billy Coen, to… well, you get the idea.

But come on, this is Resident Evil, and we all know that no one is here for the thrilling tale of an evil pharmaceutical company, gone mad with power, and prone to creating one undead catastrophe after another, all in the name of… uhh, capitalism, or something. No, Resident Evil has always been and still is, ultimately a series about getting spooked every so often while enjoying the visceral thrill of battling increasingly ridiculous hordes of the undead.

So how does Resident Evil 0 fair in that department? Well… ummm, they certainly get the… uhhh “ridiculous” part of that equation down. I mean, look, let’s not pretend that the fictional T-virus and G-virus, that so much of this mythology depends on, ever really made any real, logical sense (why are some creatures turned into monsters by contact with the virus, while others seem to grow 10 times their size, for example), but we’re even scraping the bottom of the infected animal barrel in this game.

Monkeys, of all things, are used as the new enemy you’ll encounter throughout the game. And, well, they’re just angry monkeys with claws. So that’s pretty stupid. And then we have the overgrown animal-monster trope we’ve seen in every RE game up until this point. In the past that’s given us frightening creatures like the giant shark, the giant spider, or the giant moth. Here, we just have weird rip-offs of those ideas with a giant scorpion, a giant bat, and… a giant centipede? C’mon RE0, you’re just embarrassing yourself at this point.

Still, even these flaws are nothing compared to the overarching problems that threaten to derail the game as a whole. To be frank, Resident Evil 0 even manages to break things that were fine in the original game, a game that preceded it by over 6 years. You see, rather than having a place to store items, a la every game in the series that came before it, RE0 manages to craft a totally useless square wheel by forcing you to drop items every time you run out of inventory space.

What does that mean in a practical sense? Well, it means that if you need to pick up a key item, then you’re going to have to leave behind either a healing item, some ammo, or a gun in exchange. Now, with these fantastic improvements, instead of being able to organize your inventory, and access items you’ve amassed, from any save room, you have to backtrack all the way to wherever you left them.

I have to imagine the discussion that led to the implementation of this new mechanic went something like this:

Capcom Exec 1: “Hey Bill, I’ve got this great idea to introduce a new inventory system. It’s gonna change everything!”
Capcom Exec 2: *looks over proposal* “Err, well Jim, this looks like it’ll make the game twice as long.”
Capcom Exec 1: “And half as fun!”
*Both high five*

I mean talk about fixing a broken gas pump with a blowtorch, what the hell were they thinking with this shit? You’d think the problem might be mitigated somewhat by the fact that, between your two protagonists, you have 12 inventory spaces instead of the normal 6, 8, or 10 of other entries, but they even managed to fuck that up.

You see, since characters can find themselves cut off from each other, incapacitated, or even removed from the game for up to an hour, you might find that the weapon or ammunition you so desperately desire is with a character who is currently hanging on to a cliff for a remarkable amount of time, or a character who has been washed away by sewer water for the last quarter of the game.

Further compounding these issues, the design team decided to go back to a rule that hadn’t been used since the original game, in which any gun that’s not a pistol takes up 2 of your character’s six item slots. And, I mean… I need to wrap this up before I have a god damn aneurysm, but as William Hurt said in A History of Violence: “How do you fuck that up!?”

With all of that in mind, should you play or (God help us all) replay Resident Evil 0 all of these years later? Well, not if you want to hold onto whatever fleeting positive memories you might have of the game.

I mean, don’t get me wrong, like with the REmake, that HD upgrade does wonders for RE0‘s visuals, but after the shock and awe of modern technology wears off, all you’re left with is a game that was sandwiched between two very good games in the Resident Evil timeline, in the REmake and Resident Evil 4, and looks all the worse when compared to them in any way, shape or form.

So, uhh, I mean, have fun. If that’s your thing. For the rest of you though, this game is better off left 15 years in the rearview mirror where it belongs.