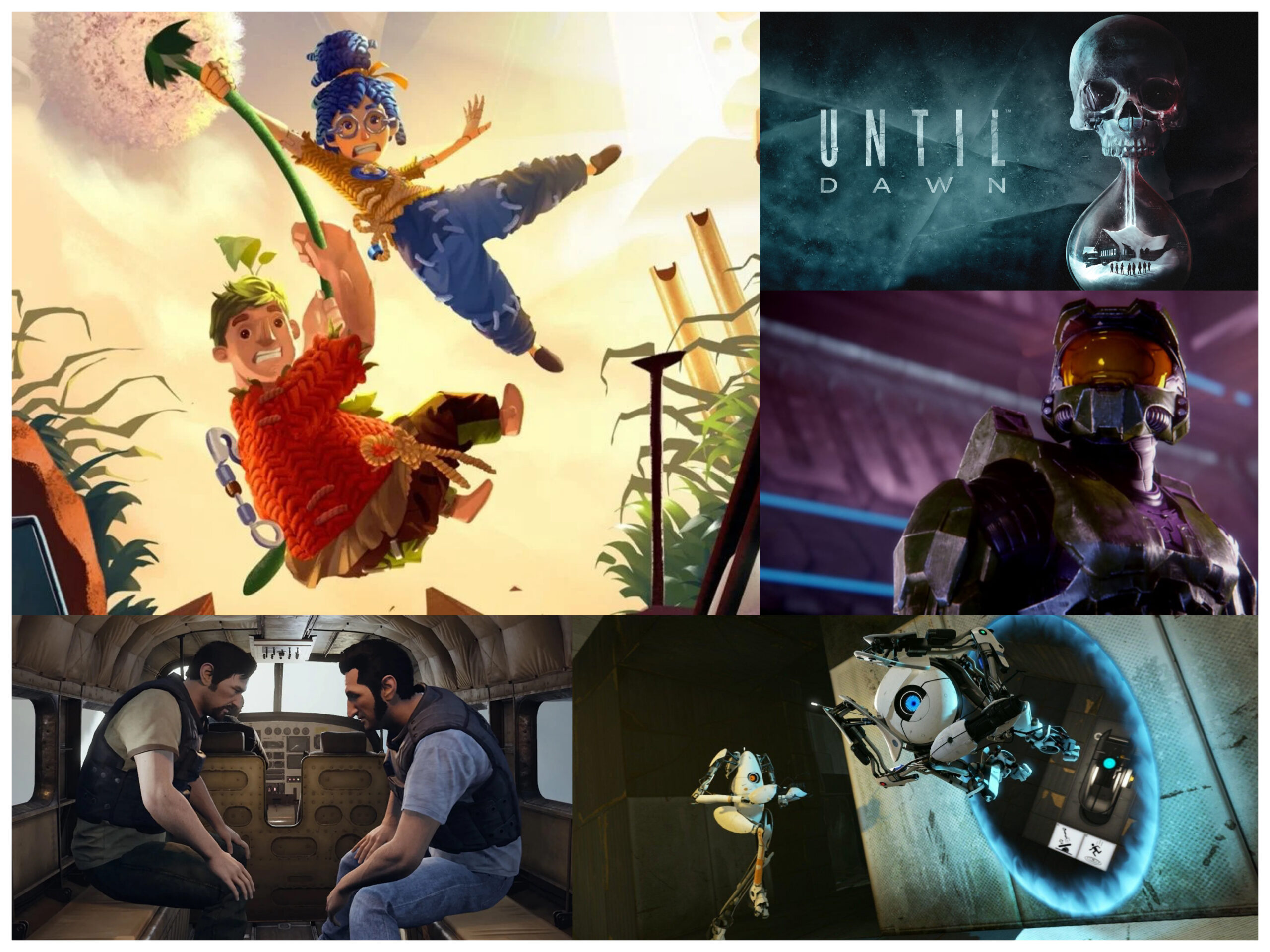 Another year has passed and once again an utter lack of preparation has left people everywhere without plans for what is supposed to be the most romantic night of the year. If you’re one of those procrastinators who should never be in charge of planning again, a great option to avoid a disappointed partner is an intentional night in. So go pick up some Chinese takeaway, buy some fresh batteries, and get that ethernet cable out to download some updates! Here are four Xbox games and one PS4 game that feel so intentionally made for two that your partner will never be able to tell that you totally forgot to make that dinner reservation.

Since day one, cooperative gameplay has been at the core of the Halo experience. Not only is Halo one of the most approachable franchises for newcomers in the history of video games, but the collection packs in six top-tier campaigns for you and your special someone to continue to bond over long past valentines day. Each campaign is short enough that depending on your level of enjoyment and dedication, you and your partner are likely to get through either a significant portion of or an entire campaign. A wide variety of difficulties can create as simple and power-tripping or difficult ax-grinding experience as you desire. With a total of 66 levels that can be mixed and matched in playlists to the heart’s content, The Master Chief Collection is a great choice for the special night even if you already play Halo together regularly. Top shelf gameplay, unprecedented replayability, and enough difficulty options to make a challenge for any couple will surely create enough of a bond to prime the pump for activities that will come later in the evening.

Where Halo will undoubtedly build a strong bond between two partners, Portal 2 just might break it. Definitely not for the faint of heart, Portal 2’s cooperative mode will truly test the metal of any relationship. Valve’s puzzles in the single-player campaign get to the point at which they are extremely difficult towards the end of the game. As if to make those puzzles even more difficult the cooperative mode adds another player with two more portals. While thinking with portals is something that can be difficult but eventually learned, thinking with four is a challenge in which two brains are undoubtedly better than one. Portal 2’s cooperative mode cranks up the difficulty, which admittedly isn’t particularly conducive to a relaxing night in, but the sense of accomplishment and cohesion achieved between two people when completing those puzzles is second to none. If you are looking for that final push to confirm that that special someone is going to be your forever valentine, there’s no better game to test your teamwork than Portal 2.

For those who are more into experiencing great thriller movies or series with their significant other, A Way Out is sure to be a crowd-pleaser. You and your valentine will take on the roles of Vincent and Leo, two convicts serving their sentences in prison. From the point of conception, A Way Out was designed to be a cooperative experience, and throughout Vincent and Leo’s journey of escaping prison and being on the lam, you’ll be forced to work together. While the game doesn’t present anything nearly as challenging as that which is found in Portal 2, what it does bring to the table is a fun and thrilling story that simultaneously brings the players together as the characters grow and drive a wedge between the two by endearing both Vincent and Leo to their respective players. If players are diligent in their occupying the same character throughout the entire playthrough they’ll be treated to a twist ending that is an experience entirely unique to the medium of video games. A Way Out might not be the best game on this list but it does offer the biggest gut punch to be had.

In a huge surprise to no one, It Takes Two is the second game from Josef Fares to make this list. After working towards bigger, more ambitious, and even more cohesive experiences for years, Fares was finally able to nab the game of the year award from several different organizations, and with good reason. It Takes Two features some of the most innovative and imaginative level design, mechanics, and puzzles in recent years. At the center of the experience is a suite of context-specific actionable mechanics that have been split in two. Giving each player half of the mechanical ability needed to progress forces them to not only think of themselves and their own capabilities but also of what their partner can do and more importantly what they can do for their partner. The game does something similar with level design as well, by splitting the players up and pushing them down their own respective paths but keeping them close enough to one another to be able to interact with the environments surrounding each other, Fares and his team were able to necessitate each player looking at their partner’s screen, literally providing a different perspective on the same situation. Not only is It Takes Two one of the best action platformers of the last decade, but it is a game that both implicitly and explicitly teaches the fundamental building blocks to a successful relationship.

It Takes Two is one of, if not THE, most impactful and finely tuned cooperative experience in video games. But sometimes that level of excellence in design pales in comparison to a simple and stupid horror genre piece, and Until Dawn is the best one since Scream. Until Dawn perfectly emulates the experience of watching a completely enthralling A-tier movie masquerading as a B-tier schlockfest. Supermassive Games finally gave audiences the freedom of choice in a horror movie and in doing so proved that we are all just as dumb as those characters. Until Dawn is a perfect game for a couple comprised of one gamer and one nongamer. The crux of the “gameplay” being decision-making makes the game just as immersive, interactive, and engaging for the backseat gamer as it is for the person in control. Until Dawn is a campy six-hour horror movie that can be excellent fun for a couple who typically doesn’t game together.

Whether you’re both experienced gamer’s looking for the confidence to take the next step towards building a life together or new lovers looking for a simple story to experience and bond over, video games can be the ties that bind. But those experiences that can build relationships aren’t limited to this list of games, cooperative games have made some of the best memories I have with friends, family, and my wife, despite her insistence that Crash Bandicoot 4 is a cooperative game. So regardless of who you love, if gaming is a part of your life make sure to share that with them this valentines day.