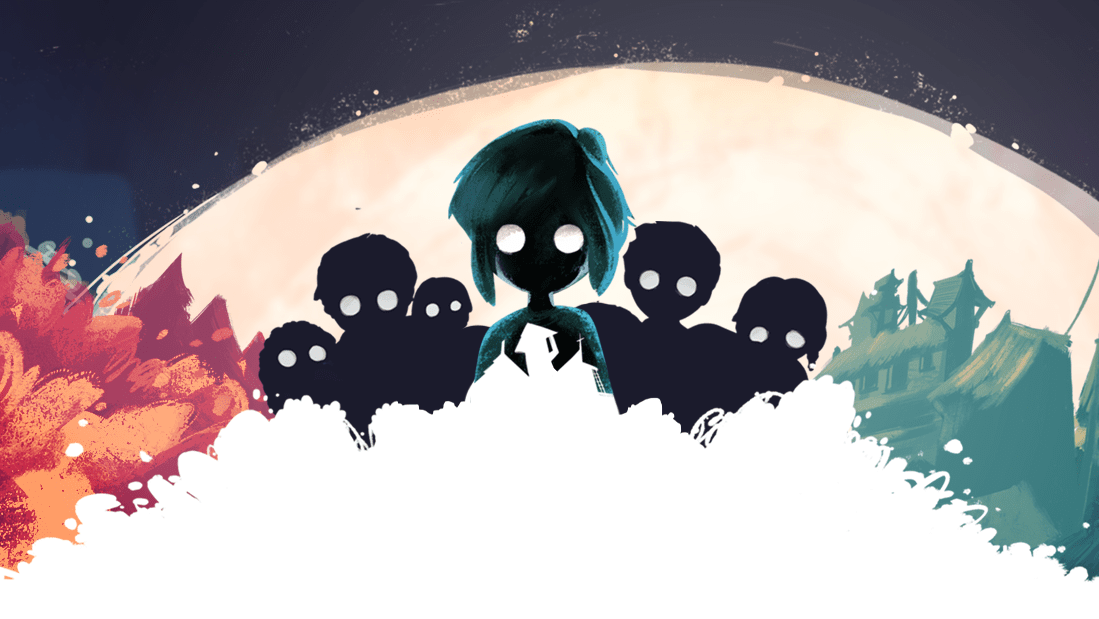 Children of Silentown is a point-and-click adventure that, for both good and bad, wouldn’t feel out of place in the catalog of Amanita Design, developers of Machinarum and Botanicula. It strikes a similar mix of striking art, unique music, and classic adventure game mechanics with just a hint of innovation. Yet Children of Silentown appears a distinctively less inspired game than those mentioned above, with no strong theme or thesis to bring the whole experience together.

The namesake of the game is Silentown, an isolated collection of houses surrounded by a mysterious forest. Everyone in town obeys a set of nebulous rules. Those who disobey are taken away by monsters, never to be seen again. The story really kicks in when Lucy, a young girl and the protagonist of this story, decides to investigate those disappearances. Helping her in this investigation are her singing skills: on top of traditional pointing-and-clicking, players can harness the power of music to peer into other characters’ thoughts or remind them of the history of nearby objects.

A Story Split in Two

The story switches constantly between boldly high concept and practical but inconsequential. The amount of filler content on display here would be out of place in any adventure game, but in a story so thin on details, it becomes comical. Lucy, the protagonist, will get lost in dark caves, see the ground give in below her, or destroy the bridge she’s standing on, only to solve a puzzle and get back to square one. Lots of things have happened, but none of them has helped the story at all.

While pacing and inconsistencies make it harder to bite into the story of Children of Silentown, that’s still the star of the game. And the two sides of this narrative, the big theme and the one‑off scenes, are still poignant and appealing. Even if they’re isolated, the short vignettes that Lucy sees in the townsfolk’s thoughts are a fun reward for solving a puzzle. And even if it doesn’t really pay off, seeing the town go from fear to hope gives the game the arc it needs.

Overall, the story ends without ever reaching the heights it could have. It also avoids plummeting down for long stretches of time. No ups and downs, then: the game is perennially stuck in the middle, neither excellent nor terrible. The monotone of the narration doesn’t help either, only opening up in the last chapter, right before the finale.

Even if it shares a lot with classic adventure games, Children of Silentown offers a handful of unique mechanics that get a lot of use. Most of the game happens via traditional point-and-click mechanics, collecting items and using them to solve puzzles. Often, though, no amount of junk will solve Lucy’s problem. Whenever she needs to influence the townsfolk (and eventually other things), she can use her songs instead. By reminding the town of their truest desires, she brings them hope and leads them to act their part.

Lucy’s songs are a sound idea with excellent execution, reinforcing the themes of fear and hope present throughout the story. Each song has its puzzle, and every time the player uses one of the three songs, they are presented with a variation on a recurring puzzle. This mechanic also gives players a break from the normal game loop of finding and using objects with something far more straightforward.

The rest of the puzzles are what you’d expect from a point-and-click adventure. They don’t often pose much of a challenge, exception made for a handful of inscrutable puzzles that nonetheless make for a bumpy experience. Another puzzle issue is the inverted difficulty curve that follows the story: in the last act of the game, puzzles become more artificial, as if detached from their environment. As a result, borrowing your friend’s scissors is harder than activating an ancient, esoteric contraption.

Who Is Children of Silentown For?

As with most adventure games, whether or not you will enjoy your time with Children of Silentown should depend on your story and puzzle preferences. The reality is that the story doesn’t find a complete arc in the game, while the puzzles only fall into their own towards the end. It’s hard to recommend Children of Silentown to anyone but those starving for a new point-and-click adventure, but it would be too harsh to warn potential players away.

Children of Silentown is the epitome of good potential squandered by flawed execution. Story and puzzles are the most evident examples, but the presentation is also weakened by subpar animation and repetitive music. That also means that players that can see past these limitations will find plenty of value here. In a world of gritty cyberpunk and disillusioned present, a competent story that breaks the mold can hold immense value for many.