Fallout 3 hasn’t aged terribly well. Unlike watching a bottle of wine become richer with age, it’s more like flowers not being watered in a long time. And the strange thing is, on the eve of its tenth birthday, that’s absolutely fine. Replaying the title today really shows off the rust, the bugs that run about in the code, and the awkward dialogue deliveries. But given what Fallout 3 meant for open-world RPG’s with FPS elements, it’s an incredibly important game. Bugs and all. 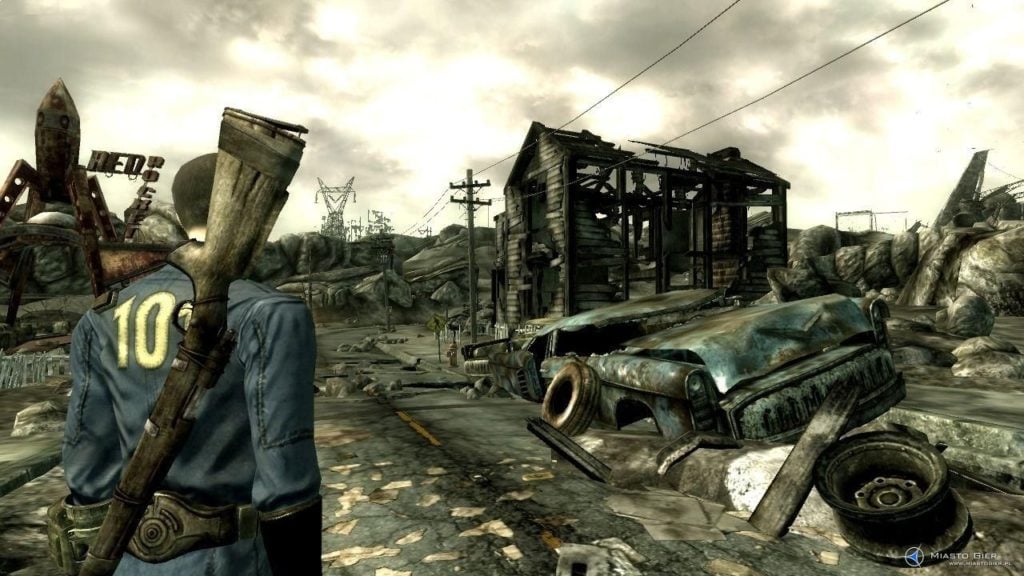 The Lone Wanderer was always one of the best Fallout protagonist titles, aside from ‘Chosen One’ in Fallout 2

The Capital Wasteland, with its brown/green colour palette, washed out textures and awful clipping is not pretty. Which is why it’s oddly refreshing at times. Today’s games are all very clean, very crisp. So to revisit something this grunge-filled and oppressive is actually great. It’s a million times more memorable than The Commonwealth ever was (and likely somehow better than West Virginia will be in Fallout 76).

The opening three hours of Fallout 3 set a mood that not many games have managed to nail comfortably; that of oppressive loneliness. Your radio is your only friend for the most part, and DJ Three-Dog isn’t even travelling with you. Most of this game is characterised by the quiet moments as your walking, which emphasise the damage done by an atomic age. The emptiness is the main feature of this, as the first 3D Fallout title.

It let players look about, and interact with the devastation first hand. Because of this, when you’re walking through the wasteland looking for supplies and loot, when you see another person it’s a rare moment. Seeing a wandering trader, or even just another mercenary, became a unique moment. More so than that, coming across a settlement or city was fun.

Megaton remains one of my favourite opening areas in a video game because of the personality it somehow had in the face of imminent destruction. The firm yet cheery Mayor Simms, the ever-so-serious Doctor Church, and even the slimy bar owner Moriarty all had oodles of personality to them. It was a game that balanced serious consequences alongside a people who were determined to survive, and whose attitudes were all quite natural toward it.

Stories From the Wasteland 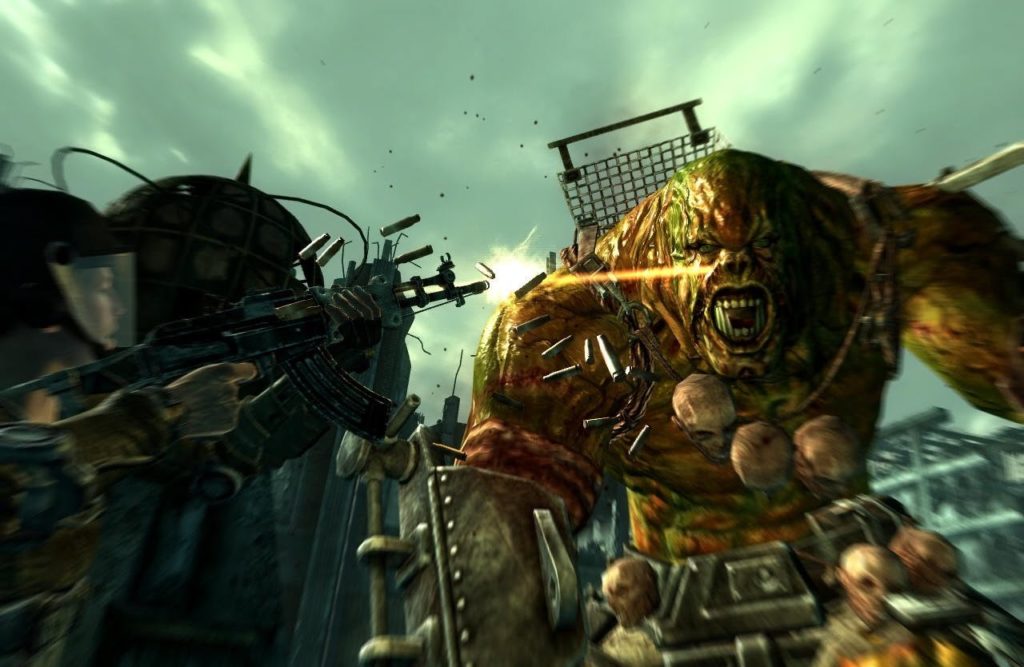 Side missions always had a chance, either randomly or otherwise, to bring you face-to-face with some horrible foes

Fallout 3’s main storyline wasn’t as intense as the affairs in both 1 & 2, but it was notable side and miscellaneous missions that made Fallout 3 shine instead. From saving Reilly’s Rangers on the rooftop of a hotel, to investigating the small settlement of Arefu (and even that infuriating quest to collect thirty Nuka-Cola Quantum’s down in Gildershade), each side mission in Fallout 3 serves a purpose and pulls the player into the area they’re likely exploring already.

Unlike in Fallout 4, where some of the missions are randomly generated slogs designed to grind, there’s a distinctive feeling in 3 that every asset has been placed deliberately to try elicit a certain response from the player. And not every mission played out the same way. Some could be ended with diplomacy (such as Blood Ties), others with intelligence or charisma (like The Power of The Atom & The Replicated Man), or just good old fashioned fighting (too many to list). None of the side missions felt vapid, and rarely felt pointless by the end. They added a much needed flavour to the vast Wasteland, with stories that stick in your mind. 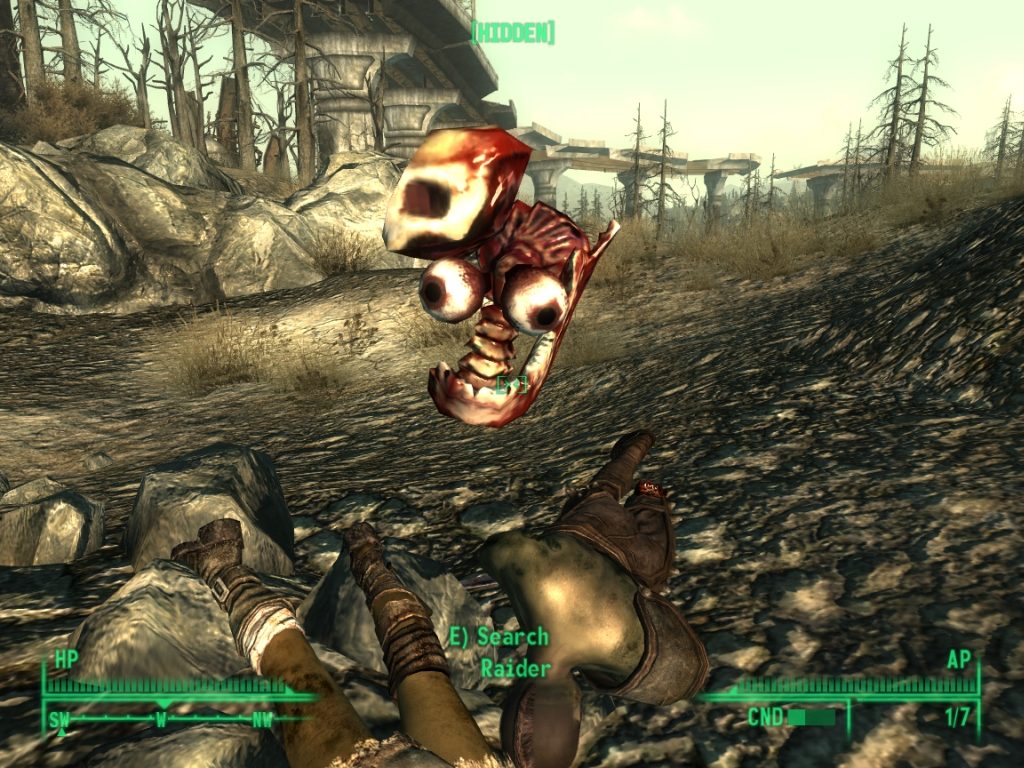 Bugs involving enemies freezing, or remaining in bits while together, were always the best things to see in Fallout 3

No Bethesda title is without its bugs and glitches. Despite all the game-breaking, save-corrupting issues that have dogged Fallout 3, New Vegas, and 4 in different ways, I feel as if the smaller, more stupid bugs are what give the games like 3 such a distinct personality.

If anything, they’re what keeps the game slightly fresh even today, as veterans of the series will go back through it just to see something they’ve never witnessed before. Personally I’ve experienced this. I would bet that a vast amount of other players have too; they’ve gone through a location they’ve cleared numerous times, and then suddenly, there’s an enemy stuck in the ceiling or a weapon bouncing around the room.

Clipping and physics based bugs are the things that seemingly add more dark, surreal humour to Fallout 3 in a way. Besides, seeing Raider corpses having a fit in the ground while you try loot them is side-splittingly funny (also, let’s not forget that physics bug that caused corpses to spasm violently, and fly near the player: you gave me a heart attack on a number of occasions). 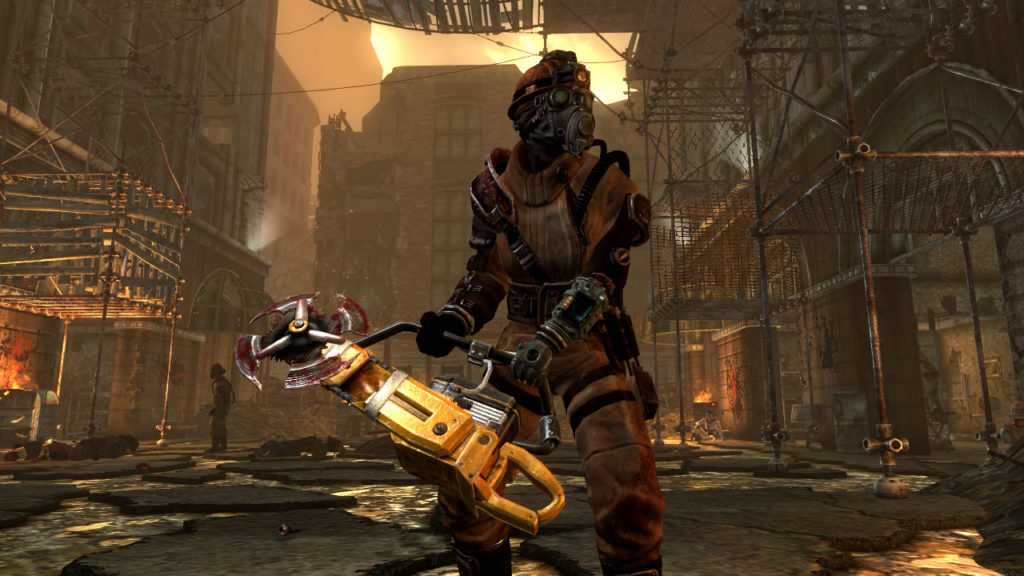 The Pit was especially memorable, with a variety of new weapons – like the Auto Axe, which was a super chainsaw of sorts

Fallout 3’s DLC wasn’t anything to be sniffed at. Broken Steel, Mothership Zeta, The Pit, Point Lookout, and finally Operation Anchorage were each fun in different ways. Broken Steel raised the level cap from twenty to thirty, giving players access to vastly more replay ability, as well as a new climax to the main story that was somewhat lacklustre in the vanilla game.

Mothership Zeta & Operation Anchorage were definitely the weakest of the five, but nonetheless added areas packed to the gills with ridiculous plots, explosions, and exploring. However, the final two: The Pit, and Point Lookout were amazing to play. Ignoring the awful, drab colours of both instalments, the two pieces of DLC were practically fully fledged Fallout titles in their own right.

The Pit took away the players usual armoury, and forced them to survive again, which was a thrill. While Point Lookout was a trip, just an absolute trip in the best ways (I don’t want to spoil any details even though the game is this old, it’s too good of a sequence to ruin). Few games have five pieces of DLC that are all above par, with some still being pretty worthwhile to revisit today.

Looking at Fallout 3’s collection of awards and accolades for too long makes you feel inadequate. At the time of writing, Statista estimates that Fallout 3 has sold around 9.93 million copies, although another article from Polygon puts it at 12.4 million. Either way, those numbers mean that Fallout 3 is the second best-selling Fallout title, right behind Fallout 4.

Alongside that astounding number are ten awards, four of which are ‘Game of the Year’ awards. Perhaps Fallout 3 isn’t flashy, modern, or even smart in some ways. It has clear flaws, from the terrible voice acting to the aforementioned bugs and glitches.

But when it comes down to it, it’s ten years old and yet still very playable. There’s nothing that I enjoy more sometimes than just loading up Fallout 3, and simply going for a wander. Because it’s still just as fun.