From Verdite to Boletaria and from Lordran to Drangleic, death and curses have been prevailing themes of the universes created by Japanese developer From Software. From returns to Sony exclusivity with Bloodborne, the spiritual successor to the Souls series; the same series that made it fun to die over and over again.

Bloodborne, follows in its predecessor’s footsteps with its town of Yharnam suffering from a disease that plagues its citizens and has torn everything to shreds with paranoia, hunts, and death. Fire, corpses, beasts, and coffins litter every inch of road and brick. As a foreign hunter struck with this devilish illness, the path to a cure leads right into Yharnam’s plague-ridden roads.

The story is just as ambiguously brilliant as the Souls games with every detail in the environment, in each item description and in the placement of enemies, cleverly placed to tell their grueling tale. From has never forced a story down the audience’s throat like most AAA games. They have found the perfect medium to do so that doesn’t sacrifice gameplay for exposition and they continue to use it with Bloodborne.

While traveling through Yharnam, slaughtering beasts and unraveling all of its secrets, the hunter will travel to The Hunter’s Dream by resting near a lit lantern, Bloodborne‘s version of a bonfire. In this surreal island in the clouds, the hunter can use the blood echoes he gathered from slaughtered beasts to level up, buy items and upgrade weapons. Unlike hub worlds like The Nexus, you’ll be rather lonely here as most NPCs will remain in the waking world.

Despite the rampant wave of death that has totaled the city, there are a few remaining townsfolk who are attempting to wait out the night. Completing their sidequests will access more items, weapons, and optional bosses. While definitely an intriguing aspect to the lore of the game, the amount of townsfolk is limited compared to past games and the sidequests they offer lack in depth of any kind. It’s all meeting a person in a certain area or telling them to go to a certain place. You won’t find anything as in-depth or heart-wrenching as Siegmeyer of Catarina’s tragic tale from Dark Souls. 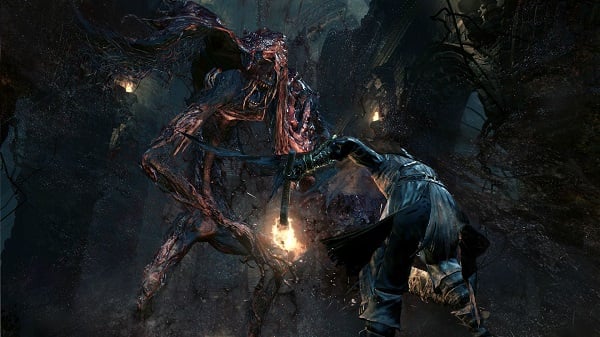 The inhabitants of Yharnam live in their brooding Victorian labyrinth doomed by a curse they’ll never fully understand. Yharnam is appropriately chaotic and unnerving in its architecture. Standing amidst a sea of stone, a feeling of helplessness is difficult to fight away. Looking out over the horizon of Yharnam is like looking into an M.C. Escher painting, everything is beautifully and nonsensically built together.

The hunter will travel to a variety of areas throughout the night, with each new place a maze of twists and turns that seem to expand until forever. The beauty of Bloodborne is in the level design. While Dark Souls 2, felt like a linear, start-at-point-A-end-at-point-B, adventure, Bloodborne will have you explore whichever way the player desires. Each path feels like a step of progression and will lead to something, for better or worse. 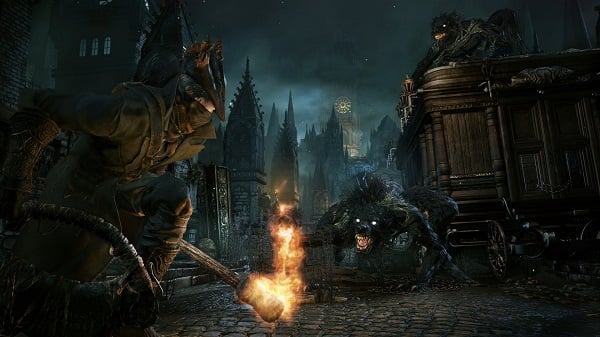 Of course, beasts of all shapes and sizes lurk in every dark alleyway of Yharnam, waiting to spill a hunter’s blood at any moment. But beware, do not go into battle expecting slow moving and attacking enemies like those in Dark Souls. Bloodborne boasts the fastest combat in the series, even faster than Demon’s Souls. It’s an offense-focused game where those who attack quickly and decisively are rewarded over more patient and lingering fighters.

A new gameplay mechanic called rallying has been implemented that further solidifies the highly offensive combat. When an enemy takes damage from the hunter, the missing damage turns yellow and will linger for a few seconds. In this time, the hunter has a choice to make. He can either back off, heal with a blood vial, and think of another plan of attack or attack the beast back and retain the lost health. Rallying balances the attack-heavy combat and lack of shields by giving the player a bit of an incentive to strike madly against the enemies like the beasts to which they are slowly becoming.

There are two types of weapons to master in Bloodborne, trick weapons and firearms. Trick weapons are right handed weapons that have many forms of attack. They all have their hard and regular attacks, same as the other Souls games, but now by pressing the R1 button, they can transform into a variant. The variant of each trick weapon can change it’s range, its strength as well as the kind of damage it inflicts. Knowing a trick weapon inside and out and how to control them is the key to victory especially seeing as each is actually two weapons in one.

The firearms are left-handed weapons that shoot long-ranged projectiles. Most of them don’t pack much of a punch, but they do create vital openings in the enemies’ attack patterns for a devastating visceral attack.  They replace the shields of the Souls games that allowed for a more defensive means of combat. InBloodborne, there’s nothing to hide behind, so the only means of defense is offensively shooting the enemy to prevent their attack or by quickly side-stepping to find an opening. 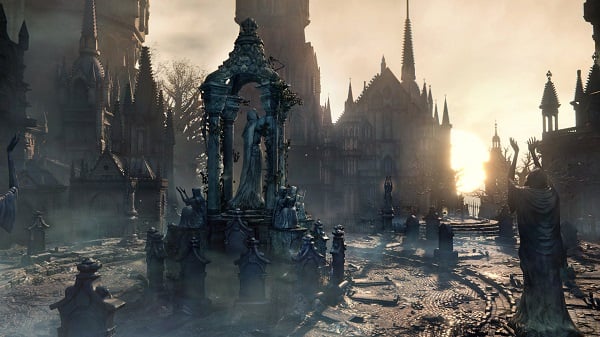 All weapons can be embedded with blood gems which give them different attributes like higher overall damage, lightning damage, or arcane damage. While all weapons can be leveled up to +10, blood gems are the only way to allow for different properties. Don’t expect to max out the level of most of your weapons, however, because there is only one item per playthrough that will get any weapon, firearm or trick, to +10.

Arcane takes the place of faith and intelligence this time around. The arcane spells are treated as ordinary items that have unlimited use only if the arcane skill is leveled high enough. Unfortunately, the number of these Hunter’s Tools is embarrassingly limited with only nine found throughout the game. While useful and adding more variety to combat, the limited number discourages arcane builds.

The firearms and trick weapons call for different strategies on the part of the player but it feels like a step backward from Dark Souls. While Bloodborne‘s combat is much quicker, it’s also much more shallow. There’re not nearly as many weapons in this iteration. It is actually possible to attain every weapon rather quickly in one playthrough. Bosses won’t actually give a means to make new weapons but rather defeating certain enemies will unlock badges that will open up more options from the merchant messengers in The Hunter’s Dream, which could also be newer weapons. Souls fans might be disappointed, especially with the fact that attaining every weapon in the past was a major process that took multiple playthroughs and more dedication.

In fact, most of the items, sidequests, and weapons can be achieved in one playthrough. Even covenants are limited in Bloodborne. There is only a total of three and once they’ve been joined there’s not much to do with them. There isn’t much for dedicated covenant areas, either. You won’t see anything to the extent of The Doors of Pharros in Dark Souls 2. 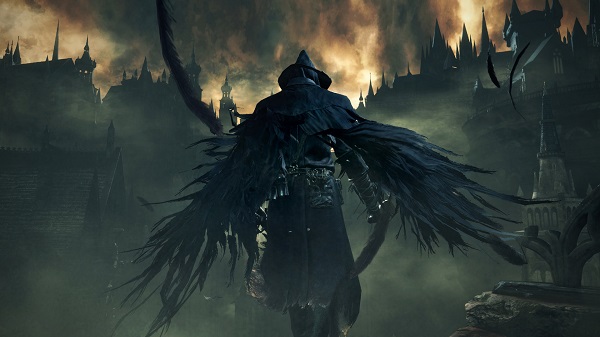 Player versus player, cooperation, and combat return with items called beckoning bells. If you’re having trouble fighting a certain boss or passing through a particularly tough area, beckon a fellow hunter and rid the beasts side by side. If you want to experience some of the most chaotic and skill-testing battling of the series, play online and try invading to see how you stack up against the hunters around the world.

Being a Souls game, dying will no doubt be common. However, because of one glaring technical flaw, death becomes a much bigger annoyance this time around. The load times in Bloodborne wouldn’t be nearly as much of a problem if dying wasn’t a huge focus on the game. During boss battles, one can expect to die quite a few times. You’ll die and want to get back to the battle as fast as possible to retrieve lost blood echoes. Treading through an entire area while running past enemies is one thing but add the 30 to 50 second load times to the mix and frustration is guaranteed to arise.

The blood vials, which heal the hunter, and the quicksilver bullets used for the firearms will need to be constantly in stock as they will not be replenished upon resting at a lantern like in Dark Souls. This actually feels like a throwback to farming grass in Demon’s Souls. It’s nice to have a little more to lose upon death than just blood echoes seeing as how insight and max health don’t deplete.

While playing through the main game, hunters will come across special chalices that can be used on tombstones in The Hunter’s Dream. By using these chalices along with special sacrificial items, a dungeon will be procedurally created for the player to explore.

If you think the 30-hour main game is short, the chalice dungeons can easily double that time. There are about 30 different chalices that will procedurally generate a dungeon to explore so that every time you place a chalice, the experience is different. If you explore a certain dungeon that is particularly unique, you can even upload it to the Bloodborne servers for others to share or even help you out. There are vastly different enemies and bosses only found here as well so these extra dungeons are vital to gaining the entire Bloodborne experience.

Bloodborne is a bold new direction for the series but fans of the past Souls games will find the experience overall to be underwhelming. With all of the aspects that Bloodborne lacks, it remains a perfectly competent game and one that could hold its own among its peers. The score, enemy design and voice acting are all superb and memorable. This genuinely unnerving world is one that shouldn’t be missed. Don’t be afraid to venture into this hunt, you’ll be sure to walk away bloody and satisfied.