A major theme that seems to have been present in recent game development history is that bigger is better. The phrase “open world” has been used more times than can be counted, single player games have received supplementary multiplayer modes, and side quest upon side quest has been added to make them seemingly never-ending.

While some of these games have been absolute masterpieces and deserve every bit of praise and hype that they have received, some of the more simplistic gameplay ideas have either fallen to the side or been concealed under a myriad of other features.

Enter Automata Empire. At the center of the game is one concept: the feedback loop. This simply means that each output in the game’s system will be used as a new input. Drawing inspiration from Conway’s Game of Life, Nonadecimal Creative challenges the player to amass an army of fuzzy automata, each with a numerical value. As these minions combine and reach numerical values of six, they will split and create a new automata. 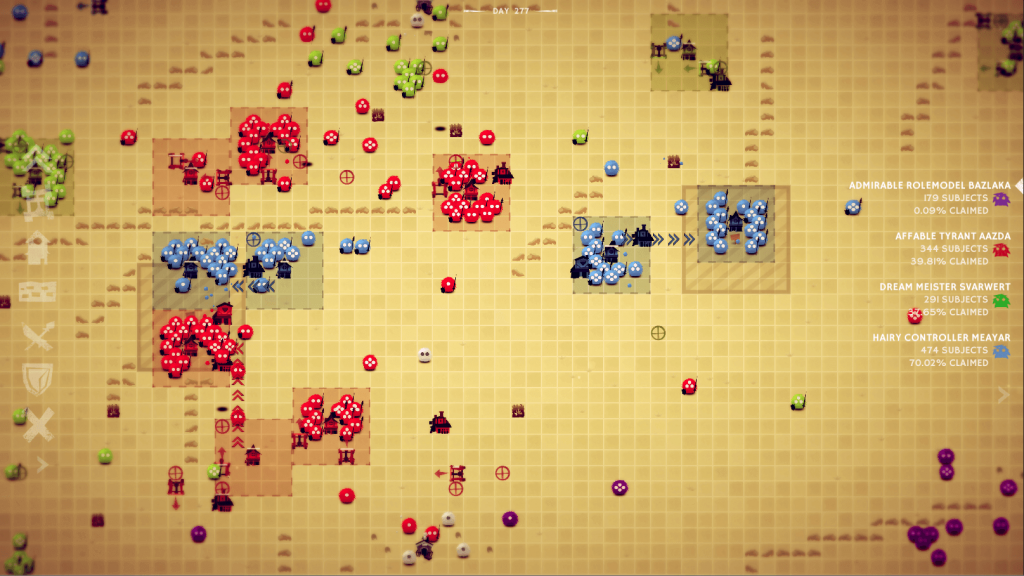 Taverns serve as a hub for your automata, encouraging them to combine and repopulate your army.

This is where the feedback loop comes into play. Each increase in the population via this method leads to one more automata that is ready to combine, creating a cycle that will continue as long as there is a steady stream of inputs (automata combining). These minions are either used as warriors against the enemy, or sacrificed to construct buildings to guide their movements.

The key to victory comes in mastering the management of this population. While early expansion is tempting, having patience and allowing your furry soldiers to combine and expand around Taverns may ensure your success.

If there is one good thing about Automata Empire, it’s that Nonadecimal Creative crafted a product built for replayability.

Automata Empire has been designed so that matches last no longer than 12 minutes, win or lose. This seems to be the perfect time for a quick game break over lunch or in between binge watching episodes of Westworld. However, if one requires an even shorter experience, Lightning Mode will play the game at two times the normal speed.

This quickness of play is also a blessing for players like me, who just do not enjoy a vast majority of this game. Automata Empire is a title that can be incredibly polarizing. There are certainly players who love it, and for them, the quickness of the matches allows them to fit more scenarios into their allotted gaming time.

Despite how short the matches were, I still counted down the seconds until they ended. There are some issues with the reliance on the feedback loop as Automata Empire‘s backbone, and while the combination of its mechanics with the automata armies hypothetically creates a seemingly endless number of scenarios, many of these were, to be blunt, boring.

The Much-Needed Bit of Humor 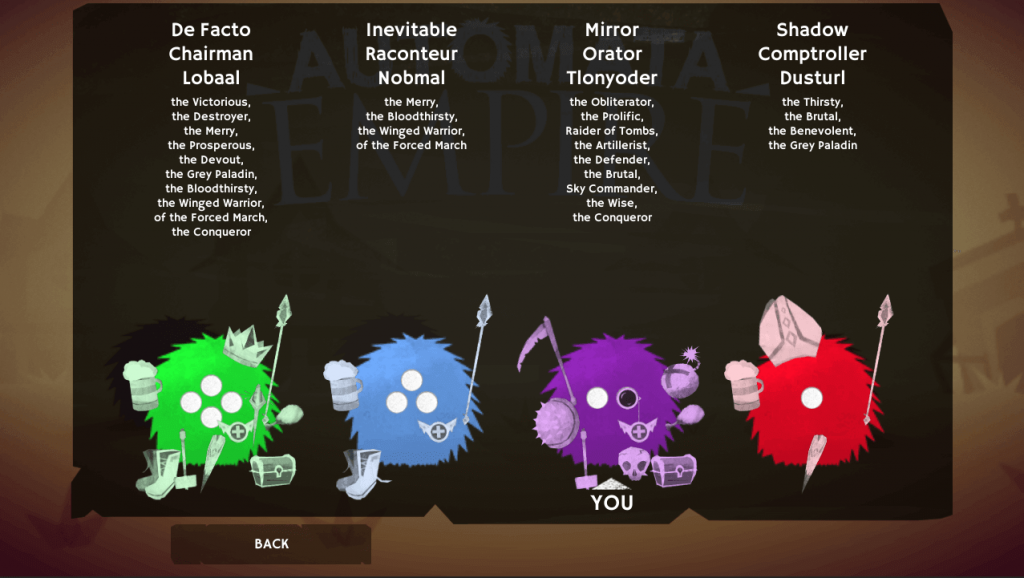 The game’s only somewhat frilly feature is the generation of the most ridiculous titles and hero names that could ever be imagined. These are unlocked by accomplishing certain tasks, adding a bit of comedy to a game that otherwise doesn’t have many features beyond the core gameplay.

These titles also give the player one more objective, if small, to aim for. In Automata Empire, any objective or game constraint can seem massive due to their scarcity. Although seeing the ridiculousness of some of the names was incredibly enjoyable, this was at least partially due to how dull most of the matches were. There needed to be more of this humor, this light-hearted vibe, somewhere in the game, and it simply did not exist.

Siegecraft Tries to Save the Game

While I did not care for much in Automata Empire, Siegecraft was the game mode that finally succeeded in showing me real potential. The objective of this mode is straightforward: protect your castle from the enemy soldiers at all costs.

That the game hinges entirely upon the concept of the feedback loop is intriguing, but it isn’t implemented in the most engaging way. While all the modes give you an objective that requires you to take advantage of the loop, most still feel somewhat underdeveloped.

The game begins and the player has an enormous amount of freedom due to the lack of constraints. However, this freedom can be overwhelming, especially when combined with the initial task of figuring out how to take advantage of the loop.

By giving you one small section of the map on which to focus your attention and resources, Siegecraft has the perfect level of constraint. This limit was the key to crafting a compelling game mode. Nothing else truly worked for me, but felt that this small section of Automata Empire could easily grab one’s attention for hours at a time.

Has Potential, but Needs Work

If Automata Empire grips you, it has you completely. I experienced this for a short time in Siegecraft mode, and it showed me the potential of the game’s core concept. When everything works together perfectly, Nonadecimal’s creation can be great.

However, this does not happen often enough. Not even close. Although the matches are short, there are still plenty of moments where there is nothing to do but watch the screen, and while constant action is certainly not required for a game to be interesting, waiting around in with nothing to do is dull and allows Automata Empire to grow stale much faster than it should.

This just isn’t a game for me; or at least not right now. The elements are there and the idea is intriguing, but it needs more: more time in development, more game modes, more buildings. The upgrades need only be small, preserving the core gameplay and art style, but they need to add the focus and humor that would take this game to the next level.

Automata Empire is like a soup that you forget to add the spices to. It’s edible as it is, and you might even get a bite that has some real flavor, but with a little pepper, salt, and red pepper flakes, it could reach an entirely different level. Unfortunately, in its current state, it just seems undercooked.