Video games have a longstanding history of taking from predecessors in both style and mechanics. A Hat in Time plays wonderfully as a modern take on the collect-a-thon era of Super Mario 64. VA-11 Hall-A uses the presentation of Snatcher for a stylish game about “cyberpunk waifu bartending.” Aegis Defenders abides by much of that philosophy. 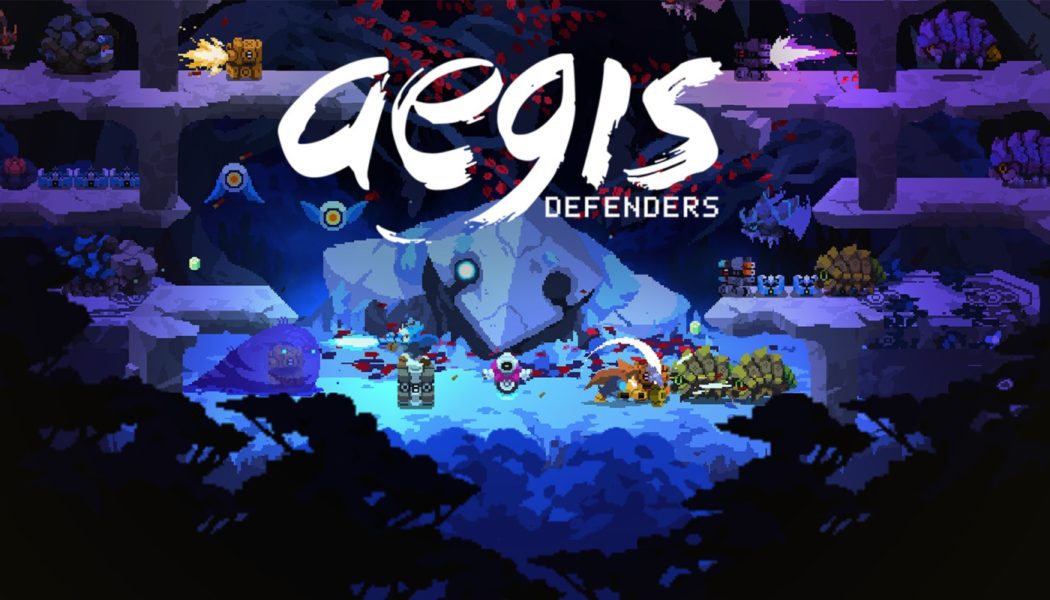 Aegis Defenders wears its heart on its sleeve. The anime and JRPG influences are undeniable. Yet, rather than relying on them as a crutch, the game uses them to weave a charming storybook narrative.

A classic story of rebels fighting an evil empire, the game manages a fresh take on an old idea. Players follow Clu, a plucky ruinhunter whose chance discovery of an ancient artifact sets her on a perilous path to adventure. If that premise sounds familiar, there’s good reason for that. Aegis Defenders draws heavily upon narrative tropes present in other stories, from Chrono Trigger to Nausicaä of the Valley of the Wind to Tales of Phantasia.

While the game’s story is simple and predictable, its characters are endearing enough that this works in its favor. Whether it’s the lovably gruff Bart or the cocksure Zula, the main cast’s distinct personalities shine through fun dialogue and gorgeous designs. Not only do they feel alive, they feel like they inhabit their world. 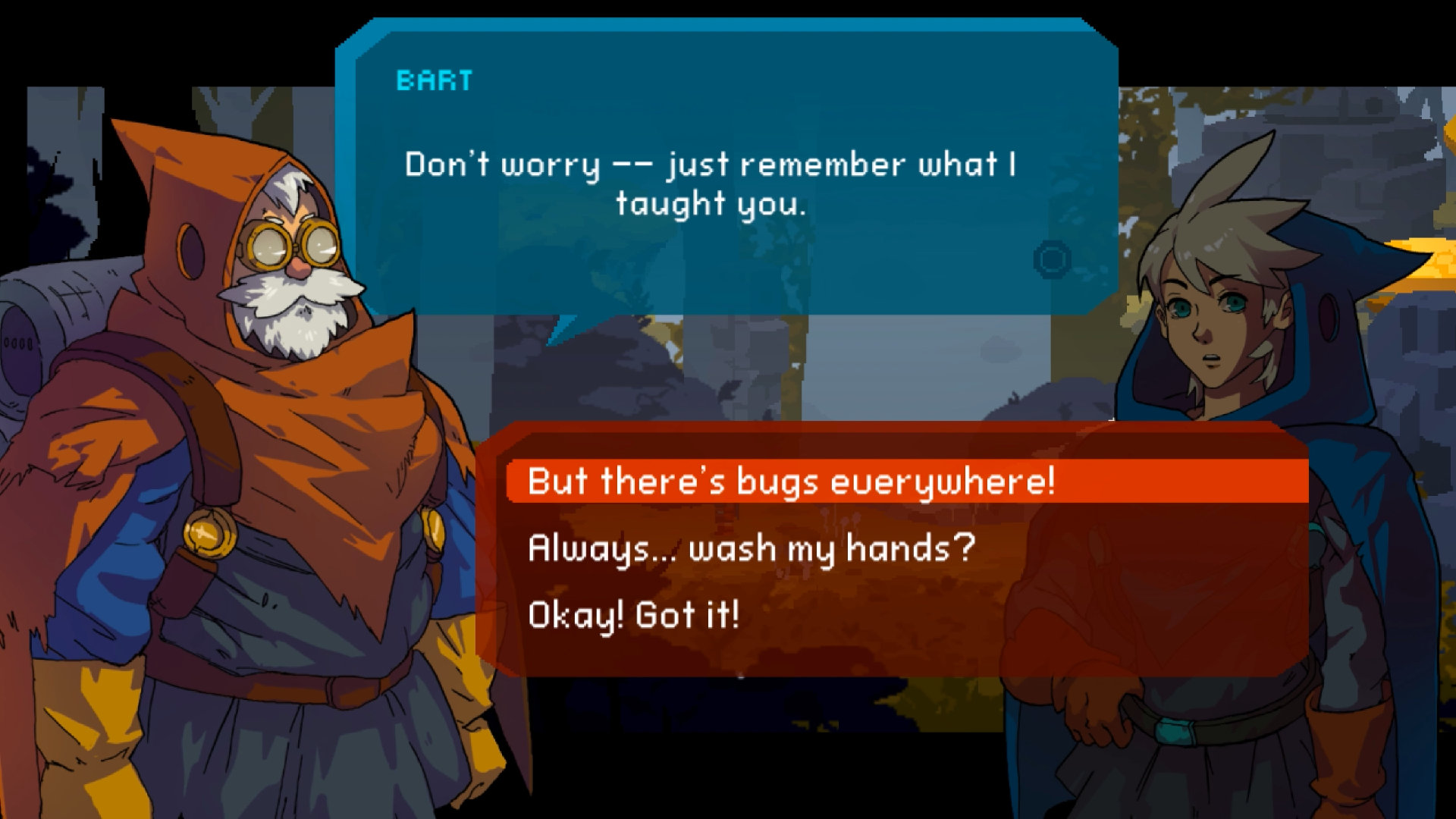 Aegis Defenders makes the effort to establish its world and mythology, dispensing narrative through a variety of ways. Dialogue, cutscenes, and the environment itself tell a vivid story through both explicit and implicit means.

While there could certainly be more to expand the story, what exists in the 10-12 hours of gameplay is satisfying on its own. Even so, the story doesn’t exist in a vacuum; it’s merely one part of the larger picture.

Like its narrative, Aegis Defender’s art is a heartfelt homage to what came before it. In a market saturated with retro, game-y graphics, the game takes it a step beyond by painting with pixels. Its distinct sense of style evokes a level of artistry not unlike that of Square.

A cursory look at game director Bryce Kho’s Instagram reveals a lengthy library of illustrations. Kho’s body of work is impressive not only in its volume but its technique and style. His traditional artistic sensibilities easily transfer into a digital medium and breathe wonder and magic into Aegis Defenders.

Broad scenes of sweeping vistas and soaring landscapes flesh out the game’s world. Lovingly detailed environments intermingle with vivid color palettes, bold tones framed within strong linework. The presentation is a crucial part of the experience, for both gameplay and narrative. 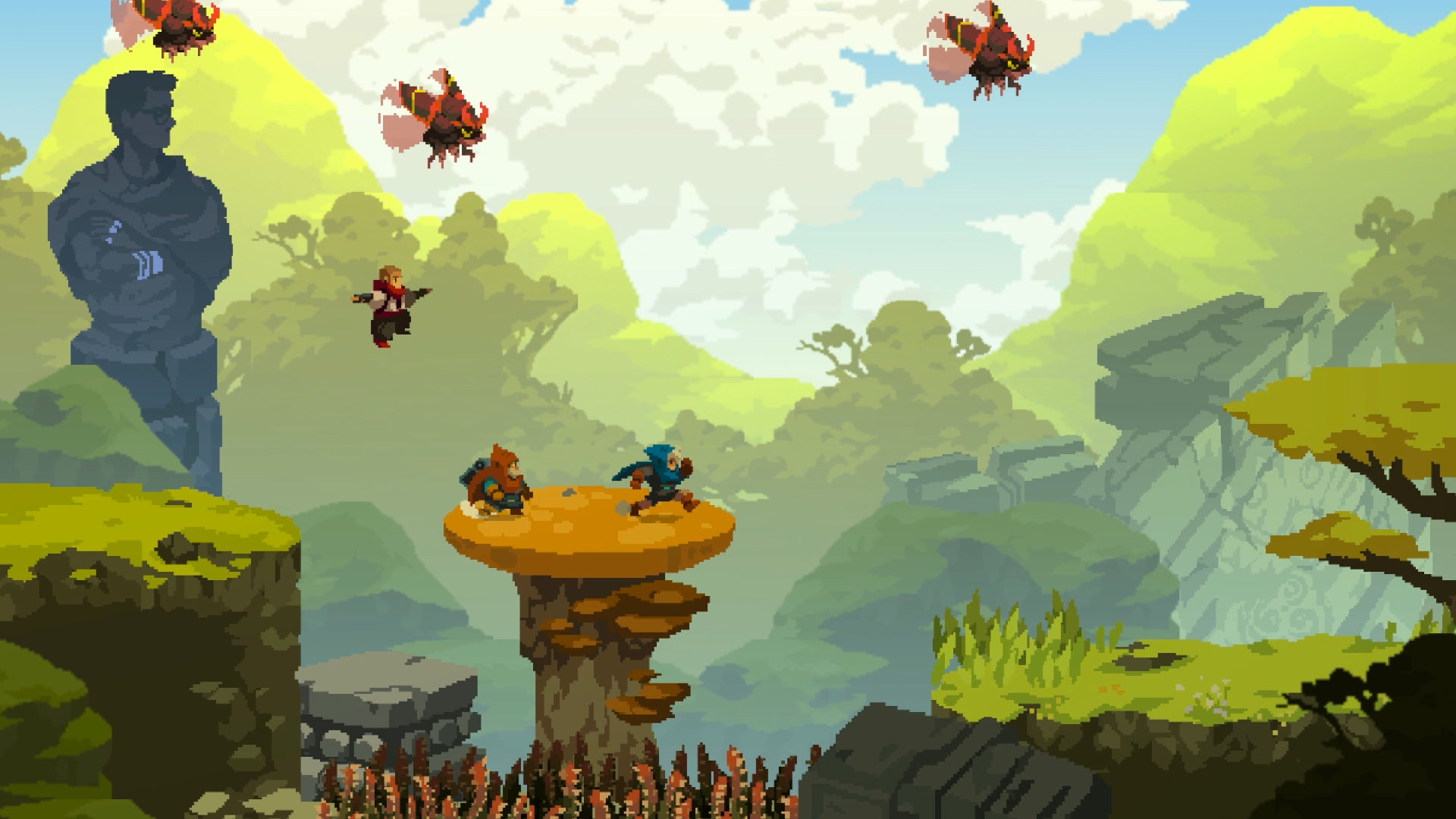 Through a series of cinematic cutscenes, the player learns about the fall of the Deathless at the hands of humanity. Stark monochromatic tones set against a black void give the impression of legends long past.

In addition to beautiful visuals, Aegis Defenders‘ sound design does a wonderful job of immersing the player into the experience. Beautiful, melancholic, and ethereal sounds relay a world struggling to pull itself from the brink.

Aegis Defenders abounds with style in so many regards, calling back to the classic JRPGs it draws so heavily from. Whether braving a deep, dark forest or traversing windy, craggy peaks, the game goes to great lengths to immerse you in its wonderful art style and soundtrack. 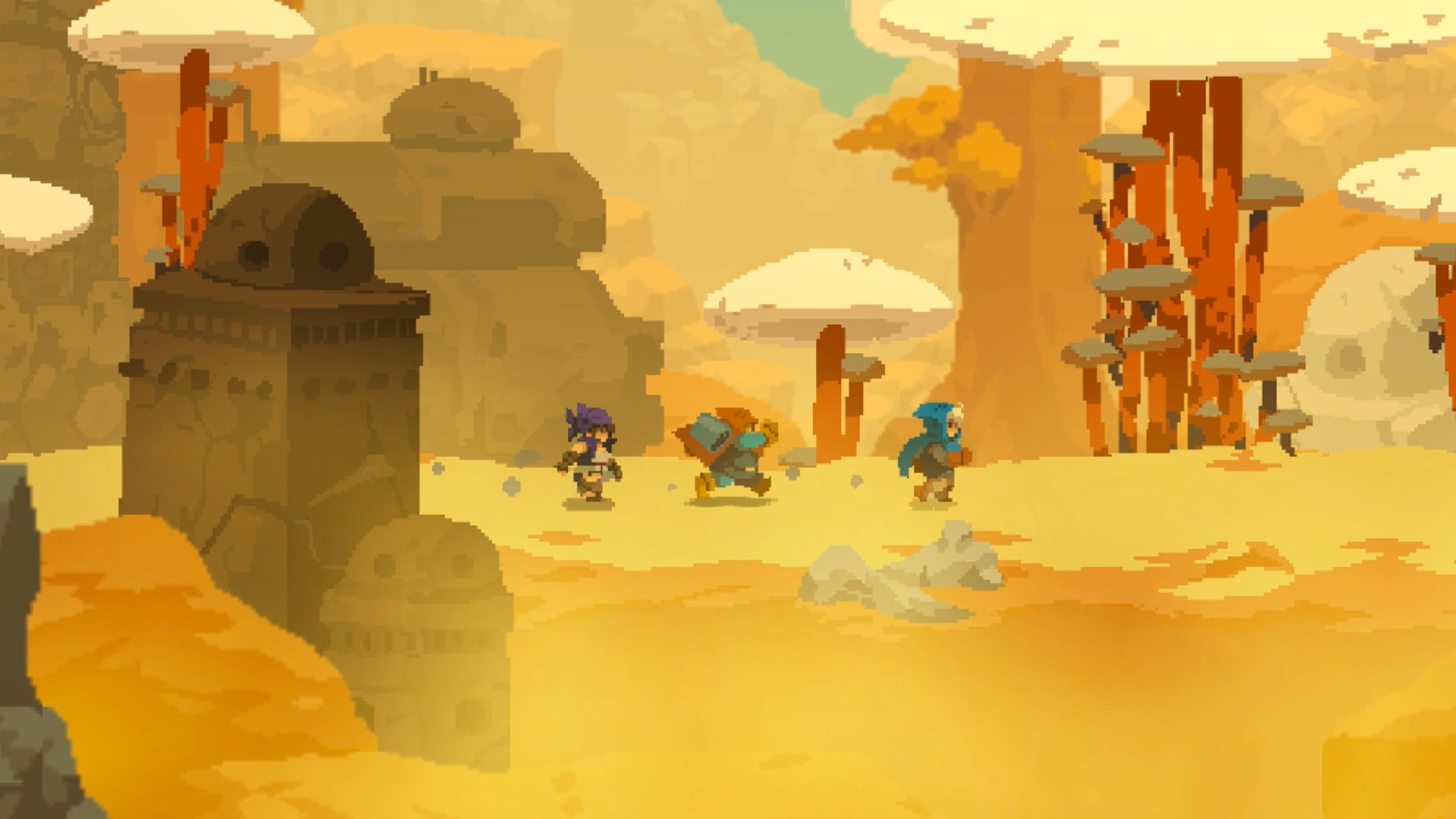 Aegis Defenders distills the core concept of “Tower Defense” and captures its most salient points: building structures to defend an objective. As a video game genre, Tower Defense exploded in the mid-2000s, thanks to Warcraft 3 mods and flash games like Desktop Tower Defense. Games like Dungeon Defenders, Plants vs. Zombies, and Sanctum have experimented with the mechanics (to varying degrees of success), seeking to recapture the addicting appeal behind Tower Defense.

Through its various design choices, GUTS Department has made Aegis Defenders quick and snappy to play. With a robust framework of systems and mechanics, it gives players the tools to be creative within a fast-paced context. Unlike traditional Tower Defense games, Aegis Defenders encourages quick reactions and improvisational adaptability.

Aegis Defenders advertises three key components to its gameplay: explore, build, and defend. As an action-platforming, tower defense game, it throws a lot at the player. Different environments, enemies, towers, and abilities fill the rosters. Yet it never feels like a chore to learn them.

GUTS Department exhibits a masterful understanding of game design in emphasizing “learning-by-doing.” It doles out new mechanics piece by piece during the exploration phase, framing them as small platforming puzzles to actively engage in. After learning whatever new concepts the level has to offer, players finish off with a hectic Tower Defense. 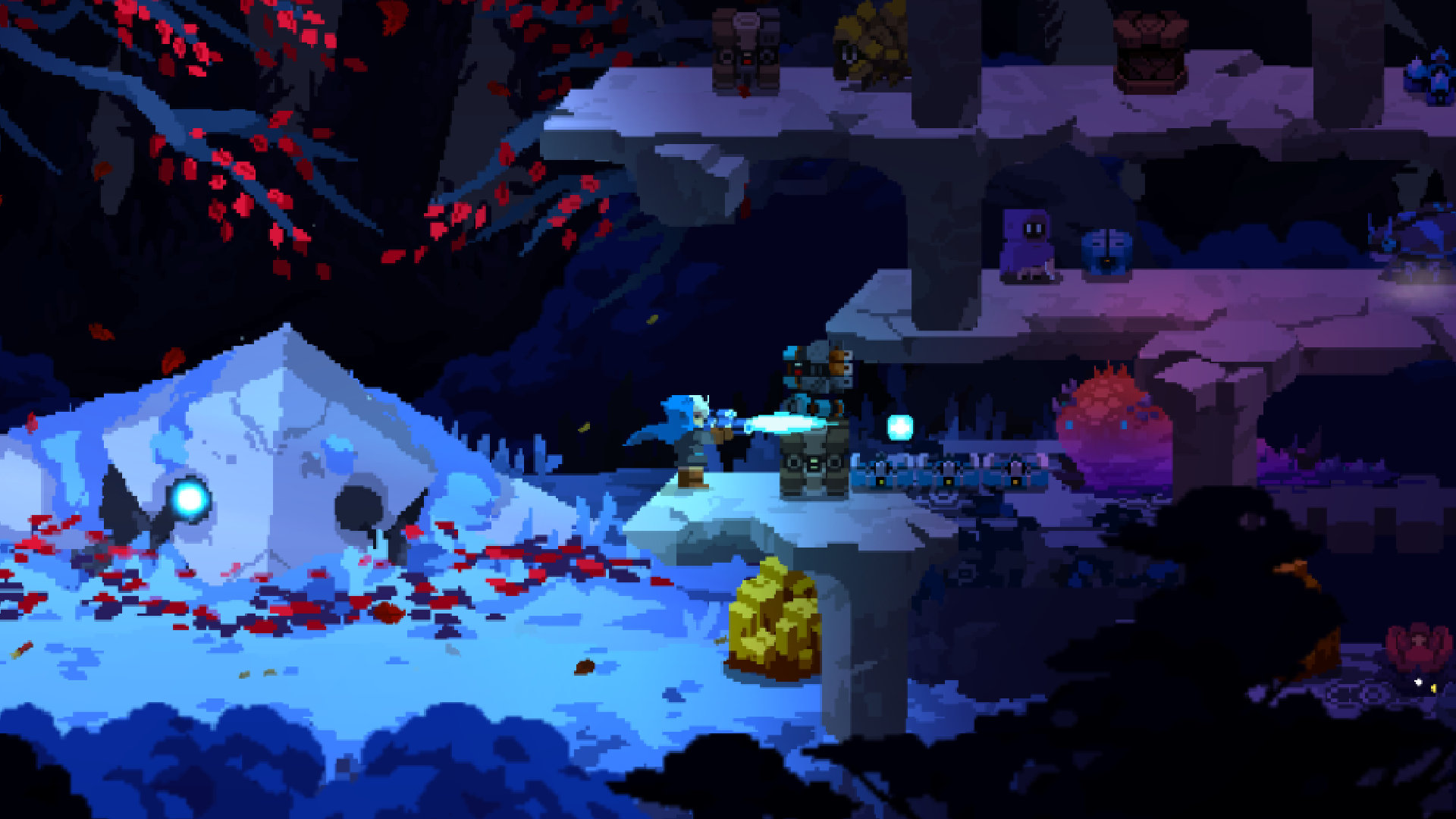 New enemies and abilities are put to the test during the Tower Defense segments, encouraging the player’s creativity. Because the game doesn’t restrict you to a grid-like most Tower Defense titles, you can move and create as you please. There’s no “right” way to play. The eighteen structures and four available heroes allow for a variety of strategies.

Tower Defense, by nature, requires the player to multitask. It demands you pay attention to the flow of combat, structure health, and placement, as well as your resource pool. Add to that four controllable characters with unique loadouts and abilities, and you get frantically fun combat.

The ability to pause the game when switching characters gives Aegis Defenders an interesting dynamic. It eases much of the stress in multitasking while still requiring you to predict and adapt to the flow of combat. In the later levels, things can quickly spiral out of hand if you aren’t smart about your choices. 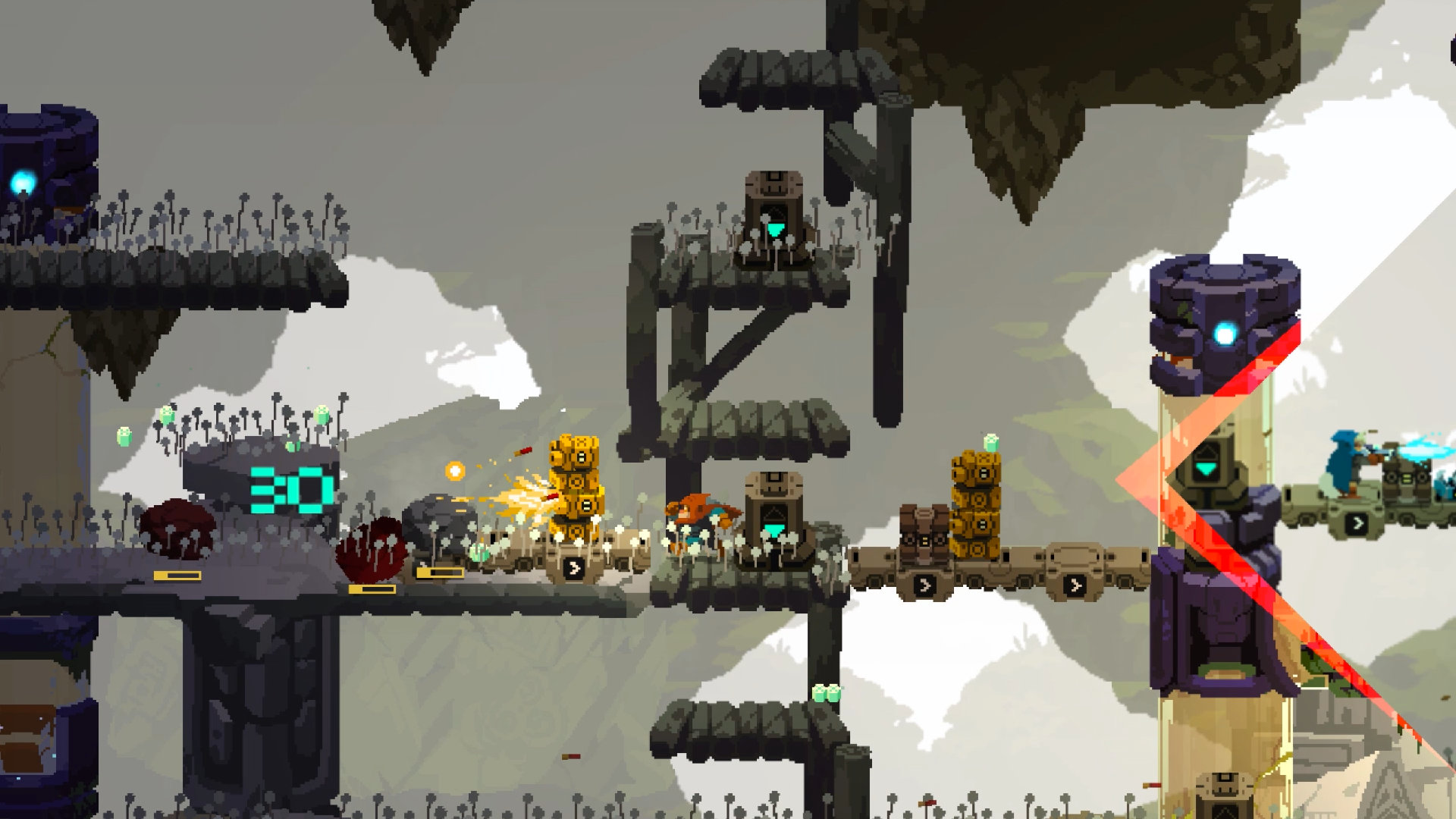 Aegis Defenders is quite challenging, especially on harder difficulties. Still, the game offers a nice selection of upgrades to give you some wiggle room for mistakes. Even if you do die, it never feels like a hassle to retry a level. Between the core gameplay and free-form building, the game just feels fun to play.

That said, Aegis Defenders does have some minor issues. There are times when the platforming mechanics feel stiff to control. These are more pronounced in co-op mode, where pausing doesn’t exist as a mechanic.

You and your friend must communicate through hectic callouts, trying to cover ground with multiple characters. This disrupts the strategic flow of combat present in single-player and exacerbates the platforming issues. While co-op is still fun, the game functions best as a single-player experience. 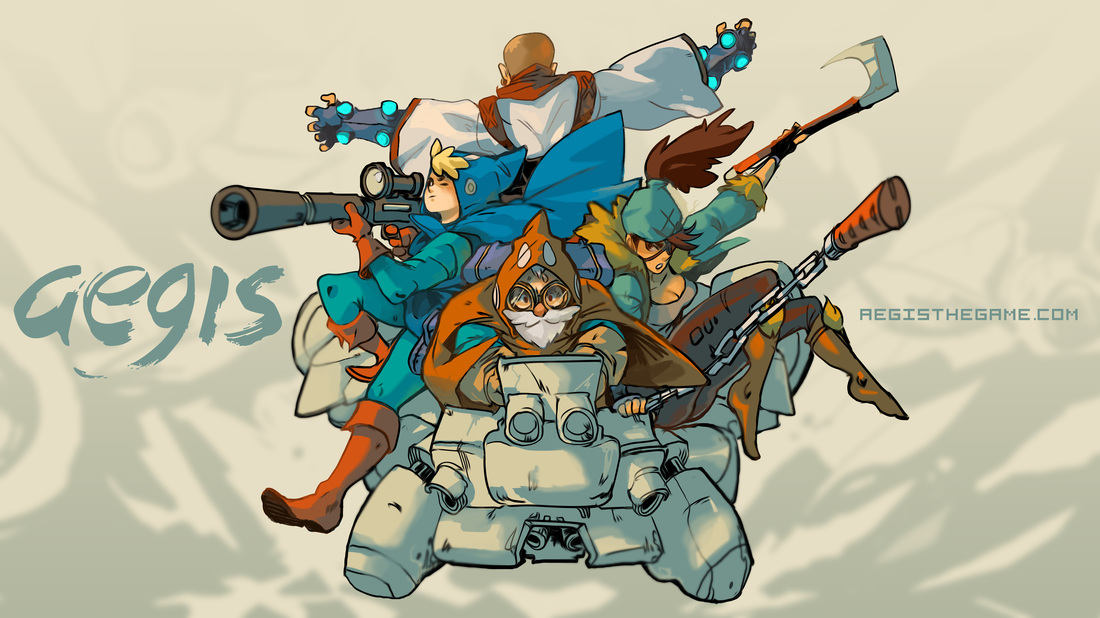