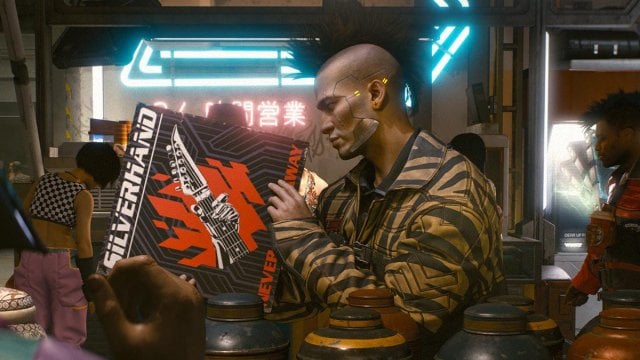 Since first cruising the streets of Vice City at too young an age as 80s classics from Slayer to Blondie blared through tinny speakers, music has felt like an essential and integral part of video games. Having spent the past holiday period playing Cyberpunk 2077, the importance of music’s ability to enhance immersion and connection while establishing a sense of time and place has been at the forefront of my mind.

Music, in fact, is at the core of Cyberpunk; Rockerboy legend Johnny Silverhand and his once infamous band Samurai are omnipresent, weaving themselves around the game’s central narrative thread, meanwhile combat encounters are punctuated by composer Marcin Przybyłowicz’s exhilarating score. Much like Grand Theft Auto before it, Cyberpunk throws you into a bustling fictional city, one rich with a variety of cultures and sub-cultures, each with its own fashions, cuisines, aesthetics, and musical genres. Reflecting the melting pot that is Night City, the in-game radio stations offer a diverse catalogue of artists and genres that sparked in me a nostalgic sense of discovery, one with its roots in my formative years of gaming.

While original scores capture a bespoke atmosphere; be it Shoji Meguro’s ear-worm-laden jazz-inspired score for Persona 5 or Austin Wintory’s sweeping, meditative arrangements in Journey, I’ve often found licensed music to be uniquely immersive in a way entirely its own. My love of rock, metal, and punk as a teenager drew me to Tony Hawks, Burnout, and Guitar Hero, the music in each acting as a shorthand to connect me to their world. In turn, these games cultivated my love of music, exposing me to new artists and new genres like hip-hop and indie that fell outside my narrow music taste at the time.

As my relationship to games and music evolved, games like Fallout 3 further broadened my horizons. One of the main reasons that that game engrossed me so is how it uses music to establish a sense of time and place. The jazz, blues, and rock’n’roll of its soundtrack transported me to a different era, its Americana lending an authenticity to the retro-futurism of its setting, while exposing me to a rich musical culture I may have otherwise overlooked. This left a lasting impression, and bands like The Ink Spots instantly cast me back to my time with Fallout 3, so intrinsic was that music to the experience.

More recently, Watch Dogs: Legion struck a similar chord. Hearing British artists like The Chemical Brothers, Buzzcocks, and my hometown heroes Turbowolf pouring from the diegetic in-game car radio lent a comforting familiarity to the streets of London. Likewise, songs by grime artists like Skepta and Stormzy furthered this sense of place, echoing a quintessential Londoness that not only made Legion feel more grounded in its setting but piqued my interest in a homegrown music culture I had given little attention to.

In this same spirit, I’ve often created my own pairings, creating a link between certain artists or albums and a given game. One of these pairings that has really stuck with me is Deafheaven’s album Sunbather acting as my soundtrack to GTA V. This was through pure coincidence as both the album and game released at a similar time but for me, they seemed to fit together as if designed that way, the album’s themes of wealth’s empty allure echoing the game’s narrative. Combined, the two stamp a moment in time for me that reflects an experience that feels uniquely my own.

I distinctly remember rays of light piercing the water’s surface as I piloted a submarine around Los Santos’ coast, Deafheaven’s “Vertigo” crescendoing as I did so in a moment of harmonious happenstance. Whether orchestrated, like Rockstar’s expert use of José González’s “Far Away” during Red Dead Redemption’s border crossing sequence, or serendipitous as a result of one’s own concoction, there’s a magical feeling akin to flow that comes from this harmony between music and games.

It’s this arresting affinity between music and games that Cyberpunk’s soundtrack so effectively captures, particularly in its enticing sense of place and discovery. Night City is a heady mix of neon and grime; from the smog and sleaze of back-alley ripper docs and dive bars to the sun-soaked decadence of hillside mansion sitting safely above the gloom, this dystopian vision of the near future feels both fantastical and familiar. It is apt then that its soundtrack echoes this duality. Contemporary artists like Run the Jewels, Grimes, and Refused, among others, all showcase brand new music in Cyberpunk. This, paired with the fact each band is presented under an in-world pseudonym, creates the illusion that this world and our own are one and the same.

This rang especially true for me as I heard Converge’s (Shattered Void) “I Won’t Let You Go” for the very first time, thundering from V’s car radio as I tore through Watson. It was a surreal sensation, one that managed to blur my reality with the fiction of Cyberpunk in a uniquely immersive way. Excited by this instance, I worked my way through each station, discovering a wealth of new artists that, under Cyberpunk’s spell, felt as if plucked from the future and pulled back through some portal to the here and now.

One song, in particular, conjured that rare moment of flow. I was returning from a mission in the Badlands, speeding back into the city. A tapestry of neon reflected off the rain-soaked road as Le Destroy’s “Kill Kill” pulsed beneath the hum of my motorbike. This perfect, cinematic moment where gameplay, visual design, and music coalesced to create something holistically immersive is something video games can achieve like nothing else.

Music and games will forever have a symbiotic relationship. Whether music sparks your interest in games or games fuel your love of music, the two-act as gateways to one another. Games can be a space to discover new music or experience music you already love in exciting new ways. From blurring reality and fiction, transporting you to a different time or place, or creating a bespoke experience that feels uniquely yours, music lies at the heart of immersion.