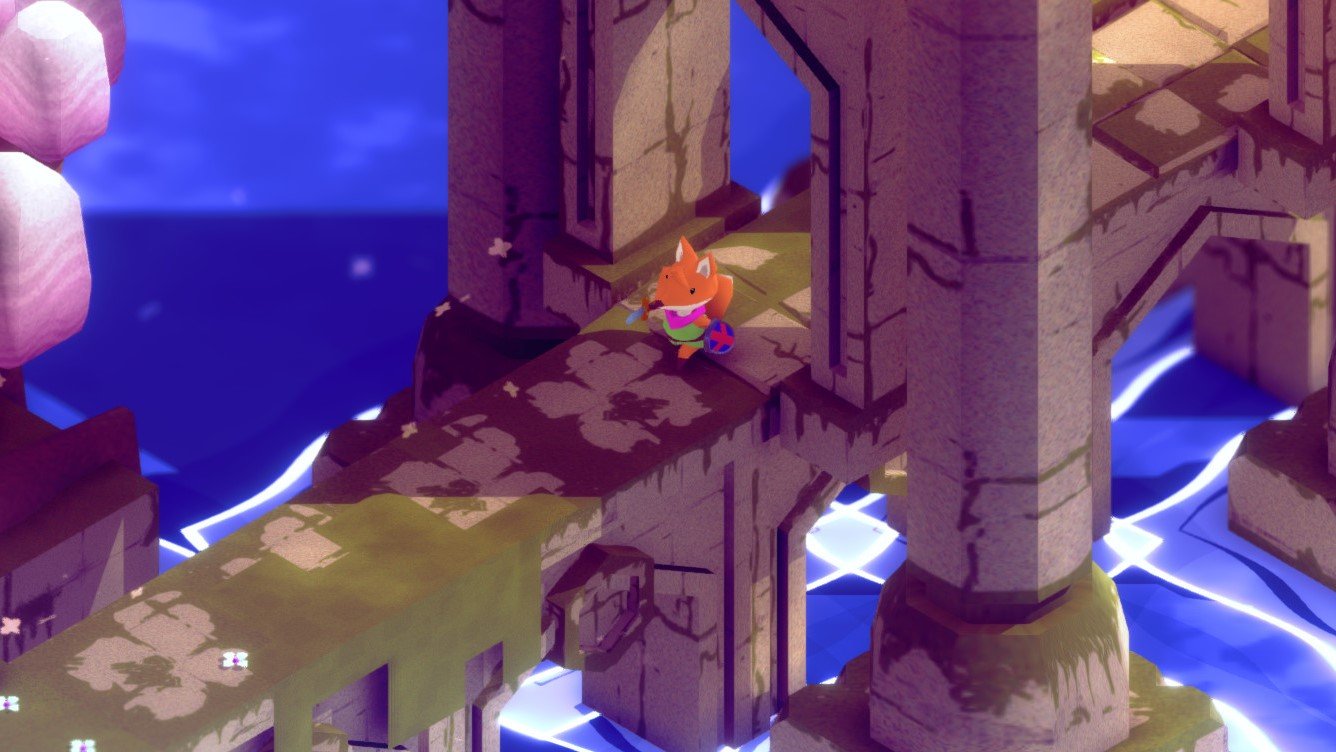 Deception is Tunic’s favorite game, so its premise is deceptively simple, too: players take on the role of an adorable little fox tasked with freeing an older, female-coded anthropomorphic animal. On his quest, the protagonist will visit temples and dungeons, uncovering ancient artifacts, finding paths to new areas, only to do it all over again. In the process, Tunic becomes a nostalgic adventure fueled by riddles and dark secrets.

Tunic wears its inspirations on its sleeve, so much so that even the looks of the main character – a sword, shield, and green tunic combo – are based on Link’s iconic set from the Legend of Zelda series. The same goes with the looks of the in-game manual and the nature-themed starting areas: green fields, dark forests, and a sunny archipelago. All are wonderfully realized and so is the entire presentation, if initially a bit derivative, showing more originality only in the second half. But looks are about where the Zelda inspirations end.

Gameplay-wise, the combat is much more punishing and a tad more technical than anything out of a mainline Nintendo series. There are hidden inputs for your attacks and items that can combo for devastating effects. Enemies can be staggered if they receive enough damage in a short time, while the main character’s stamina can run out and leave him defenseless.

It could get even more complicated, but only if you care to experiment: most of the techniques named here are actually secret! They are described in detail by the in-game manual, sure, but that manual is only available in a gibberish fantasy language.

A World of Secrets

What sets Tunic apart from other cartoony action-adventure titles is the unending barrage of secrets. Oh, so many secrets! The simplest (and most plentiful) are always pleasant to come about, while the more obscure ones always offer incredible rewards. Even shortcuts are occasionally just secret alternate routes that are simple to take one way, but have their other exit obscured by the camera.

In what is perhaps the boldest design choice in Tunic, it’s not just collectibles and money that are hidden away from the beaten path, but unique items and the essentials for progression: the stuff that would usually fill the unmissable large chest at the end of the dungeon. This design choice risks causing some frustration, but it is a risk worth taking. The willingness to require serious secret hunting even just to complete the normal ending is what turns Tunic from a Zelda clone with lots of secrets to a one-of-a-kind adventure.

Still, it’s the last couple riddles that take the cake: tough enough that they take the entire game to solve, they hide the greatest rewards of all. Solving these puzzles ties every open thread and opens the path for an alternate ending, but the real prize is the satisfaction of cracking this code. Those are genuine riddles, reminiscent of what awaits players at the end of Fez or The Witness, and the sheer time it takes to crack them puts them on the same page as one of the game’s dungeons.

Those final puzzles have a structure to them unlike any other secret in the game, a tremendous build-up culminating in a sustained stream of energy, instead of the usual fizzle of excitement. Not only are they a real challenge but they recontextualize the whole game, both once they’re solved and as you work towards a solution. Finishing the game without them feels like boiling only half of your eggs.

A World of Darkness

Reinforcing this theme of Tunic’s deceiving nature are the forces that lie just under the surface: below this world of bright-eyed heroes boils a rotten core. This is no great late-game revelation, either: the veil does not take long to come off, and the feeling that something isn’t quite right in this world is there from the start. Still, the full depth of this rabbit hole takes time to come into view. In sharp contrast to the comforting reimagining of 2D Zelda games of the overworld, what lies hidden in its cracks is alien and unknowable.

The corruption does not seem to belong in this world, as if it existed on a higher level than the digital simulation surrounding it. The game gives constant reminders of this disconnect: passing by areas polluted by a purple liquid smears the image on the screen, UI included, like a magnet on a CRT monitor; the speakers crumble under the scream of the monoliths, a power that seems to shake the earth but is not heard by the game itself. It does not belong here.

This underworld feels so out of place compared to the cheerful protagonist that making the two fight feels like moving against the game itself. What lends those feelings real power is the ever present in-game manual: when this leaflet is opened the camera moves backwards, seemingly coming out of the game. What it reveals is mostly hidden by the manual itself, stuck in the centre of the screen, but behind it is the faint image of a CRT television, displaying Tunic, paused.

This revelation, minutes from the start of the game, brings the riddles and the darkness of Tunic into a whole of indistinguishable parts: is the in-game language really fantasy gibberish, or is it just a language the kid holding the manual can’t read? How much of the “alien” part of the game is truly not for your eyes? Is it even really part of the “in-game” game?

A World to Discover

The answers the game gives can only say so much, but the unsolved questions make both worlds feel part of a cohesive whole, alien and beautiful. The riddles now feel like the stuff of legends, encompassing 3 levels of reality: the in-game, the out-game, and the physical reality of the player’s desk, full of scribbled paper notes. Deducing secret mechanics from the uncollaborative manual still feels like conquering the game yourself, but without having to randomly happen upon hidden features.

With confident gameplay and a story as cryptic as it is wondrous, Tunic is sure to keep players engaged well after finding the first ending. The New Game Plus mode seems to be built accordingly, and so are the nests of secret within secrets that will keep the community cataloguing for quite a while.

It should be noted that Tunic’s accessibility features are sadly unlike to satisfy each player’s needs. The ability to reduce screen shake, motion blur, and bright flashes is certainly welcome, but there is certainly space for improvements. An especially painful omission is high contrast mode, one that risks making the late game riddles all but impossible for colorblind or low vision players.

If you’re in the market for a classic but challenging action-adventure title, get Tunic. If you liked uncovering the obscure lore in the Souls series or if you loved the code cracking gameplay of Fez, get Tunic. If you want to treat yourself with perfectly smooth controls and an astounding presentation, get Tunic. Challenging but fair, obscure but conquerable, always welcoming. There is no one Tunic isn’t for.