Whether you buy your games off a store shelf, or on one of the many online marketplaces available to us, before you make your purchase you’ll see a piece of art that a developer has chosen to represent their product. Sometimes box arts are perfect representations of the game they embody, sometimes they’re blatant lies, and most of the time they are somewhere in-between. Some box arts will shy customers away from a great game, and others will persuade unknowing shoppers into buying a poor product. At the end of day you should never judge a game by its cover, but it’s perfectly fine to judge the cover itself.

It can be easy to dismiss a lot of Japanese box arts, since they tend to blend together with similar art styles and group shots, but Tokyo Mirage Sessions sets itself apart with its neon imbued color palette and a distinct sense of style. The box art paints an accurate vision of the game itself, as the beautiful yellows, greens, and blues seen on the box are all prevalent within the Shin Megami Tensei  / Fire Emblem mash-up. The vibrancy of the image is what catches your eye, but one can’t help but also appreciate the excellent composition, with characters lined up diagonally (matched by the diagonal slant on the logo), blending together seamlessly while simultaneously covering a wide gamut of emotion through varying facial expression and body language. 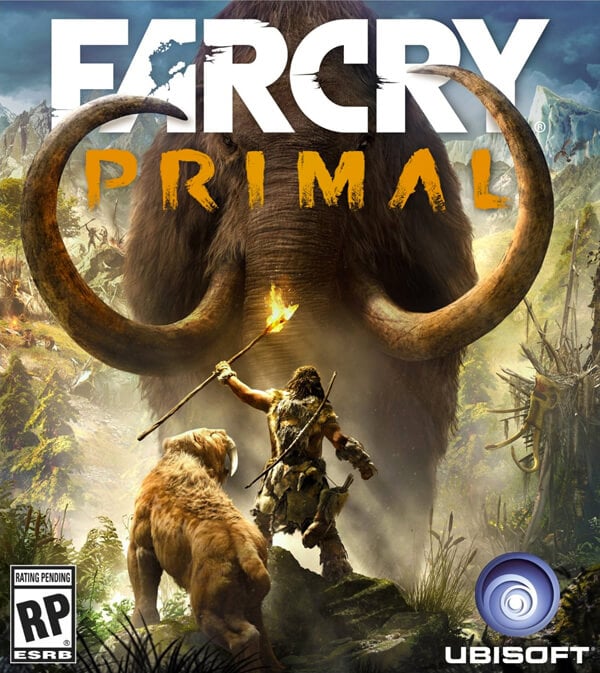 Today the largest land based animal roaming the planet is the elephant, but several thousand years ago it was their ancestor, the mammoth, that towered over our predecessors. The cover arts of both Far Cry 3 and 4 featured the games’ respective antagonists, and it’s by no means a coincidence that Primal’s art features this towering beast. The mammoth on the cover isn’t actually the game’s primary villain, but rather a symbol of how the prehistoric landscape and it’s primitive inhabitants will prove to be the game’s largest trial. The mammoth’s tusks surround the word “Primal” while overlapping the words “Far Cry”, hinting at how the dangers of the game’s world will attempt to surround and suffocate the game’s protagonist. Speaking of our hero, he can be seen standing and raising a spear in defiance at the mammoth’s feet. The tip of his spear is lit ablaze, hinting at the importance of fire in the game’s campaign, and the trusty saber-toothed feline by his side indicates that wildlife won’t just be foe, but friend as well. While the central figures in the image are the main draw, there are key tidbits in the background–like rival tribesmen and snowy peaks–which give hints towards other things the game has in store.

Subtle, serene, and simple, The Witness’ key piece of promotional art is a perfect window into Jonathan Blow’s puzzle extravaganza. The aerial view paints an image where sky, ocean, and sand blend together seamlessly as if one layer, but much like the game’s puzzles, a change in perspective can make a world of difference. The world of The Witness is expertly crafted, with nearly each and every pixel having a purpose, some being obvious while others are rather obscure. Often a simple change in your point of view can lead to a breakthrough in The Witness, and this gorgeous cover art is a hint at that, even if you don’t know it yet. 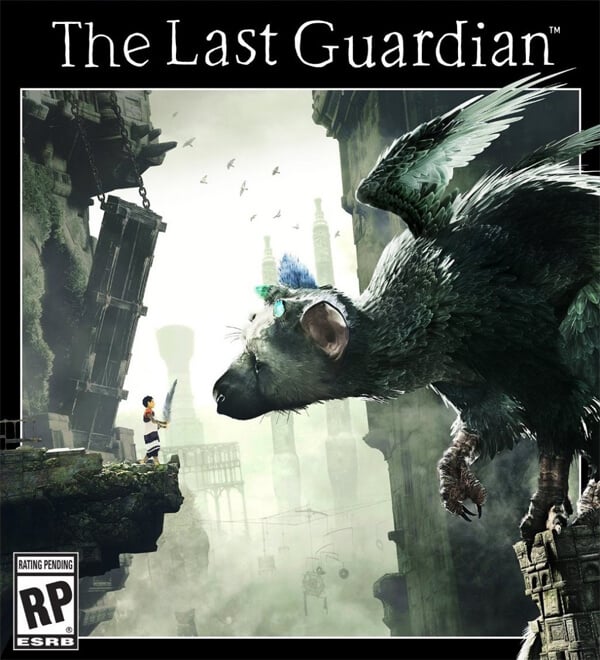 The Last Guardian’s cover features a black frame surrounding a central image, but the key aspect of the art is how the platforms that the two characters are standing on each protrude past the frame, one from each side of the image, alluding to how the game’s protagonists come from two very different walks of life, but meet in the center for a brief moment in time to form an unlikely but everlasting bond. A beautiful cover representing a beautiful game. 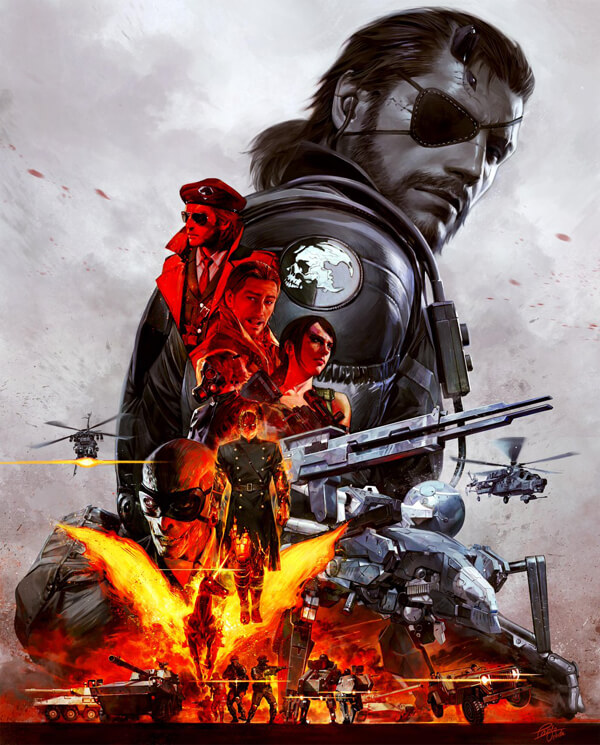 MGSV is still a sore point for me, and 2016’s “Definitive Experience” edition of the game (which contains The Phantom Pain, Metal Gear Online, Ground Zeroes, plus all their respective DLC) has done little to heal the wound left by Konami’s carelessness. The game is still incomplete (which makes the “definitive” moniker almost insulting), and forever will be since Hideo Kojima was torn away from the series, but at least Konami got one thing right with this re-release–what a spectacular box art. Evoking a classic style seen in age old movie posters like those of the original Star Wars series, this art wows with a beautiful depiction of the game’s cast which escalates in importance from the bottom upwards, culminating with Big Boss himself taking up the majority of the image. The beautiful tones of red and orange catch the eye and highlight the game’s secondary characters, while Big Boss and the Sahelanthropus stand apart, both depicted in grey, hinting at the almost symbiotic relationship shared between Jack, his descendants, and the mechanical menaces known as Metal Gears. 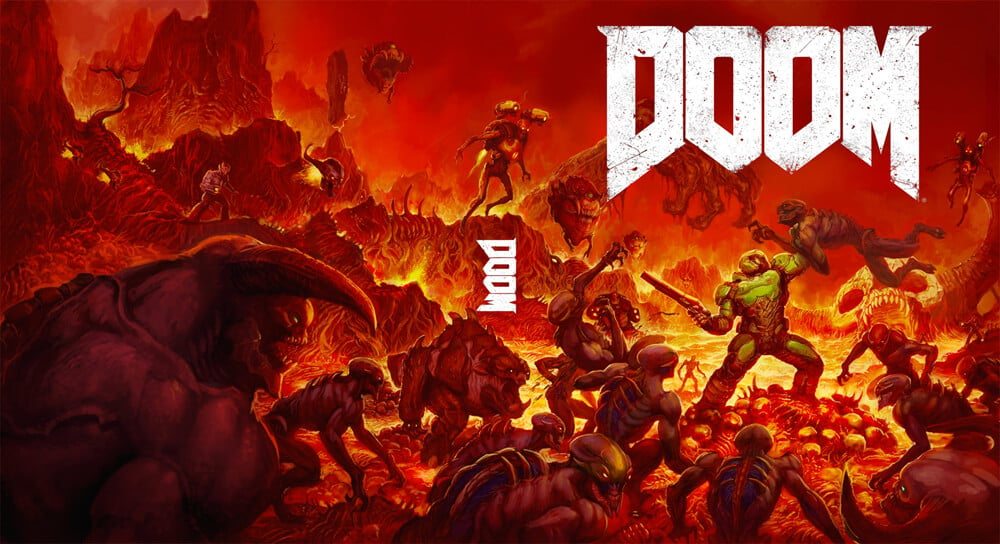 At this point in time we can look back at 2016’s DOOM as both a successful resurgence of one of gaming’s most legendary franchises and as one of the year’s better overall games, but there was a point when all the writing on the wall indicated that something was amiss with id Software’s revival project. Numerous delays, a name change, an extremely lackluster multiplayer beta, and the news that Bethesda wouldn’t be sending out advanced copies for review were just a few indicators that pointed towards an eventual disappointment. With tensions mounting and fans’ frustrations ready to boil over, it was the reveal of DOOM’s official box art that broke the proverbial camel’s back. Let’s be honest here: DOOM’s primary box art just sucks. Featuring what looks like a reject from Halo’s SPARTAN program, the game’s cover is boring and bland, failing to capture the ostentatious essence the series is known for. With seemingly nothing but bad news surrounding the game, the uninspiring box art was a tipping point that led to a fan outcry, but in a somewhat surprising move Bethesda actually listened, and reacted by putting a poll on Twitter allowing fans to vote for the game’s reversible alternate cover. The eventual winner not only trumps the game’s primary cover, but also stands tall as 2016’s best box art.

The cover pays obvious homage to 1993’s Doom, with our unnamed space marine, surrounded by hellfire and brimstone, standing tall amidst a seemingly endless swarm of demons. Within the first few moments of playing DOOM the player quickly comes to realize that it’s the forces of Hell that should be afraid, and the mounting pile of skulls at the marine’s feet are a perfect reflection of that. The classic Super Shotgun held in one hand indicates that the game will be sticking to its roots in terms of weaponry and style, while the way the marine is grasping a demon by the throat with his other hand hints at the game’s glory kills system. The art features a wide variety of demonic enemies, simultaneously giving a taste of what’s to come while also hitting long time fans with some heavy nostalgia—plus the giant hand coming over the horizon is just a tad ominous.  The art’s color palette seals the deal–beautiful and varying tones of red with some sprinklings of yellow and orange–never has Hell looked so eye-catchingly gorgeous.