In Japan, the Monster Hunter series is something of a legend. Every gamer worth their salt in Japan knows about Monster Hunter, as each new iteration in the franchise is met with high critique and commercial success. However, this is not the case over here in the States. The first time I had ever even heard of the franchise was a preview for the series’ third installment, Monster Hunter Tri, in Nintendo Power. The idea of hunting giant beasts with an online team seemed like a really cool concept to me, especially when I learned of how well the series was received overseas. Little did I know that Tri would go on to become the single greatest experience I have ever had with an online multiplayer game.

Classic controller Pro. Keyboard. Wii Speak. Gobstoppers. Sobe Life Water. These were the tools I would use every Saturday night after the release of Monster Hunter Tri. To me, this wasn’t just playing a game; it was a weekly event. While the single-player game certainly interested me for a while, it was the robust multiplayer mode that hooked me almost immediately. This was aided by the fact that Nintendo actually allowed Capcom to include some decent modes of player communication in the multiplayer. If you didn’t have the Wii Speak microphone peripheral, you could plug a USB keyboard into the Wii and use it the same way you would in any other MMO. These additions made your teammates feel like more than just players – they felt like your fellow hunters, just as responsible for you as they were for themselves.

While there were plenty of other multiplayer games that include all of those features, there weren’t any quite like Monster Hunter (that I had played, at least). Co-op play and strategy were taken to the next level, as each hunt had to be carefully planned and carried out. Charging in guns blazing with your whole team would result in a swift failure, especially if it was a high-rank beast. The 50-minute time limit also added a serious amount of tension to each of the stronger monsters. Even though that sounds like a lot of time, there are plenty of creatures in the game that require a tremendous amount of time and effort to kill. Tracking, damaging, and subduing a gigantic beast is a euphoric feeling that is simply unmatched in terms of satisfaction. 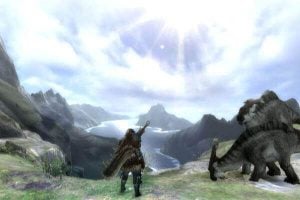 For a Wii title, Tri was gorgeous.

One of my favorite aspects of Monster Hunter Tri was the gear crafting. Armor and weapons could be crafted from materials in the environment as well as materials harvested from the monsters themselves. Seeing players walk around the main hub with armor made out of some of the hardest monsters in the game was surreal. To me, they seemed like legends. They had completed missions I would never even have the opportunity to attempt, let alone complete. Some of these players actually took the time to help me with mediocre-level monsters that I was struggling with. Embarking on a hunt with these guys was always a weird feeling, almost like I was a kid watching an adult show me how to do something. Regardless of that feeling, it was an amazing way to learn the more advanced strategies that later missions would demand.

There is one hunt in particular that I still think of with reverence. I was looking for three other hunters to help me take down a Uragaan for the first time. This was one of my first steps into the late-game world of Monster Hunter Tri. This would not be an easy mission, so finding the right team was essential if I wanted any chance of defeating this thing on my first try. Finding three other players was easy for a popular mission like this, and my team looked stacked. Two of the players had an extremely high hunter rank, which was very comforting. Killing a Uragaan was probably as easy as repeating the third grade to them, so I had no qualms with letting them lead the charge. The other player was not only a lower-rank like I was, but it was also his first time attempting this mission. I quickly realized that the two advanced players were going to be the key to completion.

I really had no idea what I was doing as we entered the hunting area, so I just followed the two advanced players like a lost puppy. It took us about two minutes to find the Uragaan, and it was even more massive than I had imagined. Its size was matched only by its defenses, as half of my hammer swings literally bounced off of its stone-covered back. Luckily, we had the two legends to carry us through the fight. As long as the other weaker player and I focused on simply staying alive, we would walk away with some brand new gear made from fresh Uragaan parts. However, things were about to take a drastic turn for the worst. 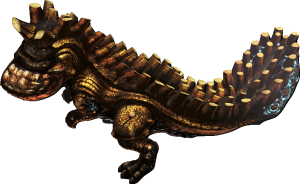 The Uragaan, in all its glory.

15 minutes into the hunt, the two advanced players dropped out. Was it a bad connection? Did they have something else to do? Was this on purpose? Whatever the reason, I was left with a teammate that was as equally clueless as I was. Bringing this thing down on our own seemed like an impossible task, but it was one we felt was worth attempting. We quickly learned that we were able to start slowly accruing some damage by focusing the Uragaan’s underbelly (the only area not covered in stone and metal). However, without the other two players to catch its attention, we quickly lost our first life. Two more left.

40 minutes into the fight, we started to realize that we were running low on resources. Health potions and whetstone supplies were running thin. The Uragaan had been limping for around five minutes, which was a great sign, but that also meant that we would have to endure its “rage mode.” When a monster is on its last legs, it will put everything it has into one last attempt at the player’s life. This comes in the form of a serious boost in speed and damage. With five minutes left on the timer, the beast entered rage mode and destroyed me in three hits, taking another life. One left.

The last few minutes of the hunt were pretty surreal to me. Each attack felt like a futile desperation attempt, and with no health bar to monitor, we had no idea whether or not we could muster up enough damage to bring the Uragaan down. With less than two minutes left, we decided to just go for broke and attack the monster with reckless abandon. I was knocked away at the 30-second mark, and as I stood up, I saw my teammate bring the seemingly invincible monster to its knees. We had done it; we had beaten this thing together.

It took a few seconds for it to sink in. When I realized what had happened, I just yelled as loud as possibly could. I wanted to hug my fellow hunter, and even though I had never actually met him, I felt like he was a friend. After harvesting what we could from the Uragaan, we congratulated each other and headed back to the tavern. 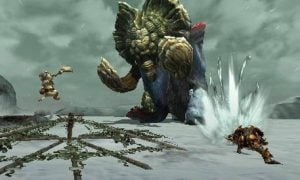 Generations packs an overwhelming amount of content into a 3DS cart!

Moments like this made Monster Hunter Tri the best online multiplayer game I have ever played. I spent over 500 hours within its world, and I’m sure I would have spent 500 more if I was good enough to reach the game’s end level quests. Hunting alone was fun, but hunting with a full team was simply amazing. Here’s to hoping Capcom brings the series back to the big screen on the Switch, but until then, we will have to take the hunt on the go with Monster Hunter X: Generations. I encourage anyone interested in the series to give the newest game a try; while it didn’t grab me nearly as much as Tri did, it’s still an amazing title that does an excellent job introducing new players to the game. It’s one of Capcom’s best franchises and deserves the same amount of praise in the west as it’s given in Japan.