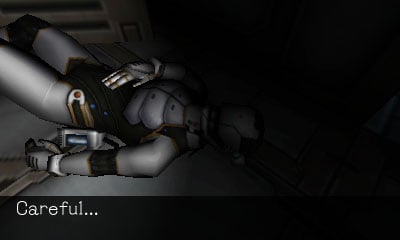 Horror on portable consoles isn’t something that could be described as “commonplace”. In fact, portable titles that attempt to scare the player are almost unheard of. Often times, the few games in the horror genre to grace a portable platform such as Nintendo’s DS are met with average reviews, and fail to make an impact with players. However, Level-5 have released a game that actually succeeds where many horror titles fail to deliver- scares, story, and genuine atmosphere. And while The Starship Damrey is an adventure/horror game that doesn’t necessarily revolutionize any aspect of the genre with its bite-sized length, what it does do, it does very well.

The story of The Starship Damrey is vague – and purposefully so. In fact, the game opens up with text that reads, “This game contains no tutorials or explanations. Part of the experience is to discover things yourself”. The story takes place in, as the title suggests, a starship, which is named Damrey. But this is the only real exposition that the player is given – the title alone. The plotline of the game is left to the player to be figured out. It’s obvious that something has happened on this ship, but we do not know what. That is the main draw of this game- the story, and figuring out what exactly occurred aboard this ship. You awaken lying down in an unknown space, with a screen in front of you. The bottom screen is seen from a first-person view. From there, the player controls various objects from the outside world through their own computer. And to go into any more detail would be spoiling the experience- this is a game meant to be played for the story. The plot is delivered through small details, such as the photograph of a woman on the bottom screen. The mystery of the story and the way it unfolds is unique and intriguing, and it will definitely hold your attention until the very end. 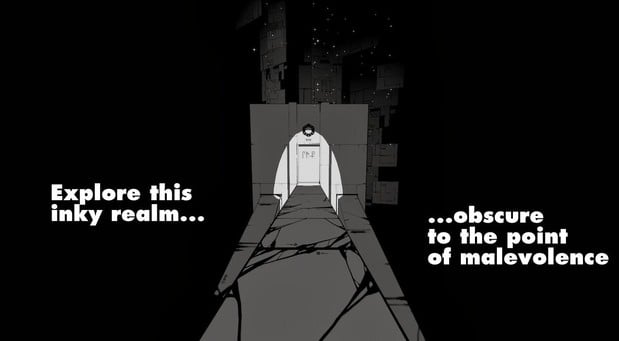 The main gameplay mechanic is the act of controlling various small robots as you navigate the dark hallways of the starship. From where the player lies, there is a screen that the player can touch to control a rover-type robot. Much of the gameplay is performed through the first-person view of this robot, and the actual player themselves remains in the area on the bottom screen. The bottom screen is utilized as the view of the player in the containment unit, where you control outside robots and perform various other technological actions, such as typing with a keyboard, while the top screen is used as the view of whatever robot you are currently controlling. The bottom screen serves as a constant reminder of where the player actually is, in an unknown space, and it gives a constant sense of claustrophobia. It’s a well-implemented system, one that allows full immersion of the player, and a great example of a type of immersion that could only be done through video games, particularly with the dual screens of the 3DS. And immersion is one of the game’s greatest strengths- the ability to make the player fear the unknown as they explore this ship. The majority of the gameplay takes place through the controlling of a robot, where the player will view the ship through the robot’s camera, and solve puzzles and interact with the environment. The starship is somewhat maze-like, and a few puzzles will require some serious thought to solve, although the puzzles never become so demanding as to detract from the rest of the experience. The Starship Damrey is a game of exploration and immersion, first and foremost.

Speaking of immersion, does this game have that down to a science. There is rarely any actual music to speak of in this game, but rather, the audio design lies within effectively utilizing the sounds happening within the ship, and that’s it. The ship has an ominous silence to it, and often, the only sound that will be heard is the humming motor of the robot that the player is controlling. If the player is not moving, then silence will permeate the area. It gives an extremely effective feeling of loneliness and isolation. In The Starship Damrey’s case, less truly is more. There is no soundtrack to speak of in this game, in the traditional sense of music; but rather, the player is given scarce, metallic sounds of the starship and the robotic monotone speaking voice of a computer.

Visually, The Starship Damrey isn’t anything to write home about but is certainly not hard to look at. The graphics are comprised of 3D environments that look nice but lack any strong detail. However, this can be seen as something that works in the game’s favor. It is visually comparable to a Gamecube title. Which is to say the visuals are good, but not necessarily astounding in any way. Although the ship is scattered with colors of gray and blue, the monotony and drabness of the game adds to the overall mood. The lighting from the robot’s flashlight looks impressively realistic as well, which is important because this is a very dark game. Many of the areas of the ship lack light of any kind, and the flashlight is very helpful in guiding the way.

Of course, seeing as this is marketed as a horror game, a big question to many gamers will be: is this game scary? And my answer to this would be yes. However, this is only if the player allows themselves to be immersed in the game world. Throughout the game, there is a constant sense of dread and fear of the unknown. Just like the vagueness of the story, there is no real way of knowing what you will encounter, or what may lie ahead of you in a dark corridor. Nothing but complete silence and a few creepy audio cues are often more than enough to ratchet up the tension. On top of this, there are a few well-implemented jump scares throughout the game that can seriously catch the player off guard. An interesting aspect of this game that is worth noting is that the player is never truly in danger at any point of the game- there is no method of attack, a health bar, or even a way to “die”. This is a game about exploring, and not fighting. This may be a turn-off to some players who see this as a detriment to a horror game, and need some sort of edge to their gameplay. And while this lack of real “danger” may be true, the game still manages to deliver a solidly creepy experience from its strong sense of atmosphere alone. And that’s what this game is all about- atmosphere.

The less you know about The Starship Damrey before going into it, the better. Without spoiling anything, I can definitely say that it remains intriguing throughout its short runtime, and has a satisfying ending that you will not see coming. It is not a lengthy experience- in fact, the entire playthrough will last you 3-5 hours, depending on how much time is spent solving puzzles and exploring the ship. But, it is a game that remains entertaining from the moment it begins and is well worth its $7.99 asking price. The Starship Damrey has become one of my personal favorite 3DS games of all time, simply for how unique it was and the mark the experience left on me, even with such a short runtime. If you do decide to purchase this game, I recommend playing alone, in the dark, and with the volume all the way up. You’ll be in for a great experience. However, this is not an action game of any sort, and anyone going into this looking for that will be severely disappointed. Many will be turned off by its slow pace and minimalist storytelling. It is a niche game for a niche crowd of gamers. But, those who appreciate narrative and atmosphere in their games are in for a real treat. If you fall into the latter category, do yourself a favor and hop on the Nintendo eShop and download this game. Regardless of which group you fall into, The Starship Damrey is an undeniably unique experience that should not go unnoticed.