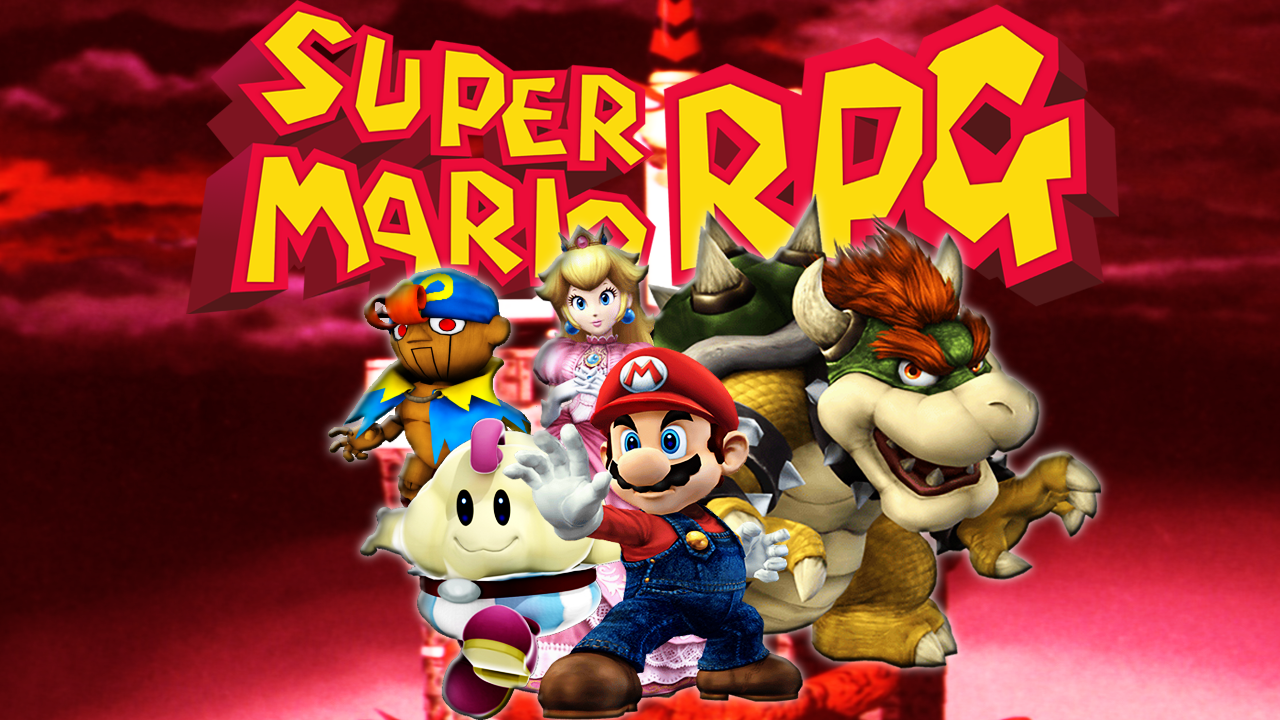 Is there anything that Mario can’t do? Nintendo has placed the iconic plumber in as many professions as the Japanese publisher has deemed marketable to a mass consumer base. He’s been a race car driver, referee, golfer, and even a giant gorilla tamer. Obviously, Mario can do anything if he sets his mind to it; a true renaissance man.

Much like Mario himself, his series has become rather versatile over time. Starting off as a simple 2D platforming game it soon evolved and spread itself into multiple genres such as side-scrollers, kart racers and sports.  But none was quite so much a leap as Nintendo’s ambitious venture into the RPG realm with 1996’s Super Mario RPG: Legend of the Seven Stars.

Super Mario RPG begins with the tired old premise of Mario learning that Princess Peach (Toadstool, in game) had been kidnapped. Knowing the routine, Mario heads straight for Bowser’s castle. As the two adversaries prepare for battle, a giant sword falls from the sky and stabs through the castle. It is none other than Exor, a giant sentient sword controlled by the evil Smithy and his gang of living, breathing weapons. 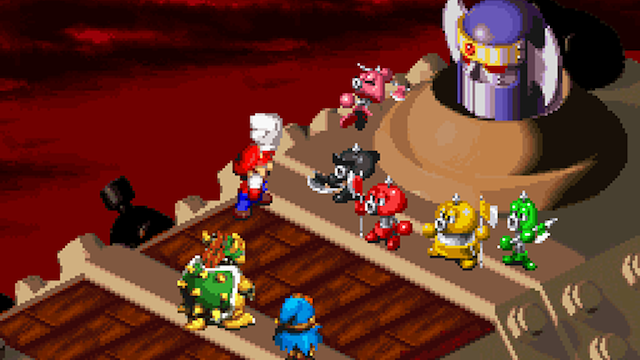 The story immediately becomes much more dire than any other tale that the Mario games have presented since. The well-being of the world is at stake this time, a consequence that has never been bestowed upon the Mushroom Kingdom to this degree. Mario heads off on his most intricate adventure to date to stop a menace with which Mario has ever fought.

This is the first time the developers have implemented a deeper sort of characterization for any of these beloved Nintendo heroes. Mario, one of the world’s most recognizable fictional characters, is given some humorous characteristics and animated gestures that haven’t been displayed in any Mario game prior. Peach this time around is more than just a damsel in distress. She stands tall and proud with Mario ready to fight for her life and her kingdom with her handy parasols, frying pans and healing spells. Even Bowser is given a heroic reimagining. I know, Bowser as a good guy? Unheard of! When Bowser joins Mario’s side and actually seems like a decent guy compared to the main villains, you know that what’s at stake is something to be taken very seriously.

Super Mario RPG also introduces a few more memorable characters who would remain cult favorites to fans. Mallow, the little puffy cloud man who thinks he’s a frog, is as brave as he is naive but gives off a cute sort of welcoming vibe. And Geno, the puppet warrior, is wise and confident in his technique but just as amiable to his allies. Unfortunately, not much has been done with these characters for the 20 years since the game released to many fans’ dismay. After all how many fake pictures have we seen ofSuper Smash Bros with Geno as a newcomer? Whether the Square deal with Nintendo does not allow for easy access to these characters or Nintendo sees no benefit in developing these characters further, at least they’ll live perfectly preserved in Super Mario RPG for fans to go back and enjoy.

The gameplay is unique and a foreteller for many things to come in the series.  Exploration is done by controlling Mario in eight directions in a seemingly 3D world. Keep in mind, Super Mario RPG precedes the release of the 3D gaming milestone,Super Mario 64, by a mere three months. Mario is still able to jump on platforms and pound against ‘?’ blocks to receive coins. While definitely primitive and finicky in its control, the game does its job to give the player a Mario-esque twist to RPG exploration. 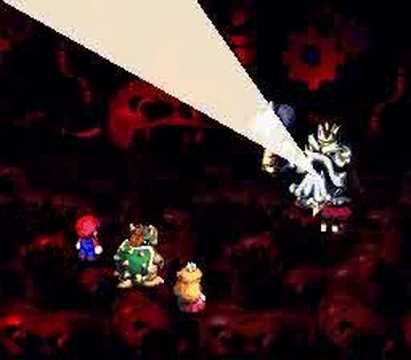 The battle system resembles the turn-based style represented in many Final Fantasytitles. Each character on the battlefield takes turns doing an attack. Of course, Nintendo had to inject a little of that classic Mario charm even in combat. With timed button presses as enemies attack, the damage taken can be reduced. Likewise when the team is attacking, timed button presses can increase damage or even allow for consecutive attacks. So it isn’t just a sit and wait game on the part of the player. They can actually participate in the animations themselves. This mechanic would be built upon greatly with the Mario & Luigi series which would debut seven years later.

In fact, Super Mario RPG would be succeeded by the  both the Mario & Luigi and Paper Mario series of RPG games. They do their best to stay true to the adventure-styled RPG elements and comical dialogue first introduced by Super Mario RPG.

Yoko Shimomura was brought on to compose the game’s memorably whimsical soundtrack. Perhaps the most notable of all the songs would be Forest Maze, in fact, the song was originally intended to be in Super Smash Bros. Brawl. Shimomura is most remembered for her work on the Xenoblade and Kingdom Hearts series but she continues to compose the soundtracks for the Mario & Luigi games to this day.

Prior to Super Mario RPG, it was nearly impossible to think of a long-form Mario adventure at least to the extent of what this game ended up giving fans. Fans had grown accustomed to Mario lacking any sort of deep story-telling. It’s not that theSuper Mario Bros games needed a story at all, it was all about the platforming after all. But it was certainly brave of Nintendo to take their most prized franchise and expand upon it, taking it into uncharted waters both narratively and mechanically. It was certainly a milestone for Nintendo and showed how daring they were willing to become with their most respected and beloved franchise–and it couldn’t have turned out better. 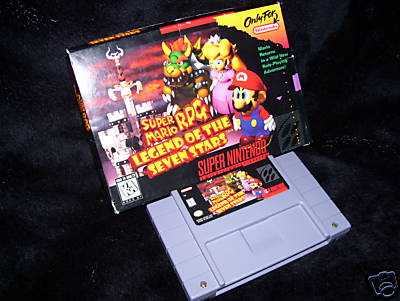