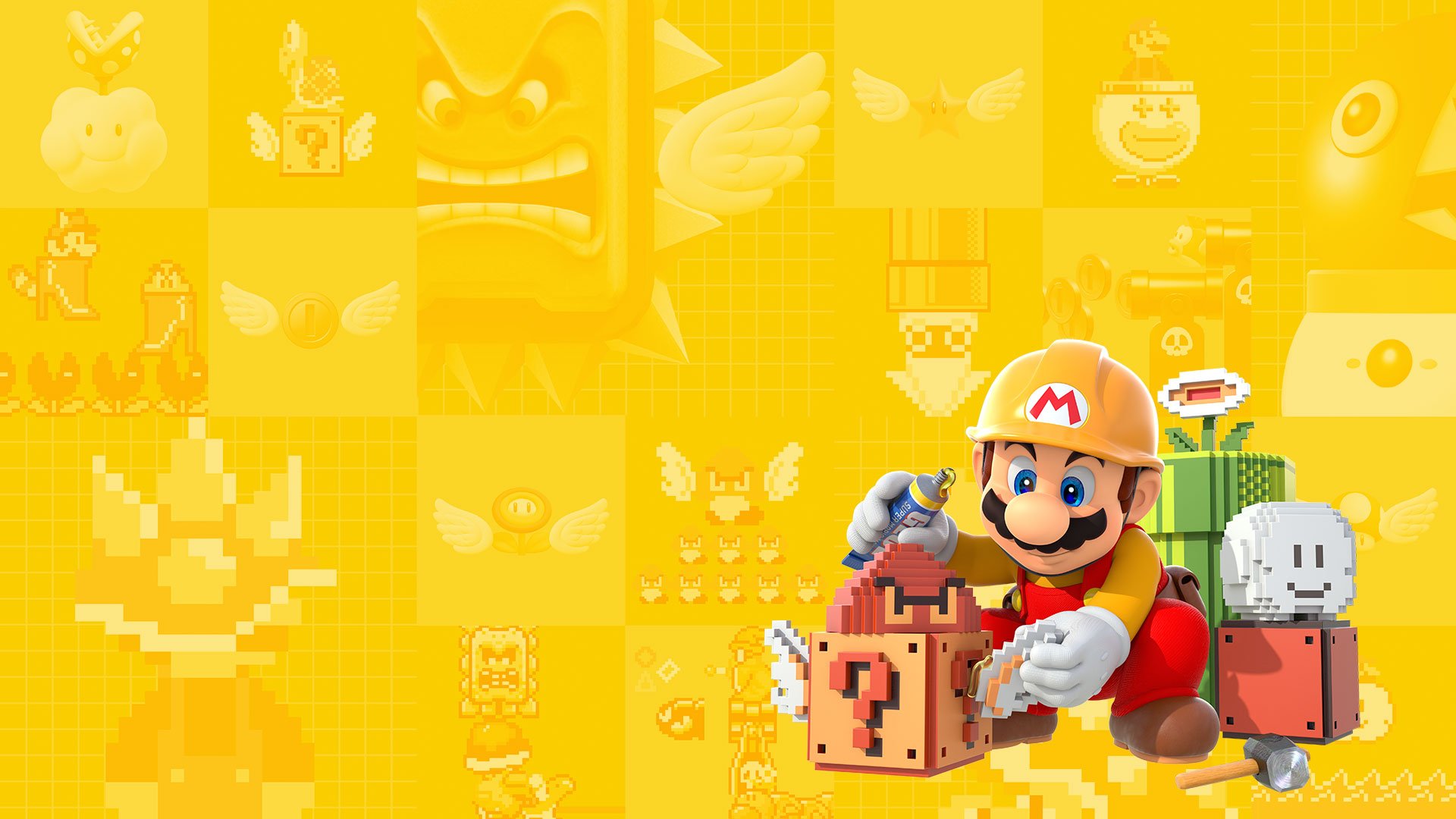 Chances are, you’ve heard of Super Mario Maker by now, and you all have a pretty good understanding of what the game is all about. When handing over the keys to their magical Kingdom, Nintendo wisely took its time to make sure it got everything right – and they did. They also did an incredible job in marketing this game, going so far as to bringing back the Nintendo World Championship and launching a ludicrous marketing campaign that includes everything from a series of creative commercials, a new WiiU bundle, and an assortment of videos to give us an idea of what we could expect. Super Mario Maker is the fun, brilliant level editor Nintendo promised us last year, and so much more.

As the name might suggest, the game allows players to make their own Super Mario Bros. levels—specifically, levels that fit within the aesthetics of four games in the series: Super Mario Bros., Super Mario Bros. 3, Super Mario World, and the recent New Super Mario Bros. series. Players can lay out every brick, tile, power-up, enemy, and warp pipe, and design levels in the style of each of the four Mario generations represented. Of course, everything still has to play by the rules of the Mario universe and nearly every component from the four franchise entries are present in Mario Maker’s creation mode. If you’ve seen it in one of those games, chances are you can add it to your creation via a user-friendly interface. If you want to make an enemy fly – or if you want to hide power-ups in bricks, you can. All you need to do is drag and drop these features from the editor’s menu. It’s as simple as that. There are of course rules and limitations. In other words, don’t expect to be able to add weapons, enemies or vehicles not found in the Super Mario universe — and don’t expect to be able to create a turn-based Mario RPG. And even within each generation of Mario gameplay, you are still restricted from using features found in other games: For example, while New Super Mario Bros. levels do support techniques like ground-pounds and wall-jumps, the original 8-bit look doesn’t allow for these specific features.

Perhaps my favourite component is the Mystery Mushroom which allows Mario to take the form of characters from other games such as Splatoon, Animal Crossing, The Legend of Zelda, Donkey Kong, Sonic, and many more. There are an incredible 100 unique costumes and most are easily unlockable with amiibo. The new Anniversary 8-bit Mario amiibo will support super-sized characters while other existing figures from Nintendo’s intensely popular series of figurines are also largely supported. Scanning a toy brings the icon onto the screen and replaces Mario with a different little sprite. While in costume, you can push up on the D-pad to see an animation and hear sound effects relating to that very character. But don’t worry, not every single costume is amiibo-based and you don’t need amiibo to unlock each.

A wise move on the part of Nintendo (although somewhat controversial) was the decision to not give players every tool right away. When you first load the game, Super Mario Maker only gives players the basics and requires players to spend some time building with what they have before unlocking more features. The more you play, the more you unlock. The materials are divided into themes, encouraging aspiring designers to focus on, say, building a castle before trying their hand at underwater levels or ghost houses. Set packages of level design elements are unlocked with time although the specific timing of the unlocks seems a bit random; some take only minutes while others take hours to trigger a new delivery. Regardless, the decision to speed up the process is far more welcoming than the original nine-day wait Nintendo had initially planned. Over the course of a few days, you’ll be able to play with the game’s entire suite of level-making tools which call back to decades of Super Mario platformers. The novelty of these unlimited combinations makes for quite the spectacle, which is why Super Mario Maker is timeless. So as long as there is a console that is capable of playing the game, along with online support, players can continue to discover, play and create levels forever.

Super Mario Maker is not perfect, but pretty darn close

Creating levels can be a daunting task but what helps Super Mario Maker stand apart from other games, like LittleBigPlanet, is how easy it really is. Super Mario Maker keeps things simple by removing complicated elements like logic programming and features an incredibly accessible level construction kit that the whole family can easily enjoy. The tools themselves hide an array of secrets. If you shake a green Koopa it will turn red and if you shake a Lakitu, you’ll be left with only its cloud which Mario can ride. Add a mushroom to an enemy, and it’ll grow larger and place wings on an object and it will fly. The level editor also provides information detailing everything you need to know about how it operates making it easier both for players to understand a level and designers to realize their visions. Here is a game that anyone can play and anyone can create levels no matter what their level of gaming is. And it doesn’t take much time to wrap your mind around the editing tools because most of them are extremely straightforward. The well-designed interface makes learning easy and intuitive and features smart button-based shortcuts and simple controls. More importantly, Super Mario Maker isn’t limited to just making levels for a Super Mario platformer. The tools are flexible enough so that you can personalize your creations and add music, sound effects, and text. And once you are finished you can share your creations online with a passionate community of fans around the world.

Super Mario Maker isn’t just about creating levels — the game actually has two major components. There’s the creation suite, but there is also the play hub, where you can simply enjoy Mario Maker levels made by other people. There, you will find the “10 Mario Challenge,” used to serve up sample levels that ship as a part of the package. This mode gives players ten lives and challenges them to beat eight random levels made by Nintendo designers. Once you build a level, you can save it to your system and upload it to Nintendo’s servers where you can keep track of stats and feedback via notifications. The smartest move on Nintendo’s part, however, is forcing players to complete their levels before sharing them online. In other words, you can’t upload a level which is impossible, or beyond your own skills as a player to complete. Through curated lists, you can find and play other popular levels uploaded by other users. And did I mention the game’s online functionality works extremely well. Levels load in a matter of seconds and uploading your creations takes less than a minute to do. Meanwhile, the “100 Mario Challenge” allows you to play through up to 16 user-created stages with 100 lives in a mini-campaign from the maker community. You can also choose different difficulties, and the hard mode will unlock the moment you beat the normal mode. If a level is too difficult, a player can abort and swap it for another randomly selected stage. Even better, the lowest-rated levels will slowly be removed from the system, helping you dodge any terrible creations users upload online.

The only downside to Super Mario Maker is that the game restricts you to making single levels, as opposed to allowing the creation of entire worlds or your own Super Mario game. Having one level connect to the next would have been great but, unfortunately, this is not the case — which leads me to believe that this is only the beginning of a series of games that will expand on the toolkit and offer more features with each entry. Chances are, Nintendo will soon be working on a sequel for their next console.

Since its launch in 2012, the Wii U has sold only 10 million units. Even the GameCube, Nintendo’s least successful console prior to Wii U, managed to sell more than 20 million units. Blame has been placed mostly on the console’s gamepad, which some people have described as nothing more than a gimmick. But if there is ever a reason for the gamepad to exist, Super Mario Maker is it. Without it, the game just wouldn’t be possible, and this makes me believe that Nintendo built the WiiU console with Super Mario Maker in mind.

To celebrate Super Mario’s 25th Anniversary, Nintendo released Super Mario Galaxy 2, a solid entry in the Super Mario series, but not very different than its predecessor. With the 30th Anniversary upon us, Nintendo tried something new and has given us a game that celebrates three decades of Mario in one accessible, powerful creation suite. Super Mario Maker is not perfect, but pretty darn close and the best way to celebrate Mario’s 30th birthday. With an active and passionate community, Super Mario Maker could very well be the last 2D Mario platformer we ever need. There will always be more levels to play thanks to the online creation community, and an endless pool of challenges to overcome. Nintendo has just handed over their play box and it might just be the best gift they could ever give their loyal fanbase. Whether creating, exploring, watching others play and create, or just playing other people’s levels, Super Mario Maker provides an exceptional experience while offering insight into three decades of platforming brilliance.