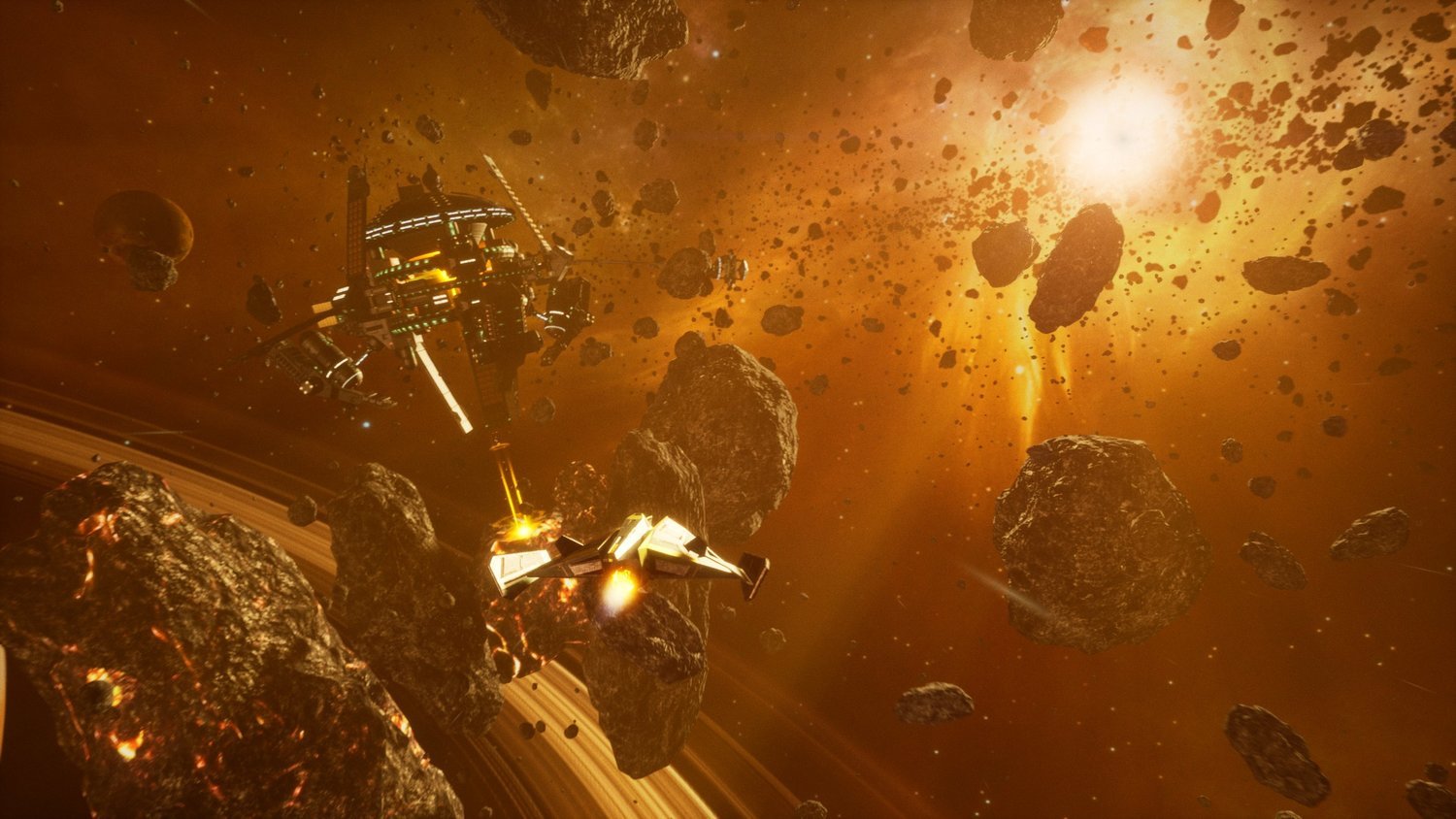 On paper, Mistfly Games‘ Subdivision Infinity DX has it all: gorgeous sci-fi environments, exciting ship-versus-ship dogfights, and varied unlockable weapons and spacecraft. But what looks like the perfect next-generation entry into the arcade-style space shooter turns out to lack the depth necessary to be a must-play. Subdivision Infinity DX is incredible to look at and has enough engaging systems to justify itself for a while, but it proves to be a middling experience overall.

This is not to say that Subdivision Infinity DX is entirely devoid of excitement. It might not be the next Star Fox or Star Wars Squadrons, but this third-person space shooter absolutely has its moments. The story is cliché — a hotshot pilot (callsign “Rebel-1”) gets caught up in machinations beyond his understanding, eventually leading to him shutting down a superweapon and maybe even saving the whole galaxy — but it is hardly the focus. Where Subdivision Infinity DX shines is in its fast-paced, brutally difficult combat and its nonlinear, meditative exploration sections.

These two concepts might feel at odds, but the way Subdivision Infinity DX is structured generally works in its favor. Every chapter of the campaign is broken up into five missions, with discreet objectives. Most of the objectives boil down to defeating every enemy in the area, usually a few waves of smaller enemies or a handful of shielded, more powerful enemy craft. Tracking small enemy ships is fairly simple, even without a minimap or radar.

Instead, players are given indicators of whether or not enemy spaceships are actually within their field of view. Ships will beeline towards the player, lasers blazing, and defeating them is as simple as lining up the aim reticule and blasting away. There are several unlockable weapons with different effects and finding a blend that works is where a lot of enjoyment can be found. Does the player go with a high-damage, low fire-rate build, or one where the weapons fire extremely rapidly but are prone to overheating?

After earning ships that have more than one weapon slot, it is even possible to mix and match weaponry for more effective dogfighting. This is crucial in later missions, even when players are on lower difficulty settings. While the first chapter or so only places the most pitiful drones against the player, everything from the third chapter and on is a genuine challenge. Barreling down on an enemy gunship and disintegrating them with superior firepower feels cool, and the pulse-pounding soundtrack adds another layer of intensity to the proceedings.

Most immediately striking about Subdivision though is how lush and gorgeous everything simply looks. This is not the pristine sci-fi universe of the Star Trek franchise; instead, unmoored mining derelicts drift from asteroid to asteroid as a ringed planet looms ahead, completely dwarfing the player’s vision. It is actually — and quite literally, awe-inspiring to see some of the environments in Subdivision Infinity DX. Each environment is utterly beautiful to look at, even though there is little reason in main campaign missions to stop and smell the space roses.

But for how beautiful it looks, Subdivision Infinity DX is often boring as it finds itself prone to tiresome missions. It’s not all dogfights and strafing runs against enemy cruisers. Just as often, the player must complete objectives that involve “scanning the environment”, which translates to flying around as a meter fills until a handful of enemies show. It is possible to put the controller down and walk away for minutes at a time during these sections.

The exploration levels are similar but are at least designed around not having any combat. In these moments, players explore asteroid fields or abandoned facilities, mining for crafting materials and searching for blueprints and gear crates to upgrade their ship. Exploration actually feels very unique in a game like this, and the mechanics could probably carry a whole version of the game without combat for players who don’t mind something slower-paced.

Players might be expecting a more action-packed game, and when it delivers those moments, Subdivision Infinity DX is an enjoyable time. For players who love taking screenshots — especially those playing on a PlayStation 5 where the game really shines in all of its beauty –, there are plenty of gorgeous environments to sink in.