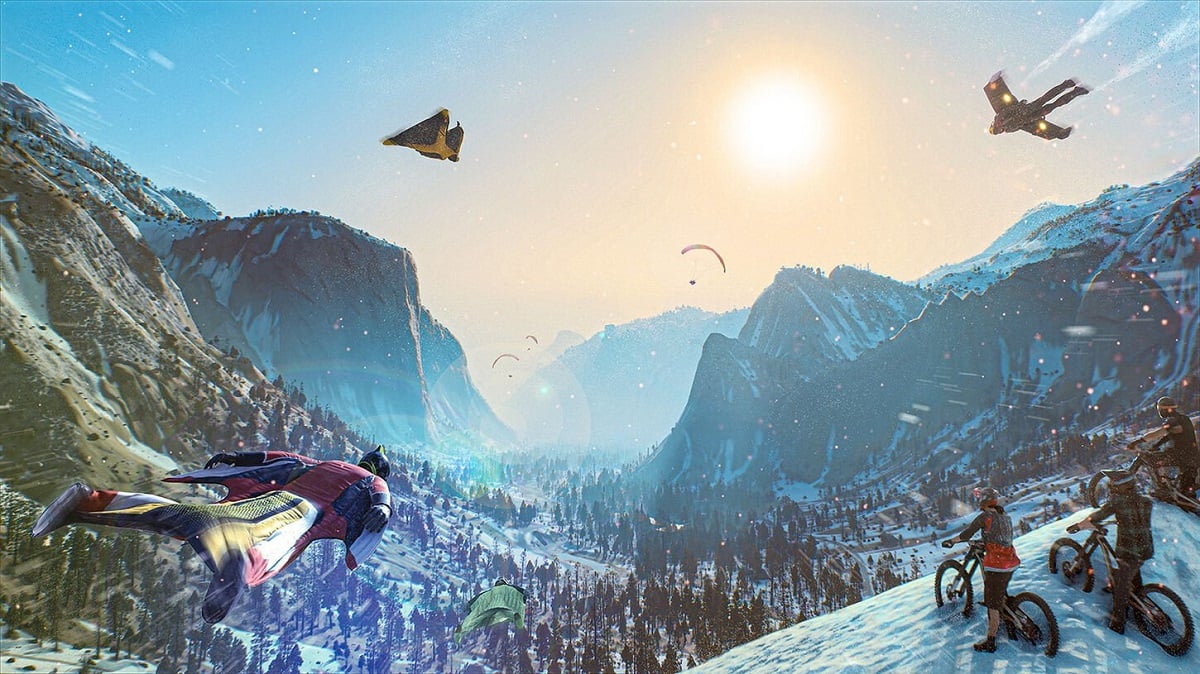 The pitch for Riders Republic is a compelling one: a diverse open world where players can shred the slopes, speed down dirt trails, and soar over canyons all in the same game. With a noticeable dearth of extreme sports titles on the market (sans skateboarding), the genre is wide open for Ubisoft to swoop in and make the snowboarding/dirt biking/high-flying super game that fans of classic EA Sports Big titles didn’t know they wanted.

Riders Republic largely delivers on that promise, offering a massive world that’s just as fun to explore as its sports are to master. It fumbles in some unnecessary ways, and there are several design decisions that don’t quite stick the landing, but it’s clear that Ubisoft learned a pleathora of lessons from its last ill-fated attempt at the genre, Steep.

It all starts at the Riders Ridge, a hub that has everything players will need when they first spawn into the game: a tutorial area to get a handle on the controls and practice tricks, quick access to online racing and trick competitions, and a shop filled with rotating items players can use to deck out their avatar (more on that later). There are a couple quality of life issues here that get more frustrating the longer one plays, like the fact that there’s no option to quick swap from one training module to another, or that accessing the online events requires players to walk their character over to a specific area instead of just selecting it from the menu. Thankfully, these are relatively minor inconveniences that should be able to be fixed with an update.

What’s not inconvenient is that at any time players can hit the Select button on their controller and zoom out to a full map littered with icons for races, trick competitions, and sponsored events that can be fast traveled to. It’s quite similar to the Forza Horizon series map; there are even points of interest and other discoverables that encourage exploration. Thankfully, Riders Republic’s fast travel is free and genuinely fast, only taking a few seconds to load in areas even on last-gen hardware like the base Xbox One. The optimization is impressive all around.

Once transported near an event, players are free to make their way over and jump in or ignore it completely and instead explore the massive biomes consisting of everything from large swaths of snowy mountains to dirt trails and deep valleys. In terms of geographical diversity and design it’s arguably Ubisoft’s most impressive world to date, and traversing it is a joy thanks to the smart decision to incorporate a separate “exploring” gear set that lets players use more unconventional means of travel like rocket skis and snowmobiles.

The Road to Glory

Events themselves are simple yet addicting. There are six sports here: snow racing, snow tricks, downhill bike racing, bike tricks, wingsuit racing, and rocket racing. These are all kept largely separate with the exception of 64-player Mass Races and special circuits. To keep players from feeling overwhelmed, Ubisoft gradually doles out new events based on how many stars they’ve accumulated. Stars can be earned by completing events, discovering landmarks, finishing tutorials, and so on, and they’re given generously enough that progression never feels gated for those keen to focus on progressing their career in a certain sport.

In solo play, you’ll face off against the ghost data of other players rather than the typical bots found in many other sports games. However, while Riders Republic features a rewind function that makes races more accessible for those as lower skill levels, the ghost data doesn’t rewind, meaning that those struggling in an event will need to restart constantly until they have a perfect run. While this is a frustrating oversight, there are nonetheless a number of difficulty and control assist options that can be tweaked at the start of every race, with higher difficulties and fewer assists offering greater bonuses (again, similar to the Forza Horizon series). The better you perform, the more XP you earn to level up each sport and get access to gear with better stats and/or different designs. It’s a compelling way to keep players coming back, especially since each event also has secondary (usually pretty difficult) challenges that award bonus stars.

While the way different sports control isn’t revolutionary like Skate or as intuitive as classics like SSX Tricky, they all still range from fun to serviceable. Downhill biking is a highlight; the sensation of speed flying down perfectly sculpted dirt paths is nothing short of thrilling, though pulling off tricks on the bike takes some getting used to. By contrast, performing tricks on snowboards and skiis feels natural and thrilling once the control scheme sinks in; unfortunately, these courses often aren’t as tightly designed.

In fact, the Tricks Battle mode (wherein teams perform tricks to rack up points and turn different parts of a snow park to their color, similar to Tony Hawk’s Graffiti mode) is one of the most enjoyable parts of Riders Republic since it’s all about pulling off as many tricks as possible in quick succession. Tricks Battle just has two downsides: there are only a meager two snow parks available at launch, and this mode isn’t playable “offline” so there’s no way to hop in and play against ghosts; waiting for matchmaking (which can take upwards of five minutes less than a week after launch) is a must. If a way to play against ghost data isn’t implemented, one of Riders Republic’s best modes may become unplayable in a few short months.

As has been the case with many of Ubisoft’s open-world titles, Riders Republic really pushes for player customization and expression. Finishing events grants varying amounts of in-game currency to spend on everything from hats and shirts to whole outfit bundles and even different emotes. Unfortunately, the prices for many of these items are outrageous compared to what a typical player may earn. The amount it takes to buy one Epic outfit is equivalent to hours upon hours of campaign progress, and with sponsor contracts (daily quests) offering a minuscule payout per every three completed, the grind is incredibly slow, especially in the late game. There’s a good chance all but the most diehard players will simply save up for one nice outfit once every few weeks instead of engaging with the shop on a regular basis, and the fact that everything can alternatively be purchased with real money–including entire outfits only available via micro transactions–doesn’t sit quite right. There are a plethora of creative customization options here, but very few players will ever get to enjoy the bulk of them.

Riders Republic is a solid foundation for Ubisoft to build on and make something truly special. Most sports control really well, and navigating the gorgeous map is way more fun that it has any right to be. It also feels rewarding to level up and earn new gear to use in new events and challenges. With that said, Ubisoft has made some head-scratching design decisions here. The rewind feature not rewinding the ghost data of competitors is baffling, as is the lack of a solo mode for Tricks Battle. Even the Creation mode feels lacking, allowing players to chart trails on the pre-existing map instead of putting a customization suite into players’ hands so they can create their own trick parks, jumps, paths, and so on like Tony Hawks Pro Skater 1+2 and Forza Horizon 5. If these issues are addressed over time then Riders Republic will truly live up to its immense potential. Still, as things stand now, it’s a fun extreme sports outing well worth the time for any fans of the genre.