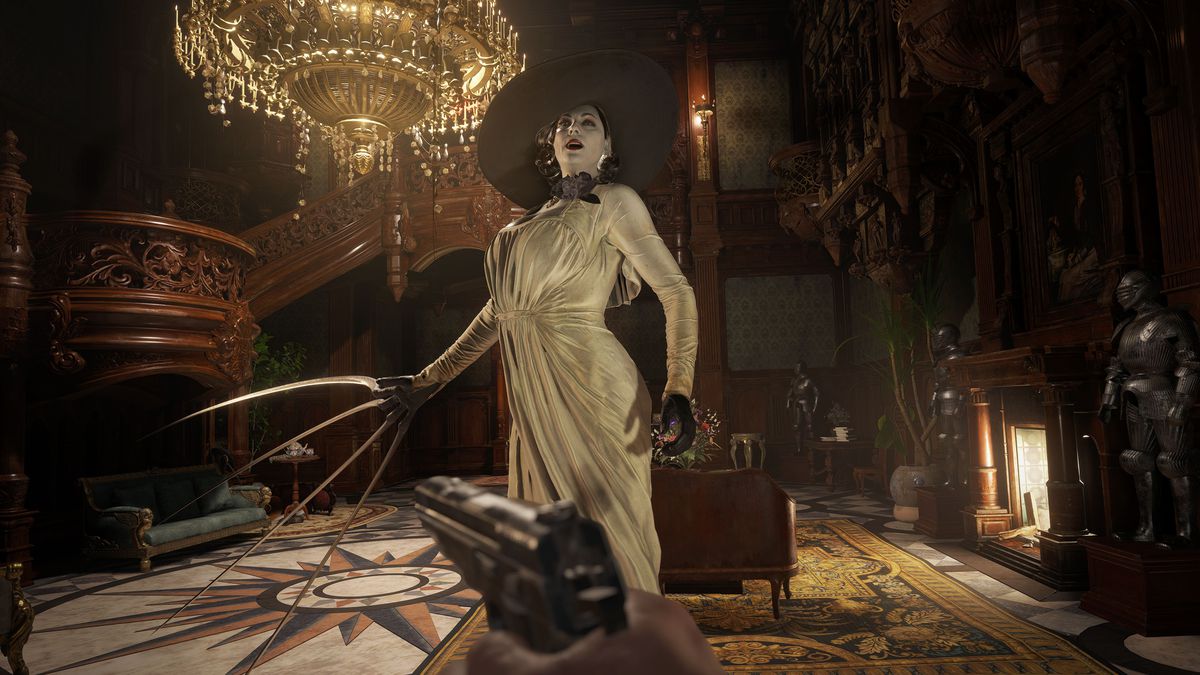 Counting Down the Boss Battles of Resident Evil Village

Boss battles have always been an intrinsic part of the Resident Evil series. From overgrown sharks and alligators to tentacle-laden, body horror monstrosities, this franchise has successfully thrived by having players wonder what sort of nasty might be around the next corner. With this spirit in mind, we’re here to rank the bosses of Resident Evil Village. You’ll find all 14 brutal encounters below; just be sure and bring a flashlight, okay?

Since this is basically just a reskin of an earlier boss fight, naturally, it sits at the bottom of our list. Urias Strajer is the only boss to appear in the Chris Redfield section of Resident Evil Village and thus cements it as one of the weakest parts of the game. Calling in air support to win the day does add a small change that sets the battle apart from the first Urias encounter, but that alone isn’t enough to bring it up from the dredges of this list.

The design for this boss is actually really cool. Too bad its location amid a bunch of 6-foot reeds makes it almost impossible to get a notion of what this creature actually looks like. Though this setting does build up the tension of the fight, allowing it to resemble an actual attack by a beast in the wild, it also makes the fight just a sort of frantic firing into the grass every time it moves.

The sheer surprise of this fight definitely is worth commending. Experienced only by players who decide to open up the Beneviento gravesite, this brute’s shocking appearance must have made at least a few hearts race among series fans. Though this is the first of the giant encounters, the second has such a creepier and more sinister atmosphere that we had to bump this one down the list.

Much of the hype for Resident Evil Village was set upon the divine Lady D and her daughters three. Though this, the first boss fight of the game, is a welcome surprise since this is also the only Junior Dimitrescu battle where Ethan doesn’t have to strategize a way to freeze his opponent; it’s naturally the least intense or tactical of the three. Just blast away until she crumples up and turns to dust, but watch out for her angry mom afterward.

Unlike the previous Dimitrescu fight, Cassandra’s encounter has an element of puzzle-solving to it. Ethan must put enough distance between himself and Cassandra to allow him to move aside a shelf unit and blow a hole in the wall. After this, it’s business as usual, but the extra steps definitely do make this fight stand out a bit more than the previous one.

The coolest of the daughter fights in Resident Evil Village takes place in a library with a skylight. Pull the switch to open it up and send Daniela hiding behind the shelves. Naturally, this also gives her a shield from your gunfire, adding an extra tactical element to the fight. Since she can also close the skylight, this adds even more strategy to this fun encounter, making it ultimately the best of the three.

As previously mentioned, this is actually the second giant fight in the game, but man, just look at the difference a great setting can make. A sense of unease that only begins with a bloodcurdling scream intensifies greatly as you come upon piles of meat and then see the giant chopping up a human body. Complete with backup from winged vampires and a boss room laced with usable traps, this fight is a literal blast—bonus points for putting three locks on the escape door.

Since Urias arrives with the first enemy encounter in Resident Evil Village, his shadow looms large over the game. When you finally get the chance to fight him, the sense of tension is palpable. Whether swinging his massive hammer in brutal strikes, leaping to smash you with it from above, or howling for reinforcements, this guy is no slouch. A very intimidating boss that can smack you down quickly if you’re not careful.

Being by far the least intimidating member of Mother Miranda’s court, players could be forgiven for not expecting much from Moreau. However, when he transforms into the massive sea monster you’ve been hearing about, your opinion of him changes in a hurry. Almost pitiful in his whiny disposition, Moreau is still a formidable (and very gross) foe. With toxic puke, huge attacks, and the ability to partially drown Ethan (a nice touch, especially from the first-person perspective), Moreau is one of the fastest and hardest bosses in Resident Evil Village.

Propeller man here might be the most batshit idea Capcom has ever come up with but damned if he isn’t a blast to fight. Having hounded the player for much of their time in the factory, this “failed experiment” by Heisenberg turns out to be his most deadly creation by a longshot. The player can only damage him by shooting him in the back, a strategy that eventually causes him to start on fire. As he tears, blasts and burns away the environment around him, Sturm will have you sweating considerably in your attempts to put him out of commission.

Welcome to the dollhouse. Resident Evil Village‘s creepiest location also features one of its best bosses. As Ethan is finally ready to leave the Beneviento Manor, he is accosted by dozens of dolls that have suddenly appeared around him. While some float or twitch, others menace him more directly. Worst of all, though, is the creepy, emaciated form of Angie, taunting Ethan with her screechy tone as she hides from him. Also, the fight ends with a fantastic twist, when Ethan realizes he’s murdered Donna rather than Angie.

Everyone’s favorite internet crush, Lady Dimitrescu, is certainly the most iconic member of Resident Evil Village‘s rogue’s gallery. The towering vampire countess stalks Ethan for much of his time in her castle, but when he stabs her with a legendary weapon, she shows her true form. Lady D, a massive dragon-like creature, tears the top of her castle apart, trying to best Ethan. Complete with a small but vital weak point, this is classic Resident Evil boss design at its best, and the fight won’t disappoint the vampire waifu’s many adoring fans.

The big bad of Resident Evil Village, Mother Miranda is the cause of every travesty and tragedy that is enacted on Ethan and the townsfolk. Once worshipped by the people of the village, she gradually used them one by one in her attempts to bring back her daughter. The final fight with her is rewarding in its spectacle, as Miranda sprouts crow wings and hides in the darkness to mask her attacks. With fire and blood Mother Miranda comes for you with everything she has and will likely take at least a few attempts to bring down for good.

Who would have thought we’d ever see a mech fight in a Resident Evil game? Suited up in a special robotic contraption built by Chris, Ethan goes heavy metal on Heisenberg in Village‘s coolest fight. As the metal man pulls together everything he can find to kill Ethan, the two clash in brutal ballet of explosive fire blasts and soothing rainfall. The final section, which sees a frantic Ethan trying to finish off Heisenberg without the aid of his mechanical upgrades is merely the icing on the cake.