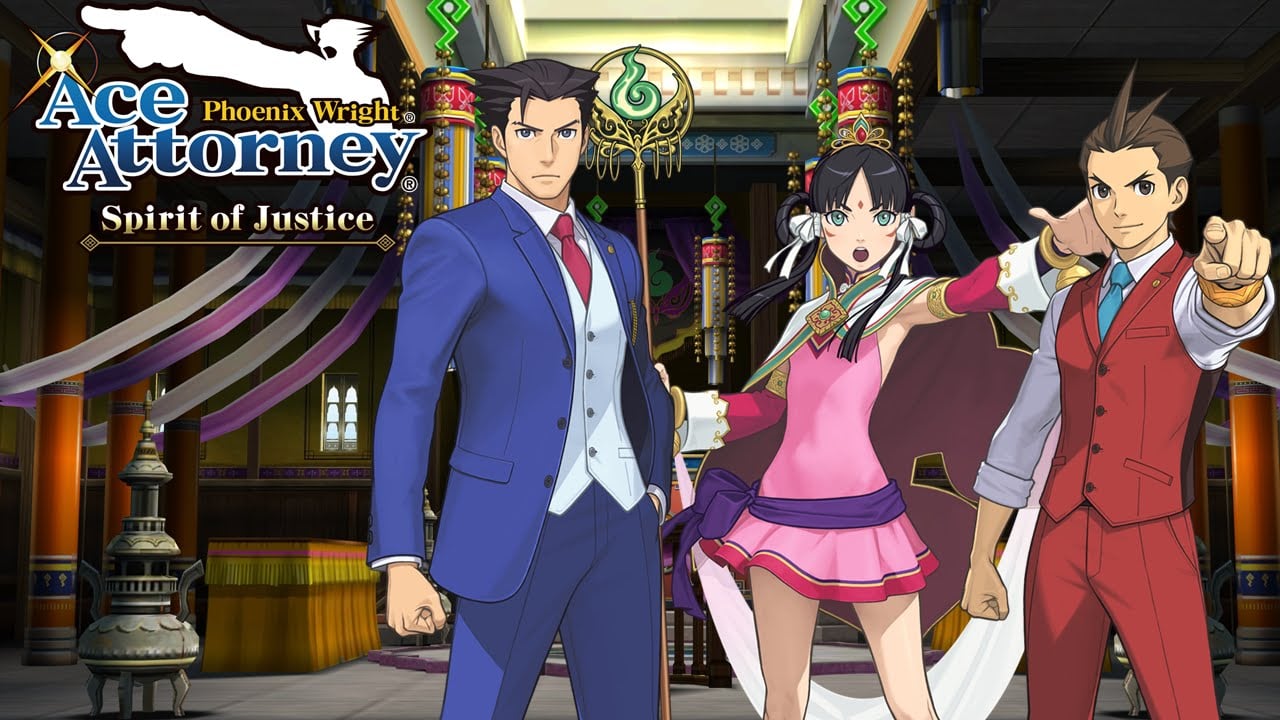 On average, the Ace Attorney games have been about the same quality throughout. Each provides a new set of cases to explore and great new characters to meet. Some games obviously stand out with better examples of these two elements, but all of them are good for their own various reasons. And while Spirit of Justice is no exception to this pattern, it branches out surprisingly far from the rest of the series.

Much like other Ace Attorney games, Spirit of Justice begins with an introductory trial that helps jog the memory and perhaps introduces some story beats that will be important later. This is also where Spirit of Justice starts to show its differences. Phoenix immediately finds himself in a foreign courtroom in the Kingdom of Khura’in with rules that only work against lawyers. In fact, one of these laws — the Defense Culpability Act — states that if a lawyer’s client should be found guilty, said lawyer will receive their same punishment.

This raises the stakes of the gameplay to a whole new level. Since all of Phoenix’s clients are accused murderers, and Khura’in’s punishment for murder is the death penalty, if they’re found guilty both them and Phoenix will be executed. It’s literally a life or death scenario. Also, because a pivotal event in the Kingdom’s past, all of its citizens absolutely despise defense attorneys. Seeing Phoenix cope with these issues adds another layer of interest to his already awesome character. Unfortunately, these off the wall circumstances make the regular court cases seem a little too familiar.

Returning to the states, you play as both Apollo Justice and Athena Cykes — the two other lawyers working under Phoenix Wright. Playing as them, the situations that you’re placed in feel almost like an expansion on the previous game in the series (Dual Destinies). Neither of them have any new abilities, but Athena’s returning Mood Matrix mechanic livens up a lot of the trials, much like they did in Dual Destinies. However, after playing in the foreign courtroom and having to deal with all sorts of new rules, all I wanted to do was return to Khura’in and continue the story. Because of this, the two cases that are set in the U.S. feel almost like filler. While they each provide their own little nuggets of character development, they don’t feel like the main focus.

In fact, the only thing these two courtrooms have in common is the prosecutor, who is definitely the least interesting in the series. He’s a monk from Khura’in that is devotedly religious and has a mysterious past that seems to interweave with one of the major characters. His backstory is constantly prodded at during the first half of the game and is really the only thing likable about him until the very last trial. His “shtick” is that he’s a servant of the Holy Mother and can predict the karma of a trial before it even starts. Though, neither of these ideas really come to fruition. Compared to Simon Blackquill, a death row inmate serving as a prosecutor, or Godot, a mysterious masked stranger that challenges Phoenix’s skill in the courtroom, this prosecutor is nothing special. He feels more like a side note than anything else, which should never be the case in a Phoenix Wright game.

But, Spirit of Justice’s exceptional writing helps fill in a lot of what the prosecutor doesn’t bring to the table. It’s hilarious (as usual) with constant, sarcastic jokes and kind of hard to spot puns. If you see a name that seems a little weird, just say it out loud and it’ll reveal itself as some sort of joke. Take Puh’ray Zeh’lot, a dedicated monk from Khura’in, for example. That one really got me.

Alongside its humor, the writing and story also go over a lot heavier beats than usual. Death is not a new concept for the Ace Attorney games, but seeing series stapled characters being affected by it is pretty rare. But, it’s there and it’s plenty. I even got a little misty eyed near the end, which is mostly due to the writing being so personable and real. I felt for the characters and what they were going through; I respect the writers for making certain personalities be more than just a blip on my radar. The music and visuals also add a lot throughout the campaign. It’s amazing how much effort was put into the characters’ animations this time around. They have particular movements for very particular moments; some animations were only used once throughout the entire narrative, which is incredibly impressive and really helps emphasize the situations that Phoenix Wright and company find themselves in. The music, much like any other Ace Attorney game, is definitely something to adore. With the more serious circumstances, the music conveys some pretty harsh emotions but, it can also be joyous, goofy, whatever fits the bill.

Unfortunately, not all of Spirit of Justice’s audio and video elements are top notch. While Dual Destinies had some neat anime cutscenes, this game brings them into full 3d frequently to some disastrous results. When the characters start to move in these 3d cutscenes, they look decidedly silly. They have stilted, awkward movements reminiscent of old school PS1 FMVs. It makes it really difficult to take anything they’re doing seriously, and the truly cringe-worthy voice acting doesn’t help. Neither of which would be so bad if they weren’t forced into regular moments so often. They feel like a preventable pothole in a mostly smooth ride. The 3d cutscenes may be ugly, but the anime movies are still pretty nice.

Of course, there’s more to Ace Attorney than just the trials. As an attorney, you have the chance to investigate, speak with witnesses among other interesting individuals, and gather evidence. In the first four games, investigating was the most open part of the game, which resulted in a lot of frustration as the player wasn’t sure what to do next or what was required, so they’d end up searching in random places and being generally confused. On the other hand, the fifth game only allowed for the player to search the crime scene itself, but in full 3d, resulting in a faster paced Investigation. But it was less satisfying to complete since the game was hovering over you the entire time.

Neither of these problems are present in Spirit of Justice. When in a location other than the crime scene, the player can search around all they want and find some cool references, new dialogue, and evidence. The difference being, the game will let them know if there’s nothing left to be found or still some required evidence waiting to be obtained. Then, when they actually investigate the crime scene, they can search in full 3d just like in Dual Destinies. It’s a brilliant way to combine the best of both worlds and it essentially perfects one of the biggest annoyances of the entire Ace Attorney series.

There’s also a flashy new mechanic that really spices up the Khura’in trail segments. Known as the Divination Seance, this new mechanic allows the court to peer into the last moments of the victim. While this should theoretically answer all questions, it often only proposes more. It’s up to Phoenix to point out the inconsistencies between the Divination Seance and its description, which results in some extremely mind-boggling twists. The citizens of Khura’in are actually aware of the Divination Seance’s existence, so they work around it and use it to frame your clients. It’s a natural progression for the series, and I love everything about it. 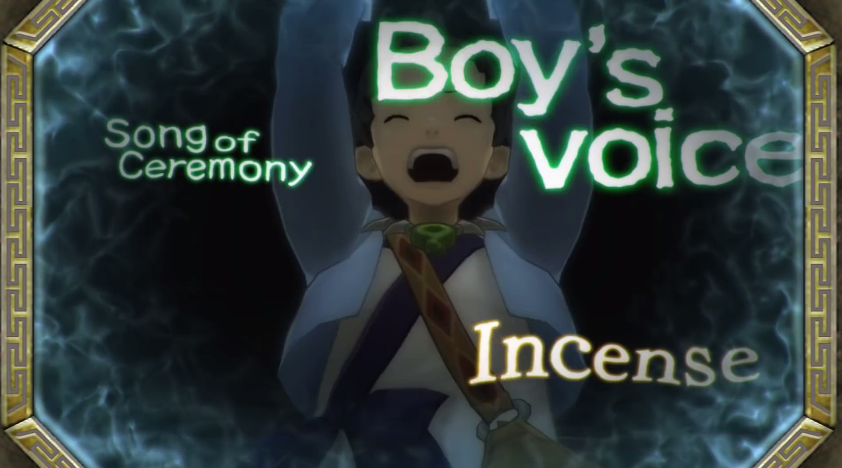 The first Divination Seance, which shows all five of the victim’s senses.

With this new mechanic under its belt, Spirit of Justice feels like a complete package. The new Kurah’inese courtroom is an interesting and varied change of pace. And even though the U.S. cases seem comparatively familiar, they’re still bursting with that Ace Attorney charm. The new prosecutor may be a bit dull, but that doesn’t stop this game from having a tear-jerking conclusion. The investigations are the best that they’ve ever been thanks to the brilliant combination of old a new. And while they voice acting and 3d cutscenes are hard not to laugh at, Spirit of Justice has one of the most emotionally gripping narratives of the entire series.