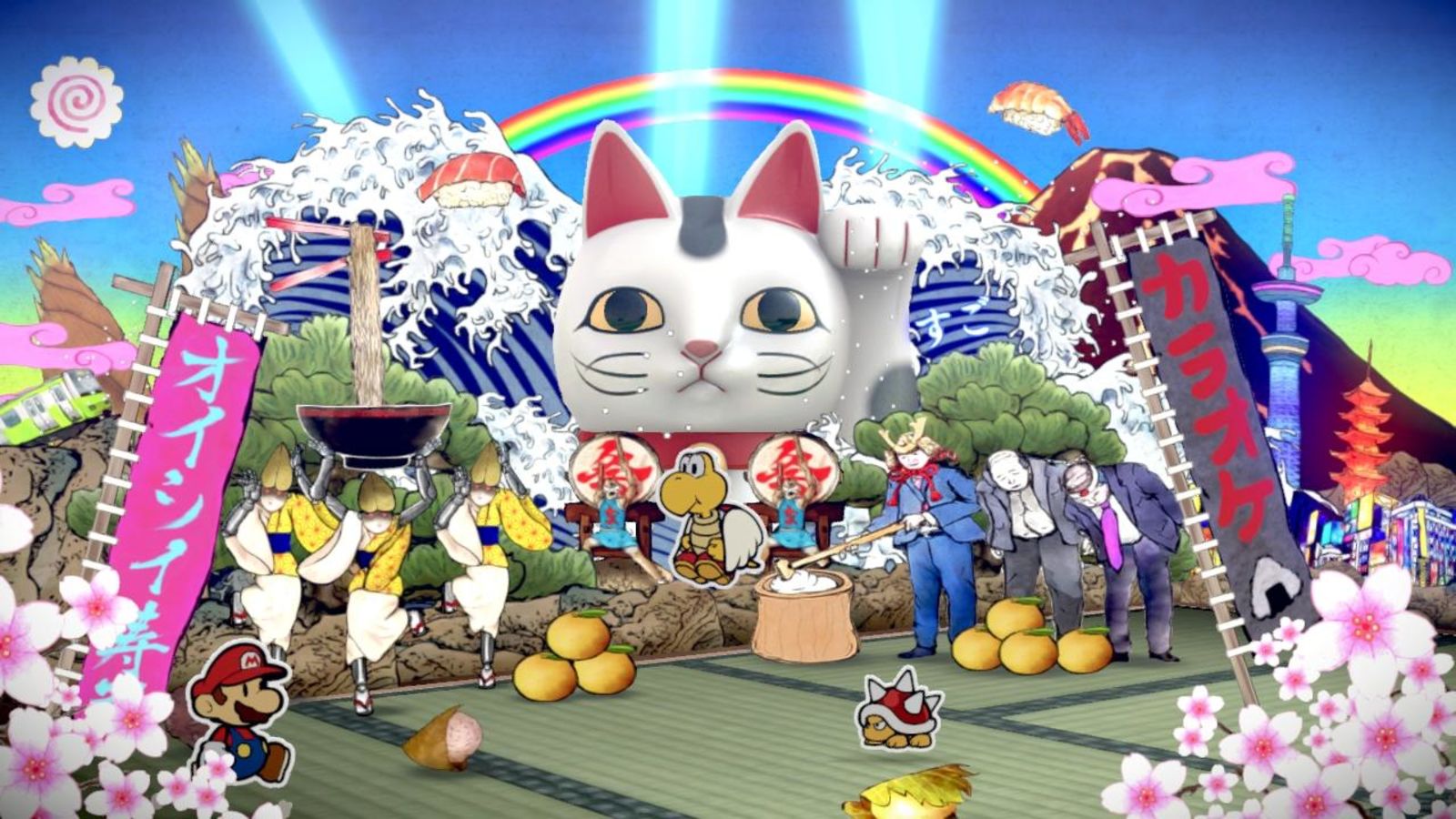 After three years, thousands of angry fan complants, and a whole new console, Nintendo and Intelligent Systems should have realized that only a true Paper Mario game would satisfy their masses. Instead, they decided to stick to their guns and keep with the formula that made Sticker Star (the previous entry in the series) so hated. They had something to prove: that they could make a Paper Mario game as fun and endearing as the original two entries while also delving far away from the standard RPG formula. Unfortunately, Color Splash doesn’t prove their point.

Color Splash has two sides to it, and they’re the same that every turn-based RPG has: an overworld and battles. The former is brilliant. Paper Mario is now in high definition and it looks absolutely gorgeous. Sticker Star had a lot going against it, but its visuals were certainly a plus. Seeing these paper, cardboard worlds come to beautiful, fully realized high definition on the Wii U is nothing short of breathtaking. Intelligent Systems manages to pack each level with countless endearing, paper-craft details. The rivers are flowing sheets of paper, the sun and clouds are cardboard cutouts attached to the ceiling by strings, and the background is completely flat, making it feel as though each level were taking place inside of a giant shoe box. It’d be easy just to sit for hours and notice all of the hand-made nooks and crannies. All of this is aided by a soundtrack that is simply whimsical and surrounds each environment with absolute personality, completing this whole aesthetic package. 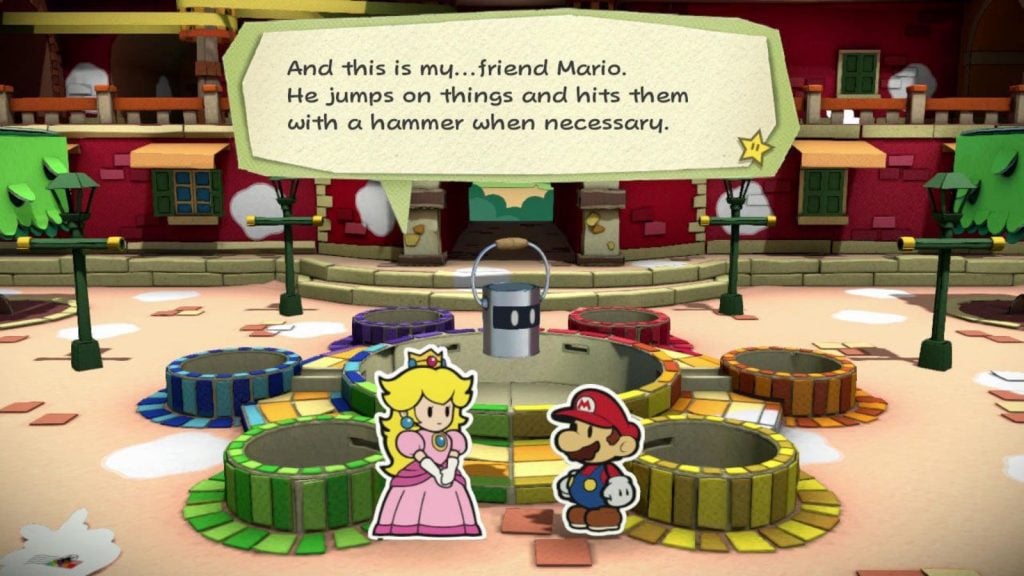 Of course, the environments aren’t much without their inhabitants, and each one you meet will either have you actually laughing or experiencing an existential meltdown. The folks over at Nintendo Treehouse really knocked it out of the park this time, as every word slipping out of every NPC’s mouth is genius. Despite the fact that practically every NPC is either a toad or a staple Mario enemy, they all manage to be either wholly unique or just good for a laugh. Yes, this writing may be the best in the entire series, even trumping the original two. It’s what kept me going throughout this journey. It feels similar to the humor found in Pixar and Disney movies, as certain elements are specifically catered towards adults. While the visuals and setting are certainly more child-friendly, some of this dialogue could never be understood by anyone under fifteen.

Sticker Star is bashed for having practically no story, and Color Splash slightly improves in that way. The story has an actual effect on the levels. A lot of Prism Island’s color has been drained, and it’s up to Mario to fix it, so while exploring you can repaint certain spots for bonuses. This is essentially the overarching theme, so a lot of the side quests usually have to do with repainting something or someone. Prism Island is amazingly established as well. Plot threads here and there connect to elements 10 hours later in the game, fleshing out the world and making it feels like a completely cohesive journey. 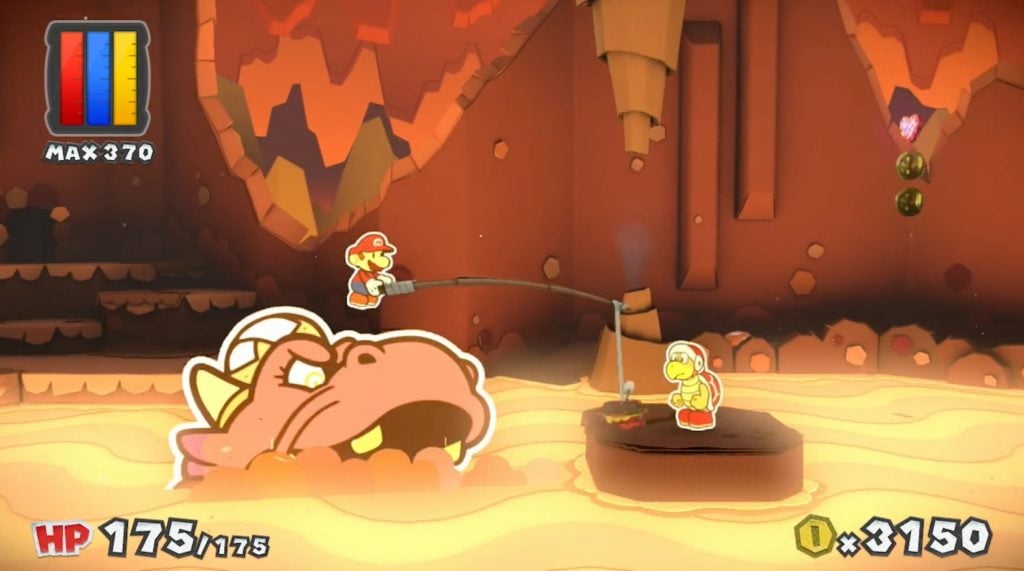 Unfortunately, these are the extent of Color Splash’s good qualities. As mentioned earlier, it has two sides: the overworld and the battles. The battles are what make this game so agonizing to play. They’re absolutely broken.

The problems stem from the consumable actions. Once called “stickers” and now known as “cards,” these consumable actions are exactly what they sound like. As soon as the player performs one of them, that’s it. That specific jump, hammer, fire flower, whatever card is gone for good. Clearly, this decision was made with strategy in mind, forcing the player to plan ahead and  use whatever cards to finish the battle as efficiently as possible. But little strategy can be set forth when the enemy up next is completely unpredictable. They don’t know whether or not to hold onto that hammer card just in case it’s the next enemy’s only weakness or use it because their only alternative is a jump card that may be needed for an entirely different enemy.

Then there are the bosses: each one has its own little trick and can only be defeated by using a specific Thing Card that can be found throughout the overworld. Luckily, a Toad can be found who will drop hints as to what Thing Card the player needs and where to find them. This is an improvement over Sticker Star, where the player was forced to wander aimlessly until they came upon the Thing that they needed. Though, this toad can’t help in one area: when during the boss fight to use the Thing Card. As stated earlier, if the player uses a card it’s gone for good, so if they accidentally use that crucial, necessary thing card at the wrong point during the battle, they have to reset and start the entire thing from the beginning. This can lead to some extremely frustrating moments and definitely hampers a lot of the cooler boss fights. 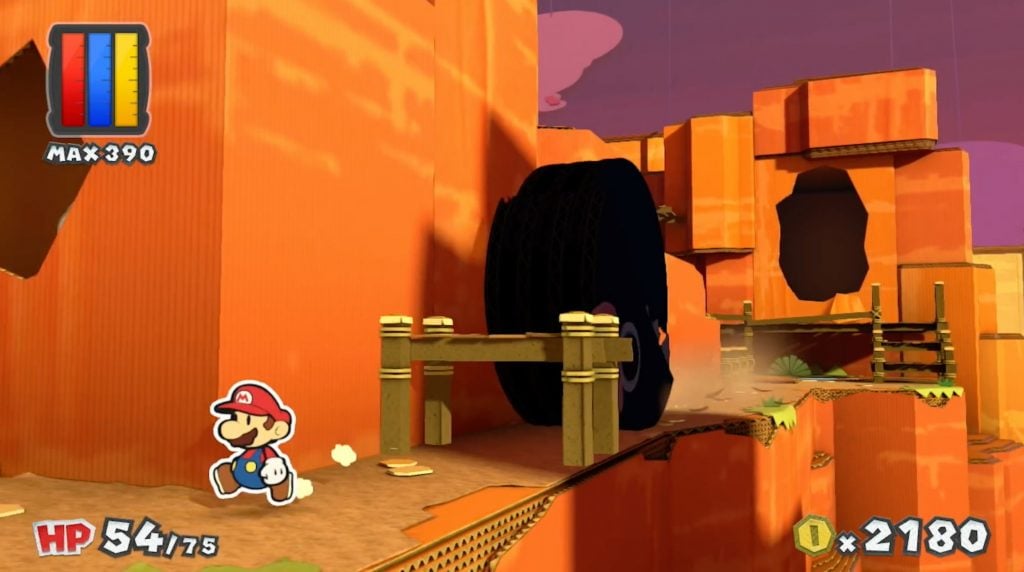 Color Splash tries to fix this battle system in four ways. The first being the hint Toad mentioned earlier. The second being the expansion of the number of maximum cards the player can hold. The player feels pressure to hold as many stickers as possible in the last game. Color Splash is no different. Even though I could hold 99 cards from the get-go, I still wanted to save every card I came across, meaning that getting into battles was generally frustrating because I had to waste precious cards. In the case of Sticker Star, practically nothing was earned from battles since there was absolutely no EXP, and Color Splash’s attempt at fixing that is fruitless.

This time around, enemies drop upgrades which slowly increase the maximum paint that can be held. Paint is used to power up certain blank cards, so this sounds like a worthwhile solution at first. But, about halfway through the game, I noticed that paint mattered less and less by the minute. Because there are so many ways to earn coins (hundreds can be obtained in the environment, as the prize for winning Roshambo tournaments, or from defeating enemies), it’s easy to buy the pre-painted versions of these blank cards. At this point, I had increased my paint levels to a maximum of three hundred, so I never actually ran out. Items to refuel paint are abundant and paint droplets that fill up the gauges are everywhere. The point is, paint doesn’t matter. And because paint doesn’t matter, Color Splash’s replacement for EXP doesn’t matter, and consequently, battling doesn’t matter.

Finally, Color Splash‘s fourth attempt at fixing the system: the battle spinner. This allows the player to semi-randomly select from an assortment of cards in a slot machine-like fashion. They also have the option to slow down the spinner and flip the cards over, at the cost of some extra coins, basically allowing them to choose their card. This is meant to help the player in case they run out of cards or just don’t want to use one that they’re saving. Keep in mind that because of the huge amount of cash thrown at them, they should have no problem just paying extra and choosing their card. So, if the player is allowed to practically select their next action without really losing anything, why not just import a regular battle system? There’s no point in having these consumable actions when they have access to nearly limitless cards during battle. Granted, the battle spinner can be used once per turn, but often it will have a Thing Card that can wipe the entire field. There’s no point to it!

Color Splash was admittedly close to proving what Intelligent systems wanted, but it failed. It only proved one thing: this essentially broken battle system can never be fixed. Sticker Star didn’t need a fresh coat of paint, it needed to be thrown in the trash.