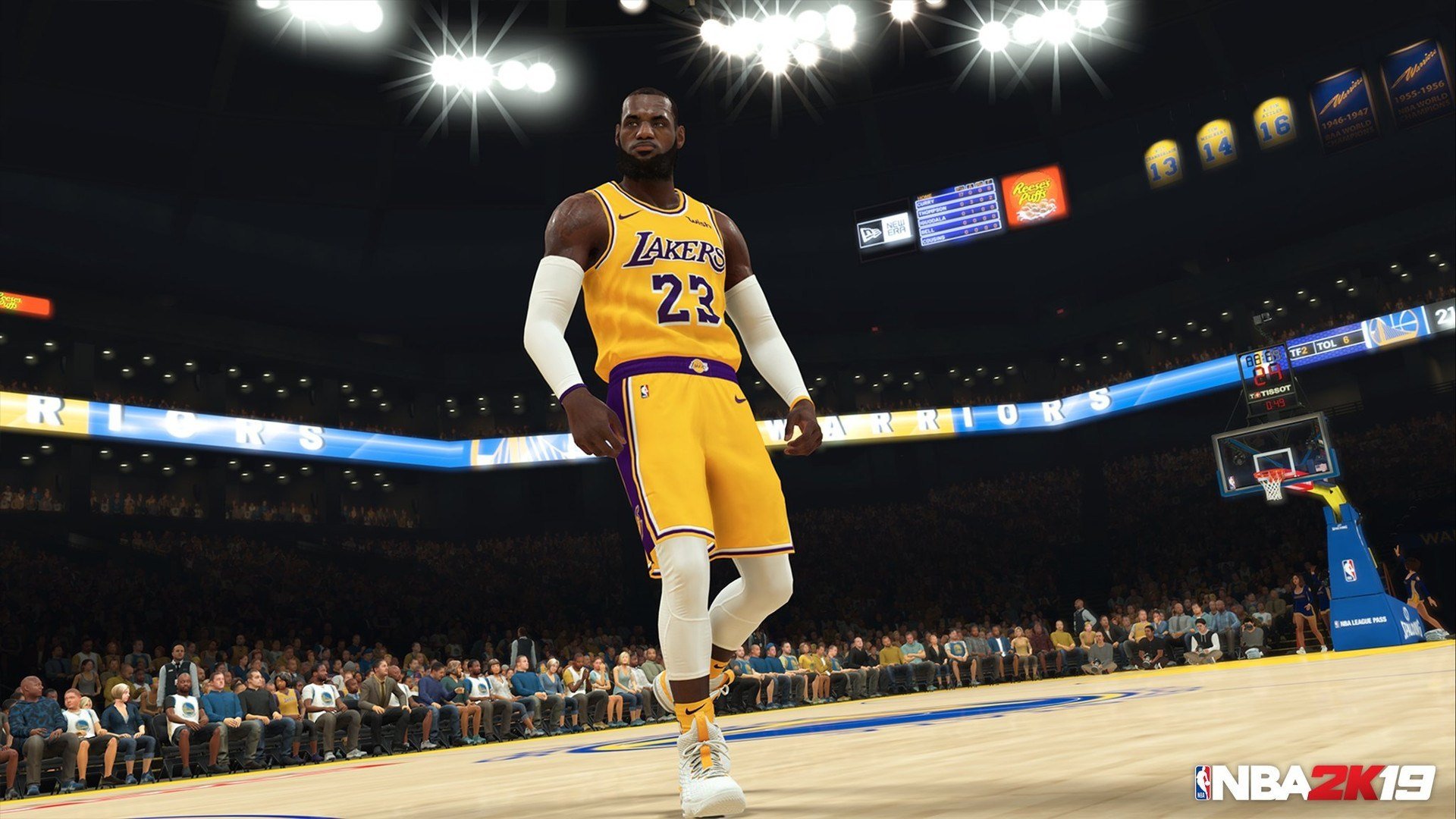 By now, you figure there wouldn’t be much to add to the conversation when reviewing the latest entry in the NBA 2K franchise. Not only is it one of the most critically acclaimed video game series of all time (not to mention a series that has had a stronghold on the video game basketball market for nearly two decades), but little has changed with the brand from one installment to the next. Year-in and year-out, the 2K games have almost always delivered a level of quality that no other sports series has come close to matching, and in this critic’s opinion, the NBA 2K series is the only viable option for fans seeking out a game that is well worth your hard-earned money (sorry NBA Live).

NBA 2K18 is a game we called great, but also incredibly frustrating. Putting aside the atrocious myPlayer campaign and overall reliance on microtransactions, what really bothered me was the actual gameplay and the disappointing MyCareer mode that the game offered. That’s not to say that game isn’t good (read our review) but it was a step down from NBA2K 17, arguably the best entry in the series by far. Thankfully Visual Concepts was determined to correct some of the problems that befell last year’s edition. NBA 2K19 is not without its fair share of problems but it is hands down, the best basketball game on the market, a triumph of style and simulation, and a game loaded with plenty of content to keep you busy until next September.

NBA 2K19 features its strongest MyCareer mode yet with the aptly titled, The Way Back, a fascinating look at the culture behind college basketball recruiting. The story puts you in the shoes of a somewhat arrogant young baller nicknamed A.I. (not to be confused with Allen Iverson) who leaves college early for the NBA draft, only to have his dreams crushed when he’s left undrafted. Despite having enormous talent, A.I. still has a lot to learn before he will ever get a chance to play in the big leagues. With few options available to him, A.I. makes his way to China to play for the Shanghai Bears hoping his time there will catch the attention of an NBA scout.

Written by Adam Hoelzel and directed by Christian Papierniak, The Way Back gives players plenty of reasons to remain invested with several unexpected plot twists and a journey that takes A.I. from the East to the West where he gets a spot playing for the Mad Ants, the popular NBA G League team located in Fort Wayne, Indiana. There are plenty of colourful characters you meet along the way including Corey Harris played by Aldis Hodge (A.I.’s former college teammate), Zach Coleman played by Haley Joel Osment (a backstabbing social media guru) and Coach Stackhouse played by famous character actor, Michael Rapaport who steals the show despite only having a few scenes. The Way Back even features a love interest played by Meghan Lennox who doubles as a famous sports writer as well as a few villains – the most memorable being Marcus Young (Mo McRae), A.I.’s teammate who will do anything in his power to get what he wants. The Way Back is a well-scripted, finely acted coming of age tale about a young man who starts out as a self-centered, incredibly selfish brat who overtime must overcome his biggest obstacle – that being his overall attitude to both the game he loves and the game of life. The Way Back also doubles as a heady dose of the American dream and the American nightmare combined as it unfolds as a true-to-life investigation of how one turnover, one bad pass, or one missed basket can make all the difference in a player’s fortunes. And it isn’t just about the decisions A.I. makes on the court but also the decisions he makes in his everyday life. Featuring an RPG element that allows players to choose between certain actions and decisions, players are able to craft a personalized journey and shape the outcome of A.I.’s destiny. For example, at the end of the regular season playing with the Mad Ants, A.I. must decide if he should pass the ball as often as possible to his arch-nemesis Marcus Young and win the game for his team, or, steal the spotlight and score all the baskets knowing full well the Mad Ants will not only lose, but Marcus would find a way to get his revenge.

Visual Concepts continues to set the benchmark for sports titles

Despite the short five-hour running time, The Way Back is an incredible achievement that conveys the fabric of modern American life, aspirations and incidentally, sports, in close-up and at length. After several ups and downs, “The Prelude” culminates with A.I. negotiating a deal with a club of your choosing (of course I chose the Lakers). By the time A.I. has finally achieved his goal of playing in the NBA, he’s accomplished more than just a career – he’s become a better person getting there.

MyCareer doesn’t just get by on the story, however; some quality changes and welcome new additions help make the story mode far more enjoyable than its predecessor. This time around, you’re able to skip the cutscenes (although I’m not sure why you’d want to) and the revamped Neighborhood is drastically improved thanks to the design, variety and more refined navigation. Included are easily achievable daily bonuses, flexible endorsement contracts, tons of minigames to participate in, and a layout that sidesteps the endless walking 2K18 forced you to do. The biggest highlight, however, comes during the “Prelude”, when A.I. and his college friend visit an arcade that just so happens to feature the original 2K game. Taking a page out of Uncharted 4, MyCareer then lets you play that original 2K game in a match between the 1999 Houston Rockets and the Boston Celtics. All in all, MyCarrer is of course only one piece of the overall experience but it is hands down the best addition to the game.

There’s so much to write about when reviewing NBA 2K19 – from the Blacktop mode (that includes half-court street basketball) to the updated roster, to the classic NBA teams, to the colorful commentary (welcome Bill Simmons), to the incredible soundtrack, and even MyLeague, which allows you to build upon an NBA franchise with a dazzling amount of customization. But of all the improvements and changes this time around, it is the new gameplay additions and tweaks that are by far its most impressive component. NBA 2K19 has a tougher learning curve when compared to all of the entries from the past, something which prevents you from easily pushing towards the hoop thanks to a much-needed improvement on defense. Even as a veteran of the series, I found myself getting destroyed by the CPU. It takes some time getting accustomed to the advanced controls but in the end, you’ll appreciate how the game forces users to be smart on the court.

Needless to say, 2K Games is pushing its affection for realism and I doubt you’ll find another sports game in which the A.I. behaves so realistically. Furthermore, the new “takeover” mechanic gives players the opportunity to raise their attributes within several distinct categories – something that makes you think more carefully about your choices on the court as your performance can hurt the number of attribute points you are rewarded after a match. For example, if you want to focus on boosting your passing skills, you’ll want to make sure you not only pass the ball often but avoid any turnovers. Once the game has ended you can trade in your “currency’ and raise your skill level as you see fit. My only major gripe is the speed of the transition game. After playing the aforementioned original 2K mini-game which features controls that are both fluid and smooth, it became clear just how sluggish the 2K gameplay has become. Apart from that, the character models and faces are somewhat awkward. Lebron James, for example, doesn’t look like James and the animation at times leaves much to be desired.

As the reviewer, I should state that I have no interest in dabbling with microtransactions nor do I care to play online. Over the years I’ve spent the majority of my time with the 2K series playing with my family and friends. That said, one of the biggest strengths of the game is that it offers something for everyone, even if that means you for some reason are a fan of its aggressive monetization tactics and choose to spend your hard-earned cash and pay to win. Apart from that, NBA 2K19 is a must for any fan of the franchise. Visual Concepts continues to set the benchmark for sports titles leaving me wondering just what they can add next year.